How to Survive 40k When You’re a Bad Luck Brian

Hello all, Rawdogger here to talk about being successful in competitive 40k when you’re terrible at rolling average dice.

By now, those of you who have followed Frontline Gaming since the company began way back when have come to know of my unfortunate bad luck while playing Warhammer 40k.  In fact, people have even begun to reference ‘Rawdoggin’ rolls when the dice are rolled and an unbelievably bad result occurs.  I’m talking rolling 4 1’s on 5 dice when making Terminator saves.  Despite my 5 year string of bad luck playing Warhammer 40k I continue to try and play the game and do the best that I can.  Over the years I’ve come to accept the dice going sour from the first armor save of the game and I’ve come up with a couple ways to try and mitigate the furry of the dice gods that I seem to have somehow incurred. 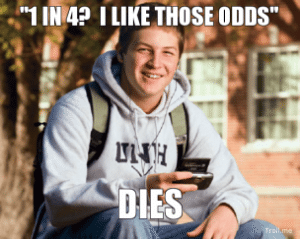 Twin. LINK. EVERYTHING – The first thing that I do when writing a new army list is look for ways that I can get a re-roll when making my dice rolls be it a wargear item or a psycher with access to Divination and that sweet, sweet Prescience.  Oh, what’s that dice gods?  I only hit twice on 10 dice?  FUCK YOU TWIN LINKED ALL DAY, SON.  Dark Angel allies or the most popular Inquisitor in school Coteaz are both good Imperial allies for Prescience.

The Feel No Pain Train – The same idea goes for trying to make saves.  I know that if I am running a death star dependant on 2+ saves, I’m going to be rolling 1’s all day long.  If there is a way to get another roll I’m all over that.  Maybe let’s get a Blood Angel Sanguinary Priest to attach to that death star?  Iron Hands might be a good choice since even a 6+ Feel No Pain is enough to throw off the dice god’s fate. 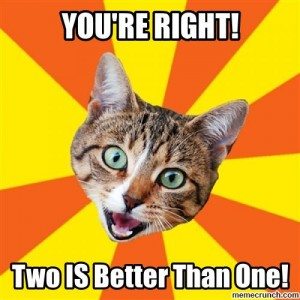 Be Greedy –  When you know the Predator you took is going to get blasted off the board with the first Lascannon shot of the game, you start thinking about taking multiples of EVERYTHING.  Since your Terminator squad will most likely mishap and then be taken out of the game with a 1, you’ll need to bring a couple more. I always take two of something if possible and look enviously upon those like Reece Robbins who are smiled upon by the dice gods and bring a single dakka Predator and it kills a Wraithknight somehow.

Boy’s Night Out! – Something that has been hard for me to accept has been the fact that I will never be able to play a small, elite army.  I watch other people blast their opponents’ face and chest with a Draigostar and sadly think to my past games trying to do the same thing only to remember the Dreadknight taken out by Kroot Rifles and Tigurius periling and being removed from the table turn one.  One way to mitigate these issues is to emulate a Frontline Gaming party and bringing more dudes.  I’ve started leaning towards blobbed up Astra Militarum lists or mass Tactical Marine armies.  When your luck guarantees that you’ll be failing 80% of your armor and jink saves 70% of the time you quickly learn that the more bodies you have on the field the less you die a little inside when losing a high costed unit to bad luck.

So those are just some of the ways I try and cheat the dice gods when playing 40k.  What are some of your tips and tricks for those of us cursed for eternity to be rolling all 1’s?