Update From the Guardian Cup

You are here: Home › 40K › Tournament report › Update From the Guardian Cup 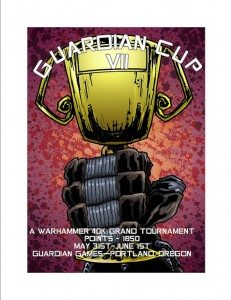 Reecius here checking in from the Guardian Cup!

Day 1 of the event was a great time. Guardian Games in Portland is an absolutely amazing game store, one of the best I’ve ever seen. it is huge, clean, well stocked, and it has a bar! What more could you ask for in a nerdvana? This is my first time to Portland, too, and this is a cool city. Hipster central for sure, but beautiful and green and full of interesting people. I like it here, for sure.

At any rate, the 40K event has been well run and smooth, with a lot of tough lists. Team Zero Comp is out in force and Grant Theft is leading the pack with his Seer Council and Wraithknight list. He beat me (I’m playing my Space Marine Scout list) round 1 despite me killing off all his troops, but unfortunately, his warlord was a scoring unit and took my home base from me.

I unfortunately had to play 2 Zero Comp team mates in 2/3 games today, GTA and Spam Adams with his Triptide Tau. It always stinks when you travel and play a buddy, but hey, that is the way it goes, sometimes. I can also say, I will not in any way be missing Riptides with characters attached, lol! Adam and my game ended up in a tie as I just couldn’t chew through the dang Riptides with character support, and with them ignoring cover and being twin linked, I was picking up a unit per turn per Riptide. Good riddance to that combo.

I changed my list a bit to bring Lysander thinking he would be tougher than my usual Libarian that tended to give up Warlord too easily. However, Lysander died to his first 4 wounds 2 games in a row! Lol, all 1’s on armor saves, all day! He hasn’t even swung his hammer yet, it’s been pretty amusing.

Frankie knocked Jeremy V. (the French Overlord) out in round 1 but then went on to lose a game to an Eldar player that Seized the initiative on him. InControl is also 2-1 liek Frankie, and Raw Dogger is 1-2 with his IG.

In all, the event has been a lot of fun and a great way to send off 6th ed. I will have more updates, tomorrow!

← Signals from the Frontline: Warhammer 40K and General Gaming News, Rumors, Tactics and Comedy!
The Guardian Cup is a Wrap! →

16 Responses to “Update From the Guardian Cup”