Guest Editorial on The Deathstar – How big is it, and does it have an exhaust port?

You are here: Home › 40K › Editorial › Guest Editorial on The Deathstar – How big is it, and does it have an exhaust port?

Most things in 40k have a points value derived from a source book. There seems to be several aims to this: the value needs to be simple, it needs to be relatively uniform, and it should ideally be proportional to the benefit it gives you to winning the game. In theory, units with similar costs and “rarities” (ie limitations on prevalence) and similar intended uses, should be roughly comparable in terms of capability.

Now these aims in themselves, expose some weaknesses. A power sword at 15pts, isn’t worth as much to the army in the hands of a veteran sergeant (or suicidal champion if you play chaos) as it is in the hand of something like a Chapter Master. At the very least I think we can all agree that 4 attacks > 2 attacks, leaving aside initiative, weapon skill, survivability, and potentially speed.

And it would be a pain in the arse, to have to look up a three dimensional table of WS, Init and Attacks to work out how much your power sword costs. The last time items had variable values (that I’m familiar with) was the 4th ed chaos codex, which had prices for HQ choices, and prices for aspiring champions separately.

We might suggest, as a vague model though, that if a power sword is worth 15 points to a chapter master, it might be worth 10 to a vet sergeant (not half, that is a subject for another post on general game design perhaps).

The result, is an incongruity between the codex value of an item, and the real-world value of that item. Now the power sword isn’t a terrible example – so maybe you don’t pick power swords on veteran sergeants, and if you do that’s a few less melta bombs around your army than it should be.

What are some of the biggest incongruities in 40k? Well it turns out that I’d argue one of them is the seer council death-star.

The eldar have some terrific force multipliers in their codex, but having force multipliers means that giving them a fixed value is extremely difficult. The price for a warlock is the same if it’s in a guardian squad, a bike squad, or a squad of warlocks. Now lets reduce the variables in play, and examine only the ability to boost survivability.

1. Guardians – You are the only warlock in play in a squad with crap armour. You will choose either conceal or protect. This warlock is probably a good buy.

2. Jetbikes – You are the only warlock in play in a squad with good armour and a jink save. Both the options protect and conceal are going to boost this squad significantly. Almost a must-buy if this unit is going to see any type of combat at 15pts more than the basic guardian warlock.

3. Seer Council on Bikes – You are one of many warlocks in play, in a squad with good armour and a jink save. You are going to get protect, you are going to have conceal, and with those two factors combined the unit is starting to look pretty tasty. It’s arguably good value at this point.

Time to turn it up to 11! Farseer time, and make it a double.

For the cost of two guardian warlocks, and one bike warlock, you get a bike farseer. It’s got three wounds, it gets access to new powers, and with two of them you pretty much guarantee getting Fortune. The farseer costs the same points, no matter how good your best unit is. The farseer also costs the same, no matter what powers you get. So arguably, if you build a list around one uber unit, and around getting 6 chances of getting on particular power, then you are acquiring an amazing combination for a great price!

This chart is derived from rolling the shots of millions of bolters at the target unit, and seeing how many get through. I haven’t done this in binomial math, because it’s too early in the morning for that, and we don’t need the precision. This is just to highlight the benefits. The end result of this process, is referred to as a conversion rate. What proportion of our bolts got through? This gives a value of close to 1 percent for the seer council, when normally you’ll be used to values of 3%. Our percent conversion for the seer council includes the drop out you get from failing to hit and wound. Let’s put that in a direct context of material cost by assigning points value to each shot taken. I’m going to assign each shot 7pts of cost, derived from back of the envelope calculations on the cost of acquiring a space marine vs the number of shots they are likely to get off over the course of the battle. 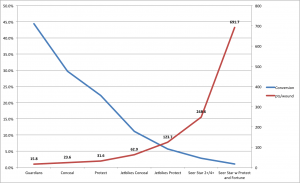 So, it costs you 15.8pts of space marine value to inflict a wound on a guardian squad charging towards the unit. Conceal bumps it up, and protect even further. The seer council is a jaw dropping 691.7pts with protect and fortune. So using bolters against this unit, is suddenly massively out of proportion to the value of one wound. This is because of the multiplicative effect, of stacking force multipliers.

So, the seer council is hard to kill with bolters. Slow clap for the Australian who just worked that out, right? Well, while that’s true, we can just as simply apply the model to other weapons systems and see what happens. I’m using a range of heavy supports as a test-bed, and the problem with heavy supports is that unlike space marines, they are likely to be picked off. So that’s going to mean that my estimate of how much shooting they can achieve drops. Thus their cost per shot is going to be higher than for the base marines. So I divide the cost of the unit, by the number of (significant) shots from the unit, divided by the number of turns I think they’ll get to shoot. I’m dropping it to 1.5 turns for heavy supports. 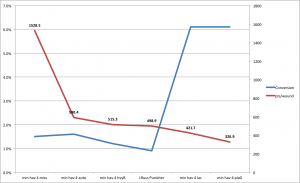 You’ll notice that conversion and cost no longer correlated, because each option has a different cost per shot. Now in defense of the lascannon and missile launcher, those wounds can’t be soaked up by multiwound models but 6% conversion on shots means you are going to need an astronomical amount of them. Putting that into some kind of useful context, it may mean you expect 600+ points of min-max lascannon havocs, to deal two maybe three wounds to one of these deathstars.

For more or less the same cost as the farseer you add the baron to the mix. He is a battle brother to the eldar and therefore can join the unit (and keep up thanks to his speed). If he’s placed in harms way, then each time a shot is taken against the unit, he can choose to either take the hit himself on his 2++/2++ rerollable or he can palm it off on a 2+ to the nearest member of the squad with look out sir. Suddenly, it just got harder again!. 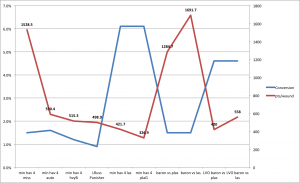 So, I need 1700pts of lascannon havocs to kill the baron reliably, I hear you ask? Well, sorry but no! Unfortunately we fudged the cost per shot with a 1.5 “turns” multiplier. Which has two effects, it means you probably need 1700pts, and what’s left of that 1700pts in turn two to do it quite reliably, or that figure probably approximates a rough “evens” chance of taking him down on turn 1.

Now, the FOC prevents us getting this many lascannons. Further, they may deploy out of sight, then turbo boost, then get into combat.

Now we start to illustrate the problem. Even an idiot (as long as they can place the baron effectively) could probably use the baron in an effective way. The sheer weight of firepower this unit can weather, means that it will and can have a disproportionate effect on the battle. It has the best armour save possible, a great cover save just for moving, and it’s invulnerable saves mean it’s literally tougher to kill than a thunderhammer + storm shield unit. But it combines this, with incredible speed, some shooting, and potentially a pile of debuffs as well.

What this tells us, is that this is an extreme edge case. This combination was probably completely unintended. The linear +1 to armour saves, combined with the massive boon of rerolls means that the static cost completely falls down. Warlocks, within a seer council should cost more than warlock solo. Farseers combined with units with access to 2+ armour and/or 2+ invuln saves, are worth more than Farseers that are buffing aspect warriors. At the moment, 40k has no mechanic to fix this issue. So it falls to the community to do so instead. This build was involved in the winning list at the LVO, and even with the LVO changes these units are super-hard. That reduction from 2+/2+ to 2+/4+ takes this unit from such an impossibly tough nut to crack, to simply a very very very difficult nut to crack. But at least these wonder weapons which are in limited supply (thanks FOC!) are better options from a points perspective, than simply throwing more bolters at it!

So, the exhaust port turns out to be a couple of millimetres wider than the torpedo, and the LVO rule at least expands it from 1.5mm to 4.5mm. 😛

But this is a band-aid. Fundamentally, the deathstar is here until it gets FAQd. And it underscores on of my complaints about 40k, the inability to follow good game design. The terminator is a great example, it’s well designed. Now before you press your caps lock and go to town, let me explain what exactly I mean. The terminator is well designed, but it falls victim to units and options that aren’t well designed. The terminator costs more, compared to a space marine than the benefit of it’s armour in raw terms. When used well, in an ideal environment, the terminator can earn that back and be a major pain. Good game design, is allowing someone to specialize in one area (such as protection) at the cost of other areas, and with a ramp-up in resource (points cost). Making a unit as good as another unit, and twice as tough, might mean pricing it at more than twice the cost. The problem with terminators is that 40k has a LOT of AP 2 stuff, and not much AP 3. Even the mini-rends that shuriken catapults get are AP2.

How does this relate to the seer council? Imagine in your head, a fair cost for a unit that soaks up a firing round of 1700pts of firepower for the first wound, and then drops to a mere firing round 400 – 600 points per wound after that? The fair price would be astronomical to balance the massive specialization.

No-comp 40k is kind of like free market capitalism, and in this tortured metaphor the Seer Council is a huge monopoly. It’s likely that any “fix” to this situation will be applied via GW releasing a new, bigger monopoly, or ramping up the anti-psyker gear available to future codexes. That or they could let Tyranids ally, so we can make use of their anti-psyker powers.

32 Responses to “Guest Editorial on The Deathstar – How big is it, and does it have an exhaust port?”