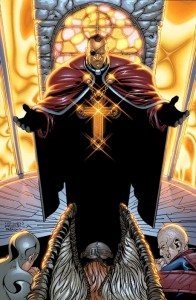 Chaplains are up on deck for review. As always, check out the Tactics Corner for more in depth articles and battle reports.

Chaplains have risen and fallen over the editions in both power and utility. Their zenith was in 4th ed, when they were so good there was no reason to ever take a Captain over them. Since then they have been reduced in individual power but their buffing effects have increased to what we have now: a moderately powerful combat character that also moderately enhances a unit that they are attached to. They are though quite the bargain, weighing in at a Thunderfire Cannon minus 10 points.

But wait, there’s more! Not much more, but yes, there is more. He’s a bargain HQ, at his price point you get a middling stat line (Space Marine Vet Sarge with LD10, and +1 W and WS) but some solid kit: 4++ and Power Maul and he unlocks the Command Squad. Not bad at all. Zealot is also a really nice bonus.

As for applying him on the tabletop, again, it is very straightforward. He is going to give you maximum benefit from his abilities by placing him in an assault unit were Hatred (rerolls to hit in the first round of assault) is going to reap you the most impact for his points. Fearless also helps to mitigate morale as you will be sticking to an objective or in a fight to the last man. That can be a bad thing when you don’t want to be there, but usually it is a benefit. It also precludes you from going to ground which can be crummy when you are trying to hold an objective and are getting shot at.

Hammernators, Assault Squads, Honor Guard, Sternguard, etc. all really enjoy the buffs the Chaplain brings. He allows them to do what they already do, more efficiently. Rerolls to hit statistically are better than adding an attack for almost every assault unit in the game. In other words, you will end up doing more wounds to the enemy with rerolls than with an extra attack…but hey, take both where you can! Pedro or a Chapter Banner really brings the pain with a Chappy in tow.

As for equipping him: keep him cheap. T4 with 2 wounds is not that difficult to take out, and with only 2 attacks base, points invested into better weapons for him won’t yield you as much efficiency. His standard kit is plenty good for what he will be doing 90% of the time. While snagging that Power Fist not only looks cool but gives you a lot more utility, as a Specialist Weapon, it doesn’t mesh so well with your Power Maul and it is pricey. Same goes for Termie Armor. Looks amazing, but unless you frequently plan on Deep Striking as a part of your game plan, it’s a lot of points to pay to gain a 2+ but lose grenades, the ability to Sweeping Advance, and an attack due to swapping the pistol for a storm bolter. A Jump Pack or Bike, possibly a Combi Weapon and the occasional item from the Special Issue Wargear sections are really the only options you should consider, if any. Keep him cheap and efficient, let the unit he is with do the work.

The only real question for the Chaplain is why to take him over the other HQ choices? Besides his slick Skull Mask, he really isn’t a generally good HQ choice. The Captain and Chapter Master fight much better, the Librarian is more flexible, the special characters all bring some cool abilities to the table. The Chaplain’s only real advantage is his low points cost and his specialized buffs.

For me, you take him when you have a very specific unit you want to hit with maximum impact that you have already invested a lot of points into. Honor Guard Assault Terminators in an LRC, an assault Biker Command Squad, etc. These units are pricey and you really need to maximize their impact to get your money’s worth for them. Adding a Chaplain in these types of units to give them that overwhelming punch on the turn they hit is not a bad idea and he also ensures they don’t fall back at the wrong time with a flubbed leadership test. For example, 7 Hammernators or 10 Honor Guard with the Chapter Banner are units that when you toss a Chaplain in there go from powerful to devastating. Even when taking casualties to enemy assault units that swing first, the rerolls from Hatred help to ensure you pack a powerful counter-punch.

However, as I have said before often and loudly, MEQ stat-line assault units are quite simply inferior to xenos assault units on a point for point comparison. Therefore, building a Space Marine assault army will often leave you flat and as the Chaplain plays best in that type of army or those types of units, his usefulness diminishes along with theirs. As stated above, there are only a handful of Marine units that will almost always be useful in an assault and if you do want to use one of them, then a Chappy isn’t a bad choice but as with so many other characters we’ve reviewed: will often fall flat in a comparison to what you could take in HQ for Marines.

Annnnnd, that’s about it! Haha, he is just a very simple, straight forward model to use. As for some other fun little ways to use him pertinent to a few Chapter Tactics: