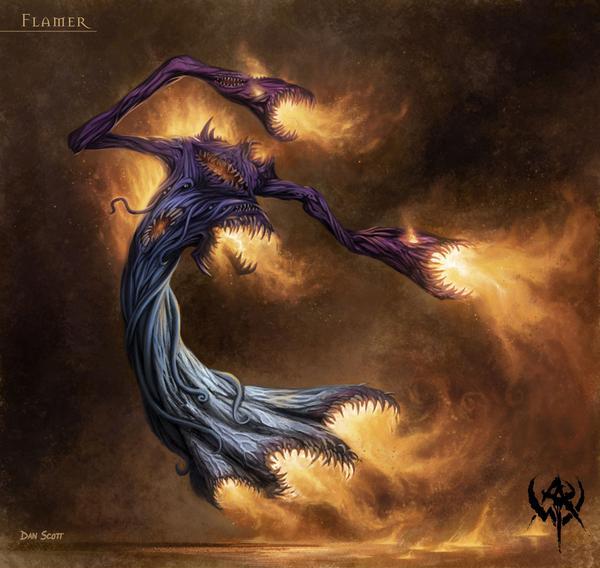 My friend Brian and I had been planning a one day campaign for a couple of months and played this past weekend. I finally had the time to write the batrep for the first game.

You can find the rules for the mission here:

Battle in the Eye of Terror Mission 1

You can find the two army lists here:

Here are a couple pictures of the battlefield: 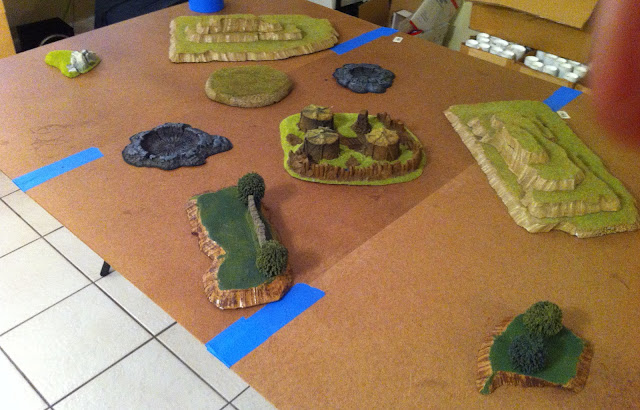 Here is my army: 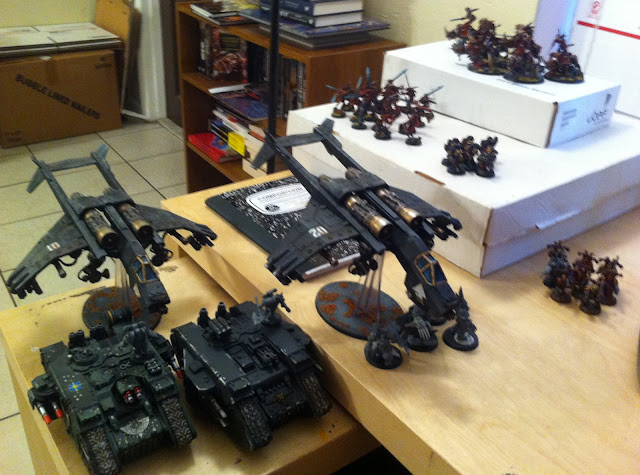 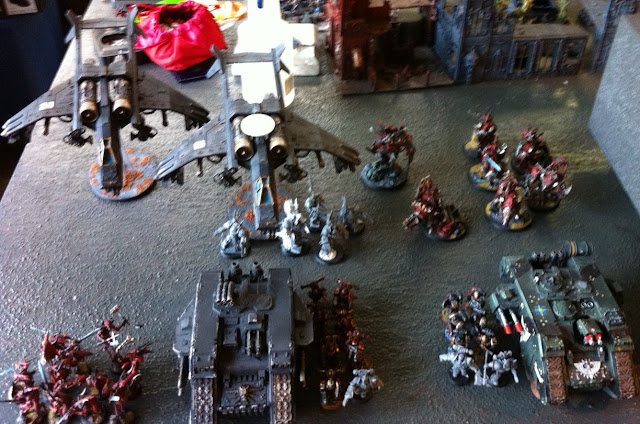 Note that the two Vulture gunships were used to proxy the Chaos Storm Eagle and Heldrake.
TURN 1
Here are a couple pictures of my opponent Brian’s army after he deployed them (note that one of the mission special rules was daemons could deploy normally rather than by Daemonic Assault). Brian chose to deploy his entire army and went first. 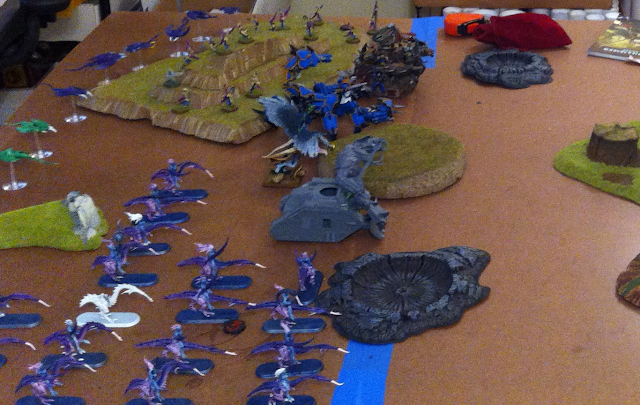 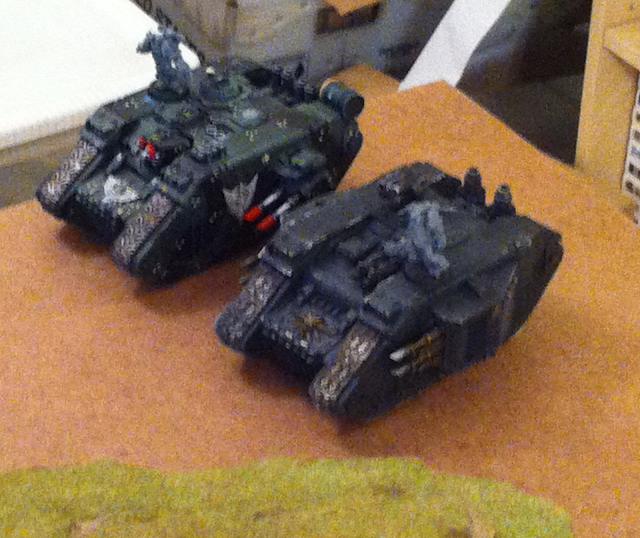 My two Land Raiders both targeted one of the Soul Grinders and destroyed it during the bottom of the first turn for First Blood.

Icon #2 activated on the battlefield (refer to mission 1 special rules) and Brian’s daemon army advanced toward my tanks. 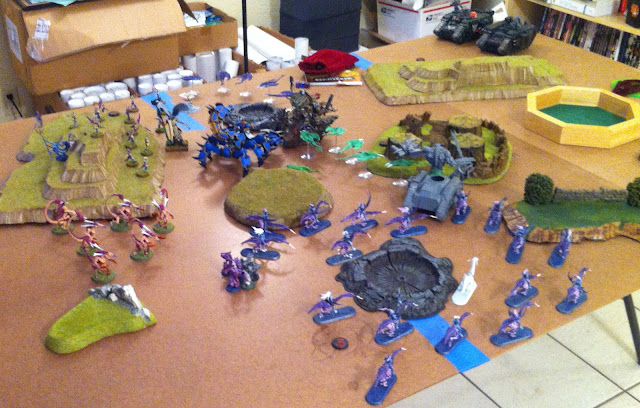 On the bottom of turn 2 my CrusherStar, Bloodletters and Heldrake arrived from reserve. I took a risky drop with my CrusherStar and unfortunately they mishapped – Brian got to then place them on the table in the very heart of his daemonic hordes… Oh noes !!!  :'( 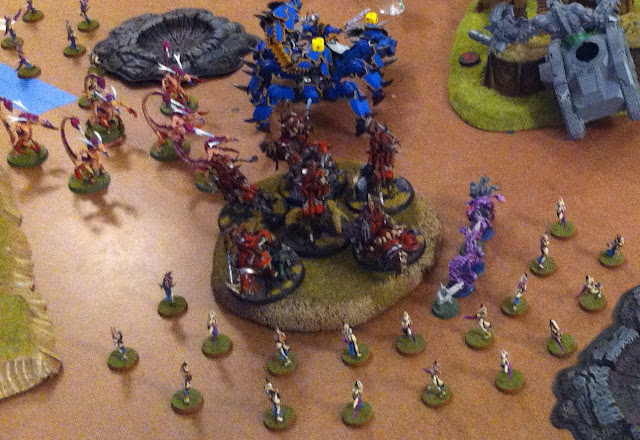 The Bloodletters came in scattering straight towards the mighty enemy daemons. 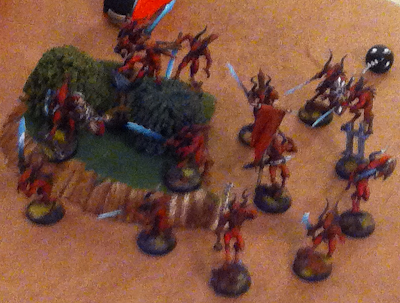 Icon #6 activated on the battlefield. Again the daemonic hordes moved forward towards my Land Raiders. 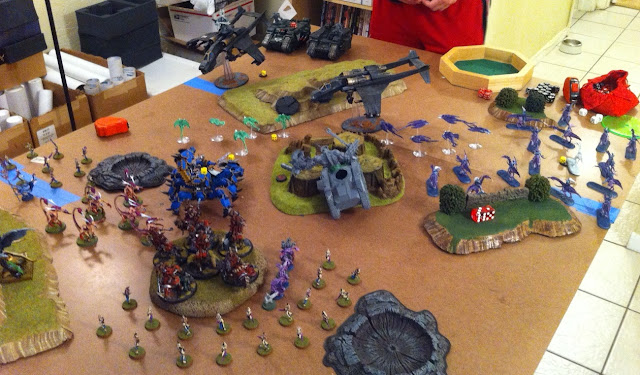 Flamers and Fiends encircle my CrusherStar while the Seekers go after my Bloodletters. 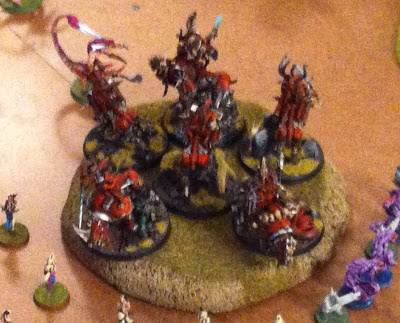 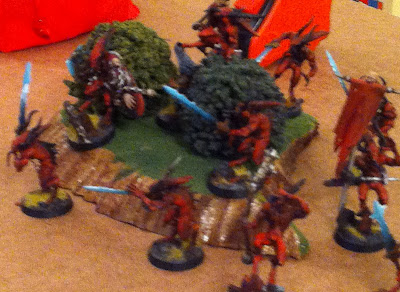 Both units of Khorne daemons are swept away by flame and claw.

The forces of Khorne welcome the arrival of Abbadon and his Mournival as their Chaos Storm Eagle zooms into battle to counter attack. My Berserkers dismount ready to charge the approaching line of daemons. 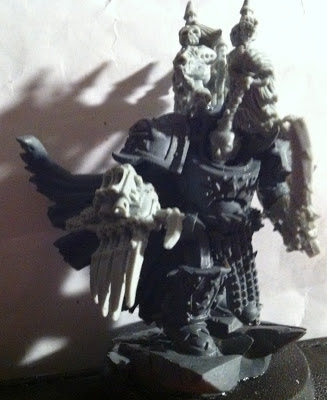 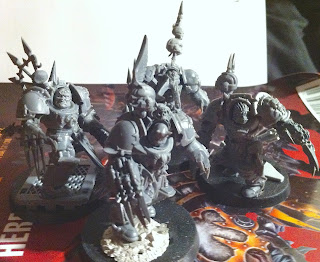 The Chaos Land Raiders destroy one Soul Grinder and immobilize the other. The Chaos Storm Eagle and Heldrake focus on one squad of Screamers and manage to wipe them off the table followed by a late charge from the Berserkers! 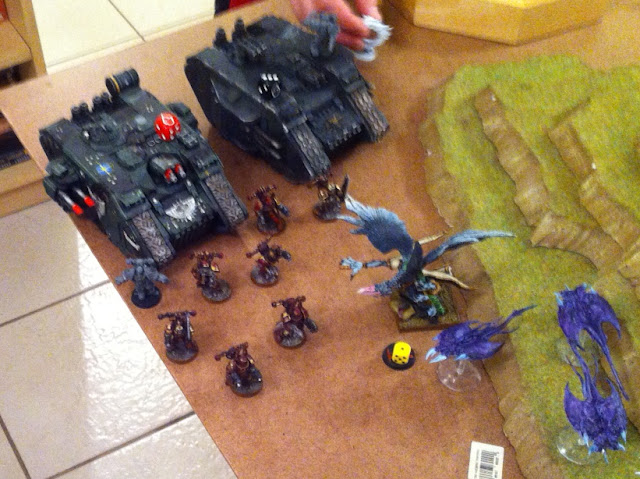 One Land Raider falls prey to the other squad of Screamers while another squad of Flamers burninate the Berserkers. Kharn and his Marines stumble out from the burning wreckage.

All I can manage in return is kill two of the Screamers but Kharn and his squad are safely tucked away in close combat with the daemons.

The Khorne Marines are gutted by the Seekers but Kharn survives the onslaught chopping down one daemon after another.

Brian surrounded the base of my Chaos Storm Eagle preventing Abbadon from disembarking this turn… dirty daemons !!! The flyers blaze away but cannot entirely destroy any of the remaining daemonic units.

So it comes to a very bloody end…

I made two big mistakes which cost me this game.

First I should have deployed my CrusherStar on the table rather than go for the risky deepstrike… that was three big kill points right down the proverbial drain. The CrusherStar can do a lot of damage and I ended up having to play without their brawn.

I had never seen anyone surround the base of a flyer to prevent a squad inside from disembarking so that caught me off guard and Abbadon never got to do his thing either… so basically I had to fight this battle without five of my heavy hitters (Abbadon-Mournival, Skulltaker-Herald-Bloodcrushers).

It was still a very close game right down to the last turn with Kharn doing more than his fair share of the lion’s work on my side of the table.

Note that the way the campaign was setup overall victory was achieved by the player who scored the most battle points over the course of all three games… so I was still right in the thick of it and I made sure not to make these two mistakes again… the proud Son of Horus went on a rampaging killing spree the next game as did my CrusherStar. 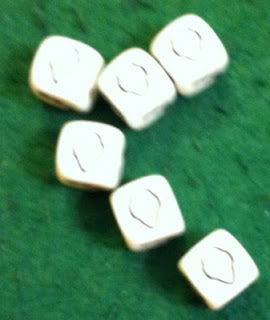 3 Responses to “Guest Battle Report: Khorne vs. Slaanesh and Tzeentch”

Leave a Reply to bugsculptor