Purchase your 3 Day narrative Pass, here. ONLY a few left!

Join The Narrative Guys for a weekend of fun 40k, where the action on the table drives the mission and story of the weekend! This event features three great parts: 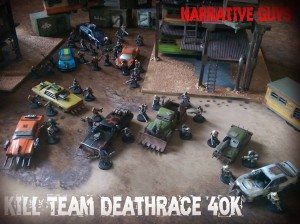 Saturday: Narrative Campaign Day 1: Join the Forces of the Imperium or the Enemies of Man in a struggle for the Vengeance system. Fight for fun, fight for honor, and watch the story and your missions change as your team casts the fate of an entire planet. This is our main event, featuring two multi-hour, multi-player games.

Sunday: Narrative Campaign Day 2: The battle for Vengeance escalates to even larger scale in this climactic multi-player event. The missions get bigger, the enemies get more numerous, and victory hangs in the balance.

Narrative Campaign events are 2000-point armies; guidance on list building will be forthcoming. Exact schedule will post soon. Friday and Sunday events are optional, should players have other event or travel conflicts.

Get updates on the amazing terrain, the narrative storyline, and more at www.thenarrativeguys.com.