Last week I talked about how I would like to expand the A Song of Ice and Fire Miniatures game and spoke about how one of the ways I would expand the game would be with campaign rules. Thus I have decided to design some rules for the community to campaign in the world of ASOIAF. Here is a rough first version and welcome all feedback so that we can improve the system for all to enjoy.

Warden of the North

“Roslin caught a fine fat trout. Her brothers gave her a pair of wolf pelts for her wedding.” – Walder Frey’s message to Tywin Lannister

The Starks are all dead and the North is ripe for the taking. Will you defend the honour of the house that was betrayed? Or will you claim it for your own legacy?

For the first set of rules I have tried to keep the campaign small scale to focus on perfecting the base set of rules before expanding. The fight for control over the North is front and center of the conflict in ASOIAF and many Lords made plays for it. Whether you are playing as the Blackfish who escaped the clutches of the Freys and intends to avenge his blood, or you are Stannis marching down from Castle Black to claim the North for your future conquest. All taste the temptation of the North’s power, and all are fighting for control. 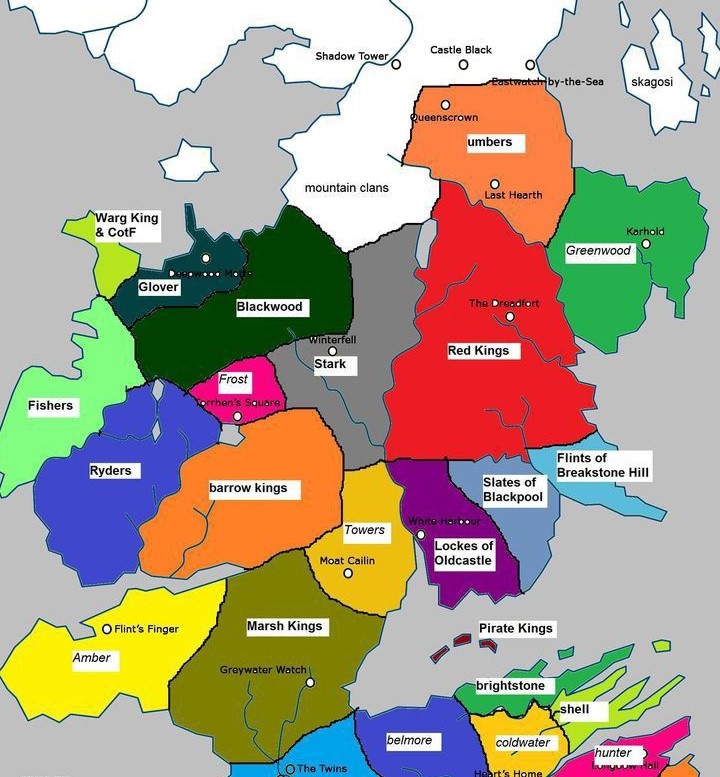 Above is a simple map of the North, I would hope to make a map with more locations to have more moves in place during the campaign. But for a starting ruleset and a simple campaign map this will do.

There are two game modes you can play with this map; Step-by-Step and Forced March.

One by one, you and your opponent will pick a Zone in secret. Then both players reveal the name of the Zone on the map. If the Zones revealed has not been Claimed by any player, then the player that revealed the Zone Claims the Zone. If the Zones revealed are the same Zone, then the players must each roll a D6 to decide who Claims the Zone, (highest roll claims Zone, reroll ties). Do this until all Zones on the Map have been claimed.

With the North now declaring itself to one of the two would be Wardens of the North, it is time to marshal the troops for Battle. Now roll off to decide who will go first in the Campaign Turns. The winner then begins their turn.

On your turn you may select one of the Opponents Claimed Zones and enact a Battle for the Zone. You will randomly select a game mode from the Rulebook and play the game mode at the points level in the Army Building Rules. At the end of the Battle, the winner Claims the Zone. If there was a Tie, then the Zone remains Claimed by the Defender.

Forced March is more or less the same as the above, however has different rules for setting up and interacting with the Map. It also has separate Campaign Victory Conditions.

At the beginning of the Campaign do not Claim Zones like the above. Instead pick one of the named holds on the Map, such as Greywater Watch in the Marsh Kings. This is your Seat in the North and you Claim the Zone. Roll off, and the Player that wins the roll off goes first.

At the beginning of the campaign, each Faction has a Army Pool of Units, Attachments and NCUs to create their lists for Battles. To make the Army Pool, at the beginning of the game, each Faction selects their Starter Set and any Commander from the Faction and adds them to their Army Pool. For the likes of Neutral Factions, select a Starter Set from any Faction and a Neutral Commander to add to the Army Pool.

When making lists for Battles, you can use what is available in your Army Pool when making your list. The points for each battle are:

After every Battle, you may add a Unit, Attachment or NCU to your Army Pool. Decide with your Opponent how you would like to determine this, however I would recommend either randomly deciding or picking something that makes narrative sense. I will make a random roll table for each faction when making a full document, however here is an example of how I would make the Lannister tables.

I hope to make a better, more detailed map in the future with several smaller maps for specific conflicts such as the Riverlands and Westerlands. I also want to design Zone Buffs/Debuffs to influence your decision on where you might want to Claim, what if White Harbour supplied you with a free roll on a NCU table? Or Holding Winterfell gives you an additional Campaign Victory Point? It would force you to make more strategic picks for the campaign.

I also want to design a system where you can create your own Commanders and Commander Decks so that you can make your young lesser house who is attempting new found glory in the world. Perhaps even rules to design your own Units on top of this.

Army Tokens. Using the Banners to represent Armies in the Campaign seems an obvious choice, and could increase the tactics needed such as there is no Battle in a Zone unless there are two Armies present. And you can raise new armies, and have large ones fighting small ones. There’s a lot you can do here.

The final idea is a building mechanic. Something akin to the old Necromunda rules where you could send some of your crew to mine for more resources or send them to the casino to gamble for more coins. Wouldn’t it be great if you construct Buffs/Debuffs for your army? Or send some NCUs as envoys to secure Zones, Buffs/Debuffs and Troops?

This is a project I will be updating until I have a full set of rules we as a community can enjoy. Please let me know what you think and any ideas you have.

View all posts by Carly C →