You are here: Home › 40K › News › Space Marines Preview: Create Your Own Chapter!

Have you ever wanted to be your own Chapter Master, creating a mighty strike force of Adeptus Astartes in your own image and in the colours of your choosing? Of course you have – but how cool would it be if you were able to choose their Chapter Tactics as well? Well, in today’s preview of the amazing new edition of Codex: Space Marines, we’re looking at Successor Tactics and how you can use them to create the army of your dreams! 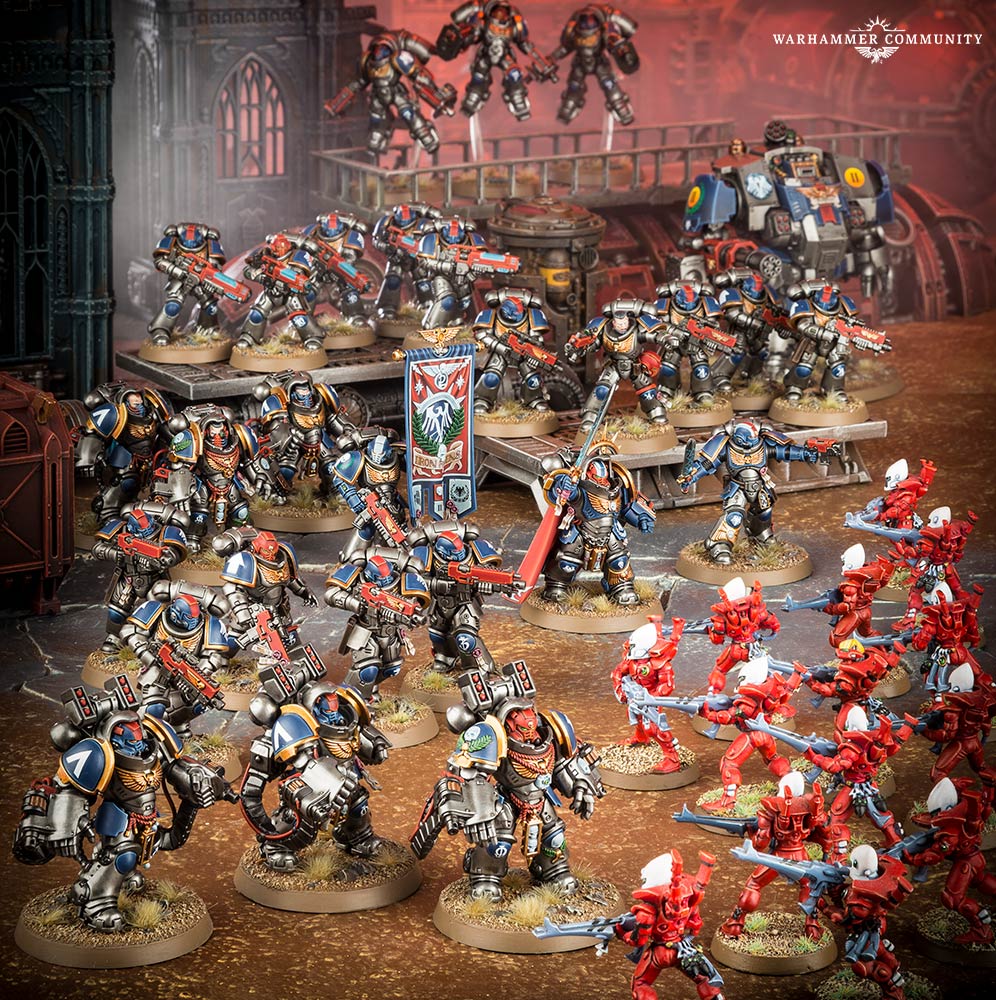 Before we get into the nitty-gritty of how to choose your own Successor Tactics, let’s take a quick look at what it means to be a successor Chapter…

In the wake of the Horus Heresy, the original Space Marine Legions were disbanded, their fighting strength reformed into dozens of smaller Chapters. One Chapter from each Legion – known as its First Founding Chapter – kept the original Legion’s name and home world. The others were known as successor Chapters, and would eventually establish new home worlds across the Imperium. This act was known as the Second Founding. In the 10,000 years since, there have been many subsequent Foundings, resulting in the creation of over a thousand successor Chapters, all of which share the same genetic material and Primarch primogenitor as their parent Chapter. The most recent was the Ultima Founding, which consisted entirely of Primaris Marines. 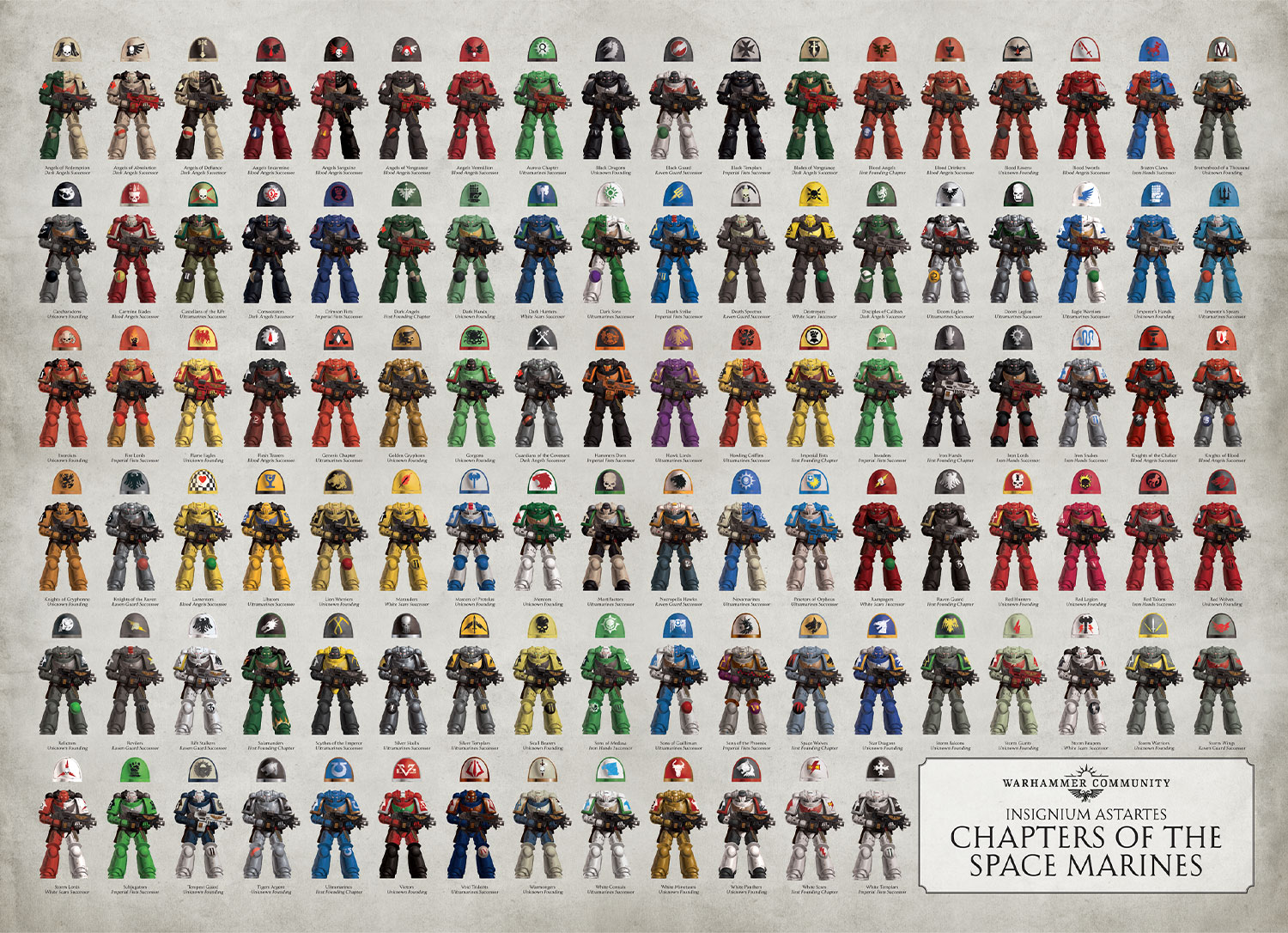 Many of the successor Chapters share similar, even identical, martial practices to their First Founding Chapter – especially those of Ultramarines genetic stock, who tend to strictly adhere to the tactical teachings of Roboute Guilliman’s Codex Astartes. Yet there are others whose fighting traditions diverge radically according to the preferences of their founding Chapter Master, the nuances of their home or recruitment worlds, or to meet the needs of a particularly defining campaign.

Let’s look at how you can field successor Chapters on the battlefield.

This is the bit where you get to shape the future of the 41st Millennium by creating your own Space Marine successor Chapter! To do so, you need to choose a name, Chapter icon and colour scheme. Unless you’d prefer the knowledge of their genetic heritage to remain unknown (a fate shared by the Blood Ravens), you should also choose a First Founding Chapter to be your successor’s parent Chapter.

Another fun part about introducing a new Chapter to the grim darkness of the far future is creating its own history. Which planet is their home world, and in which Segmentum is it located? Is it situated beyond the Cicatrix Maledictum, in the Imperium Nihilus? Who is their Chapter Master, and what relics of the Chapter does he wield? Were they gifts from fellow Chapters (perhaps even their parent Chapter) or hard-earned as battle honours? 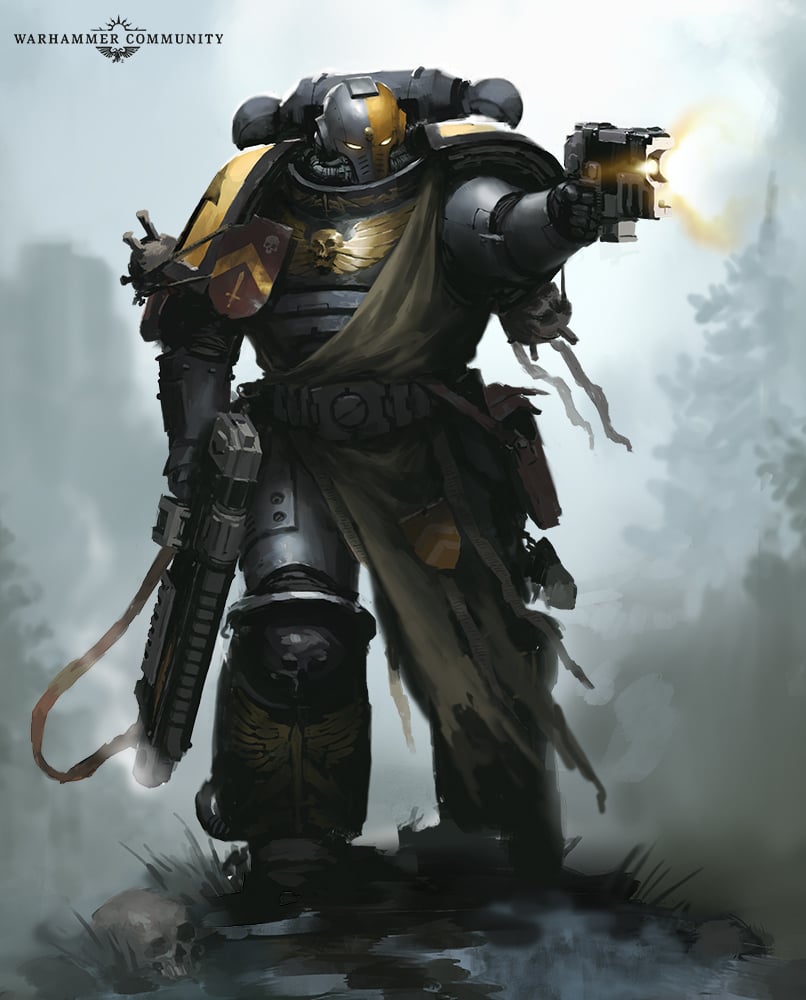 But that’s not all – with the new codex, you can now decide how they fight in battle, too, by creating your own custom Chapter Tactics for your newly founded successor Chapter. You do this by picking any combination of two Successor Tactics from the 19 listed in Codex: Space Marines. Each Successor Tactic provides your Chapter with a powerful in-game ability – whether you choose a combination that suits a particular narrative you have in mind or simply your favoured devastating battlefield combo is up to you!

There are a huge variety of outcomes available, ranging from one extreme to the other. In fact, you can even directly replicate the Chapter Tactic of a First Founding Chapter according to its genetic heritage in the lore, or one on which you’ve chosen to base a successor Chapter of your own creation. 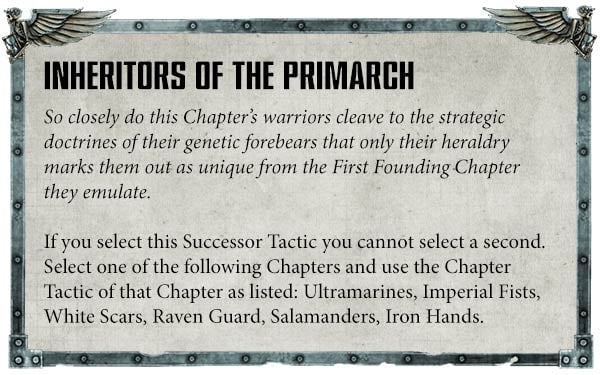 If you want your Chapter Tactics to sit somewhere in the middle, by giving a nod to those of your First Founding Chapter without fully committing to them, there are plenty of options. For example, Master Artisans represents one aspect of the Salamanders Chapter Tactics – namely the re-rolls granted by the exceptional craftsmanship of their wargear… 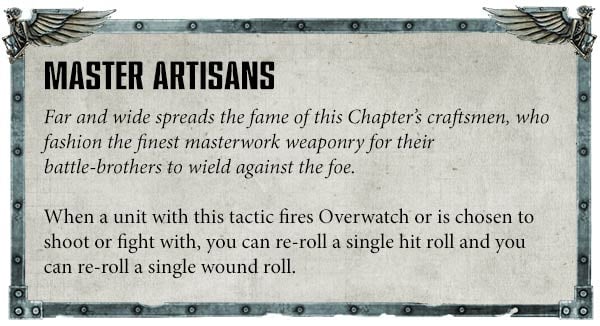 …Meanwhile, Stealthy mirrors one of the abilities of the Raven Guard Chapter Tactics. 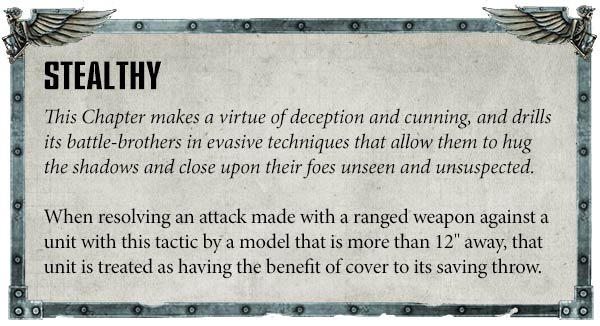 In either of these cases, you’ll still be free to select a second Successor Tactic to add your own narrative or competitive flair and make the Chapter your own. Of course, at the far end of the spectrum is the total freedom to create a Successor Tactic combination of your choice, free from any obligation to a First Founding Chapter. To that end, here’s an example of a Successor Chapter that excels in obliterating their foes with deadly accurate firepower from a distance with their choice of tactics… 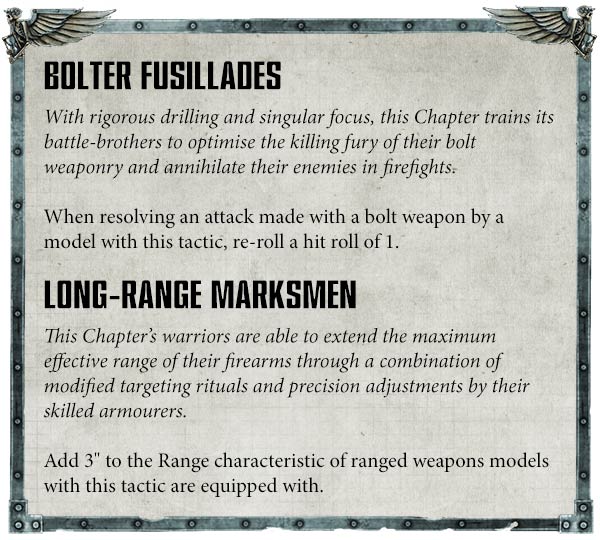 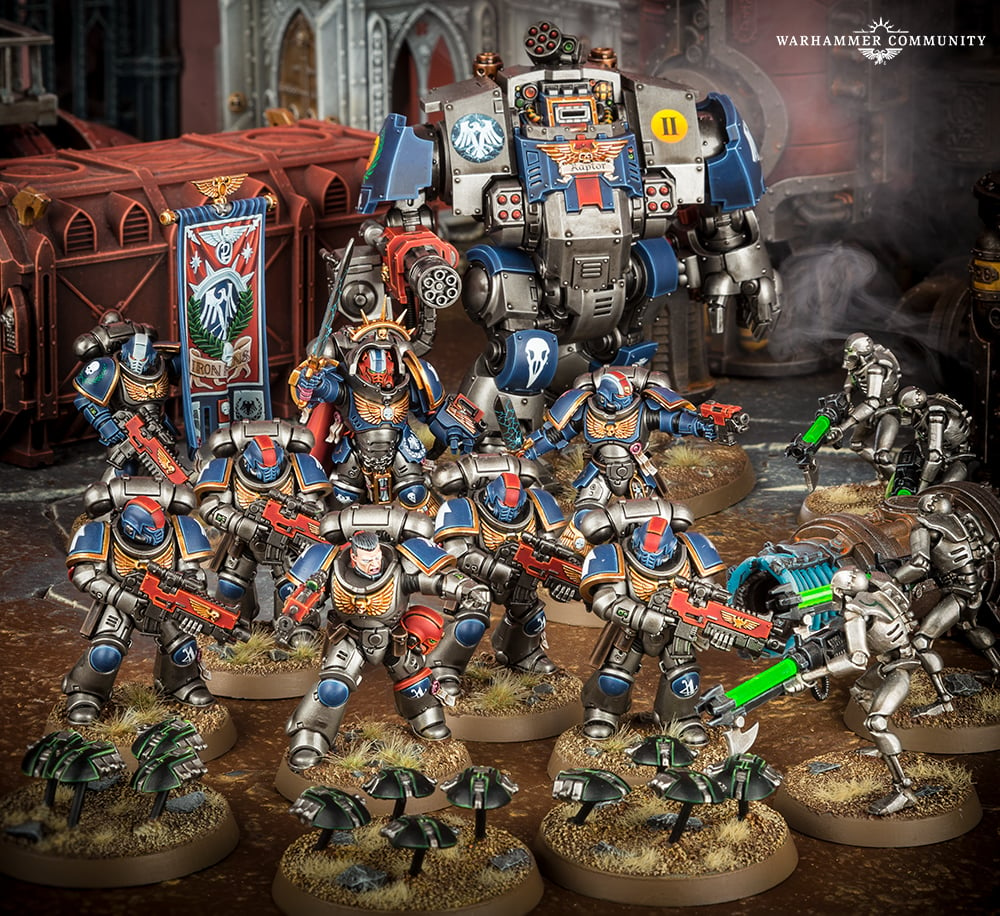 Alternatively, if you want to go for a more narrative spin, you can base your choice of tactics on your Chapter’s history in the lore (or one you’ve created for them). The Scythes of the Emperor, for example, were nearly annihilated by Hive Fleet Kraken during the Second Tyrannic War and swore vengeance against them. Preferred Enemy (choosing Tyranids as the keyword) would, therefore, be a great option, as would Indomitable for the stoic determination they showed when faced with the numberless hordes of Tyranids. 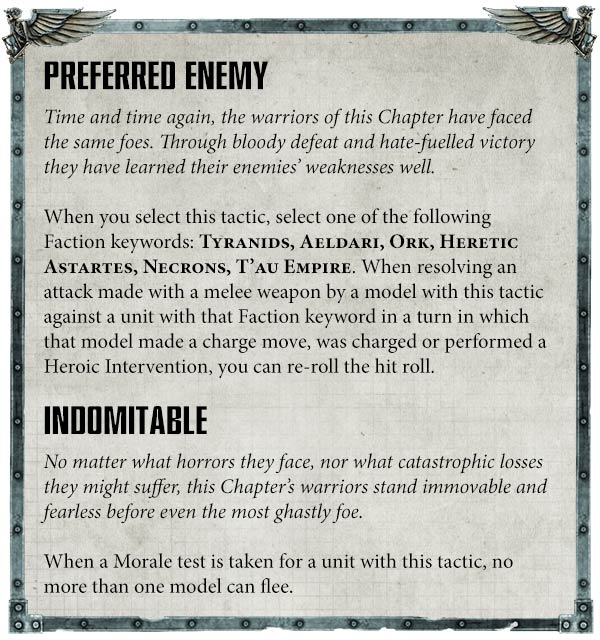 With the arrival of Successor Tactics in the new codex, commanding a Chapter of your own creation has never been easier! We’ll have more on this subject next week as we showcase armies belonging to some Space Marines fans who have created their own Successor Chapters and carefully selected their tactics. 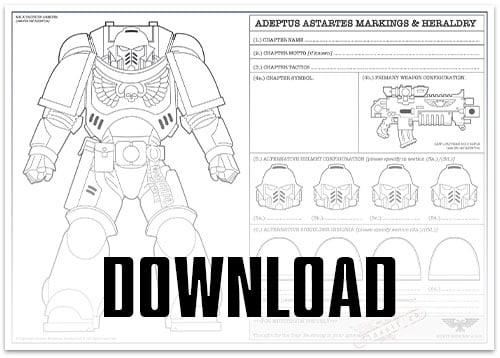 Now you’ve read all about how to create your own Chapter, why not download our handy PDF so that you can design your own Space Marine colour scheme? We’ve even updated it so you can add your choice of Successor Tactics to your finished creations. We’d love to see yours on the Warhammer 40,000 Facebook page once it’s filled out. Grab a Start Collecting! Space Marines set and get painting!

7 Responses to “Space Marines Preview: Create Your Own Chapter!”