Slaanesh in the Mortal Realms

You are here: Home › Age of Sigmar › Slaanesh in the Mortal Realms 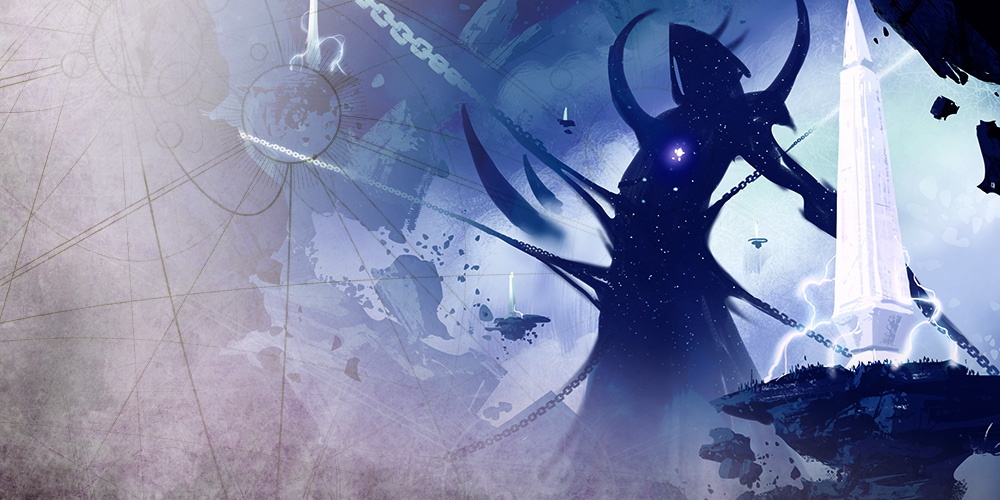 Battletome: Hedonites of Slaanesh is on its way, kicking off a long-awaited new age for the servants of the Dark Prince. Today, we’re looking at just how this youngest of the Chaos Gods works, how he came to the Mortal Realms, and just what he – and his followers – are up to right now…

Slaanesh is the Chaos God of obsession and excess. All the Chaos Gods draw their strength from the emotional animus of mortals, and Slaanesh is no exception. However, the Dark Prince is unique among his brethren in that he does not represent a specific, crystallised, concept like rage, ambition or despair, but instead draws strength from the intensity of any given emotion – any form of excess feeds Slaanesh. 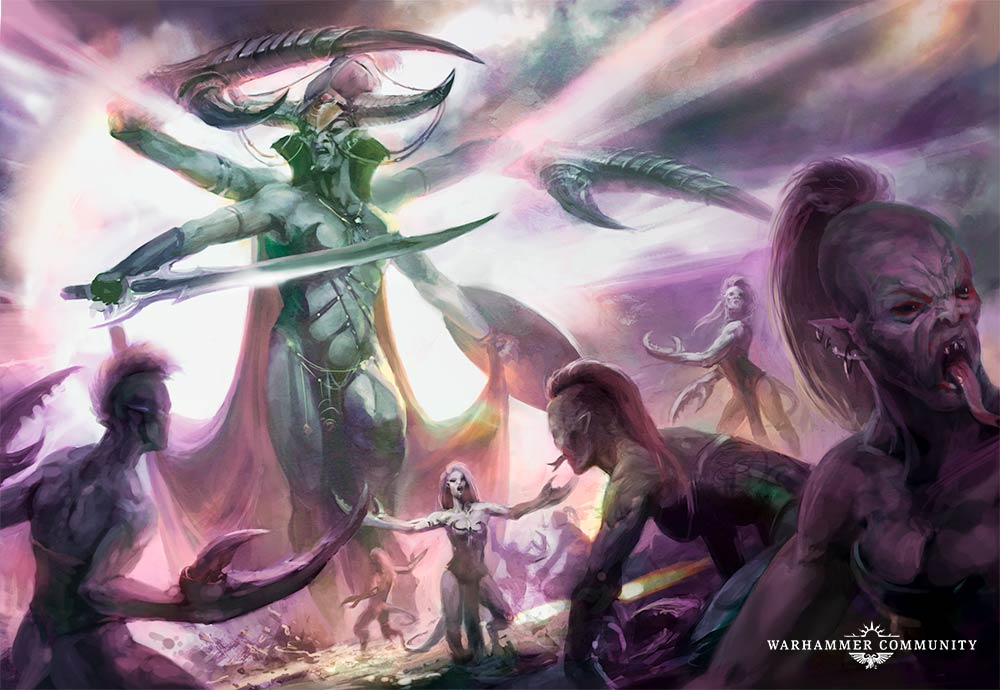 This article from the Warhammer-community page answers the question that’s been left oddly unanswered in AoS until now: what has Slaaensh been up to since the fall of the Old World?

This makes Slaanesh terrifyingly powerful, to the point where he is secretly feared by his brother gods. Each god risks being consumed by Slaanesh, as each is an embodiment of the all-consuming ideals, mindsets and obsessions that sustain the Dark Prince.

How Slaanesh came to the Mortal Realms

After feasting on aelfkind during the End Times of the world-that-was, Slaanesh, for a time at least, surpassed his brethren in sheer power and influence. Despite being near-stupefied from his feast of souls, the Dark Prince was stirred from his digestive lethargy by the discovery of the Mortal Realms by Chaos. This was not just one world, but eight – a prize the Dark Prince sought to claim for himself.

The Age of Myth

Slaanesh’s war on the Mortal Realms was subtle at first, snaring mortals with distant echoes of sensation. As civilizations grew, so too did their tastes for vice and excess, with cliques and cults of self-advancement and pleasure allowing ingress for the creeping influence of Slaanesh.

Slaanesh’s greed was ultimately the cause of his imprisonment, leading him to be trapped between the Realms of Light and Shadow as he sought to devour the aelven gods. Slaanesh has a particular taste for the souls of aelves, who are by nature passionate, obsessive and focused creatures with highly attuned emotions, so the promise of consuming an aelven deity – let alone four! – was too much to resist. This gambit, perpetrated by Teclis, Tyrion, Malerion and Morathi, saw Slaanesh bound in vast magical chains and subjected to torturous pain as his captors drew the aelven souls he had once consumed from his corpus. 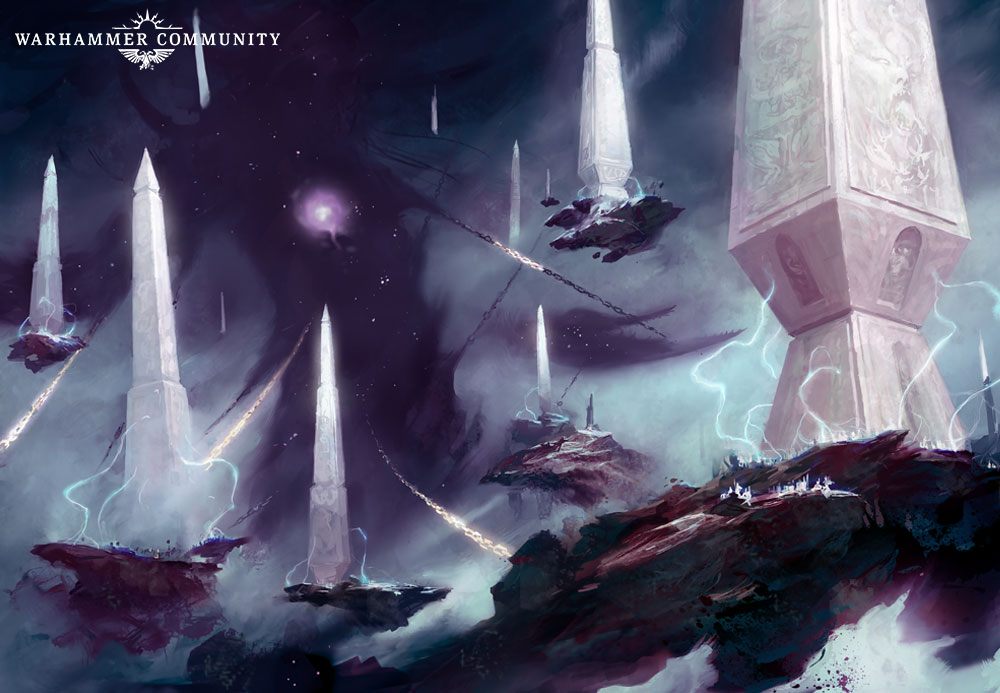 The Age of Chaos

The capture of Slaanesh greatly reduced his influence in the Mortal Realms but did not stop it. From the Realm of Chaos, the greatest Daemonic servants of Slaanesh continue the work of the Dark Prince. Many empires fell to excess during the Age of Chaos, ultimately destroyed by Slaaneshi daemons that tempted mortals and spread corruption. At the Battle of the Burning Skies – the apocalyptic conflict in which Sigmar’s hammer, Ghal Maraz was lost – the Keeper of Secrets known as Luxcious declared herself to be the Ur-Slaanesh and a replacement for the Dark Prince. 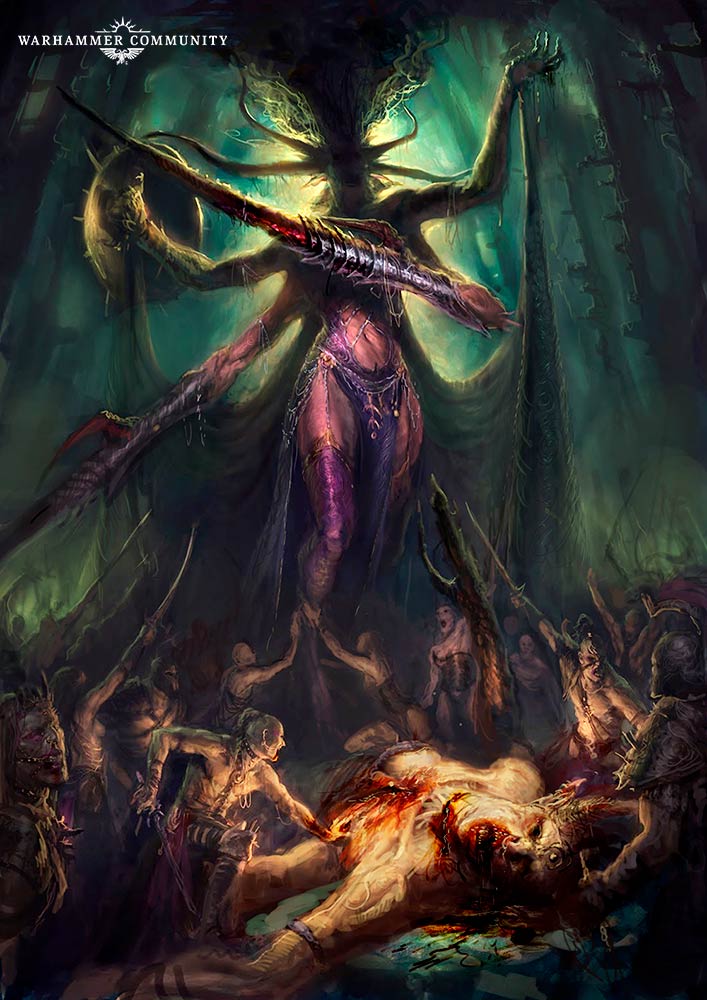 The Age of Sigmar

The persisting influence of Slaanesh was felt particularly keenly during the opening battles of the Realmgate Wars – Sigmar’s campaign of liberation. The Chaos Lord Lascilion, in his arrogance, sought to slay Neferata, Mortarch of Blood, but was stopped by the timely arrival of the Stormcast Eternals.

Meanwhile, the Daemon Prince Synlesha Paleblood used the speed of his host to great effect against rampaging tribes of Orruk before being slain by a well-placed headbutt from the Megaboss Dakkbad. 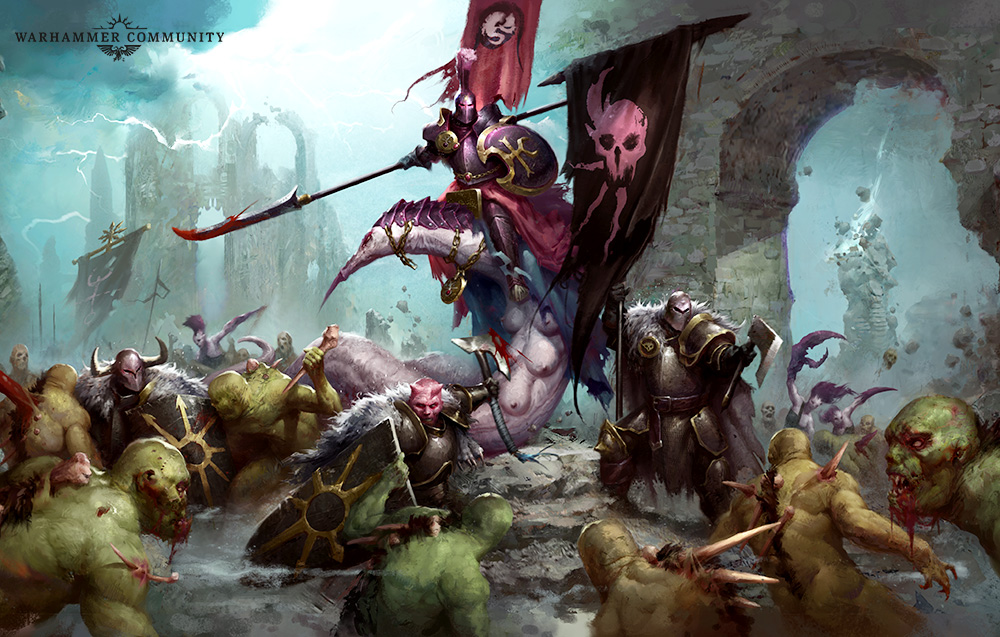 Over the long years since Slaanesh’s imprisonment, his followers have split into three main camps. Some, known as the Godseekers, obsessively hunt for Slaanesh across the Mortal Realms. Some hosts are known as Pretenders, led by particularly influential individuals who seek to usurp their missing god’s position. Others, known as Invaders, seek only to please their basest desires, reaving and killing across the realms heedless of Slaanesh’s disappearance.

Will Slaanesh ever escape? Will his servants succeed in conquering the aelves? We’ll have to wait and see to find out… 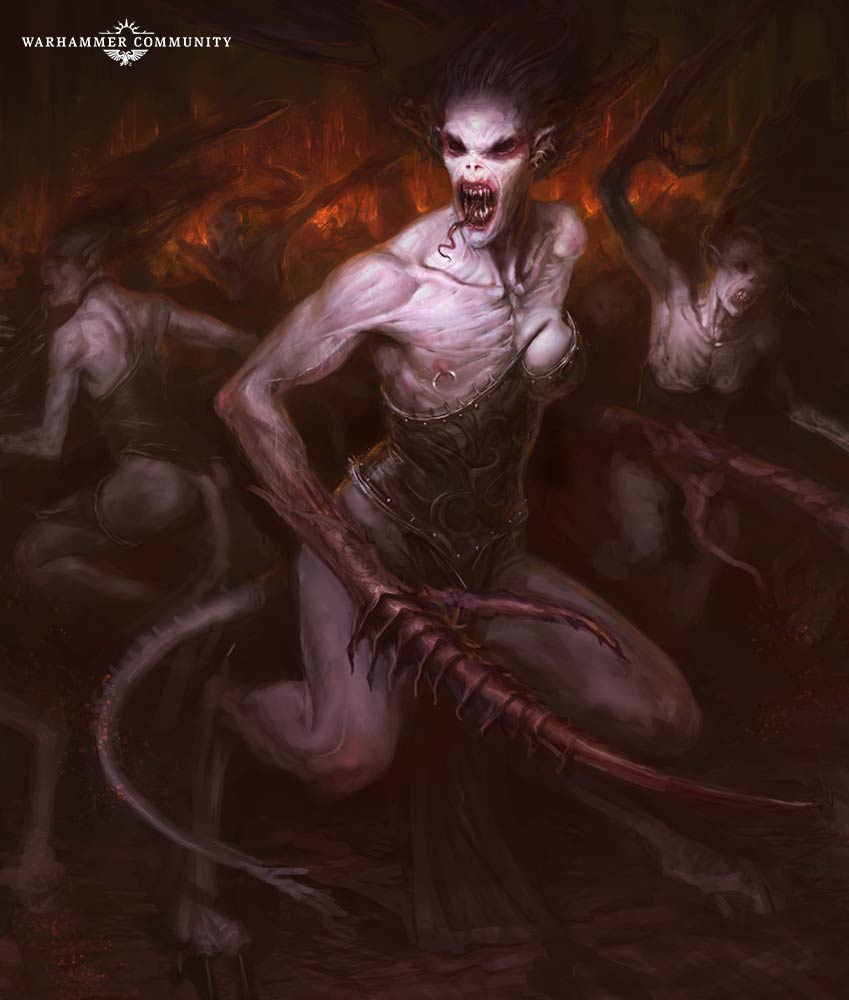 To learn more about Slaanesh (and to kick off your army while you’re at it!), grab yourself a copy of Wrath and Rapture – and stay tuned for more previews very soon…

17 Responses to “Slaanesh in the Mortal Realms”