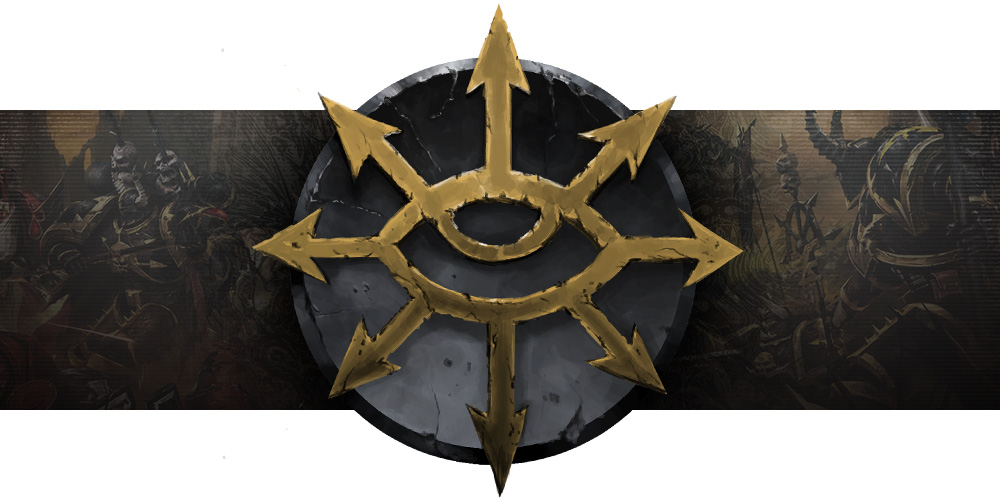 The Chaos Space Marines are set to receive a huge wave of new reinforcements – not to mention the amazing Daemonkin units in Warhammer 40,000: Shadowspear – so this week, we’re taking a closer look at the Traitor Legions themselves. First up are the main antagonists of Vigilus Ablaze, the dreaded Black Legion…

Who are the Black Legion? 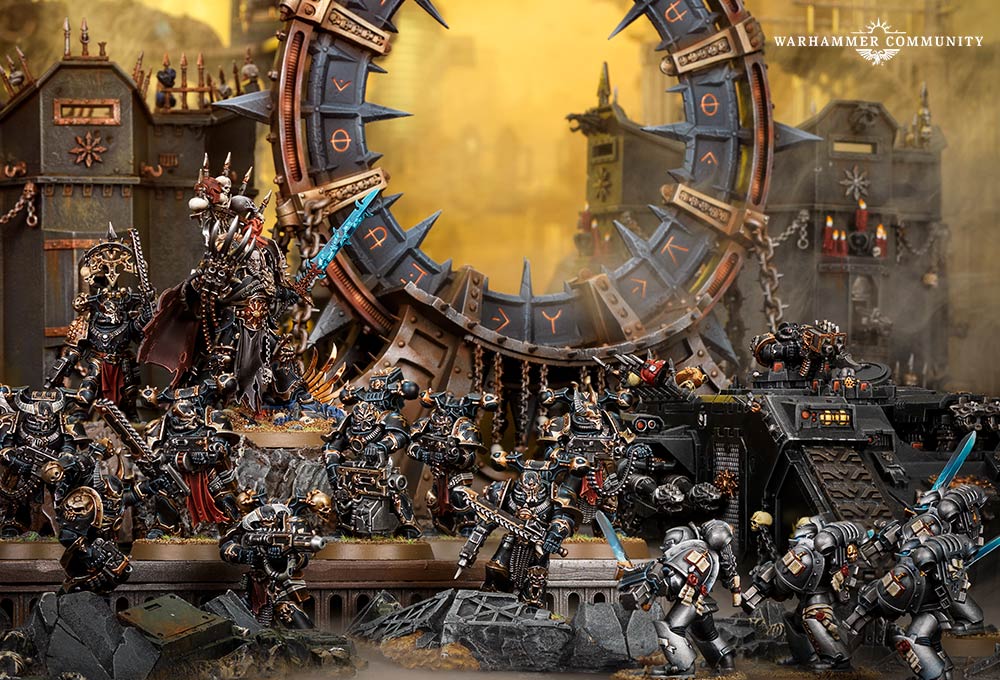 Ever since Abaddon took up the Talon of Horus and the title of Warmaster, the Black Legion have been foremost among the Heretic Astartes. Far from resting on their past glories as former warriors of the Sons of Horus, the Black Legion earned their pre-eminence through bloody exploits in the crucible of battle. Even their rival Traitor Legions have felt the wrath of the Black Legion for failing to fall in line or foolishly challenging their power.

“Horus was weak. Horus was a fool. He had the whole galaxy within his grasp and he let it slip away.” – Abaddon the Despoiler

The Black Legion are not only the numerous of the Heretic Astartes, they are also the most varied. Mutants and Sorcerers, Possessed and Daemon Engines – all have a place within the Black Legion. They also include within their ranks former members of other Legions, so it is not uncommon to see automatonic Rubricae and packs of frothing Berzerkers fighting alongside the Black Legionnaires.

As the stars of the show in Vigilus Ablaze, the Black Legion are blessed with a host of bespoke rules to complement those found in Codex: Chaos Space Marines, including eight new Stratagems. Check out Tip of the Spear, which will give you a great opportunity to bag the victory point for First Blood in matched play. 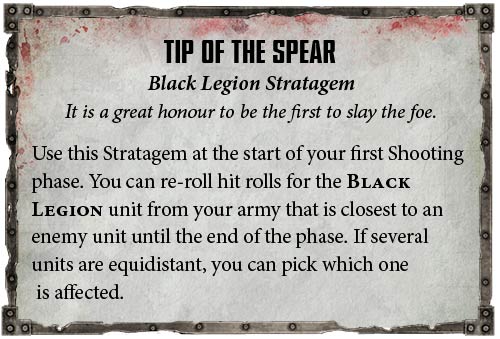 Vigilus Ablaze also includes a full set of six Tactical Objectives, Warlord Traits and Relics for your Black Legion army. Just imagine how effective Angelsbane will be with the beta Bolter Discipline rules! 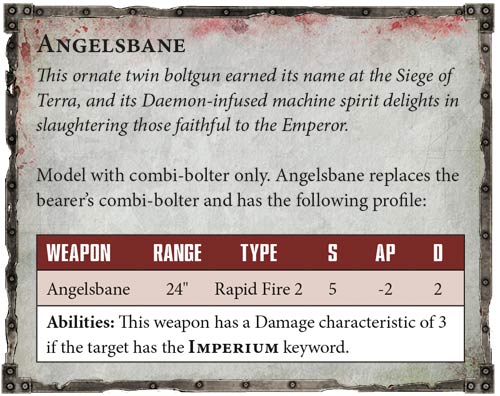 But what will a typical collection look like? At the heart of the Black Legion are its squads of Chaos Space Marines, Havocs and Raptors clad in their baroque, black and gold power armour. 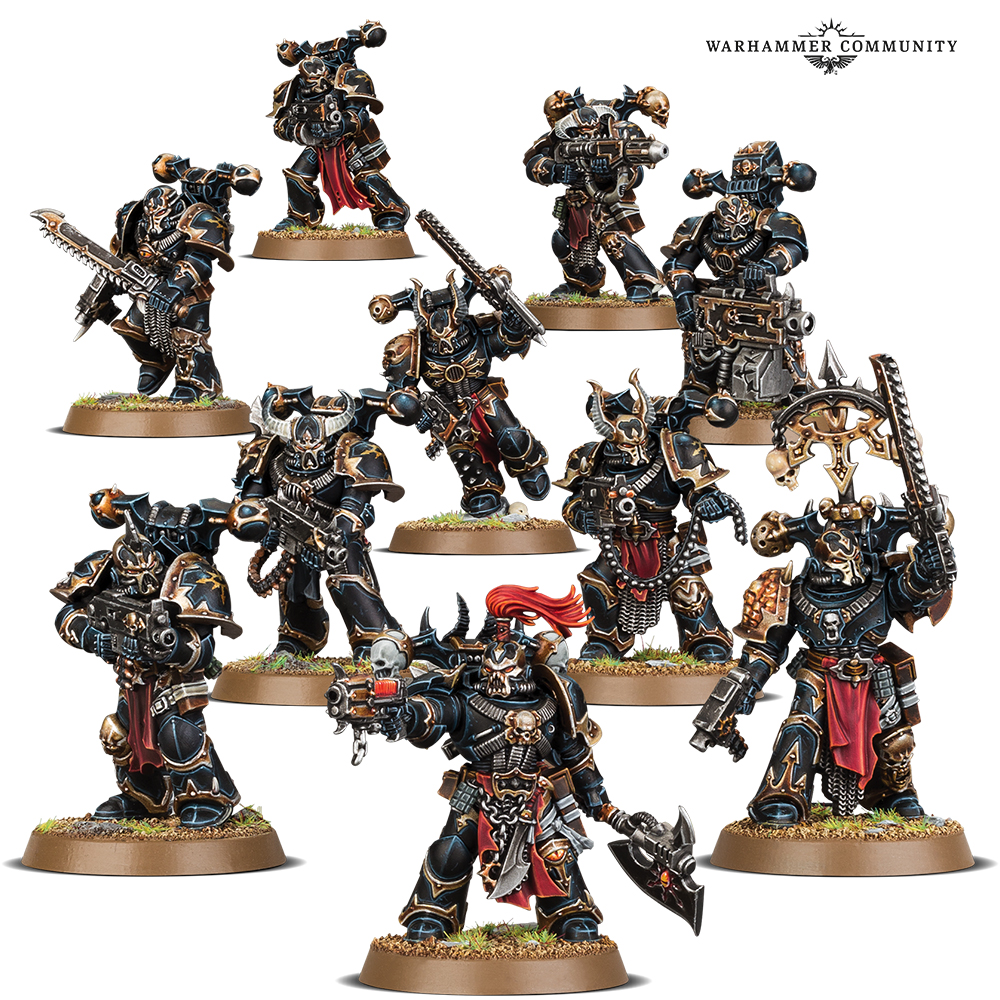 Beyond that, pretty much anything else is fair game! That being said, there are a number of iconic characters and forces within the wider structure of the Black Legion… 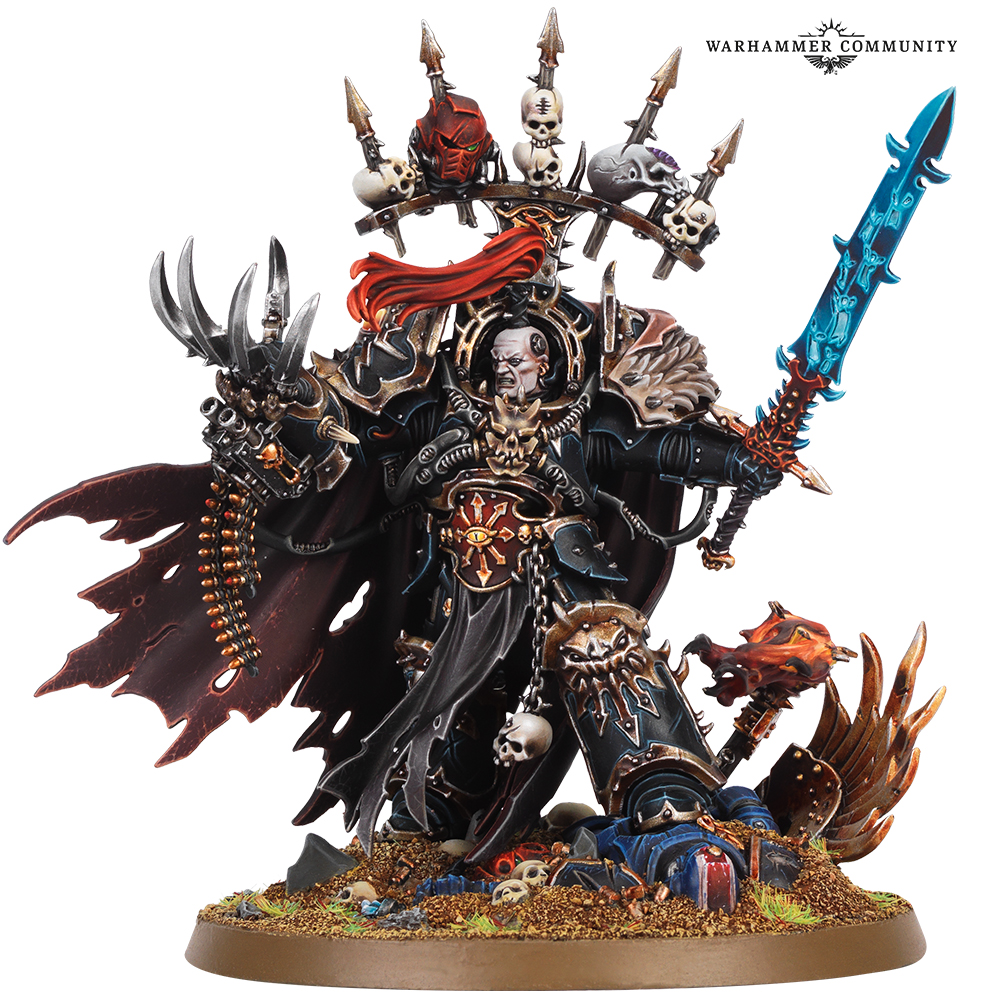 Despite having power far beyond the Black Legion, Abaddon is still, first and foremost, their supreme commander. With his astonishing new model on its way very soon, what more excuse do you need to include the big bad ‘un himself? Of course, to do justice to the imposing size of the new Abaddon model, Vigilus Ablaze has an updated profile worthy of the mighty Warmaster.

The Bringers of Despair 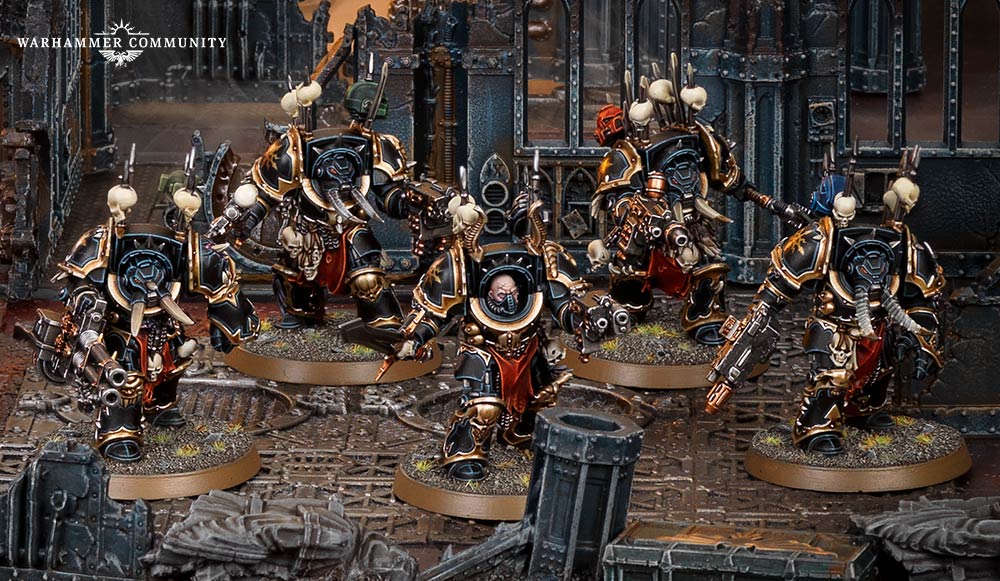 Abaddon is rarely seen without his loyal Terminator-armoured bodyguard, drawn from the very deadliest fighters within the Black Legion. If you’re picking up Abaddon, it’d almost be rude not to grab a bunch of Terminators to represent the Bringers of Despair as well. If that isn’t reason enough, Vigilus Ablaze introduces a Specialist Detachment that will really help you get the most of Abaddon’s elite Terminators. 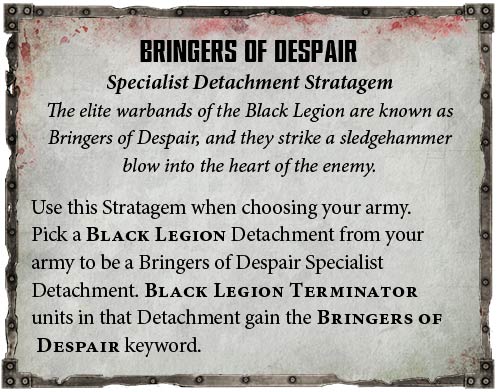 The Bringers of Despair can wreak absolute havoc in the Fight phase with the Brutal Subjugation Stratagem, breaking the spirit of the enemy even as they break their bodies – a brilliant counter for elite enemies and hordes alike. 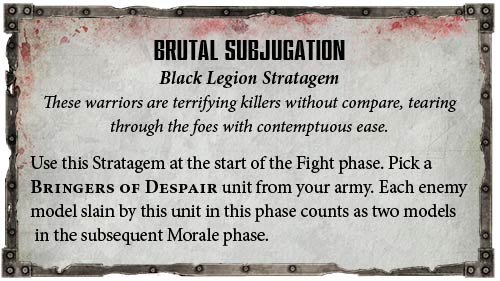 The Chosen of the Warmaster

In the absence of Abaddon, one of the Warmaster’s foremost lieutenants will serve as an apt Warlord in his place. With titles such as Lord Ravager, Lord Deceiver, Lord Corruptor and Lord Purgator, each of the Chosen of Abaddon is a powerful Chaos Lord or Sorcerer in their own right, tasked with a senior level of command within the Black Legion. One of these dread lords can be easily represented by the Chosen of the Warmaster Warlord Trait. 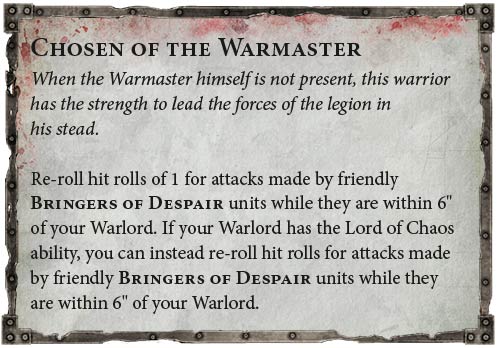 Their presence will make your Bringers of Despair hit even harder. If you’re feeling especially fiendish (you’re using the Black Legion – of course you’re feeling especially fiendish!), you can make the ultimate statement by fielding Abaddon, his Bringers of Despair, and one of his chosen all together by using the Field Commander Stratagem from Vigilus Defiant. 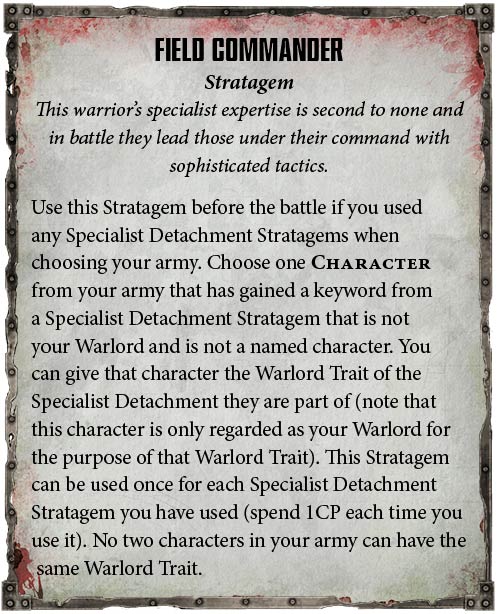 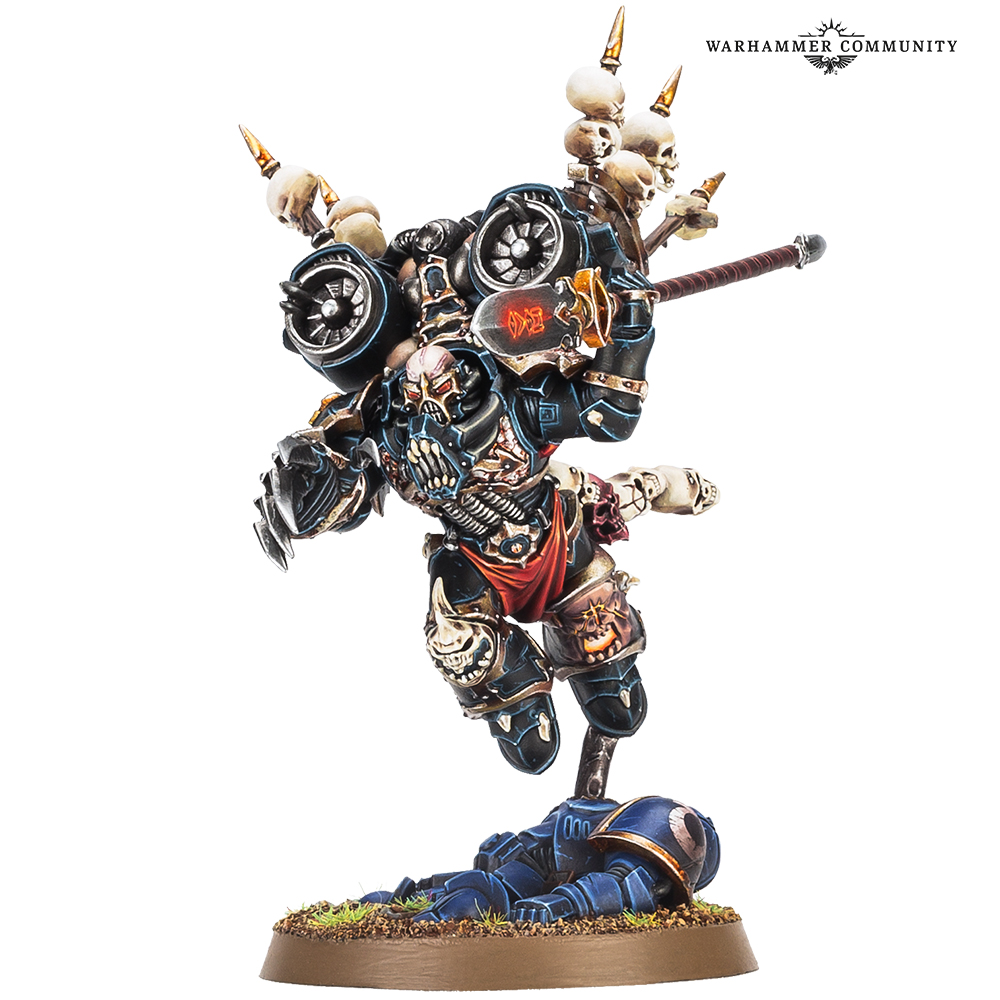 So far on Vigilus, this guy has been spearheading the Black Legion forces on behalf of the Warmaster. If you’re looking to pick up a unit or two of Raptors for your Black Legion, don’t leave home without the Herald of the Apocalypse to lead them for handy re-rolls to hit in close combat.

That’s it for today, but check back every day this week as we cover the rest of the Traitor Legions. You can pick up some Daemonkin units for your Black Legion by grabbing the Shadowspear box, in stores or online, today. If you want to learn about the origins of Black Legion, be sure to give Aaron Dembski-bowden’s Talon of Horus novel a read.

The Chaos Space Marines are set to receive a huge wave of new reinforcements in the near future – not to mention the amazing Daemonkin units in Warhammer 40,000: Shadowspear – so this week, we’re taking a closer look at the Traitor Legions themselves. Today, we’re looking at the Iron Warriors – the indomitable, cold-hearted, siege masters who are the sons of Perturabo…

Who are the Iron Warriors?

Since the earliest days of the Great Crusade more than ten millennia ago, the Iron Warriors Legion have been renowned for their mastery of siege warfare. None save the Imperial Fists could rival the skill of the Iron Warriors in this field – a trait that fostered a bitter rivalry between the Primarchs Rogal Dorn and Perturabo. In the wake of the Horus Heresy, this culminated in a mutually destructive, attritional war fought between the two Legions. Perturabo taunted Dorn to attack a nigh-impregnable, fortified death trap he had built, called the Iron Cage, which resulted in a bloody stalemate and massive losses to both sides.

Now, as a Traitor Legion, the Iron Warriors have lost none of the deadly siege skills that first cemented their name into legend. The Iron Warriors systematically destroy all before them through the merciless application of heavy ordnance and bolter fire. They regularly field entire armoured columns of Vindicators, Predators and Rhinos bearing their gunmetal and chevron Legion colours. The Iron Warriors Traitor Legionnaires are often accompanied by more esoteric creations, such as Daemon-bound war machines and the living weapons known as Obliterators and Mutilators.

First and foremost, the Iron Warriors are siege specialists, able to bring down even the most heavily armoured fortifications and picking off targets cowering in cover. There are precious few places that are beyond the reach of the Iron Warriors’ murderous firepower. 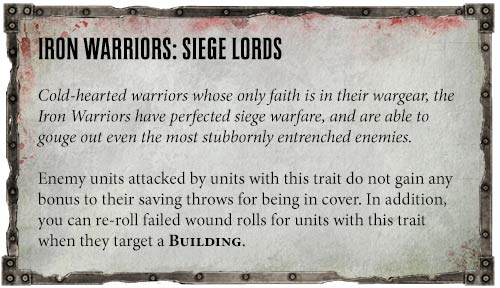 The traditional mainstay of the Iron Warriors are squads of Chaos Space Marines and Havocs mounted in Chaos Rhinos alongside squadrons of battle tanks, Daemon Engines, and Land Raiders filled with Chaos Terminators. However, there are some units that are especially notable within the ranks of the Iron Warriors. 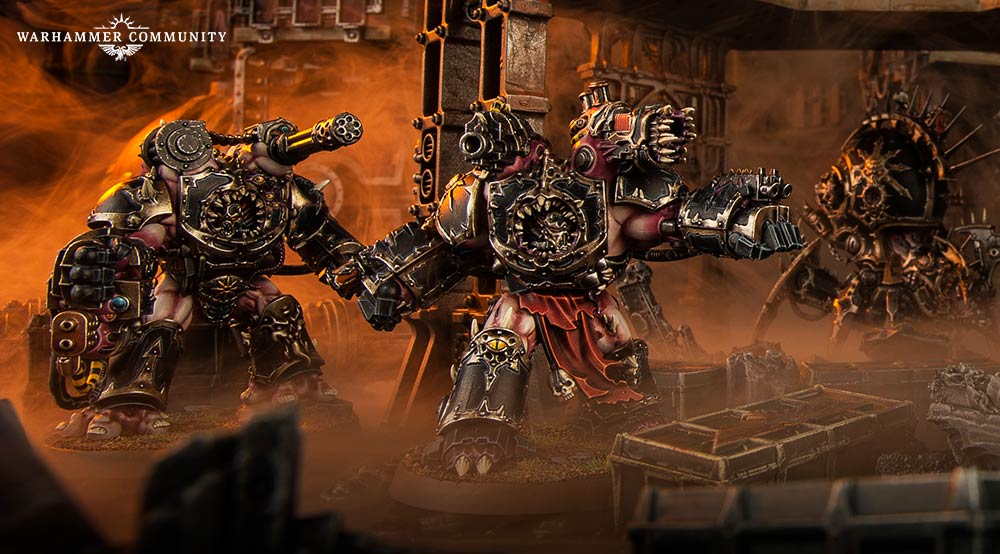 The Iron Warriors were among the first of the Traitor Legions to make widespread use of a Chaos technovirus to create the weapon hybrids known as Obliterators, and these abominations are a common sight among the Sons of Perturabo. Obliterators also form a key part of a seriously shooty Specialist Detachment in Vigilus Ablaze – the aptly named Devastation Battery. 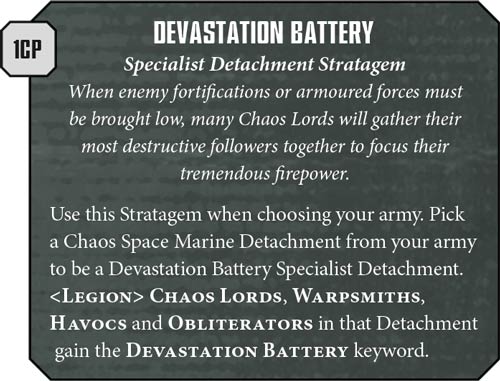 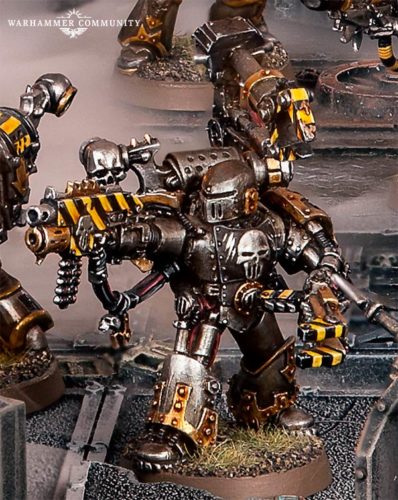 The lords of the Iron Warriors hold the honorary title of Warsmiths, though their ranks and specialisms within the Legion can vary. The majority of Iron Warriors Warsmiths are formally Chaos Lords. If your Warlord hails from a Devastation Battery, you can give them the Armour Bane Warlord Trait, which will greatly augment your anti-tank capabilities on the battlefield – especially when combined with a Chaos Lord’s aura ability to re-roll hit rolls of 1 as well! 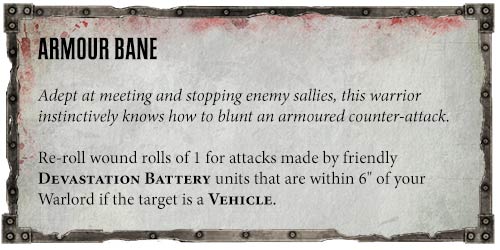 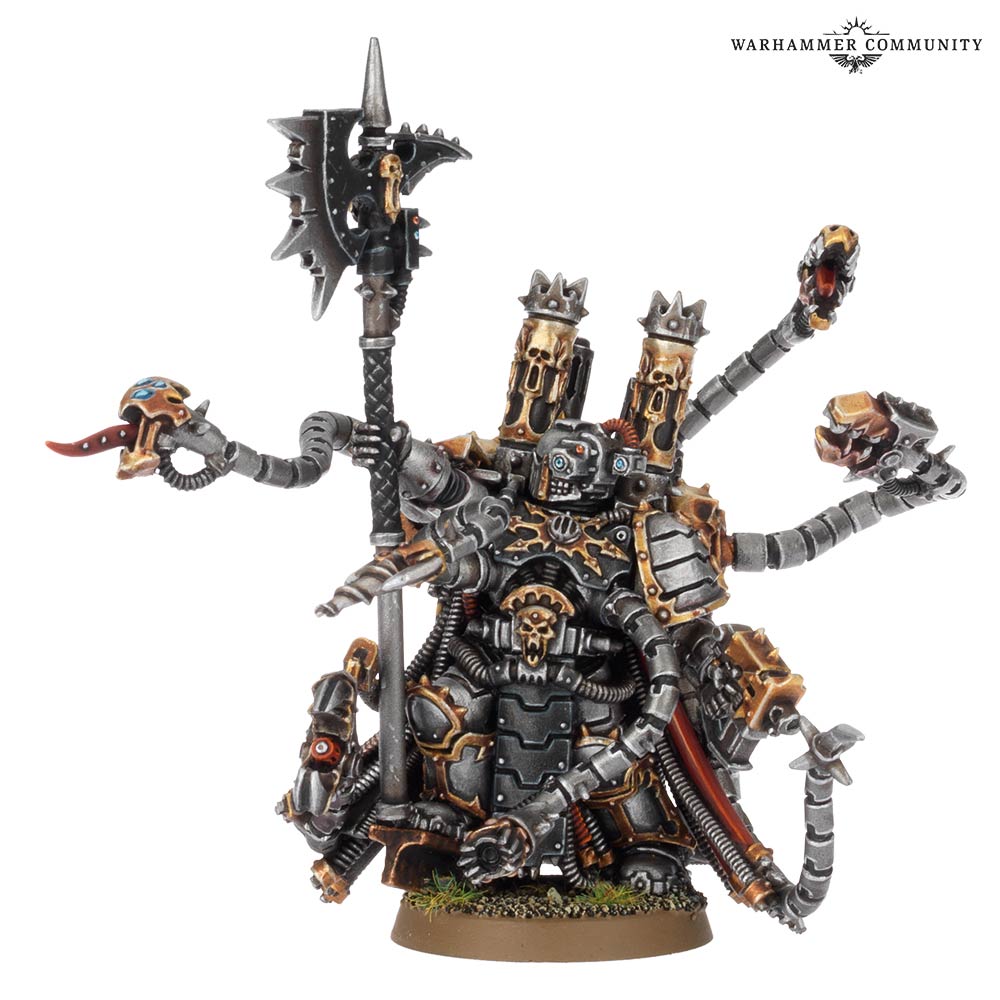 Not to be confused with Warsmiths (the mechatendrils give them away). The Iron Warriors have always held their Warpsmiths in high regard for their ability to maintain the myriad battle tanks and war machines they use. If you’re planning on fielding a vehicle-heavy army, never leave home without at least one of these guys, as they’re great for keeping your vehicles running – or cursing those of your opponent! 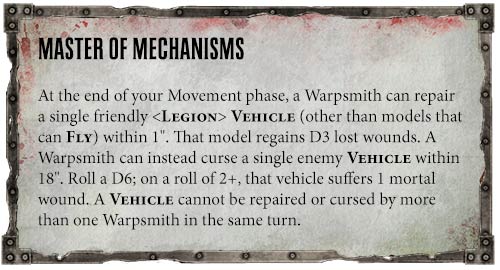 We’ll have more on the Traitor Legions later in the week, so be sure to check back every day for more Heretic Astartes goodness – or should that be badness? You can learn more about the Legion in the action-packed Iron Warriors Omnibus by Graham McNeill, available to pre-order this weekend. If you’re after kickstarting your Iron Warriors collection, the Warhammer 40,000: Shadowspear battlebox is the best way to go, as it includes Obliterators, a Venomcrawler Daemon Engine, Chaos Space Marines and more besides. You can grab your copy of Shadowspear in stores worldwide and online now.

Leave a Reply to ujayim