This Week in the ITC: Standings going into the LVO and Predictions.

You are here: Home › 40K › Editorial › Las Vegas Open › News › Tournament report › This Week in the ITC: Standings going into the LVO and Predictions.

Hello, fellow Warhammer 40k fans! SaltyJohn from TFG Radio, and one of the Las Vegas Open Head Judges, here to bring you a wrap up of this week in the ITC focusing on standings going into LVO and some LVO predictions.

In just one week’s time, many of us will be in Las Vegas on the cusp of the largest Warhammer 40k event in the world! Can you believe it’s here again already? The nerves have already started for some players, maybe a few of the event organizers too, and the forum/facebook/blog/vlog/podcast spheres have been humming steadily with conversations around the LVO, format, lists, list submissions, predictions, the makeup of the field, and what the meta the largest 40k tournament ever will look like. While much of it is ultracrepidarians at their best some of the discussions are more than interesting to hear, should you find a credible source to listen to.  For what will probably be my last article in this series before the Las Vegas Open and the end of the series I wanted to look first at the basic standings one more time. Then do a little prediction work of my own! 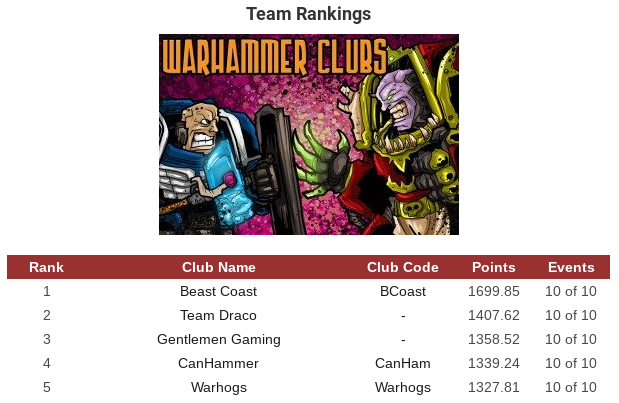 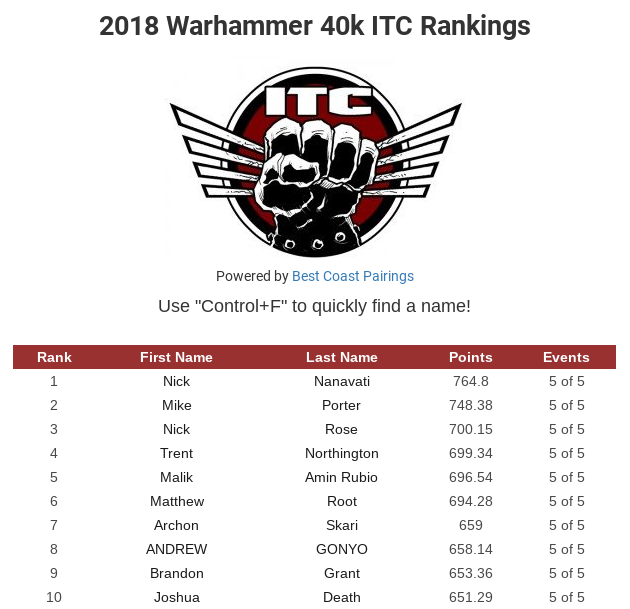 As you can see not much has changed in the top teams or the top 10 for the past month or so. With most of the Majors out of the way before the Christmas season hits at the end of 2018, there just aren’t many chances to add a lot of points to your score before the LVO. Just looking at the top 10 I think that the winner of the ITC will be from that list. While it is mathematically possible that someone else in the top 50 could make a huge run at the LVO and take the top spot, I think it is unlikely. Of the top 10, I think Nanavati, Porter, Root, Rose, and Grant have the best chance(s) of winning the ITC prize. I would not be surprised if the winner of the Las Vegas Open was not one of the names in the top 10 though. I do think the winner of the Las Vegas Open will be from the top 150 players. So let’s take a look at those names. 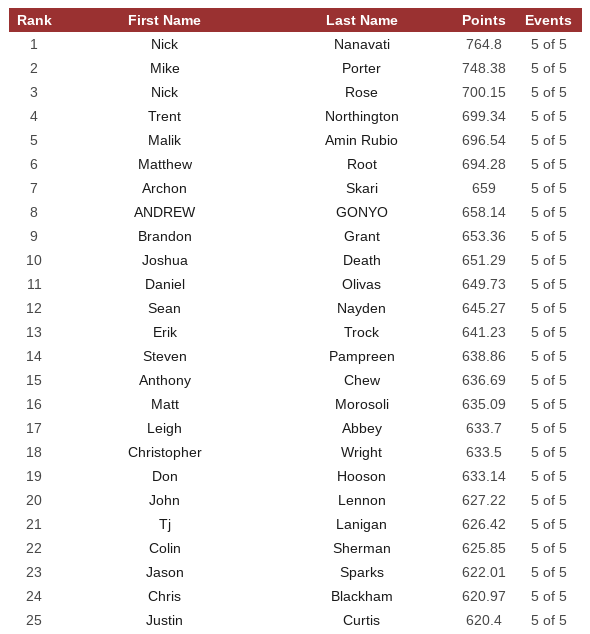 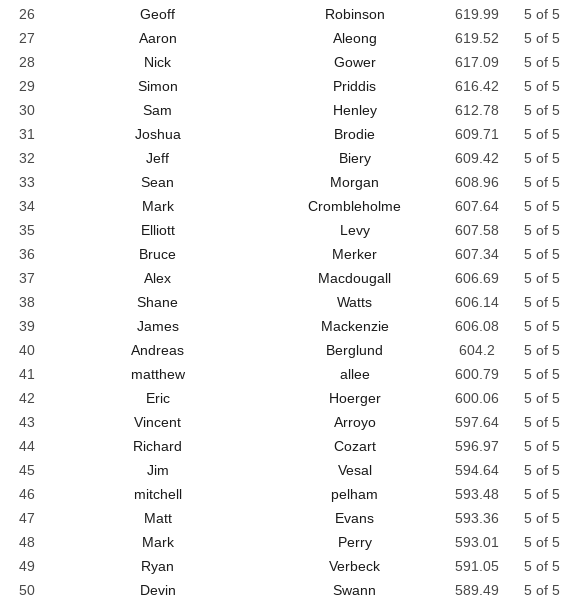 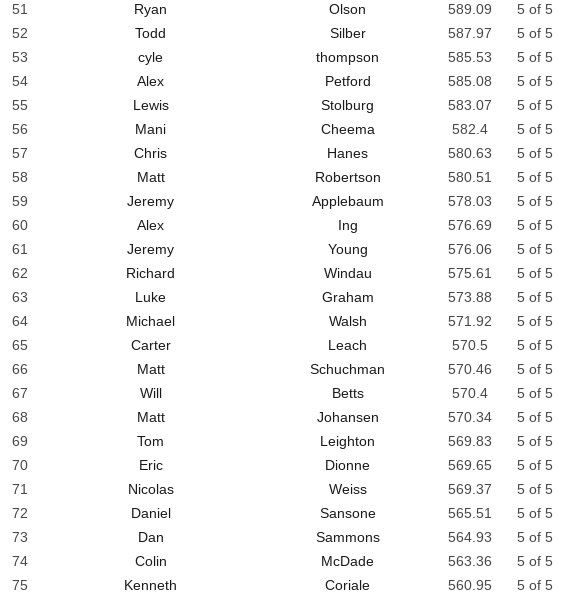 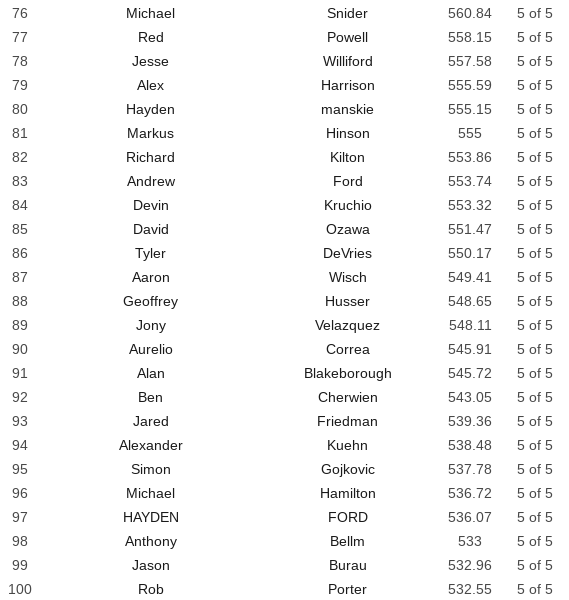 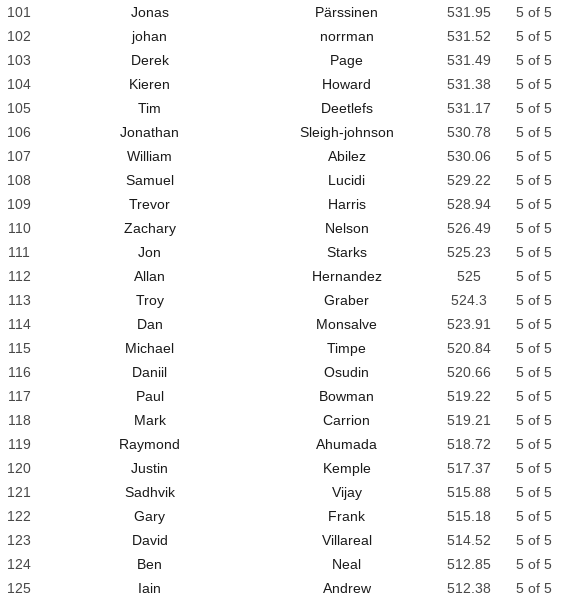 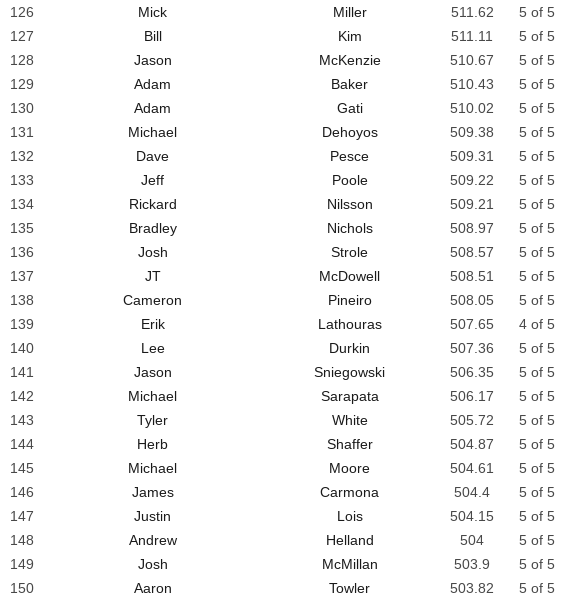 The top 150 Warhammer 40k players in the world are a tour de force of the who’s who of competitive 40k. Every player on that list has the skills, experience, and stamina to make it through 800 players and 9, potentially 10 if there aren’t exactly 8 or fewer undefeated at the end of Saturday, rounds of 40k spread over 3 days in Vegas. The Las Vegas Open is a singular event in competitive 40k. With so many players the field is not only exceptionally diverse it is the single best place to get a feel for the overall meta and health of competitive 40k. Year after year the LVO has provided us with the best data on the health of the game and the makeup of the overall competitive 40k meta, this year will surpass that by leaps and bounds. Standard list submission via the Best Coast Pairings app is going to allow the data on lists, units, and detachment selections to be analyzed in a way that previously would have been a near impossible task. Not only will we see who won, but we will be able to analyze the winning percentages of specific detachments and units in lists. This also means the LVO is the best indicator of who the best players in the ITC really are overall, as it draws the best in the world to face a field filled with the best in the world.

To start off with my predictions for the LVO this year I want to begin with the Dark Horse. I think the chances of a “dark horse” getting into the top 8 is likely. The likelihood of a dark horse winning the LVO is small though, the top 8 is going to be made up primarily of the best players in the world. A person outside that group who made the top 8 primarily on the strength of their list won’t have the requisite skills to best the top players in the high-pressure atmosphere of the Las Vegas Open top 8.

I don’t have a specific player I think will win the LVO, it’s just too diverse a field to make any type of prediction on a single winner. Factions are a bit easier to predict, but only marginally. So I will run through the factions I think will appear in the top 8 and which of those I think have the best chance of winning LVO.

Astramilitarum– Let me state upfront that every AM list in the top 8 will have a Castellan, Gallant, or Crusader in it. If I am wrong on that I will be really surprised.  Astramilitarum has the ability to put the hammer to the other top lists, especially with the new Specialist Detachments in Vigilus. If Orks are the new hotness among the top players, which it seems they are, then Astramilitarum players of similar caliber will be the biggest threat to Orks. AM in the hands of a great player is, in my opinion, the faction with the best chance of winning the Las Vegas Open this year. 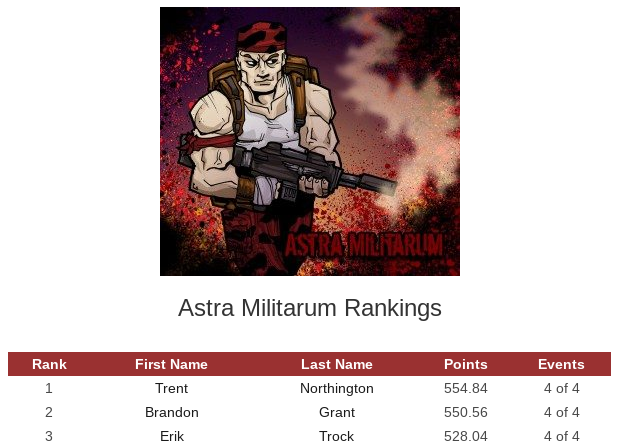 Orks– The sheer number of top players who jumped onto the Ork battlewagon is indication enough of the strength this faction possesses. However, most of the player in the top 150 will be well aware of this shift and have already begun to prepare for it. If you’re playing the faction everyone is preparing for, it puts that faction at a disadvantage to winning the event overall in my opinion.

Aeldari– In this I am including all lists that feature the vaunted Eldar soup. Generally, I think the list will have a majority Aeldari/Ynnari with a smattering of other Eldar like Harlequins or Dhrukhair. I would be surprised if an Aeldari list without access to the Vect strat doesn’t make it into the top 8. Once there I think Aeldari stand a decent chance of winning the event overall, but Aeldari lists have a significant hurdle in the early rounds with so many Knight players and Castellans in the field.

Custodes– The golden boys of the Emperor had a great run early to mid-season. The prevalence of Knight, and subsequently anti-Knight, lists/units in the meta blunted the blades of the Custodes competitively. That said, with the correct allied detachments Custodes have the ability to do some major damage to the other upper tier lists. If Custodes make it into the top 8 I don’t think they will have too big a chance of the overall win. I wouldn’t be surprised to find a list that is AM primary, with a Castellan, and 3 Shield Captains on jetbikes in the top 8 or winning overall. 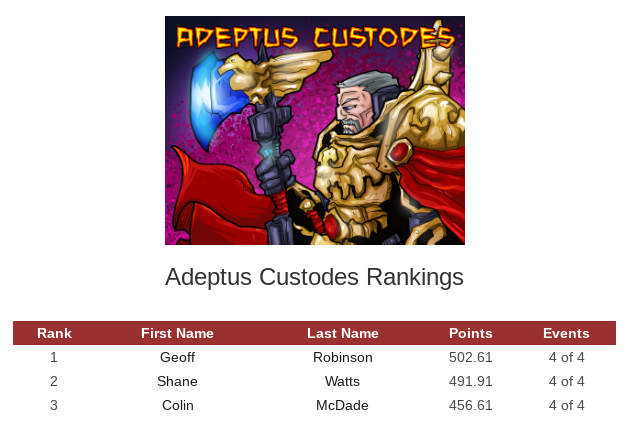 Tau– 40k’s Trade Federation continues to be the most underperforming faction in Competitive 40k. This army has all the tools to be winning faction at the LVO, all it lacks is a clear standard-bearer player. # 3 Tau Player Ken Coriale is the best Tau player that is attending LVO and taking Tau. Ranked at 75 overall Ken has quite the load on his shoulders. Much like Tyranids, the Tau have all the trappings of a top tier army but without the plethora of top tier talent in the pilot seat to bring them to greatness. If a top player can take one of the great builds to the top 8 I think Tau have the chance to play spoiler to most of the other armies that could make it there. This is certainly a dark horse pick, but should it get there, it might be a huge upset faction. 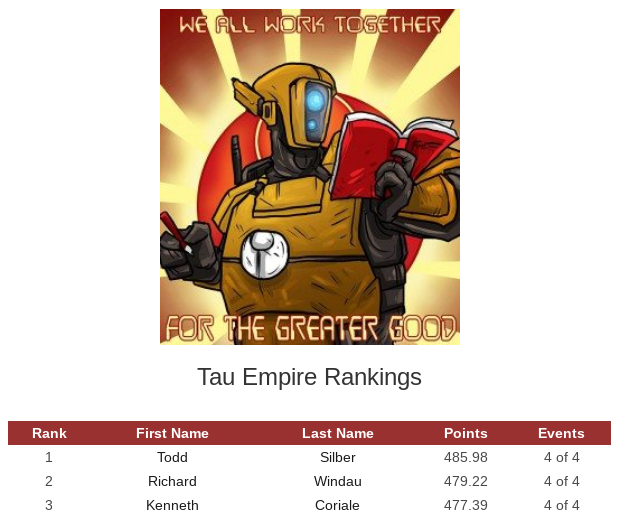 What are your predictions for the LVO? What do you think of mine? We’re just one week away from finding out, hopefully, I will see you at the Las Vegas Open!

I think Tyranids and Tau are the most underrated factions who have a chance at top 8. I also think the odds of Wraithblades making it into the top 8 is strong.

I think post-LVO, GSC have a strong possibility of running over everyone. I think there is a chance that GSC are amazing but haven’t been around long enough to possibly get hit by the nerfbat by the March FAQ, whereas Ynarri / Castellan / Drukhari / Orks all stand a chance of getting a few units toned down in March. If those armies get tweaked a bit, and GSC rise, and Vigilus II gives viable goodies to not just one but several Chaos codexes, I think we will see a balanced and diverse competitive meta in which GSC takes the place of Orks (a top army, but everyone builds lists to deal with them). I am crossing my fingers and hoping the March FAQ and Vigilus II create a double-whammy of changes that are good for the game.

Forgot to mention I think Deathwatch have a good chance of being top 8 and will probably be even bigger presence after LVO as well. I am wondering how many people will be proxying DW at local RTTs….

I can see all that. Predicting that top 8 is mostly a vanity exercise. There are a few groups on FB I have seen where they set up pools to predict the top 8. Pretty interesting but essentially impossible, like brackets for March Madness! It’s still fun to discuss though. You made excellent points.

I also feel deathwatch has the ability to get there…

As a long time ork player I’ll certainly be rooting for da green skins. It’ll certainly be interesting to see how people are preparing for them and knight soup since they’re basically polar opposites. My guess is one or the other will end up winning depending on which army is more countered, but I wouldn’t be surprised seeing some some surprise armies in the top 10 like nids and chaos.

I would be happy to see Orks win LVO.

Great article, John! I really love the analysis and the build in both tension and excitement it captures. Can’t wait to see who is crowned king this year!

Im gonna make a call. SPACE WOLVES TO SAM DAYTON. The Enclave is an up and coming 40k team and Sam, Josh Death, and Tyler Planz will be representing us at LVO. Dayton captures the lead, and hears his name called for best in faction with a top 100 placing at LVO. (Death is my pick to win it of course)