Hey everyone, Reecius here with an update on my growing Beasts of Chaos army for Age of Sigmar!

So while the other members of the AoS learning league are certainly moving along more quickly than myself, I am actually quite happy with my progress as I often don’t have a lot of time to actually hobby. Here’s where I have gotten so far! 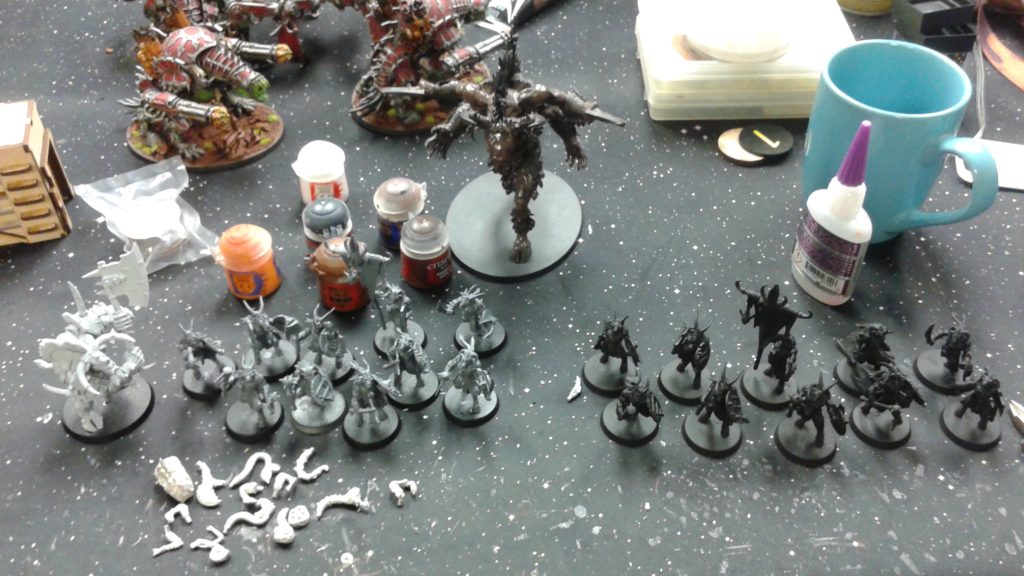 The entire force so far, only about 600 or so points but a good starting point! 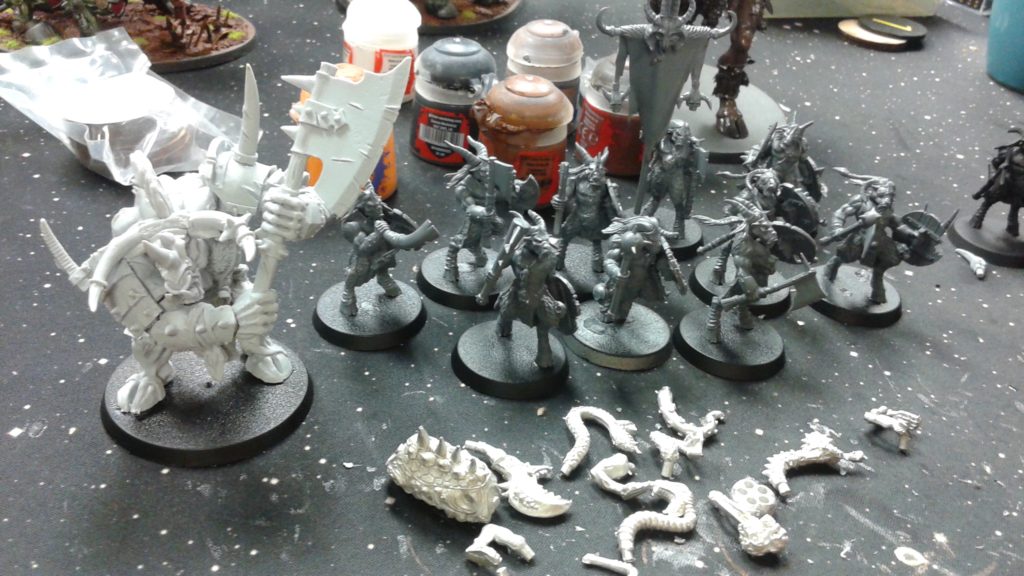 The Mighty Doombull will be laying waste to anything he gets his hooves on! Also in the foreground is an oooooold school Spawn model I have yet to get assembled, but he’s there in all his weirdness, ready to strike! 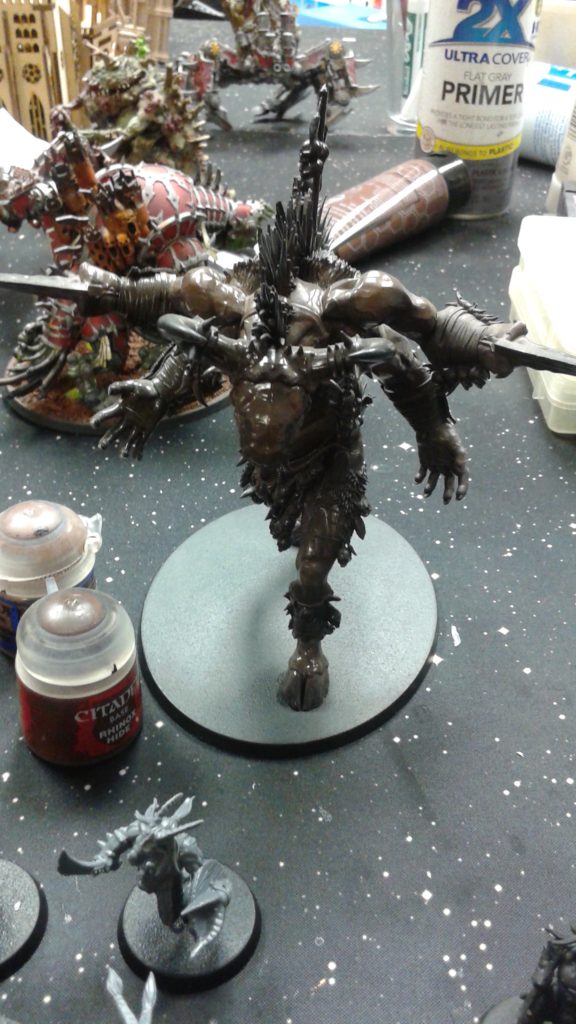 Here’s my Ghorgon with his first layer of dark brown sprayed on. 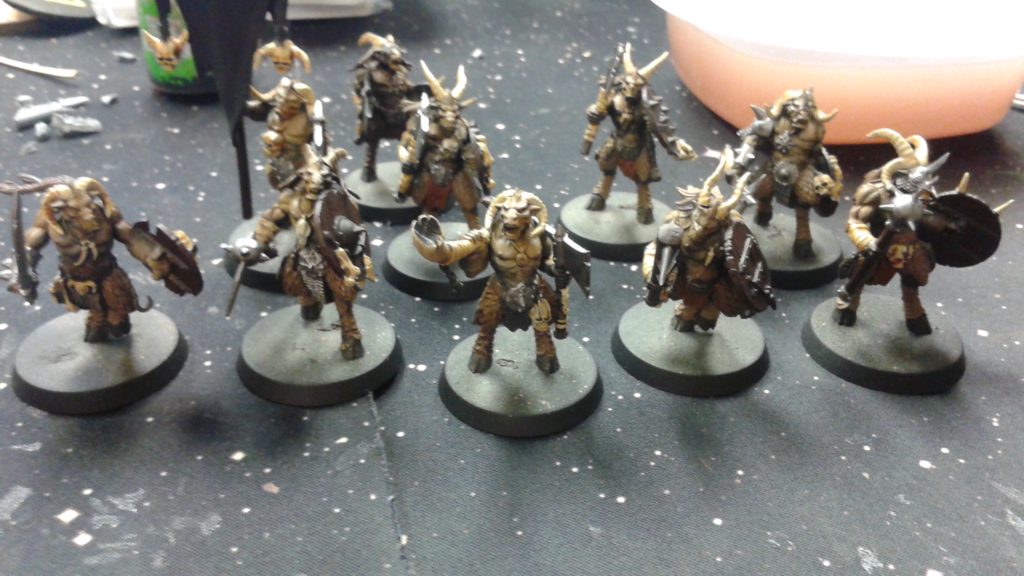 And my first unit of Gors, fully painted! 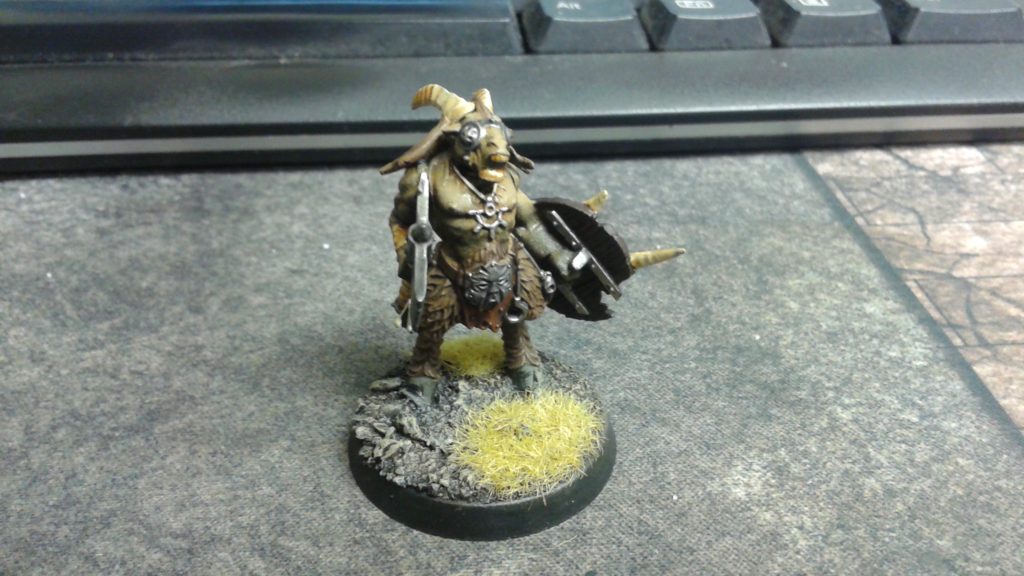 Here’s a closer shot. As you can see, a very simply scheme, not much to it but it looks great on the tabletop. I let the washes do most of the work for me. 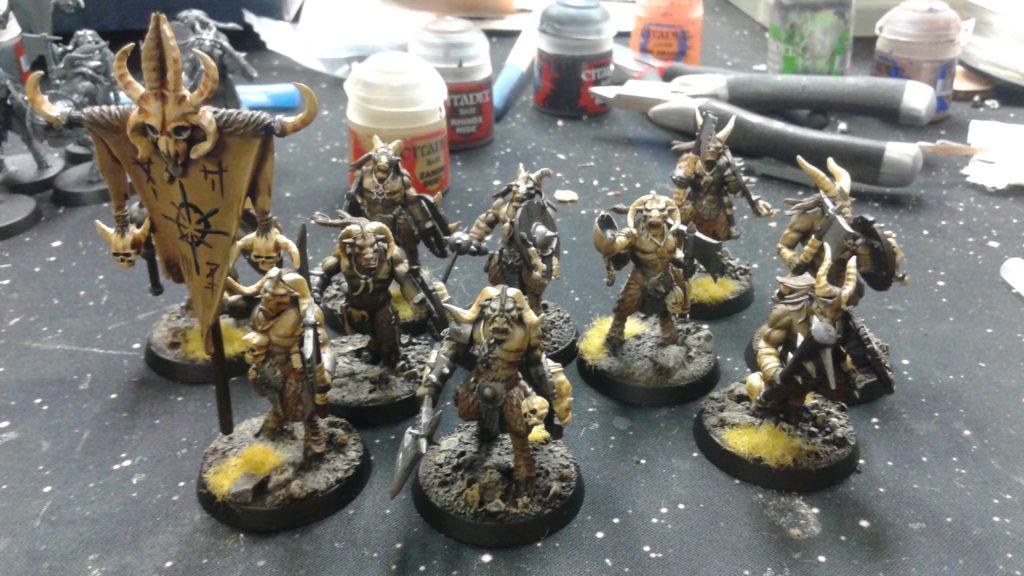 And the unit based! A nice basing scheme makes a massive difference. The unit really looks done now, and while not the most technically spectacular paint job, will look great on the tabletop as an army! 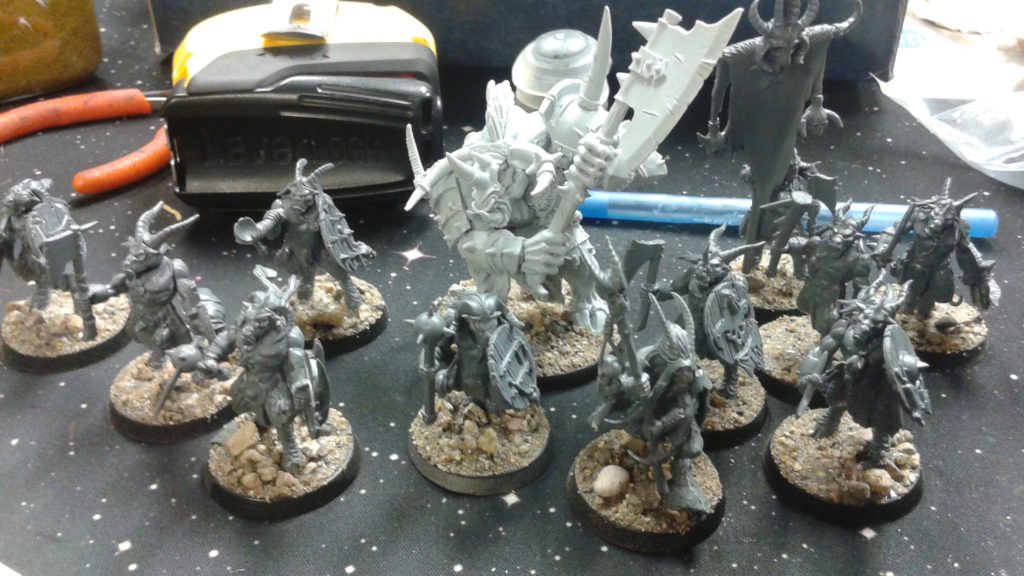 Here’s the second unit of Gors, Doombull and Bray Shaman getting ready to be primed! 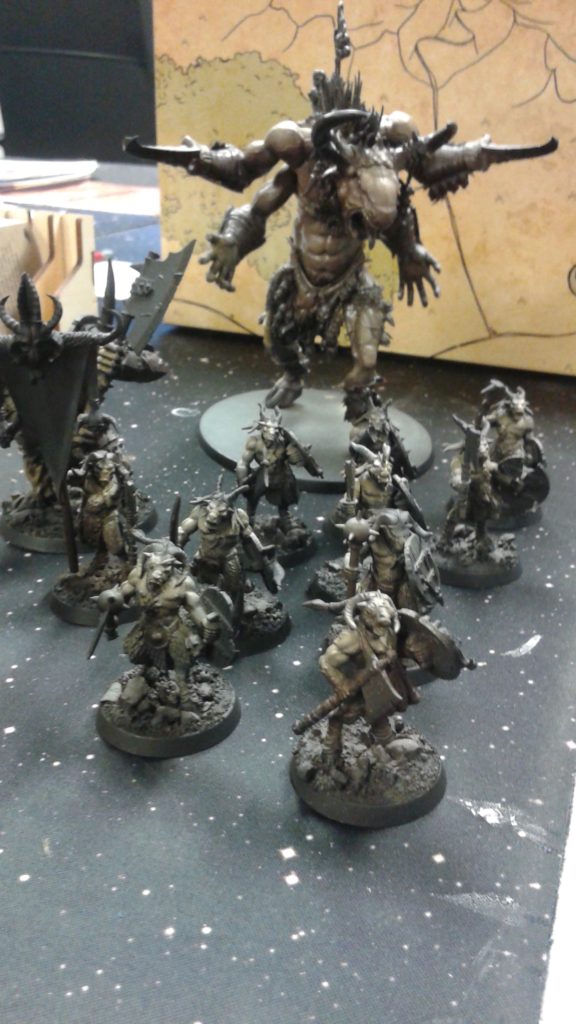 And here you see the remaining units hit with the airbrush, a layer of dark brown followed by a light coat of khaki using the zenithal technique to create natural shading. This is such a useful skill to learn as it does so much of the work for you, and you can get the models to this stage in minutes.

From there, I use a brush to go in and paint all of the individual bits and bobs, then also give them a wash. It’s super easy and looks sharp. 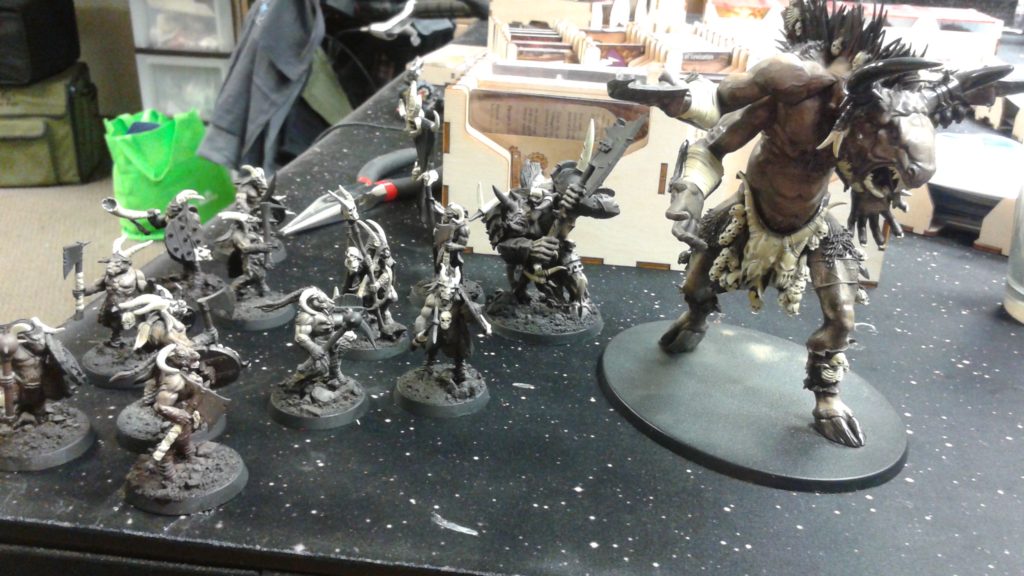 Here they are with the bone colored bits painted. 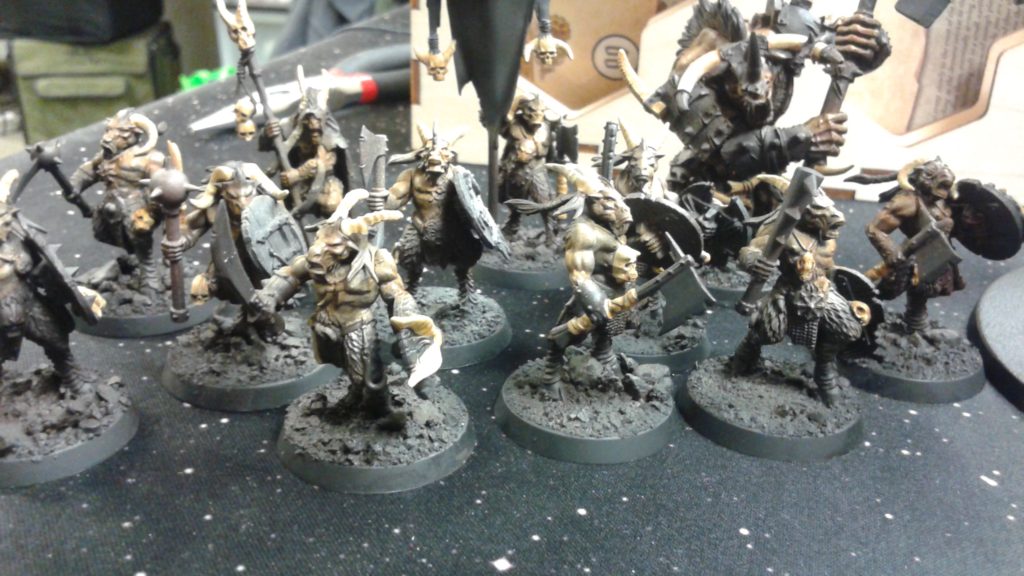 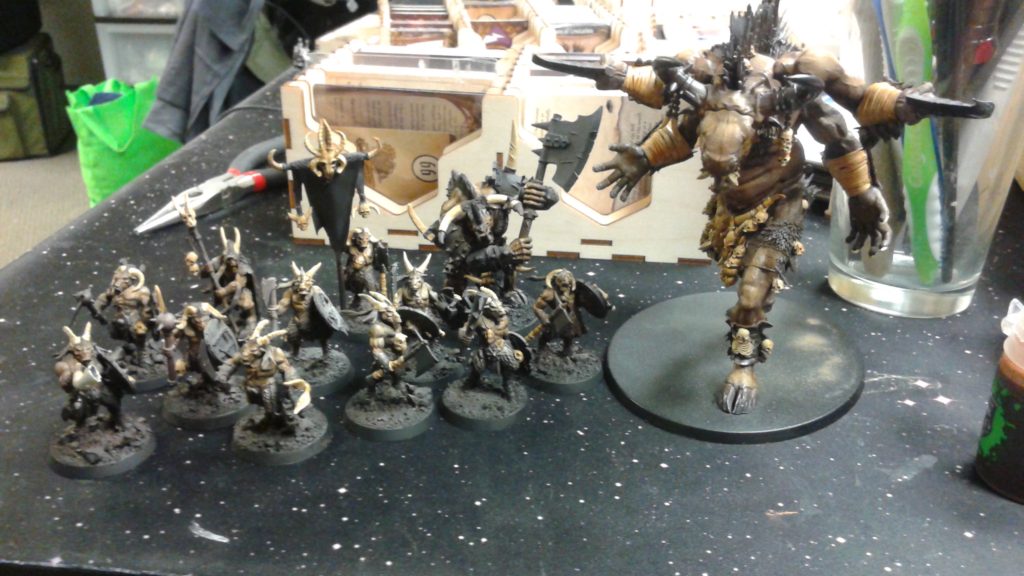 And after the Seraphon Sepia wash, they look massively better! So easy to do, too. Next I will go in and pain the other parts like the fur, hair, wood and metal and give them all a wash too and that is largely that. On the bigger models and characters I will do some more detail work to set them off but the goal is to get them ready to battle quickly and without being a huge PITA.

Tactically, the idea with the army at this early stage is to start on the table with only very tough units like the Ghorgon, Doombull, some Bullgors, etc. and some sacrificial Ungors to use for generating summoning points. I plan on picking up some more cool big models such as  Chimera who hit hard and provide no really soft targets to my opponent. As the game goes on, I should be summoning a unit on to the table every turn, every other turn at the most. I plan on bringing chaff units like Gors, etc. this way and they will handle objective duty while the heavy hitters go in and do the fighting. I also plan on bringing some Bestigors to outflank and spring up where my opponent least expects it!

Looking good! Tabletop quality/looks good as an Army is usually where I target my painting, too. I find I generally get seriously diminishing returns on my time/effort investment past that level.

I remember that Chaos Spawn, too! That was the one that was current when I started playing. Always thought it was a cool Model, but never did pick one up.

Yeah, it works fine and keeps you motivated to actually finish as it’s not such a slog.