Hey everyone, Danny from TFG Radio here to talk turkey, or rather, turkey biomass.  As always, you should also check out The Tactics Corner. It’s like cranberry sauce for your game.  Today, we talk about Lictors (and their special leader-bean), but the silent killers of the Hive Fleet have seen better days, and while they have some utility, they lack the pop necessary to really do their job although Chapter Approved was kind to them. 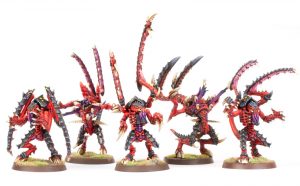 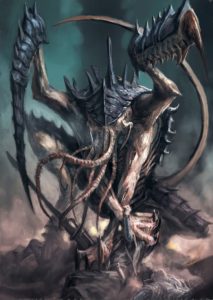 On the plus side, Lictors have a decent wound stat of 4, which makes them relatively resilient, and they are essentially just a bit over 10 points per wound. Chameleonic Skin is a solid -1 to hit modifier (any to hit) and a 3+ save in cover, which is easy to achieve.  Lictors are quite fast with a 9 inch move, and they hit well with WS 2+.  Grasping Talons are not too bad with Damage 2, and a Lictor with S6 is hitting on 2s and wounding on 2s against any T3 character (Like AM Company Commanders).  Hidden Hunters gives Lictors a free reroll to charge on the turn they come out of hiding, which makes a 9 inch charge a bit more manageable, but still, not entirely great odds.  One of their best selling points is that they are one of the cheapest elite slot we have, so if you are trying for a brigade, here you are.  Really, it is a shame that the Lictor is not quite workable, namely because its raw stats suggest an absolute beast, but well, that’s just not the case in practice.

The Hive Fleets do not offer too much to the Lictor either.  Kronos is not too bad as the Lictor can come out of reserves in the enemy’s backfield, chaff permitting, and catch a psyker in The Deepest Shadow, so that’s not a bad tactic.  You can essentially always have the 3+ save Lictor with Jormungandr, which helps surviving overwatch and honestly, just deploying them on the board and having them walk up is relatively viable, but not really needed either. It does help if you are doing a reserve heavy army with Jormungandr where your main punch comes in on later turns. Leviathan gives you a little bit of extra durability with the 6+ Feel No Pain, which is something, if they can stay near synapse.  Kraken is nice for the super extra speed for redeploying and grabbing objectives. Gorgon helps get some more mileage out of S6.  Behemoth offers little that the Lictor doesn’t already gain from coming out of reserve, and well, Hydra is meaningless.

The bad side is that Lictors are now purely solo-hunters, and just one is not enough to get the job done.  If they could still be taken in squads of 1 to 3, even 2, you could mostly guarantee that they could kill a low level character in one charge, which is what they are supposed to do.  Their job is to harass enemy characters and maybe lock up a unit in combat, but with only one model in the unit, there is no way to trap an enemy, and while it might be nice to make a unit fall back that can’t shoot, there are plenty that still can.  To provide some context, a Lictor does 2.7 wounds to a T3 5++ save target, so on average dice; a Lictor doesn’t kill a Company Commander.  This of course assumes that you were somehow able to land near that Company Commander since the big advantage of Lictors, being able to jump out of terrain, is easily countered, especially with whom they seem built to kill, T3 minor characters who tend to roll deep. With only a 5+ save, Lictors are still pretty squishy in combat.  3 attacks is just not enough heat for them to have much chance to kill a character or even do any real damage to a small squad or light vehicle.   Especially since just about less than half of your charges will fail, even with the reroll, the Lictor just isn’t quite the assassin-bug it used to be.  They are now cheaper at least, so one Lictor is a single point more than Ripper Swarm.  Lictors are best used as objective campers, and well, rippers do that just fine and are slightly cheaper and are obsec.

45/100. Needs some work to be passable, and while taking a few is fun, they are just not good enough at their job to be included, unless you want to run a Brigade and need a cheap elite. Really, that’s the only reason to run them. Except for Kill Team. They are beasts in Kill Team. 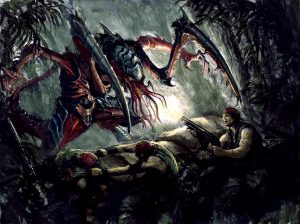 So the bad mammajamma that is Deathleaper was demoted from a cheap HQ to a semi-cheap Elite.  Deathleaper is still a character, which is nice in terms of protection.  Deathleaper is now much cheaper at only 60 points, which is a much more acceptable price tag.  Superior Chameleonic Skin is pretty intense with a flat -2 to hit modifier as well as providing a 3+ armor save in cover.  Shooting overcharged plasma at Deathleaper is bad, bad idea.  It’s After Me! underwent some revision again, just giving the bug reroll hit and wound against a nominated character, which is cool and fluffy, but yah, not at all ideal.   Deathleaper no longer has a morale debuff, and now that it can’t land near anyone, it really is just a more expensive lictor.  Really, the best part of Deathleaper is that it makes an excellent objective holder as it is annoying to kill with the Character keyword and a flat -2 to hit, and with 4 attacks that do 2 damage each, it can be somewhat threatening to weaker units.   Really, DL is just very much a major pain to kill at range when it sips tea on an objective, which if you are building a more aggressive army that often does not leave much in the back, DL can get you some secondary points for sure.

The problem with Deathleaper is again, it is vulnerable to counter-play and much easier to counter-play than the index, and with only 4 attacks, there is certainly no guarantee that Deathleaper is going to kill what it hits.  It is a gamble, and Deathleaper is highly susceptible to just bad dice, especially for a unit designed to murder one important character and then likely die.   Really, all the same problems exist for DL as any other Lictor.  The only advantage that Deathleaper has is that it is a really, really annoying backfield objective camper as it a character with a -2 to hit aura (that is affected by a venom/malanthrope).  It can be almost impossible to shift Deathleaper from a far-out objective, and that is something to consider.

65/100. A missed opportunity for awesomeness, and again, really best for just holding an objective somewhere, but thanks to a nice points reduction, I can see an argument for taking Deathleaper when you are building a list that doesn’t have a lot of strong objective game.

That’s it for this edition of Tyranid Talk, and as always, thank you for reading, and be sure to tune in next time.  Also, don’t forget that the LVO is creeping up on us much sooner than you might think.

Lictors got oversimplified, and some of their signature rules became awkward stratagems, or just disappeared. They lost their soul, and became plane slot fillers.

I hope some day they will get a total rework (including their stratagems), and not just a cost adjustment, as they were one of the most fun units to use with Tyranids. Is the only thing I miss from previous editions.

Yeah, I’ve run them a couple of times, specifically because I was filling out a Brigade, and they’re just underwhelming.

Jormungandr doesn’t actually work with them as well as you might think. With the way it was errataed, they lose the Jormungandr Cover bonus as soon as they declare a Charge, so it doesn’t apply against Overwatch.

I’m honestly not entirely sure it even works for them at all. Chameleonic Skin specifies that they be “in cover”, while the Jormungandr Trait gives them the “benefit of cover”, but doesn’t actually make them count as being “in cover”. The distinction has been important in some editions, and I don’t know whether or not it is in this one. I submitted it for the FAQ, but apparently they didn’t think it was worth answering.

Oh well. At least we have Kill Team.

I’m still disappointed that we didn’t get our “generic -1 to hit” in Kill team. Especially when playing against Tau and their Stealth Suits. I never want my lictor to be not in combat, which means most of the time, people are shooting via overwatch, which means there is no benefit from cover. And if I’m not in combat, they get some way around my cover, and I get no benefit whatsoever… Plus, in combat with those darn stealth suits, I’m *still* taking -1 to hit, and they are laughing without penalty…

Flesh Hooks are “Strength User”, so should also be S6. Not of huge benefit, but might be worth an extra point (out of 100) 😀