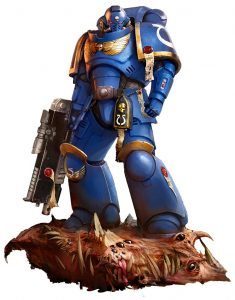 Hi everyone, Michael here with the first article in my attempts at a Primaris Space Marine army. For more tactics and analyses, check out the Tactics Corner.

When the Frontline Gaming Primaris Project started, I was intrigued and inspired to start my own force. I was wanting to add a few Primaris units to my Dark Angels (particularly those Hellblasters!) to see what they could add to the force.

I must admit, I wasn’t too enthused with the Primaris Marines when they were first announced. However, on getting some of the models and painting them up, my attitude has changed. They are simply beautiful models to paint up. The increased scale of the Primaris Marines compared to regular Space Marines makes them much easier to paint, for me.

I like the nice, crisp lines of the models and the lack of clutter on them. I’ve never been a big fan of “bling marines”, adorned with tons of purity seals, swinging chains, banner poles, etc. For this reason, the Primaris range had a good appeal to me. 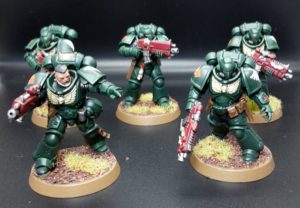 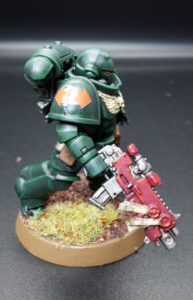 It would also be a nice tactical challenge to do well with an all-Primaris army. They lack a lot of tools that regular Space Marine armies have access to, so I think they will prove rather challenging to play with in most games.

I decided I would add the Marines to my Dark Angels army. I like the Dark Angels in 8th edition. I think they are a strong force, but not ridiculously overpowered. Grim Resolve is a solid Chapter Tactic, giving me essentially “free” Captain re-rolls if the unit did not move. In addition, you can’t lose more than one model from a failed morale test. This allows you to go for big squads if you want, without losing half of them to a bad morale test, allowing you to maximise the bang for your buck with stratagems. 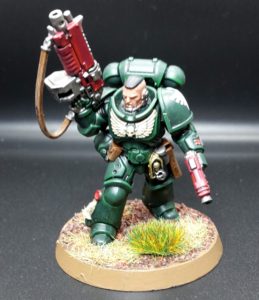 I started off with the Dark Imperium boxed set. This is a great way to get a number of Primaris units for cheap (especially if you use the discount at Frontline Gaming and/or sell off the filthy chaos scum you get in the box!). I added a number of units to the army over time, most of which are awaiting assembling and painting. At the moment, the units for my army consist of:

As you can see, this forms a strong basis for the bulk of the army. All I am missing is a unit of Aggressors and a few characters to complete the Primaris range. 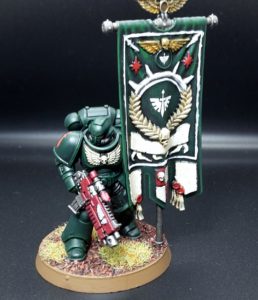 This gives me a good mix of units to test out in my games, to see what works and what doesn’t. Another benefit of the Primaris range is the “easy to build” range of kits. These give you a cheaper way to fill out your army. They are a bit more limited in posing and wargear compared to the regular kits, but come at a good discount compared to the full kit. I was also able to pick up a few issues of Warhammer Conquest to bulk out the army, getting some cheap models and paints to add to my collection.

With the models in hand, I painted up an Intercessor as a test case. I used the Warhammer TV video to get an idea of the scheme I wanted.

I was quite happy with the test model, so continued to painting up a number of units for the army. At the moment, I have one Lieutenant, the Ancient, 10 Intercessors and 10 Hellblasters painted. The army is not legal yet, so I need to get the Master and a few more Intercessors painted up. 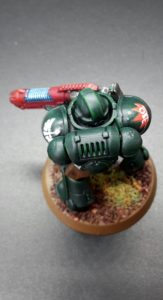 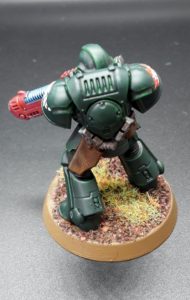 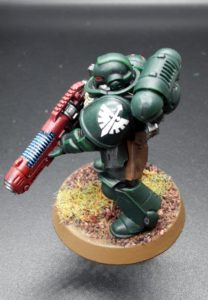 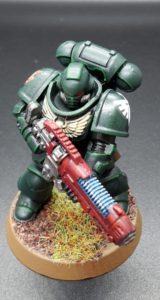 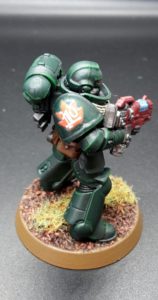 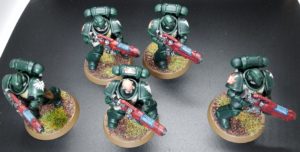 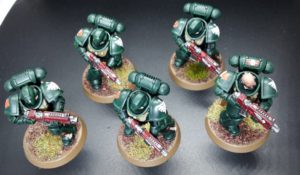 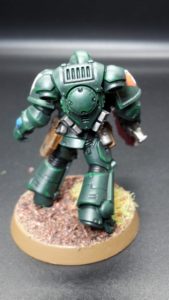 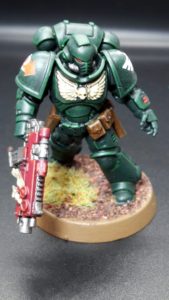 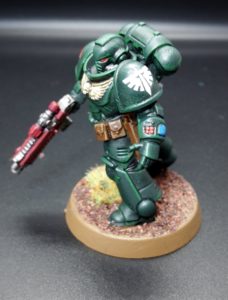 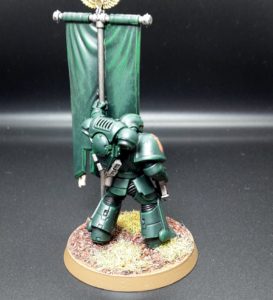 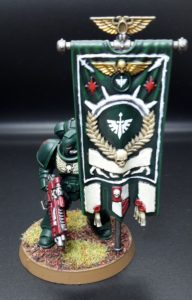 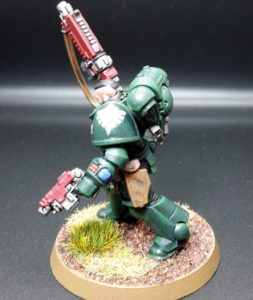 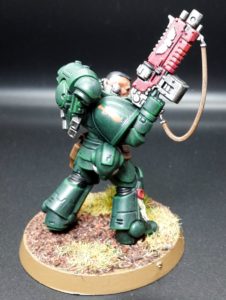 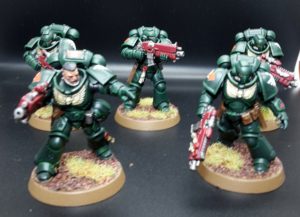 I hope to bring you regular hobby updates as I get the force together, as well as tactics articles and battle reports from the army when it is put together.

If there is anything you would like to see, please let me know in the comments below.

Your army is looking great, Mike! I love Dark Angels, my very first army in 40k.

Cheers Reece! The Dark Angels were also my first army in 40k, and I’ve been using them ever since.

The Primaris have done well added to the bulk of my Dark Angels army, but I am interested in seeing how they perform on their own.

Yeah, my own Primaris Project (which has been cursed with delay after delay, lol) is finally near a point where I can field an army so it would be cool if we kind of both posted on this at the same time to get the different perspectives.

I don’t want to put words in mouths, but as a marine player I think there would be a lot of interest in reading about both of your armies

I agree, I think it would be quite popular.

Put me down for that interest.
I’d love to see some details on which way units were used, and how they did.
I’ve got interest in all the primaris units, but only a paper level understanding of them. Some real game experience would be great to hear about.

Glad there is some interest in this still.

I’ll be writing up all my battle reports with the army, and hope to point out any tactical issues that come up during the games.

YES! I have been trying to make my own primaris army work and would LOVE as many articles as possible discussing the tactics because I’m having a lot of trouble getting them to win.

currently I’m trying a lot of plasma inceptors dropping down and trying to blow things up but the problem is with primaris captains and Lts not having access to jump packs I often find my big power punchers dropping in with no re-roll support. (sad to see a plasma interceptor blow himself up)

Anyway, I’m stoked for this series AND for Reece’s series to come back so i can learn some new tips and tricks!

Hopefully, we’ll be able to provide some tactical insights, even if it is what not to do!

I’m going to be working on getting the force painted up quickly to get them on the tabletop. I normally try not to play with unpainted models, but might relax this to start getting a few games in with earlier. I can at least undercoat most of them and get them on the table.

Well you do have a patrol detachment already painted so you could get some games in.
My own Primaris project has been stalled by the fact I decided to use the Luna Wolves colour scheme then realised after I started painting I’ve never done white armour before! Now it’s do i continue or slot them into my Raven Guard/Space Wolves.

White armour isn’t too bad when you have practiced it a few times. I have about 5000 pts of White Scars painted up and they look pretty decent.

Here’s the recipe I use:
1. Undercoat the model in white
2. Give the whole model a wash with Agrax Earthshade.
3. Drybrush with Ulthuan Grey
4. Drybrush with White Scar.

That gives a good coverage for the armour. You can then pick out the rest of the detail on the model. I generally paint all the metal areas with a basecoat of black, followed by Leadbelcher, I find it gives a better coverage than on the white undercoat.

Cavalier did a great article on here a while back about painting white (https://www.frontlinegaming.org/2018/06/08/painting-white-is-easy-heres-how/). I’ve been using a very similar approach for my Elucidian Starstriders and it’s working really well. Just to give you another option. Mike’s stuff looks great, but White Scars like a warm white, and this will give you a cooler white that might be better for Luna Wolves.

Michael and Reese — You guys have randomly perfect timing.

I painted up a bunch of Dark Angels back in 1998 or so, played for a bit, then gave them away. But I’d heard good things about 8th Edition, so I tracked down those original minis (sitting in the garage of the guy I gave ’em to). Now I’m playing with them to relearn the rules while I start painting up DA Primaris.

And you’re right, Michael, those Primos are a joy to paint.

Both the tactical stuff and the hobby stuff is useful to a guy who took a two-decade vacation from Dark Angels and is getting back into the Inner Circle, as it were.

Welcome back to the hobby, Dave! I’ve been playing since 3rd edition and must say that 8th edition has been really good for me so far. I love the way the game plays now and the community involvement we are seeing from GW.

My initial posts are going to focus on the hobby aspect and building the army, as I put the force together, so I hope you enjoy that and find some use from it.