Charlie here from 40kDiceRolls, here again to discuss, not a bird, not a plane, but the T’au Empire’s  Razorshark Strike Fighter. As always, for more tactics articles, check out the Tactics Corner! 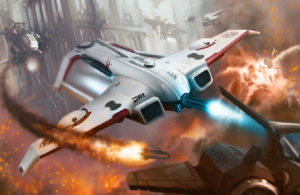 Capitalizing on its remarkable maneuverability, the Razorshark provides support to Fire Warriors in the heat of battle. A variant of the Sun Shark Bomber, the Fighter trades the drones and pulse weaponry for extra thrusters (increasing its agility) and a powerful ion turret. Purpose-built to engage ground targets, the Fighter can also mount offensives on airborne enemies, making this gun ship a well-rounded and versatile tool at the T’au Empire’s disposal.

On the tabletop, the Razorshark is a single model unit, Flier role.

If you thought the Sun Shark Bomber was a questionable take, the Razershark Strike Fighter is even worse off. To start with, it’s a fairly generic profile with a fairly generic set of special rules. A stereotypical T’au BS4+ is as good as you can hope for and it will degrade as wounds are lost. The movement of 20-50″ falls in line with many other fliers. Most of note is its resiliency, which at T6 W12 and Sv4+, it won’t be keeping it around long against dedicated firepower or even non-dedicate light arms en masse. Like most Fliers, it is hard to hit which does directly translate into a longer lifespan and is appreciated. It also suffers from the potentially precarious pivots and movements that most fliers are subject to. Lastly, like nearly every vehicle, it can explode. There’s really nothing here that you won’t have seen before in some shape or form.

Uncommon to T’au, the Fighter does possess a method by which to routinely increase its chance to hit while not requiring some third party support (for instance, markerlights). The main weapon on the Fighter, the Quad ion turret, gets a +1 on To-Hit rolls if that weapon targets something without the <Fly> keyword. This is a nod to the fluff, which is always appreciated. It also means that as long as you are shooting at something that does not have the <Fly> keyword, you can safely overcharge without worrying about taking a mortal wound. However, the rest of the fluff that states it’s a formidable and scary ground support platform seems to have been lost in translation. The biggest letdown is just in the small number of shots it puts out. It’s default loadout puts out 4 S5 shots and 4 S7/8 shots every turn and that’s it. Yes, I won’t forget about the fact that it’s a Seeker Missile platform, but those are “one and done”. I personally think the Missile pod is expensive as it is and I don’t like putting expensive weapons on a flimsy chassis, so normally would advise to leave that off.

Many other units can provide that level of firepower and a LOT more, typically on a more resilient chassis too. I think the crux of the issue stems from the point cost of the Quad ion turret, which is currently 45 point. Compare that to an Ion cannon for 35 points. The Ion cannon has twice the range, twice the AP and flat 2 and 3 damage for its dual profiles. Meanwhile the Quad ion turret is ~30% more expensive, gets one additional shot for the standard profile, adds 1 for To-Hit rolls in some cases, and has a variable D3 damage on the overcharged profile. Don’t get me wrong, the Fighter is far from expensive at around 140 point, but you just don’t get a lot for that cost.

There are more reasons not to take one, if I haven’t convinced you yet. Since it doesn’t have drones embarked, you can’t really use it to make a ploy for grabbing a far-off objective like you can with the Bomber. You don’t inherently get a ton of CP from taking fliers, and T’au need CP to take advantage of some key stratagems. It also doesn’t have the For the Greater Good special rule, so it won’t help in overwatch. Really, it can’t kill a ton of stuff, it can’t buff your army indirectly with CP’s, and it can’t hold objectives.

So that leaves me begging the question, “Well why would I take one, then?”. The reasonable answer is that you wouldn’t. However, if we try to think outside the box, acknowledge that we are not making a list for the LVO and open our mind to new possibilities…It’s a pretty big model and base. Knowing that it’s not a big point sink, you could realistically fly a couple of these forward and try and block some charging lanes for your opponent. Since <Fly> only really takes effect in the movement phase now, deploying or maneuvering one of these right in front of something you don’t want charged is a way to defend against that. Plus, you don’t care too much if it is destroyed so you shouldn’t have any qualms about being as aggressive with it as you can. Charge other fliers to get free movement and reposition yourself for your next pivot/move. Make your opponent have to interact with it and it just might be a useful tool. Otherwise, a savvy opponent will understand they can completely ignore it.

Let’s also not forget about the fact that it is a Seeker Missile platform and that’s not something to be overlooked. Seeker Missiles are pretty great so if you somehow convince yourself to include a Fighter in your army, don’t forget about them. Just also remember that there are much, much better platforms to take them on. 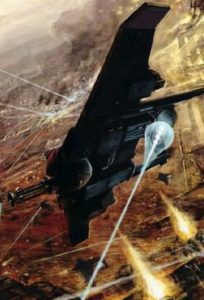 Countering the Razorshark Fighter is similar to countering the Sun Shark Bomber in many ways. When playing against any Flier, a detailed understanding of how they move is key. Understanding that the Fighter can pivot up to 90 degrees before moving up to 50″ but at least 20″ can influence some of your decision-making. Under certain circumstances, you can block off movement avenues for the Fighter and could even potentially keep it from making its minimum necessary movement – resulting in its destruction. At 30″ it’s most imposing main weapon can be outranged and out-maneuvered too. It will also have a hard time staying in range of a singular target for more than a turn, so you can weather the Quad ion turret for a turn and then probably be out of range for its next shooting phase.

It’s also fairly easily countered just by shooting it. Even a few auto-cannon shots can put a large dent in the Fighter and should you dedicate more serious firepower than that, like a las cannon for instance, you’ll face no serious hurdle from shooting it off the board. Don’t forget that assault units with <Fly> will also make extremely quick work of it too.

The Razorstrike Fighter is one of the most bland Fliers I’m aware of. It provides no source of significant firepower by its inclusion in your army and though not expensive, is not worth what it does. The T’au army is lucky enough to have several good tools at their disposal and should you consider the Fighter in your army, you’ll be hard pressed to find justification for its inclusion over some of the more-alluring options like Hammerheads, Riptides, Fire Warriors, Coldstar Commanders, etc. Maybe CA will bring some point reduction to the Quad ion turret or a fun and unique new rule to the chassis. Or maybe mine will stay on the shelf, collecting dust for another year.

What needs to change to make you consider the Razorshark Fighter?

Missile Pods really should be more like 12 or 15pts, the way Autocannons are, not 24pts. 24pts is a ridiculous amount for that weapon profile.

12pts at most, I don’t think being assault over heavy balances out the -12″ max range or random damage.

That could even make a back-field 4xMP Commander a thing, which I’d like.

Dakkath
Reply to  Charlie A.

You and me both.

The Razorshark is in such a sad place that a sensible price point on the missile pod would make zero difference to me wanting to take it. That bird just needs a rules overhaul.

A sensibly priced missile pod would have me using Crisis Teams again but not the Razorshark.

It wouldn’t really change a lot for the Shark, no; certainly still wouldn’t be competitive, but it’d at least be a bit more useful. I think a few tweaks to the chassis (3+ armor, 15-20pt price drop) would actually make it pretty solid as a choice overall; the ability to take a support system from the battlesuit list would similarly give it a lot more utility.