Welcome to Clan Fokus – a new series on Warhammer Community where we’ll be taking a closer look at all the new Clan Kulturs in the new Codex: Orks. These powerful special rules let you tailor your play-style and offer huge benefits to nearly every unit in your army. We’ll be previewing a new Clan Kultur every day this week – looking today at the Deathskulls.

You never really own a gun in the 41st Millennium – you merely look after it for a bit until an Ork takes it from your cooling corpse. No Ork clan demonstrates this shamelessly larcenous quality better than the Deathskulls – avaricious, superstitious Orks who’ll steal anything that isn’t nailed down… after which they’ll steal everything that is nailed down. Including the nails.

But how do they get away with it without getting clobbered first? ’Cos dey’z lucky gitz, of course! Orks hold to a number of simple but utterly unshakable beliefs, the two most prominent being that red ones go faster and blue ones are lucky. The Deathskulls exemplify the latter, daubing their armour, vehicles and clothing in blue to ensure their luck will be as outrageous as they can get away with. But how does this affect ‘da Boyz in Blue’? Let’s take a look… 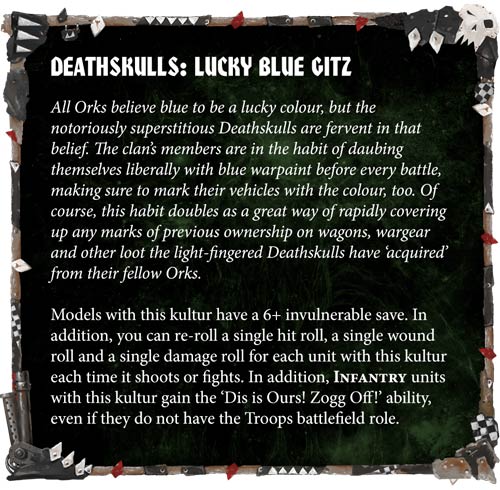 Blue paint is actually lucky (well, for Orks, anyway). In fact, it’s so lucky that every Deathskulls unit gets a 6+ invulnerable save! From gaining a chance to save against those pesky lascannon shots on your Deff Dreads to adding a little bit more durability on your hordes of Boyz, what’s not to love? And you get a series of auspicious re-rolls whenever you’re shootin’ or krumpin’ stuff (all the better for lootin’ their gubbinz afterwards, of course). What’s more, having “Dis is Ours! Zogg Off!” – a rule that gives you priority when you score objectives – on no less than all of your Infantry units helps you keep a control of the battlefield. Lucky gitz indeed!

The Deathskulls know better than any that to steal something, sometimes you need to blow it up first. That’s where Tankbustas come in. Like before, they get re-rolls to hit against all Vehicles but combine them with the Wreckers Stratagem and they’ll be smashing their way through Land Raiders, Imperial Knights and any other particularly durable targets with relative ease. 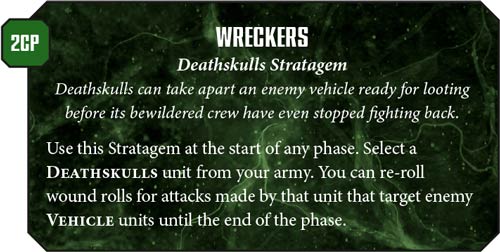 Tankbustas get even deadlier when combined with the Extra Stikkbombs Stratagem. By allowing every model in the unit to throw a Grenade weapon, you’ll be able to douse the enemy in Tankbusta bombs – a deadly deluge that few could hope to survive! 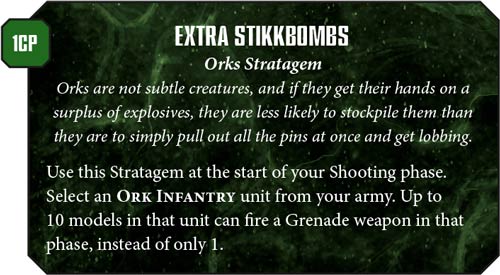 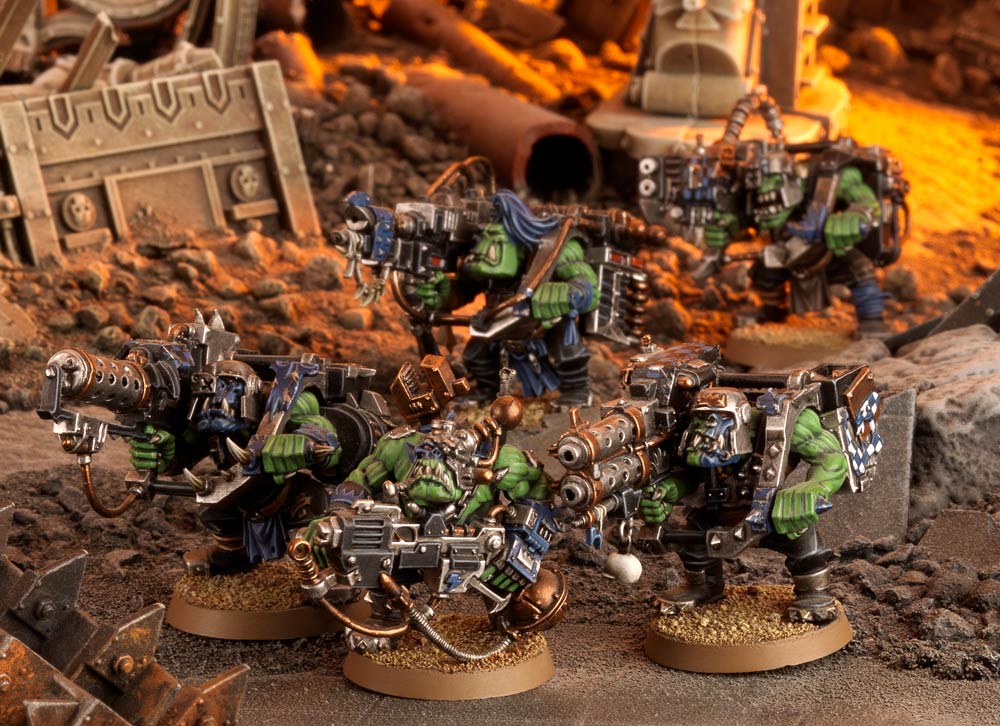 Lootas are a great choice in an Ork army, thanks to their excellent long-ranged firepower. Capable of blowing apart infantry and tanks alike, these ladz are a cracking choice in the new codex and benefit enormously from a brand-new Ork Stratagem that really lets them live up to their name – Loot It: 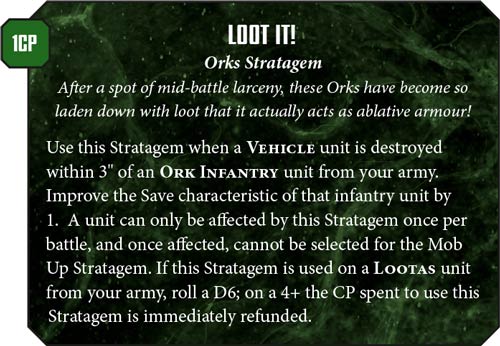 As this Stratagem can be activated even when one of your own vehicles is destroyed, it can be surprisingly easy to utilise. This Stratagem works for most Ork infantry, but is particularly useful with Lootas, who give you a chance to recover the Command Points you just spent on it!

Scrapping vehicles, mobbing objectives and shrugging off krak missiles with nothing more than a lick of blue paint – the Deathskulls really are something. If you’re looking for a cracking all-round Clan Kultur, then like the Deathskulls themselves, you’re in luck! You’ll be able to get your hands on the Clan Kulturs for yourself soon, as Codex: Orks is available to pre-order tomorrow!

But that doesn’t mean we’re done yet – we’ve also got another preview planned for tomorrow, where we’ll be looking at the sneaky Blood Axes, so check back soon…