Welcome to Clan Fokus – a new series on Warhammer Community where we’ll be taking a closer look at all the new Clan Kulturs in the new Codex: Orks. These powerful special rules let you tailor your play-style and offer huge benefits to nearly every unit in your army. We’ll be previewing a new Clan Kultur every day this week – today, focusing on the Evil Sunz… 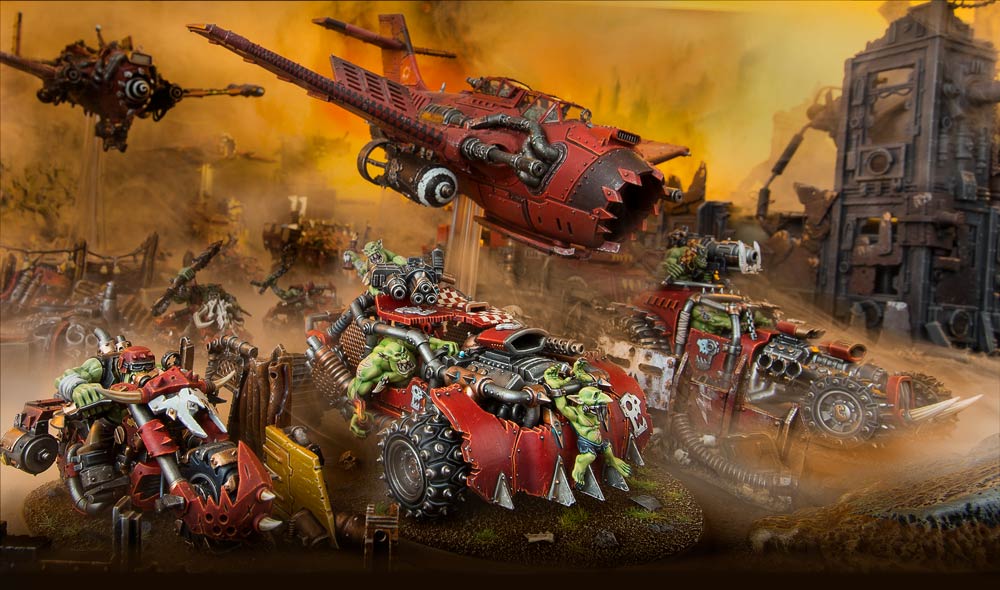 Orks aren’t just obsessed with violence – many also find the very act of going fast a rapturous experience, and none more so than Speed Freeks. Indeed, such Orks will seek to combine their two favourite pastimes of racing at high speed and mindless carnage, forming a great Speedwaaagh!of smoke-belching racing vehicles with which to roar into battle, full throttle. Foremost among these speed-worshipping Orks are the Evil Sunz – firm believers in the old Ork adage that “red ones go fasta” to the extent that they paint all of their vehicles (and sometimes even their ammunition) red!

Evil Sunz Orks are almost universally members of a Kult of Speed – vast gatherings of Speed Freeks who drive, ride or fly into battle. Even the footsloggers of a Kult of Speed will cram their way aboard transport vehicles so that they can embrace the thrill of the wind in their hair squigs as they race to war. The obsession that the Evil Sunz have for speed is at the heart of their Clan Kultur… 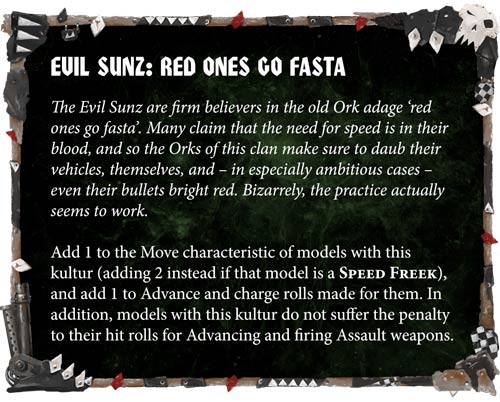 Yep – for the Evil Sunz, the red ones really do go faster! By choosing Evil Sunz for your Clan Kultur, you’ll get an army-wide speed boost (even for your Infantry units!), with a particular turn of speed for your Speed Freeks units – that’s Warbikers, Deffkoptas and buggies such as the Kustom Boosta-blasta and Megatrakk Scrapjet. You’ll also be able to shoot Assault weapons without penalty when you Advance, letting you maintain a semblance of accuracy as you close in on your enemy. 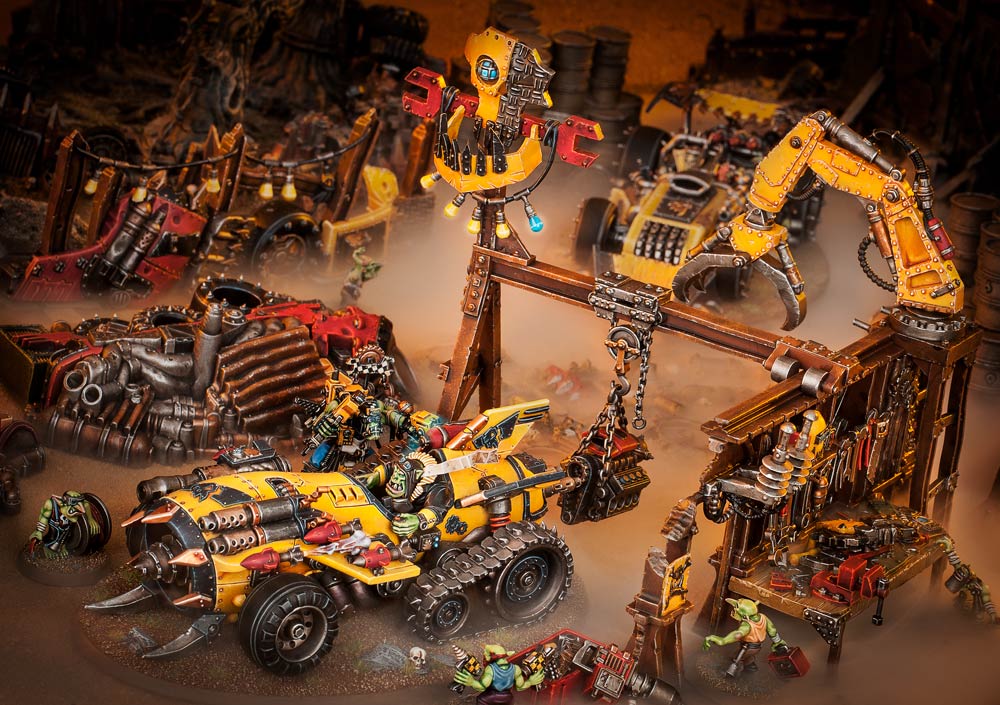 Chances are, if you’re playing Evil Sunz, you’ll have a LOT of vehicles, so a Mekboy Workshop goes a long, long way. This new terrain piece is available to pre-order this weekend and, for a mere handful of points, helps enhance the abilities of the rest of your army considerably. Every turn, each Mek Workshop can give a nearby Ork vehicle a Kustom Job – a powerful enhancement to the ability of said vehicle. As you’d expect, you can repair stuff, but you can also amp up the dakka: 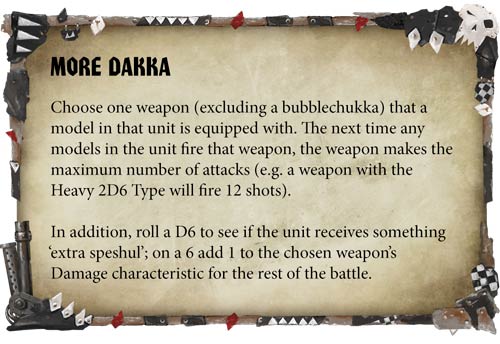 Just imagine combining this with a Stompa for a guaranteed 18 shots with the Deffkannon – and a chance at improving its Damage in the process! The only downside is that a model can’t shoot in the turn it receives a Kustom Job – but even so, you’ll find them absolutely invaluable in a mechanised army. 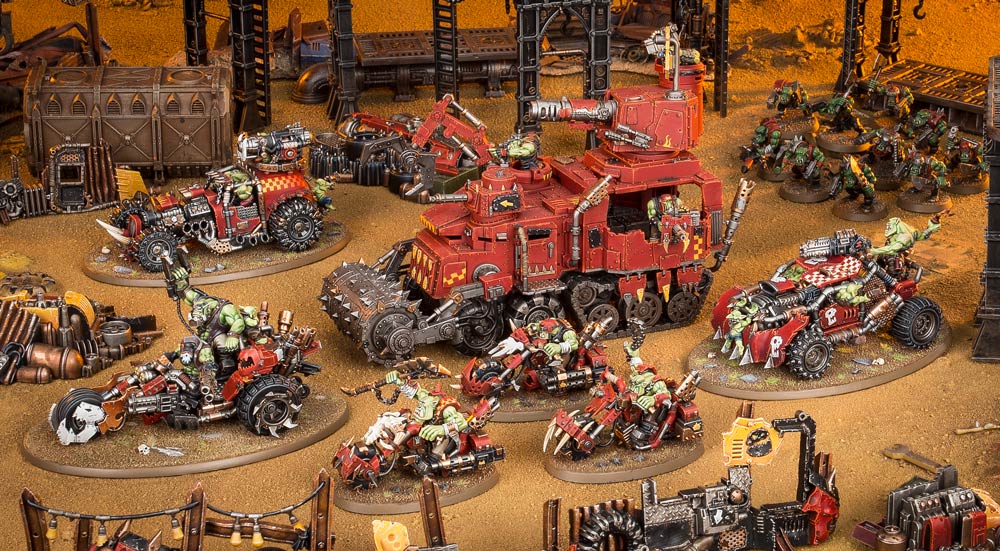 Warbikers, Deffkoptas and the new buggies are all Speed Freeks – a new Ork keyword that applies to the fastest-moving ground (or near-to-ground) units, and which offers a range of powerful new synergies. Consider, for example, the Speedwaagh! ability of the Deffkilla Wartrike when combined with a bonus 2″ Move on all of your Evil Sunz Speed Freek units and their potential to re-roll charge rolls:

A handy Stratagem for your Speed Freeks is Billowing Exhaust Clouds, which makes your chosen unit that little bit harder to hit: 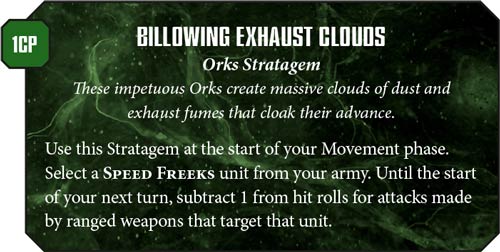 For a mechanised Ork army that’s fast, furious and unstoppable on the move – or for as good an excuse as any to paint everything red – choose Evil Sunz for your Clan Kultur. And if you like the threat posed by a potential mass charge in the first battle round, an Outrider Detachment of Evil Sunz is the perfect answer. We’ve got more previews coming, and soon – check back tomorrow for our preview of the avaricious Deathskulls.

Leave a Reply to kevin lantz