Chuck, head TO of the NOVA Age of Sigmar event and author of the Realm Gate blog brings us a recap of the event!

Hey Everyone!  NOVA Open 2018 just recently wrapped up and after a fantastic few days of gaming and friends, I finally have the time to chat about my experience.  There was a lot of firsts for me this year from running the Age of Sigmar Doubles and Grand Tournament to entering my first piece into the Capital Palette painting competition.  All in all, it was an exciting event full of the usual hobby goodness.  I also learned a lot from running the Age of Sigmar events from player feedback and critiques.  I was happy to have the players tell me what they liked and didn’t like so I can improve the event for next year as it will allow the event to grow and become even better! 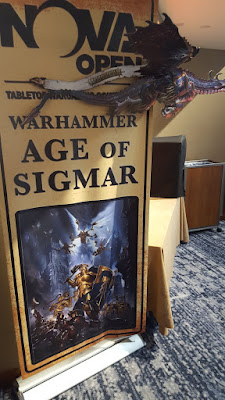 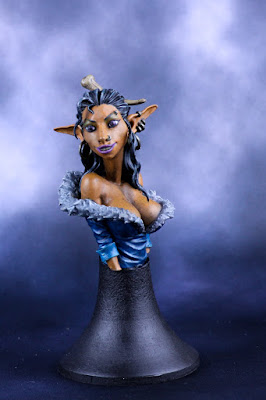 I arrived late Wednesday night for all the fun, but my energy levels remained high as I got to catch up with some good friends I only see a few times a year.  While that night was short I had purposely left Thursday open in order to set up the tables for the Age of Sigmar Events and to simply hang out with everyone and do a bit of shopping at the vendor hall.  I took advantage of this downtime as I knew the following days would see me very busy. 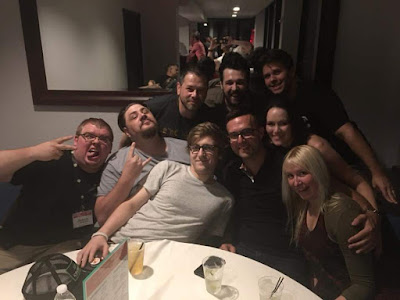 For the events, I used the Best Coast Pairings (BCP) App and it is a fantastic tool I highly encourage everyone to take a look at using for their events.  There were a few interface items I would like to see changed in the future, mainly an easy way for players to view their Paint Score and overall Sportsmanship Score.  The gentleman responsible for the app were receptive to the ideas and are looking to implement them in the future.

The day of the doubles arrived and admittedly I was nervous, but I had little need to be as the event went well.  I built the doubles event to be more about fun than competitive setting the game sin Ulgu and using the Schemes created by Vince and Tom of Warhammer Weekly.  Games ran smooth and players were having a good time rolling dice.  I had to make one tough call due to an unintended error on a list, but after explaining to the players my ruling it was accepted and awards were handed out and everyone headed off for a night of fun.  With the first event over I did the same but made sure I headed to bed early to be ready for the Grand Tournament the following day. 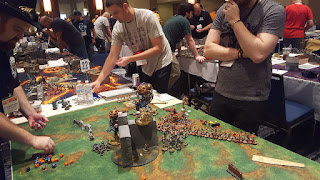 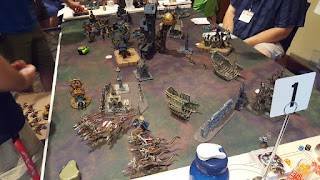 The following day saw the Grand Tournament begin and players came out with some wonderful armies as everyone did their best to paint to my, admittedly, challenging rubric.  I had some tough calls through the event and I learned the most here in what I can streamline for next year and what players wish to see changed for next year.  A lot of it is about the recent debate that popped up online after the event regarding paint and sports scores as part of the final scoring and I am happy players feel comfortable enough to have that dialogue with me.  I am already looking at changes going into next year and I am excited to improve the event based on the player feedback. 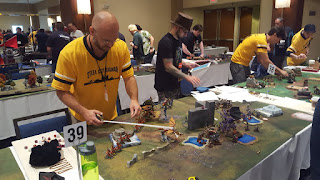 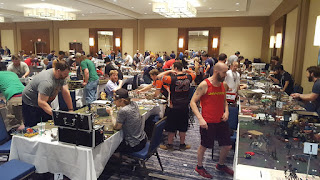 I don’t want to forget to offer my sincerest thanks to everyone who helped me run the two events as well.  There was a fair number of people who reached out to offer help.  The event would not have been a success without all of you who supported and assisted me throughout the weekend.  It is humbling to have so many friends who wanted to support this year and who have offered their help again for next year.  I also wish to offer thanks to the players who came to the event to roll dice, compete, and enjoy a weekend playing our favorite game.  I ran the event I wanted to play in having paint and sportsmanship play a role in everyone’s overall placing.  Every player who showed up put their effort into bringing some great hobby and a good attitude.  My goal is to now work to give you a better time next year based on the feedback.  My promise to you is to take your critiques alongside your compliments and make 2019 the best even it can be as we continue to grow.  An even tighter event pack, readjusted paint rubric, additional award(s) focused Battle Points, and more are all on my list for 2019.

Going into the GT event there was some discussion about submitting scores for ITC.  Some people want it and others choose to not participate across the country.  I see both sides of these arguments and I have a lot of close friends on both sides of the fence.  For NOVA I decided to poll the players from the event itself on the round one score sheets.  I did not believe that I alone should have the final say to make that decision for the players.  Out of the 85 players who played everyone voted and we had 46 -Yes, 6 – No, 33 – No Preference either way.  I believed we would see a lot more in the No Preference category, but the player votes said yes and the scores were submitted.  It was an easy way to see what the players wanted and it is likely I will poll the players every year with this question moving forward. 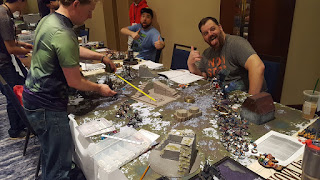 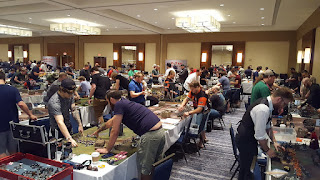 The weekend was a joy with fun times, great people, and plenty of drinks and merriment!  It is hard to think it will be a year until the next NOVA, but I am already excited for it to arrive.  Every list and final placing for both event are up on the Best Coat Pairing App and Website.  If you are curious go check it all out over there and search “NOVA 2018 Age of Sigmar”.  Until next time, Happy Hobbying!

Posted on September 9, 2018 by Reecius in Age of Sigmar, Tournament report