Hey guys, Cavalier checking in, commission painter for Frontline Gaming and co-host of Splintermind: The Dark Eldar Podcast back again with the beginning of a new series of articles I’m calling Eldar Trickery. In this first installment I’ll be looking at how to keep your Harlequin Skyweaver Jetbikes alive, which is massive importance with the rise of the Imperial Knights. 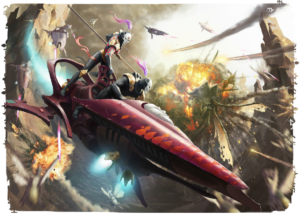 One of the weapons I’ve most looked forward to adding to my Eldar arsenal of weapons are the Skyweaver jetbikes. Not only are they amazing looking, but they are studs on the tabletop. Very good defense, very good combat and one of the nastiest anti-armor weapons across all the Eldar factions in the form of the Haywire cannons. D6 shots causing mortal wounds on a 4+ or D3 mortal wounds on a to-wound roll of 6 is an invaluable tool, especially with the rise of Knights like I mentioned off the hop.

These guys are excellent all-rounders, combining the some of the best elements of Reaver Jetbikes, Shining Spears and Windriders all in one. They represent a vital tool in the Harlequin army as either first turn chargers, or your mech-busters. Most likely your opponent will be well aware of this as well, and will be looking to remove them as quickly as possible. Yet Harlequins have a brilliant array of strategems that when combined can make these bikers “Alaitoc Elusive” and tough as nails.

The stratagems I have slated for these guys is a substantial investment. Maxing out at 4 CP’s for the entire suite of tricks, this approach is most likely not something you will want to employ all game long. Yet in the early goings I would be totally willing to invest the CP’s considering how vital the first 2 turns of the game are towards getting a win.

For this particular article I’m envisioning an all-Haywire loud out for anti-tank duties.

I generally try to prepare for the worst in any given situation. So preparing to go second is a must. To that end The first and most important stratagem to have on tap is of course Lightening Fast Reactions. For 2CP you impart an additional -1 to hit on top of their inherent -1 to hit from Mirage Launchers. Whats important about this however is that the Harlequin version gives you that benefit even in combat! So if somehow your opponent slips your screens (and you should be screening these dudes) you’ll have some decent support if the worst should come to pass.

Yet whether you go first or second, as soon as your start pushing models across the table I’m going to look to Prismatic Blur (1 CP) which after move and advance the unit gains a 3+ Invulnerable save. If you are playing Soaring Spite (the best choice for bikes) you’ll be ignoring the penalty to advancing and shooting so there is no loss there. I would move + advance the unit just enough to get into range of the Baneblade, Knight or even just an offending Leman Russ.

Then if necessary I’d pop Fire and Fade (1 CP) on those guys, hopefully out of LOS from at least one angle of return fire, or at healthier distance than 24″ of whatever you targetted in the shooting phase.

So while this does require a large unit of bikes, in the end I think it offers stratagem efficiency and excellent defense. So after all is said and done your bikes should -2 to hit in shooting, -1 to hit in combat rocking a 3++ and with Fire + Fade you should be safe position, hopefully shielded ou within your deployment zone or elsewhere on the board.

A second unit of bikes similiary equipped but tasked with charging units that could serve as a major threat such as Imperial Guard Tank Commanders, so as to limit return fire is a big consideration also.

Are all of these defenses necessary? Not always but if they are hopefully you’ll have this little combo in the back of your mind. Combine all this defensive strategy with some offensive buffs from an Eldar Farseer casting Doom and in the early turns of the game you should be able to Haywire to death the most important vehicles in your opponents army while, your Fusion toting Troupes finish off the rest.

So I hope you found this article informative, if you have any questions or tips of your own please share down below, I’d love to know your thoughts!

Also if you are interested in exclusive Dark Eldar and all things Aeldari coverage check out our podcast Splintermind the Dark Eldar Podcast which just released our 50th episode.

Well that’s another bit of eldar trickery to think about!

Could they also borrow from the craftworld tool kit and get “protect” cast on them? Why not be -3 to hit with a 2++.

No, Protect only works on Craftworld units, unfortunately for Eldar.

Thanks Alex! I wish it worked that way! But as-is it should be damnably elusive and tough for your opponent.

Veil of Tears and Fog of Dreams both require the target (or target of) to be infantry. Skyweavers are not infantry.

FAKE NEWS! Thanks Reepy. Big time mess up on my part. Appreciate it bud. Would’ve hated to rock up to the table all big and brash and fall flat on my face with those psychic powers. Thanks man 🙂

Curious as to how Doom works with haywire. Are you able to just reroll the 1s, 2s and 3s? Just curious if the mortsl wound on a 4+ to wound counts as wounding or if you have to rely on the base strength of the weapon? Doom could still be great regardless for them though. Sometimes you just don’t roll enough 4s

Doom says you may re roll so you can choose not to reroll stuff that would not wound, but would cause mortals

It’s on failed to-wound rolls, which are independent of the MWs caused by the haywire effect, and I believe Doom words it as “may reroll”. So you *should* reroll only 1s, 2s and 3s — even if the 4s and 5s don’t wound, they still proc the MW, and you don’t want to risk turning that into a complete failed roll on the off chance of rolling a 6. Thinking of T8 targets here.

One thing I would like to point out: Linhtning-fast reflexes only works during the phase where you get targeted by a shooting attack or in hand-to-hand combat. So keeping bikes -1 to git through both shooting and fight phase consistently will cost you 4 CP 🙂

You can also just deep strike em if you’re worried about them being killed on the first turn.

That does have the disadvantage of meaning that they will not get to shoot on the first turn (since they only have a 24″ range), though.

And you wont get to activate Prismatic Blur since you can’t advance, meaning your opponent will be able to put more hurt on your bikes