Goooooooood morning gamers! My name is Keith and I am a co-league organizer for Warhammer 40k and Kill Team at At Ease Games in sunny San Diego, CA!

Reece asked me to talk about how my co-league organizer, Yu Yao, and I bolstered the gaming community in our hometown; a city rife with competitive and friendly gamers alike!  With a few creative organizational elements and dedication to open communication, Yu Yao and I were able to grow the attendance of our leagues by 500% over the course of 7 months, from a meager 12 or so players to a staggering 73 (and still growing)!

It all started back in November when the excitement of 8th edition began to wear thin and At Ease Games struggled with keeping regular 40k players in the league.  The owner approached me (a regular tournament attendee with an ear to the meta) and Yu Yao (our Tournament Organizer), to revitalize the league. Our goal, create and maintain a weekly league that catered to competitive, friendly, and new players while providing an atmosphere in which all players could grow and connect with players that can’t commit to a set night due to work.

I think we could all agree that one of the biggest turn-offs for new players within the hobby is that one bad experience against the local meta chaser.  The kind of guy that brings Renegade Knights, Plagueburst Crawlers, and Terminators to a game (looking at you Don Hooson!)* Meanwhile, we wanted to entice the competitive players into a league that would be worth their time.  So we created a Pod (or Division) system that separates people into groups based upon skill level. With this Pod system, we have those tournament players practicing their lists while newer players can focus on learning the game.  Additionally, we are given an opportunity to move people in accordance with their performance in the previous league. We “promote” the top two players of each pod while dropping down the two lowest scoring players.

Now I bet you’re asking how large these Pods are; only 6 players per pod!  These pods give players a set group of opponents that they can play in any order whenever they can get their game in. All that we ask of our players is that they play against the other 5 players in their pod in 8 weeks.  Yu Yao and I use Google Spreadsheets to track individual scores and share a “view-only” version of the sheet with the players. 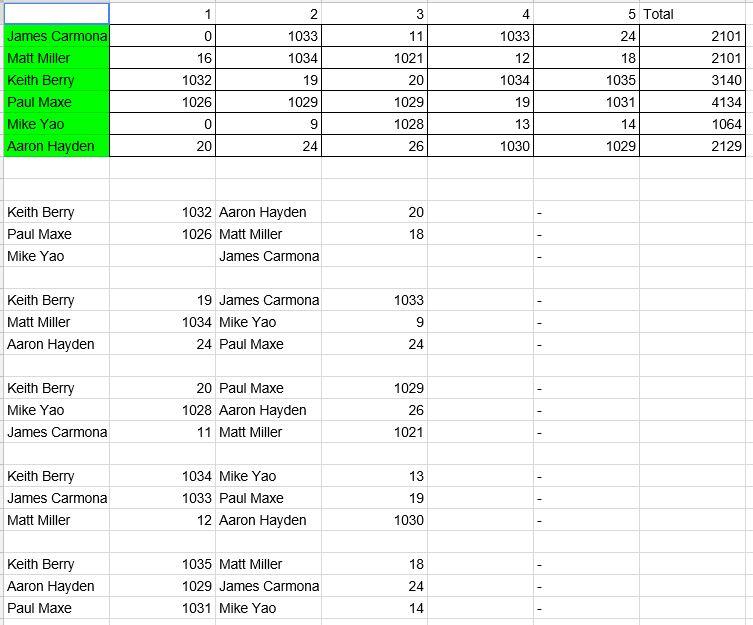 This pod system has provided many growth opportunities within the league and gave us the opportunity to spread out the prize support (the prize pool of 73 players is quite large!).  Yu Yao and I felt that giving that much money to the top three earning players of the league would create a cut-throat atmosphere and “kill” any fun to be had. Instead, we give store credit to the top two players of each pod and we have raffles for players who completed their games.  Of course, we stratify the prize support for the pods and there is more to be won the higher you go.

Now it wouldn’t be fair to attribute all of our successes to our organizational skills.  I must confess that WE PLAY AT A BEER TASTING ROOM!!!

The owner of At Ease Games partnered up with Barrel Harbor to create a space in which gamers could drink and play their games!

And we have a food truck stop by every Tuesday!!!

The last bit of advice I have for the young League Organizers out there is that you must be prepared to advertise the league.  I like to think of my league as a product that I am trying to sell and I advertise the living bejeesus out of it. I will usually spend about a month blasting the three other generic San Diego 40k Facebook pages to try and get more players.  Then always be on the lookout for new faces that look lost in your store. Approach them with a smile and have a friendly discussion about what you have to offer!

*Don Hooson doesn’t play at my store, I’m just using his current status as 2018 BAO Champion to rag on him.

I wanted to give a big thank you to Yu Yao and Keith for running this very fun league!

I thought I broke metas, not chased them. Lol

I would love more detail on this structure since I would like to implement something similar in my area. Do the players participating in the league locked into there lists for there 5 games they have to play or do they get to change it from game to game?

Hello there! I’m the organizer of this league.

It goes against our open and inviting atmosphere to lock people into a so gular list for the course of the league (5 games in 8 months). We want our players to feel free to try new combos as they present themselves, especially when new material comes out every month! However, we have been providing an exception for the top pod to create a slightly more challenging environment; the primary faction (using ITCs definition) is locked for the league. You can switch up the units in that detachment, but if you start the league with Drukhari as your largest detachment, it must remain so for the rest of the league!

How do you prevent people from list tailoring if they are able to change lists.

The top pod has their faction locked in, but beyond asking other players what their future opponent runs there is very little way of knowing what your opponent will bring.

List Tailoring isn’t a significant problem in my meta outside of the top pods, so we have no system in place to prevent tailoring. If it’s an expected problem for you, you can lock players into a primary detachment for your league.

We don’t have a significant list-tailoring problem in our meta outside of the most competitive players, so I don’t have anything in place. If you think you will have a problem, you could lock the primary detachment in your league.

Man, I would say Don is about the furthest thing from a meta chaser out there. I know he’s inspired me to have a look at running different stuff from the meta norm.

Pretty cool thing you’ve got going on there though.

This will be helpful. Thanks.

I am a local newb trying to get started in the hobby through kill team. And drag my brother along with me. I unapologetically do not space book soo.. when do the KT signups begin At Ease?
I stopped in last week and asked about KT18 league and the counter guy said he had heard something but didn’t know and to check back. I am honestly afraid that I am an 40k Ork
player.. green tide for the shucks of it!

Hi Steve! If you’re a San Diego local, i highly recommend finding our Facebook page at At Ease Games Warhammer 40k for more information! The next league starts next month, but nothing is stopping you from scheduling a game against one of our players before then.