Rock you like a Hurricane: Storm Of Silence 2018 Coverage

You are here: Home › 40K › Tournament report › Rock you like a Hurricane: Storm Of Silence 2018 Coverage

Hey guys Mitch Pelham here again, this time covering one of the Premier events for the Pacific Northwest; The Storm Of Silence 2018 at The Gamer’s Haven in Spokane Wa.

The more competitive half of a pair of annual tournaments (The other being the Harvester of Souls in the fall) put on by shop owner Bob Kelley and all around nice guy Dan Winters. These 2 events sell out months in advance and have waiting lists of dozens of people. But enough background, onto how the event went this year as well as a look at the new meta that is emerging post the Big FAQ and this being the first Major with the new rules. Announcements, pairings and Bob also giving out $30 gift cards to everyone who had been to all 6 Storm of Silence tournaments. There was an additional 15 minutes are added to the round for everyone to inspect their opponents list for any errors so they can be caught and corrected without people having to drop out or feel bad for being 2 points over. This is a great idea and something I would love to see at every event. There is a bit of a mix-up in BCP as it pairs several people from the same teams together but it is quickly remedied.

Now is probably a good time to go over the armies that were at the event. The Faction Breakdown was as follows A bit of a interesting breakdown here, Tyranids are back in a big way and as we will see when we get onto results. Also looking looking at the three newest Dexes we see a big disparity between Tau and Necrons and Drukhari. With almost every Aeldari army featuring at least one Dark Eldar detachment and Necrons showing up in force and every flavor including the infamous Deciever +3 Tesseract Vaults  to Bike heavy or Destroyer Heavy lists, they were out in force. We saw a comparatively few Tau players, there could be several reasons for this, the general consensus was their dex was a little under-powered on release but they got some big buffs from the Big FAQ. I think there’s a lot of potential there and once Tau players are able to get the correct models for the more efficient lists.

At the end of Day 1 we saw last year’s Storm winner Matt Evans at the top of the leader board with his Tyranids and a Mix of Aeldari, Chaos, Nids and even Cult Mechanicus and Custodes all 3-0 and in the hunt.  With the day over everyone headed over to the Black Pearl Casino and Grill in the same parking lot for good food and great company, something Bob, Dan and crew have done incredibly well is emphasize the social side of the hobby and really make sure everyone is having a great time. This creates an atmosphere that encourages good sportsmanship and camaraderie among players.

Day 2 after round 4 we see our final match-up to decide it all Matt Evans ‘Nids vs John-Paul A.K.A. “JP” Mawets blend of Eldar and Dark Eldar. In a very tight game that could have easily ended in a Draw, JP squeaks out a 29 to 25 victory. I got to watch the last couple of rounds of this game and it could have easily gone either way with top tier play from both opponents, exactly what you want to see at a top table.

Which brings us to the final placings Theres a lot to unpack here and I could easily write another article analyzing all of this  however there are a couple of things I do want to highlight. The first is the faction diversity: sure there are the expected armies with Tyranids and Eldar but we also see Custodes and Ad Mech right up there! Its great to see less popular factions being played and played well at that. Next up I found it interesting that neither Tau nor Necrons broke the top 10, even the Triple Tesseract Vault list went 3-2, it just goes to show that the “Gimmick” lists out there while scary, can be beaten. Lastly the conclusion I walked away with most of all is that Dark Eldar are for real and can absolutely stand on their own, my only loss came against a well piloted, brutal pure Drukhari list that was relentless.

With that, the Awards Ceremony  was all that’s left, I feel I should hit on one of the biggest appeals to the Storm and Harvester as tournaments: the prizes. Bob is incredibly generous and after taking out the expenses for trophies, custom “best in faction” pins and a few other expenses he ended up with a prize pool of $3000 in store credit. This combined with a emphasis on every part of the hobby allows for players to compete in multiple ways. The prize pool was as follows

(from left to right) This was a fantastic event as always and the only thing that could make it better would be more space so even more people could enjoy it. I was also able to sit down with Bob and do a interview on Saturday talking about putting on an event like this and the challenges facing store owners in the modern retail environment so you can expect an article on diving into that in the coming weeks. As always thanks for reading and I hope it was worth your time! 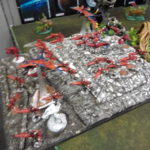 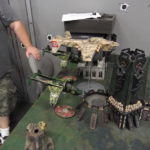 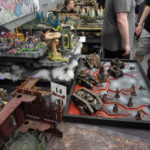 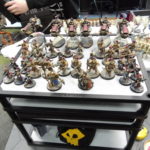 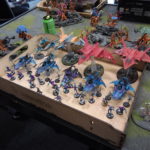 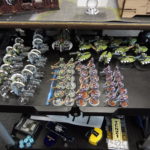 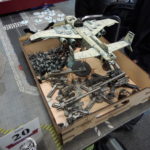 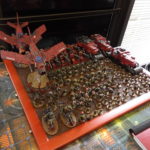 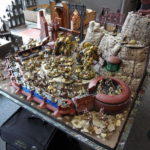 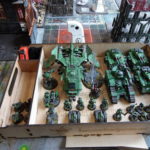 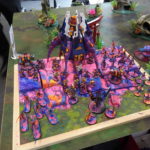 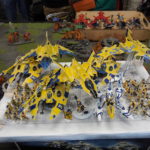 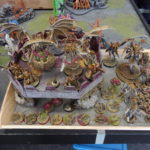 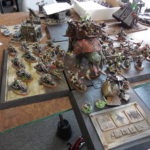 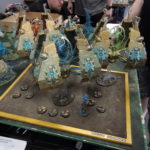 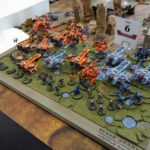 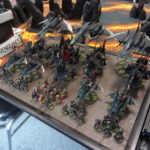 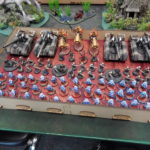 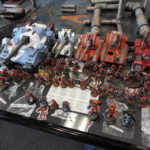 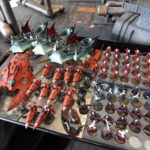 View all posts by Mitch Pelham →

6 Responses to “Rock you like a Hurricane: Storm Of Silence 2018 Coverage”