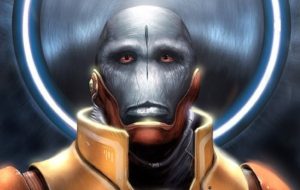 Last week, we spent some time with the elderly (and slightly dementia-ridden) inhabitants of our fictional future. Today we will be going to the 40k nursery and learn about the young, upstart race that is looking to take their turn in attempted mastery of a hostile galaxy. That’s right, we are talking about Reece’s favorite faction ever – The T’au! 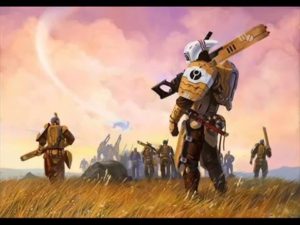 The primitive T’au were once scouted by a Mechanicus task force sometime in the last few millennia. The T’au homeworld was fit for habitation, and the native life there was primitive and recorded as a minor problem for settlement. It was, at least at the time, unremarkable in almost every way – just another habitable world added to the data-pile of mankind’s depthless bureaucracy.  Had they known what those primitive animals on the surface were capable of, they may have moved a bit faster to do something about it.

The T’au themselves formed their societies quickly and split off to separate distinct cultures on their world. The hunter caste lived off of the herds of wildlife that roamed around its large plains, while the messenger caste capable of limited flight lived among the peaks and mountains. The more technologically advanced built cities with walls and formed tight-knit communities, while others more skilled in trading and mercantilism fostered relationships with the other castes. These castes each had complimentary skill sets that would have been formidable if unified, but they were anything but friendly with one another. Wars were constant between the different peoples, and only accelerated as their technological advancements continued to progress. They would all have died at each other’s throats if not for the timely intervention of a fifth caste, their arrival heralded by lights in the sky. 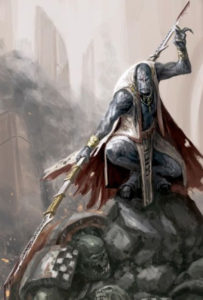 The Coming of the Ethereals

At the height of the wars between the different T’au castes, the Ethereals came. Speaking with a calmness and authority that defied what should have been possible, representatives of the Ethereal caste were able to bring the warring tribes together almost overnight in unity. Organized into specific roles, The Fire Caste (warriors), the Earth Caste (scientists), the Air Caste (pilots and navigators), and the Water caste (diplomats and traders), and the new Ethereal caste (leaders) combined their efforts into bringing prosperity through unity. This philosophy, called “The Greater Good” was the new secular ideal, the individuals setting aside their own desires abd beliefs for the betterment of all. 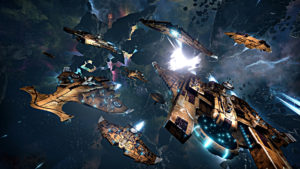 Now, with all their differences set aside, the T’au race turned its potential towards the future. That future did not end with their own world, for nothing but unity throughout the stars would satisfy the Ethereal’s dreams. It did not take long for the T’au to advance into a space-faring race. Armed with determination and absolute faith in the Ethereals and the Greater Good, they set out among the stars with an expansion fleet (the first of many) to colonize new worlds and bring other races into their enlightenment. 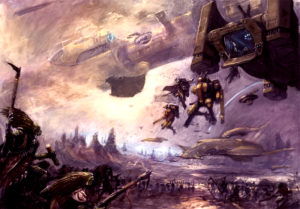 Their debut onto the galactic scene met with mixed results. While some races embraced the T’au philosophy, some more more resistance. The Water Caste diplomats worked tirelessly using any diplomatic means at their disposal to get new races to join their cause and pledge loyalty to the Greater Good. Many would accept their offer and unite with the T’au through diplomacy, while some others (such as the Kroot) did it out of gratitude – having been saved from annihilation by timely intervention of the T’au military. It did not take long for the T’au to come across other races dominant in the galaxy, and one in particular that would test their diplomatic philosophy…

I speak, of course, of the Orks. All attempts at diplomacy with the Orks failed, and it was only after several failed attempts to avert war and bring them into the fold that the Ethereals admitted not that every race in the galaxy could be saved; some had to be destroyed. The Orks would be an ever-present thorn in the side of the T’au expansions, but the Orks would not be Orks otherwise. Truthfully, the two races could hardly be more diametrically opposed. The Orks crude technology and love of close quarters combat and hand-to-hand fighting went completely contrary to the T’au military philosophy of quality coordinated firepower at range. 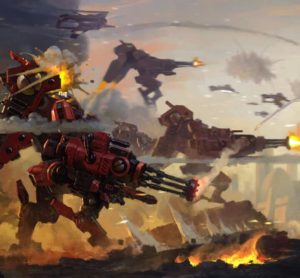 The T’au were initially optimistic when coming into contact with the remote human worlds on the edge of Imperial space, but were met with disappointment upon learning more about the now dwindling human empire. Where they had hoped to find great technology and sophistication, they were met with superstition, xenophobia, and barely-understood technology. While initially the individual worlds of the Imperium were easy to bribe into joining with them, and conflict was slow in the coming with the myriad horrors of the galaxy constantly pulling military resources to more at-risk warzones. When the Imperium did notice this upstart race leeching its worlds, its wrath was brutal. 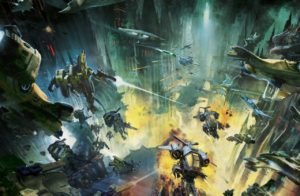 The hammer that fell on the turncoats and their T’au masters sent them reeling back across the dead space known as the Damocles gulf that separated the two empires. It didn’t stop there, pushing into the T’au worlds until brought to a grinding halt in the face of the technologically superior T’au, and the demands of other wars. A ceasefire was eventually established, with even the Ultramarines acknowledging the worthiness of this particular foe. The T’au would not be satisfied to leave humanity alone, and they were determined to continue their expansion throughout the galaxy. They prepared and launched more spheres of expansion, sending attacks into Imperial space, seeking to capitalize on their foes’ inability to bring it’s full wrath to bear. 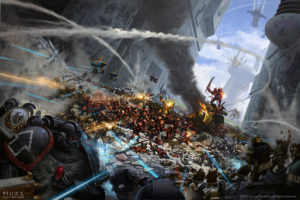 A Galaxy of Horrors

The T’au were able to expand quickly and through their superior technology push their enemies back, but they were only stepping foot into a wider understanding of the horrors of the galaxy. Their once-champion Commander Farsight forsook his ties to the T’au Empire after a mysterious war that saw all the Ethereals in his entourage killed. With the opening of the Cicatrix Maledictum, whole expansion fleets have been lost into the warp – a realm the T’au cannot begin to Fathom (being a race of no psykers). Encounters with Demons and other anomalies defy categorization and description, and challenge their philosophy at every turn. 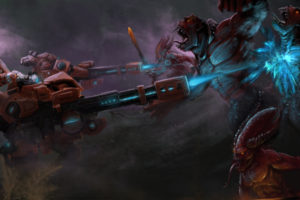 Even still, the Tyranids also threaten their empire at home, becoming yet another foe that will see no reason and will never acquiesce to the Greater Good. The warriors of the Fire Caste have their work cut out for them, because despite their technology and unity, they are only a small pinprick in a galaxy full of monsters. 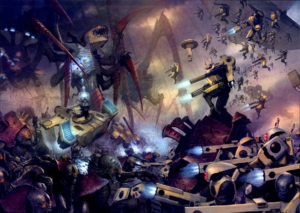 Only time will tell if this new race will last into the ages to come, or become a bright star quickly burnt out.

I haven’t read a whole lot of T’au fiction, but I found a couple of books for those interested. 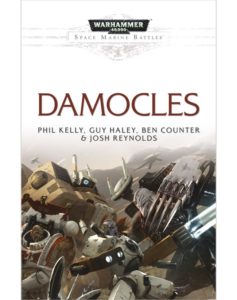 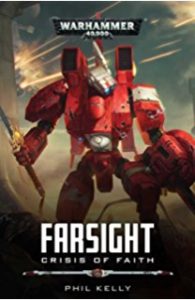 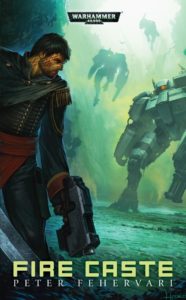 If you have read some T’au books, feel free to let us know your favorites in the comments! I’ll be getting around to all of them eventually. If you’re a T’au fan, what got you interested in the faction? What misgivings do you have about the idealistic Greater Good, and what are your theories about the mysterious Ethereals? Let us know in the comments below!

Another great article, Chris! I enjoy seeing the T’au lore being expanded upon as it was a bit flat initially. The last Codex really gave us a ton of new and exciting information.