GW Grognard: It only took 15 years

Hey everyone! Adam, from TFG Radio, here to fill the void in your heart with words of a grumbling nature!

For those that don’t know, my main army is Chaos Space Marines.  In particular, I play Black Legion. I have played Black Legion since I first read about them in the Rogue Trader book, Slaves to Darkness. The fact that they painted their armor black in regards to their shame during the Horus Heresy really appealed to me. It has since been retconned, but, due to the recent books about Abaddon and the Black Legion by Aaron Dembski-Bowden, I have a renewed love for the former sixteenth legion. As such, it really gladdens my chaos heart that Games Workshop has finally corrected a mistake they made almost 15 years ago. Chaos’ victory at Cadia! 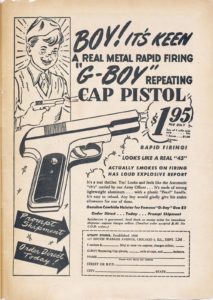 I’m sure every child on Cadia got one at birth.

“I was just a kid. So what happened 15 years ago”, you ask? Well let me tell you. Back in 2003 Games Workshop had decided to run an online campaign. It was set at Cadia and the surrounding systems near the Eye of Terror. It was call, surprisingly, the Eye of Terror campaign and was promoted as Abaddon’s 13th Black Crusade. It gave new army lists, like the Space Wolves Wulfen, the Lost and the Damned(Renegades), and the Ulthwe Black Guardians. More importantly, the campaign was to actually affect the storyline of 40K! 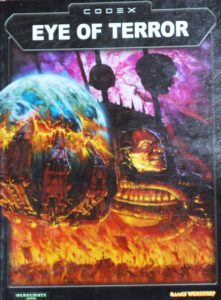 I still have this book

I was very excited. The GW forums, yes they had forums at the time, were a buzz with players starting to organize and get their armies ready for the conflict. They had special cards that, if used, would affect the campaign. They even gave out cards to event winners during the campaign. If someone had gotten a card it was hoped that they were on your side and either use it or not depending on what was needed.

Now, having both Imperial and Chaos armies at the time, I actually played for both sides but preferred Chaos. As the campaign progressed something pivotal happened. The Chaos forces were much better organized than the Imperial side. As a result, they were able to figure out the way the system worked and was able to leverage that by having us attack certain planest and systems to get the best effect of our battle in the campaign. The Imperials, on the other hand were very divided and did not seem to come together as well as Chaos did, so were always playing catch up. 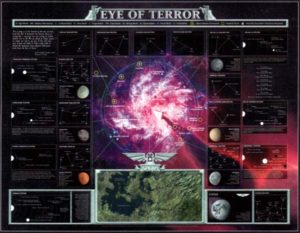 All this belonged to Chaos!

The result of all this was a solid victory for the forces of Chaos. The Ruinous Powers controlled most of the systems that mattered ( I mean the Tau greatly expanded their control of nearby space but even back then no one cared about the Tau). However, it seemed like GW did not really care for the results and declared it a draw. They actually said that, although Chaos controlled the planets, the Imperial Navy controlled the space ways, so they were able to limit Chaos. I still don’t get how controlling space would stop beings that just needed a chaos gate, rogue psyker, or mass killings to get where they needed to be. So in the end nothing changed. This would actually be a recurring theme in a lot of GW’s later online campaigns. 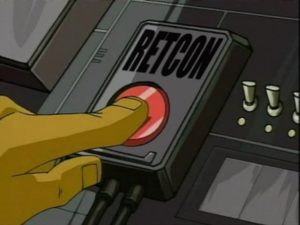 How many times will GW push the button?

They even started to roll things back. Bringing heroes back from the dead, (I’m looking at you, Eldrad), and just rolling back the setting to just after the Betrayal at Tyrok Fields on Cadia. When it first happened, I’m not going to lie, I was upset. The Chaos players spent a lot of time and effort to win that campaign and not only were we robbed of our victory, but it was then made so it never happened. I would  mention this injustice whenever the campaign was brought up or talk about the Black Crusades in general.

Fast forward almost 15 years and GW has finally decided to give Chaos the victory they earned so long ago. I warmed the cockles of my corrupted heart when I heard the title was “Fall of Cadia” and that it was to be destroyed. My joy increased as I read the story and finally got to read the destruction to the enemy that should have happened so long ago. Just typing it out now brings a smile to my lips. Thanks, GW, better late then never! 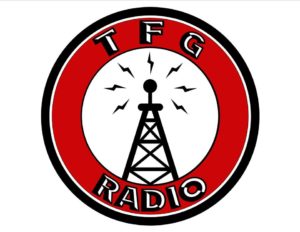 That’s all for this week, I hope you enjoyed the read. If you did happen to take part in the campaign, be sure to leave your experience in the comments section, or try to make an excuse as to why the Imperium didn’t lose at all. Don’t forget to visit our Facebook, Twitch, and Patreon pages to stay up to date on what we’re up to and when episodes drop!

That was a juicy campaign book.

The sting and paranoia of that campaign was still evident during the Konor campaign. I’m pretty sure at least one planet had a massive control swing at the last second.

That really was quite the disappointment. I was curious about how they were going to play the fallout from it, and then they just. Didn’t.

It was a cool supplement, tho. I have my copy around somewhere as well. I still miss the Lost & the Damned list. And the Mutant Conversion pack they came out with that was something like 1 Ork sprue, 1 Catachan sprue, 1 Marauder sprue, (maybe a Zombie sprue?), and a Mutation sprue for like US$20. Even at the time, that was a great deal.