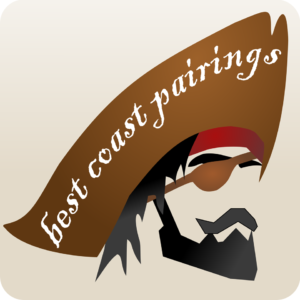 If you’re following this series of articles I have been writing then you might have noticed I missed last week’s installment. I lead a trip to D.C. each year for my 8th-grade students and last week saw me off doing that and not able to complete an article. In that extra week’s time there were some very interesting developments in the ITC standings! Firstly the ITC and Best Coast Pairings introduced the Hobby Track! You can now see tracking within the ITC of player’s Hobby scores from various events, this is a very cool new tool for seeing what is going on in the competitive side of the Hobby that takes place outside the table top and with a paintbrush instead of dice. 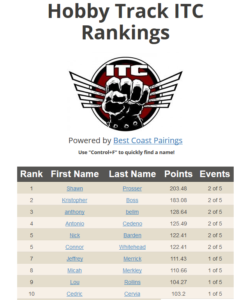 Currently in the lead of the ITC Hobby Track is a name familiar to those of you who read this article each week, Shawn Prosser. The top 3 is rounded out with two other names from previous articles, Kristopher Boss and Anthony Bellm. These three individuals are not only tearing it up on the table top this season but at home at the hobby desk too! This is a very fun part of our hobby and it is an exciting development within the ITC as a tracked ranking. I can’t wait to see how this evolves throughout the 2018 ITC season. 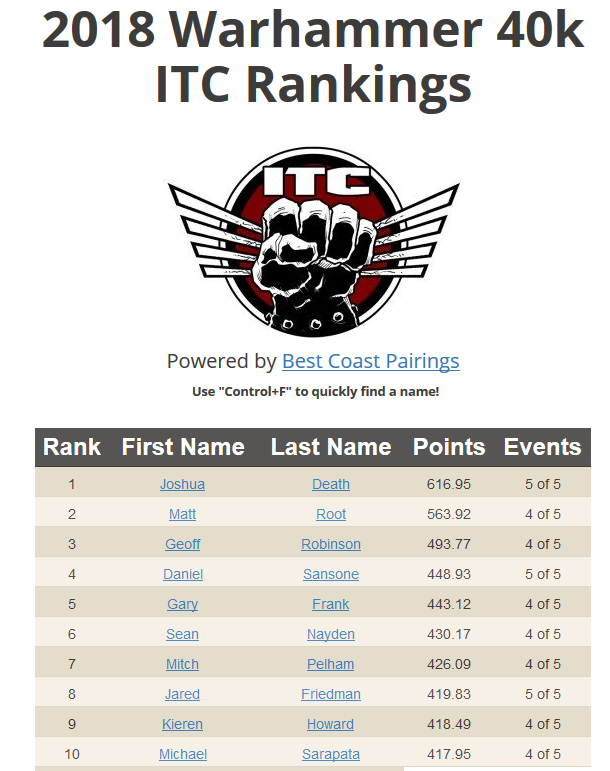 At first glance, the overall ITC standings may outlook too different to you. With many familiar names from several other week’s articles. The difference is that this week sees 4 new names and a few position changes overall. Geoff “iNcontrol” Robinson has rocketed to the 3rd overall spot this week. Jared Friedman, Kieren Howard, and Michael Sarapata are all new additions to the ITC overall ranking this week coming in 7th through 10th respectively. It is no small achievement to crack into the top 10 in the ITC now that we’re a few months into the season. With none of the top 10 having less than 4 events logged and no less than 417 points each, that means every member of the top 10 has had strong showings in their events so far. 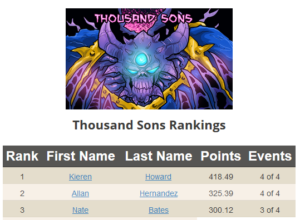 Besides cracking into the top 10 Kieren Howard has also taken the top spot in the Thousand Sons Rankings from previous top placeholder Allan Hernandez. With 418.49 points he is now in a somewhat commanding lead for that faction with Allan sitting nearly 100 points behind at 325.39 points. Kieren has some impressive finished in his 4 scores so far this season including a first-place finish at a GT. If he can keep up these performances we could see him sitting at the top of the 1k son’s pile come LVO 2019. 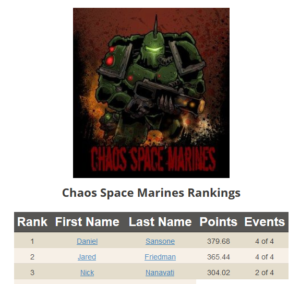 Jared Friedman is a name that’s popped up in this article a few times so far, and it’s no surprise given his dominating performances with Chaos Space Marines so far this season. Jared, and fellow top 10 player Daniel Sansone are slugging it out to see who can sit on the top spot in the CSM faction with Daniel currently holding the edge over Jared by a mere 14.24 points! Jared has put together an impressive showing of results so far and I will be following this faction closely to see is either Daniel or Jared can hold of Nick Nanavati and his brown magic… 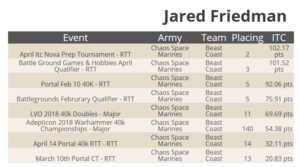 Sean Nayden is a household name, if you only count households with more than 1 competitive 40k player, he’s a very well known and well-liked member of the Competitive 40k community. He is currently sitting in 6th place overall and his spread of armies he has used so far is pretty impressive. Aeldari, Haemonculus Coven, Drukhari, and Ynnari; 4 separate armies with 4 separate but equally impressive finishes so far. Sean is always a player to watch in the ITC, or any event he is playing in, Sean is one of those players who would be considered a safe bet to win any event he’s entered. I look forward to seeing if Sean solidifies his army and list as the season progresses or if he continues this trend of hopping around within the general theme of space elves. 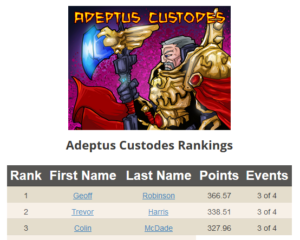 Geoff Robinson is another name you here often in the 40k competitive community. He has been having great success with his Custodes lists thus far this season and 3 of his 4 logged ITC scores this season are from events where he used his Custodes, the exception being an event where he ran his Tyranids. Geoff is a calculating player, a thinker, and strategist, a lot of that probably comes from his background as a competitive Starcraft player. I think the Custodes are a great fit for Geoff’s play style, and his personality, so far this season that definitely seems to be the case.

Recently Geoff took first place at the Annihilation GT, a 5 round event, going 5-0 and edging out Sean Morgan who came in second with a 5-0 record as well! Quite a good showing with a solid list. 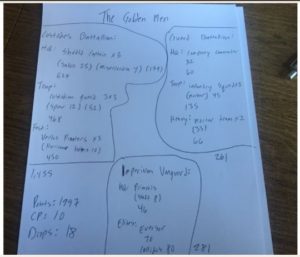 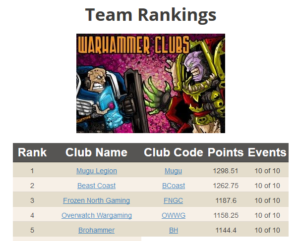 The Team Rankings are no exception to the shake-up since the last time we covered them. All but one of the teams is a very well known team from last season, and all of the teams have been teams that are familiar to you if you’ve been following the top 20 teams this season. Mugu Legion taking the top spot this week with Beast Coast only 35.76 points behind them! If the Team Rankings turn out to be anything like last year then this is going to be a fun top 10 to watch as the season progresses. Last year the top 3 shifted all way down to the very end of the season with LVO being the deciding factor in which team took 3rd place. The team rankings are one of my favorite parts of the ITC rankings to watch develop as the season goes on down the tracks toward LVO 2019.

Very impressive to see Sean Nayden doing so well with such a variety of armies. That is not easy to do.

Also, John, we should reach out to the top hobby guys and see if we can get pictures of their armies for the article! That would be really fun.

Good idea, I’ll do that for next week.

Be cool to see these awesome armies, I just hope they can take some decent pictures. I will send you a link to send to them about how to photograph minis.

Yes it is, I wanted to make sure I called that out!

Any chance you can give an explanation of how faction scoring work? there is an article on the flg website but it seems outdated as currently for faction you have an x of 4 ranking, individual player being x of 5. The article seems to suggest that x of 5 is relevant for both.

If I play in 5 GTs / Majors will I get 4 of those for my faction score (Assuming i stay the same faction) and all 5 will go to my individual player score?

Thank you in advance, loving these articles!

I actually don’t know how that works. I write the articles but I don’t have anything to do with how the scoring works. Maybe Reece can answer that.

It’s all on the ITC home page, just scroll down: https://www.frontlinegaming.org/community/frontline-gamings-independent-tournament-circuit/