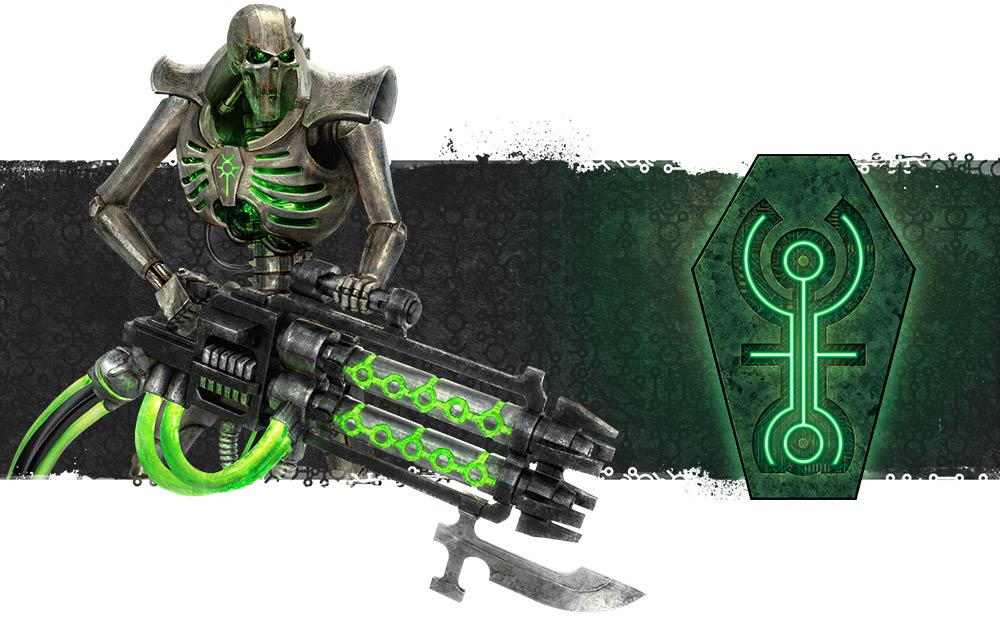 Codex: Necrons is designed to give you unprecedented choice and flexibility when constructing your army.

These articles were originally published on the Warhammer-community site. Check them out for more great content!

Like previous codexes, you’ll be able to customise your army by dedicating them to a well-known sub-faction – in this case, a dynasty. Each dynasty has a corresponding Dynastic Code – a set of rules that’ll allow for a huge range of potential armies. This week, we’ll be previewing each Dynastic Code, as well as taking a look at some of the most improved units in the new codex. You may remember the Sautekh Dynastic Code, Relentless Advance, from last week’s sneak peek.

Sautekh Dynasty Necrons have something that the army has traditionally lacked – mobility! By allowing your units to Advance and shoot, your opponents will find it much more difficult to stay out of range of your deadliest weapons, allowing you to take ground with your Necron Warriors and Immortals while maintaining a steady hail of fire. 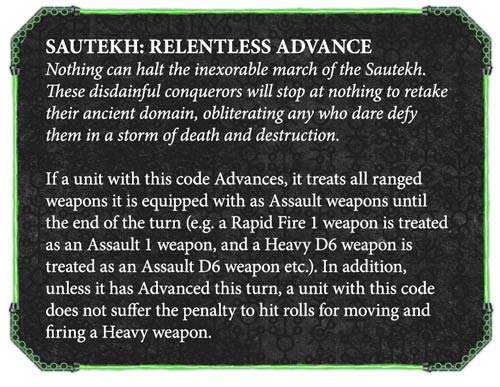 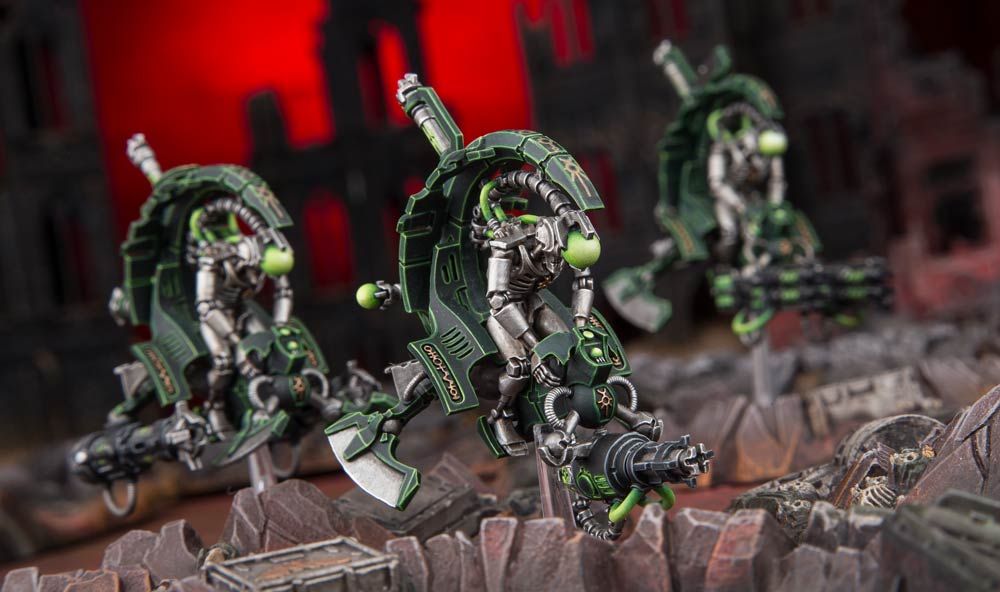 Equipped with a variety of Assault or Rapid Fire Weapons, Tomb Blades are particularly good candidates for Relentless Advance, adding D6″ to their already impressive movement of 14″. Where Tomb Blades really shine, however, is their new Evasion Engrams rule:

With Toughness 5, 2 Wounds and a respectable 4+ Save, Tomb Blades are already pretty durable, and this makes them even harder to put down. And the best bit? They’ve gone down in points, too. Of course, to fully capitalise on Tomb Blades, you’ll want to keep a Character who can keep up with them… and we can think of the perfect candidate. 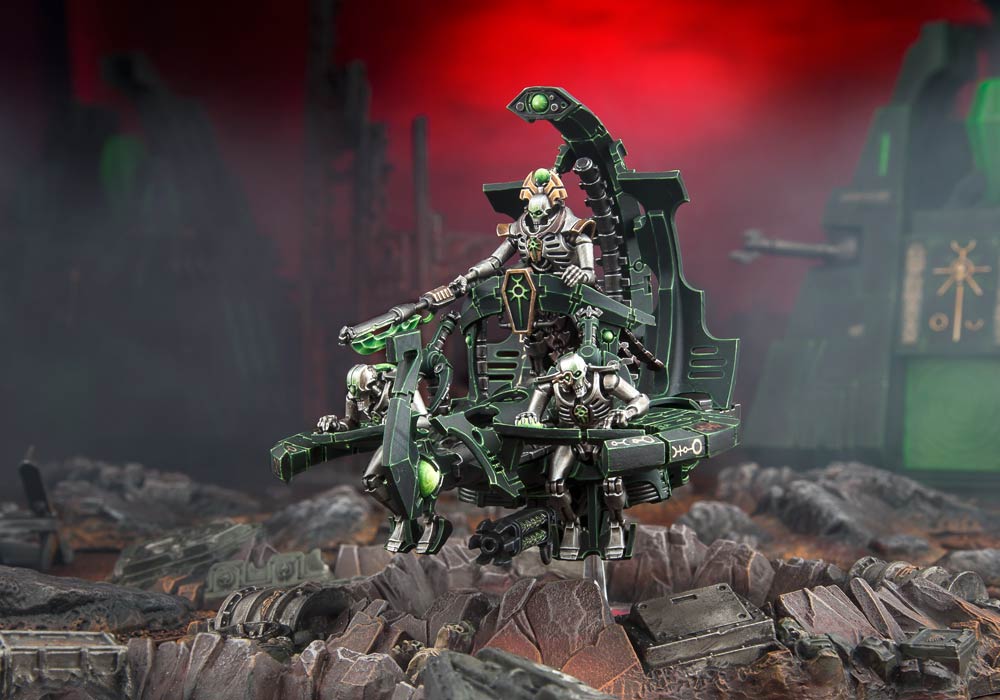 Codex: Necrons contains a host of rules for customising your Characters and constructing your ideal nemesor. With a vast host of Artefacts of the Aeons and Warlord Traits to choose from, your Overlord could be anything from a backline commander to a brutal offensive unit in his own right. Sautekh Warlords are great if you’re looking to make maximum use of the new Stratagems in the book thanks to Hyperlogical Strategist. 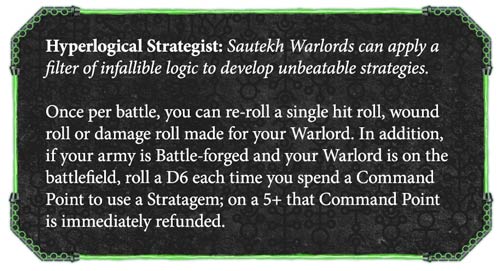 But which Warlord to pick? Our eyes are on the Catacomb Command Barge – it’s durable, it’s incredibly well armed and you’ll be able to lay down a considerable hail of fire on the move with your gauss cannon and staff of light thanks to the Sautekh Dynastic Code.

Your opponent will, naturally, want to take down your Warlord as quickly as possible, but even death is not the end for the Necron characters! For a mere command point, you’ll have a chance to escape death and heal up with Resurrection Protocols. 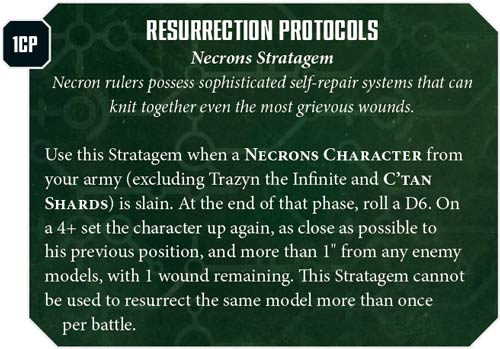 In short, Sautekh armies are flexible, surprisingly mobile and well-placed to take advantage of the host of new rules in Codex: Necrons. They’re far from the only dynasty in the book, however. Come back tomorrow, when we’ll be taking a closer look at the merciless Mephrit Dynasty, and some changes to Destroyers that’ll make them even deadlier… 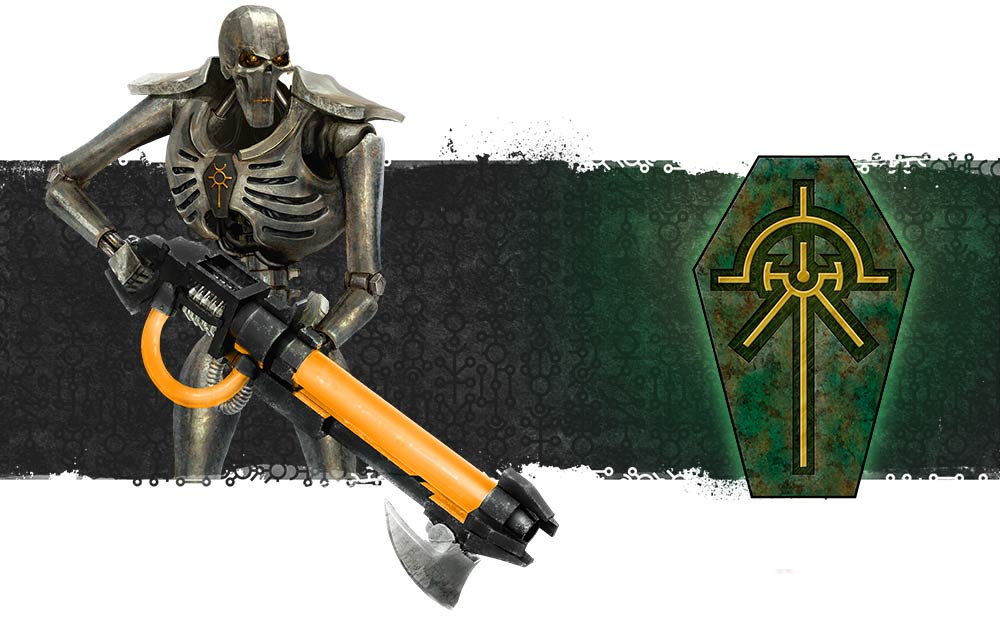 The new Codex: Necrons broadens the tactical options available to Necrons players while capitalising on the existing strengths of the army.

While the Necrons are notoriously durable thanks to excellent saves, Toughness and, of course, Reanimation Protocols, they’re also superb on the offensive thanks to the high AP characteristic of gauss weaponry.

One Necron dynasty, however, is particularly lethal against armoured foes: Mephrit. 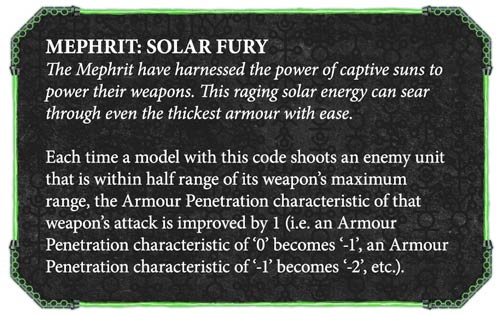 Solar Fury makes the Necron army absolutely devastating to face at short range. From helping your heavier weapons to tear through even the very best armour saves to allowing your tesla weapons to shred massed infantry at close range, this is quite possibly the most potent offensive Dynastic Code available to the Necrons.

While there are few units in your army that won’t benefit from this Dynastic Code, we can think of one choice that’ll find it particularly useful… 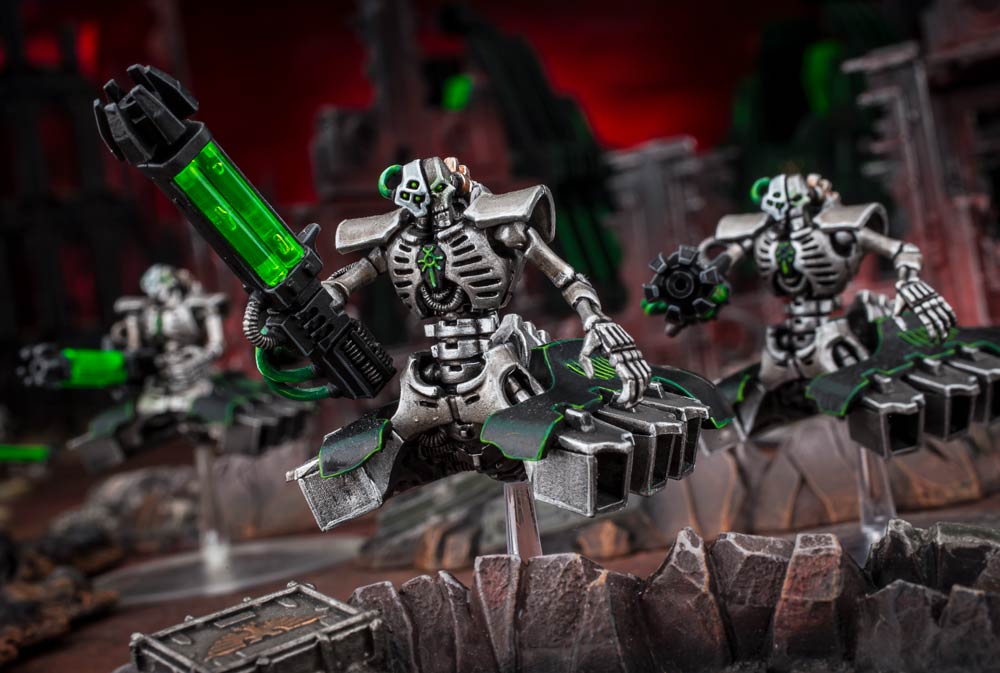 Destroyers are perhaps the most sinister of the Necrons, infused with an insatiable urge to erase all sentient life, and bereft of any emotion save a cold, simmering fury. Destroyers have been significantly improved in Codex: Necrons, their gauss cannons gifted an additional shot and an extra point of Strength, not to mention having their points slashed!

At short range, Mephrit Destroyers will go through even Terminators with ease – but that’s not all. Destroyers from any dynasty can now utilise one of the most brutally effective Stratagems in the game: 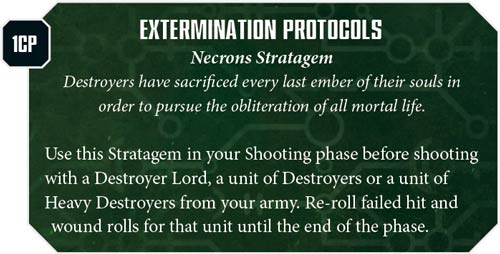 What if your enemy is hiding in cover? That’s easily dealt with too: 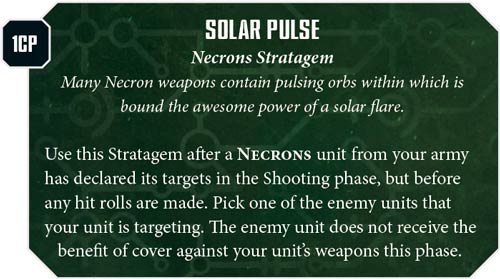 In short, Mephrit Dynasty Necrons are ideal for when you really, truly need an enemy to die – but you’ll need someone to lead them… 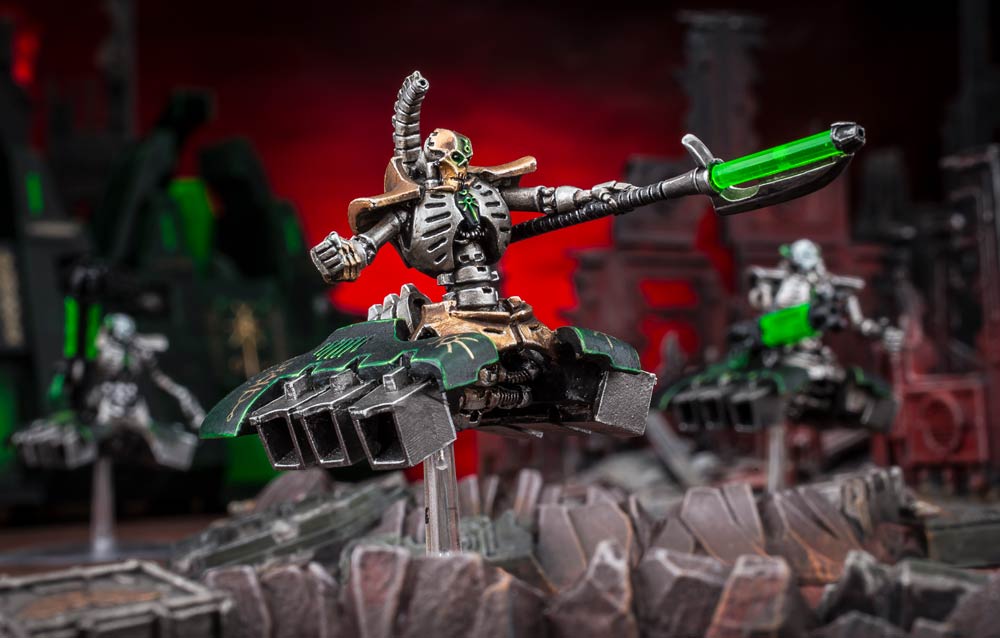 Yesterday, we looked into how Necron characters can be built to support the rest of your army, but thanks to the new codex, you’ll also be able to create some pretty deadly hero-hunters. A Mephrit Destroyer Lord with a warscythe is a brutal option, cutting through enemy armour and punishing anyone who tries to charge your lines.

Equip yours with the Voidreaper and there’s little that’ll be able to stand in your way – and what’s more, you’ll be able to tackle foes reliant on their invulnerable saves by utilising Entropic Strike. 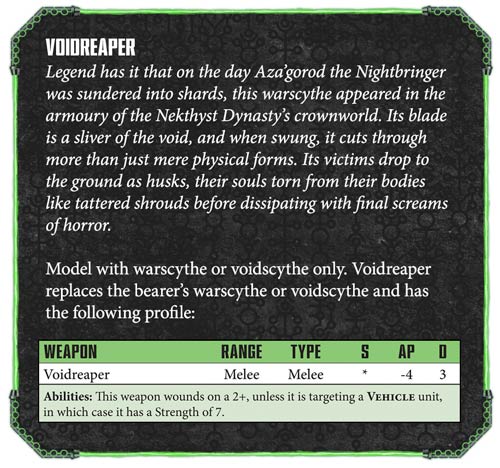 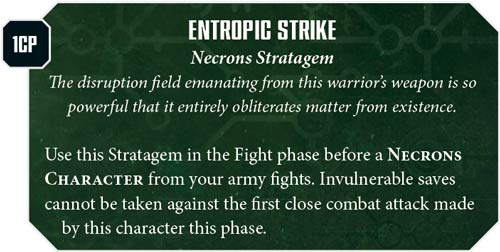 Another sneaky combo you could try is combining the Mephrit Warlord Trait, Merciless Tyrant, with their artefact, the Voltaic Staff. In the hands of your chosen Character, this will allow you to strip out enemy support units with terrifying ease. 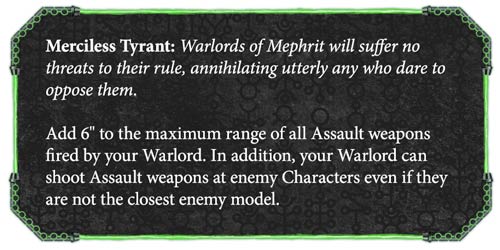 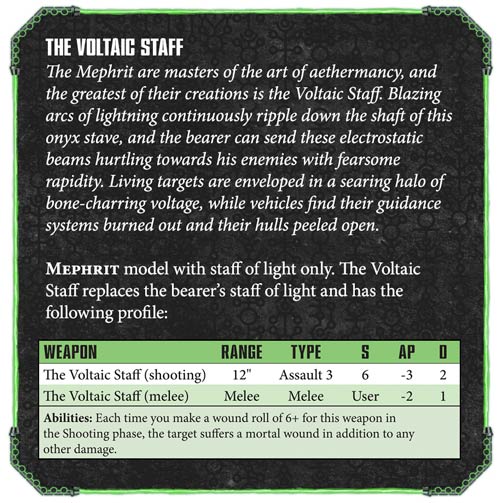 The Mephrit are a brutal close assault force that’ll tear through elite armies with ease – but they’re not the only Necron dynasty that specialises in short-range warfare. Tomorrow, we’ll be looking at the bloodthirsty Novokh Dynasty, and their surprising skill in close combat… 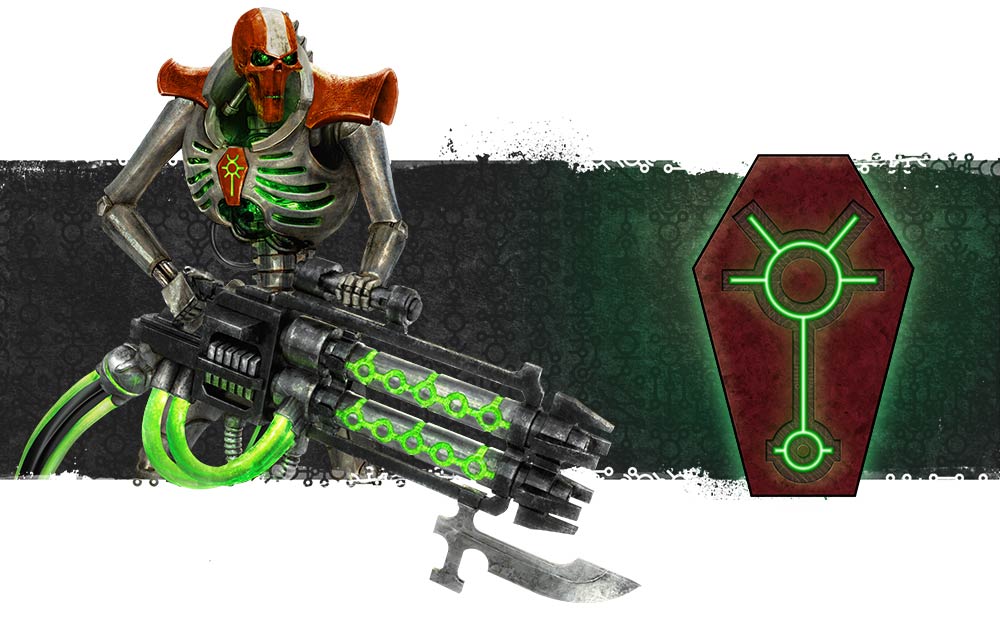 One of the most exciting things about the latest batch of codexes is the new types of army builds they’ve made available to Warhammer 40,000players. Codex: Necrons is no exception.

So far, we’ve looked at the unusually mobile armies of the Sautekh Dynasty and the short-ranged carnage wrought by the Mephrit Dynasty. More than the others, however, there is one Dynastic Code that reinvents how your army works.

Traditionally, Necrons are well known for being a shooting army, with a couple of deadly close-combat units to deal with anyone that reaches your lines and to hold down particularly dangerous enemies. The Novokh Dynasty turns this archetype on its head with Awakened by Murder: 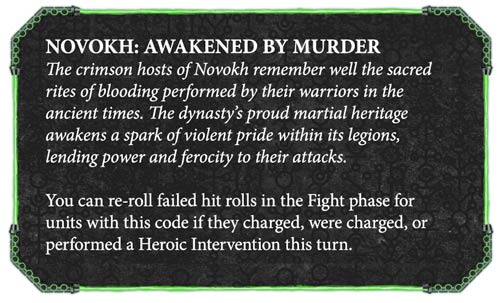 With this Dynastic Code, your close-combat units will be able to go toe to toe with whatever the enemy can array against them, while defensively, any enemy wishing to charge your shooting units will have to risk taking more casualties than they can afford in return.

There are several units that are particularly effective with this Dynastic Code, but our favourite has to be Flayed Ones. 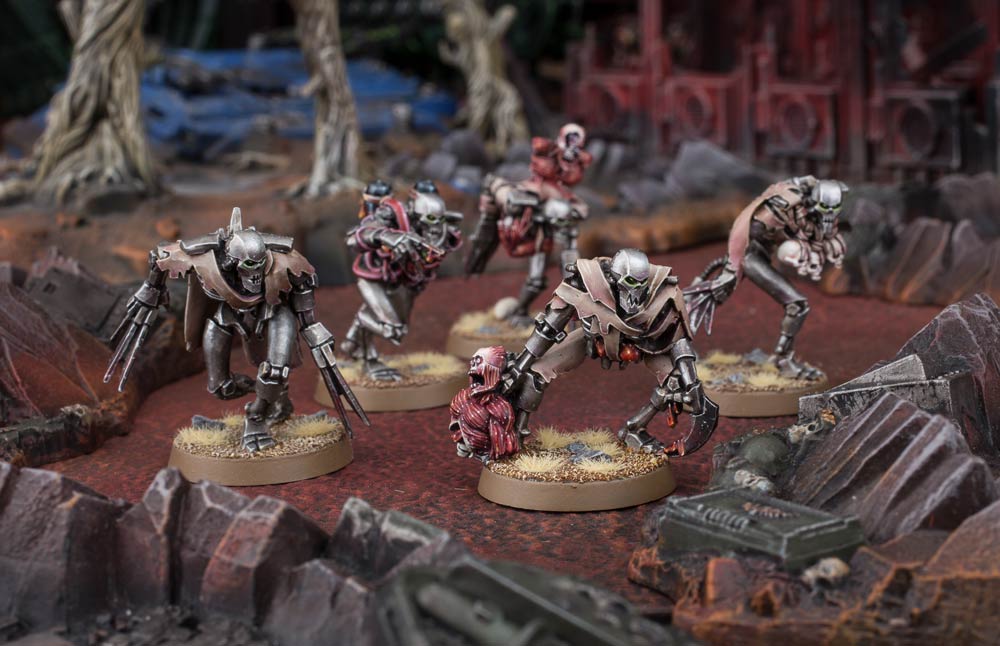 Having received a marked points cut in the new codex, Flayed Ones are a great option for a melee-oriented Necrons army. Matching the impressive durability of their brethren, Flayed Ones can tackle even the toughest enemies thanks to their re-rolls to wound, while the re-rolls to hit provided by the Novokh Dynastic Code are icing on the cake. We’d recommend going all-out and taking a unit of 20, then activating the Disruption Fields Stratagem for the best results. 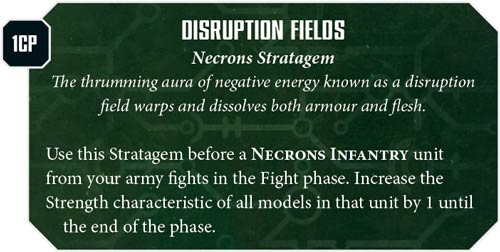 Enemies still alive? Give it another go with Blood Rites. 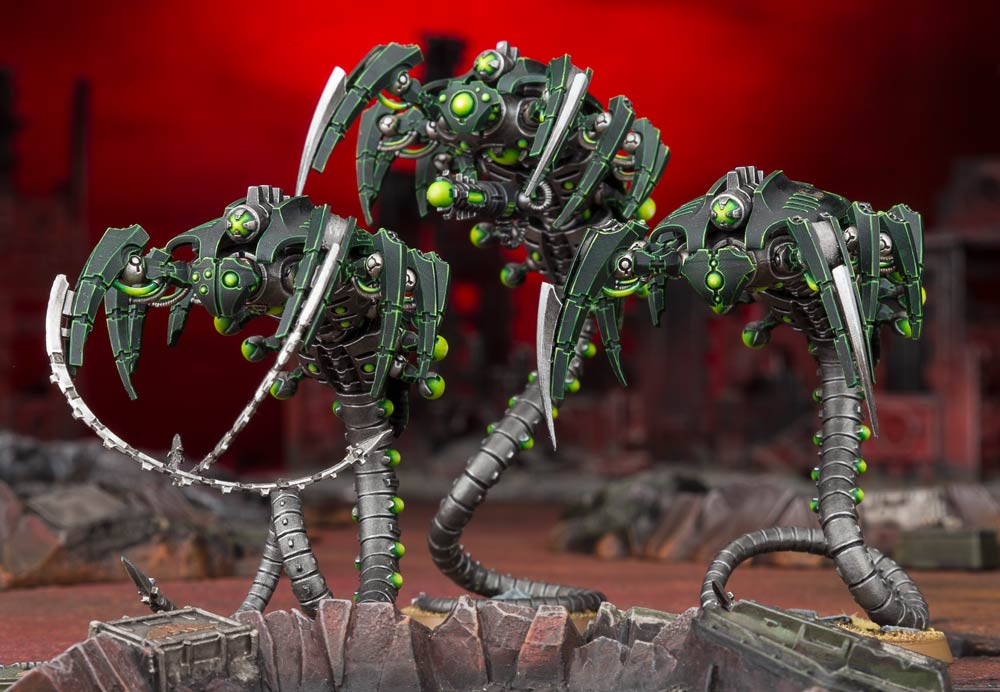 In Codex: Necrons, Canoptek Wraiths have been granted additional Damage and AP on their close combat attacks, making them superb hunters of heavy infantry. By using yours with Awakened by Murder, you’ll be able to ensure your attacks land and deal maximum damage when you charge.

Defensively, Canoptek Wraiths are even more difficult to get rid of. As if 3 Wounds, a 3+ invulnerable save and Toughness 5 wasn’t already durable enough, you’ll be able to bring units back from the brink of destruction with Repair Subroutines: 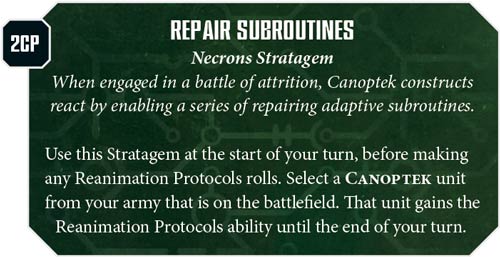 Make sure to keep a Cryptek nearby to ensure the best results!

Novokh Dynasty armies are ideal for Necrons players who want to take the fight directly to their enemy – or just fancy some insurance against getting charged.

We’ve looked at all sorts of unconventional Necron dynasties so far in our preview, but if you’re looking to field a more classic force, worry not – the Nihilakh Dynasty is ideal. Come back tomorrow when we’ll be checking them out.