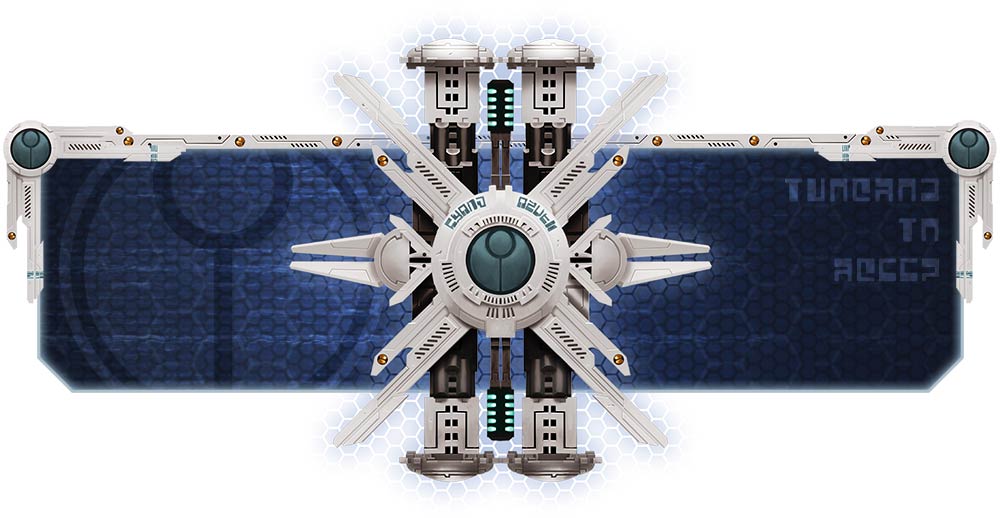 This article was originally published on the Warhammer Community site. Check it out for more great content!

One of the defining quality of T’au Empire armies is their prodigious range, allowing them to reach the enemy wherever they may hide with an array of far-reaching firepower. In this regard, no sept can match the reach of Bork’an, thanks to Superior Craftsmanship: 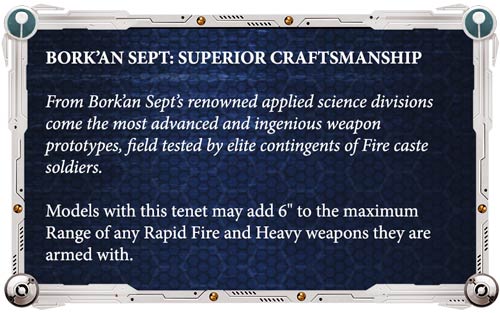 With this Sept Tenet, even your Strike Teams will be able to reach the enemy wherever they hide, while you take the best defensive positions on the board with impunity. 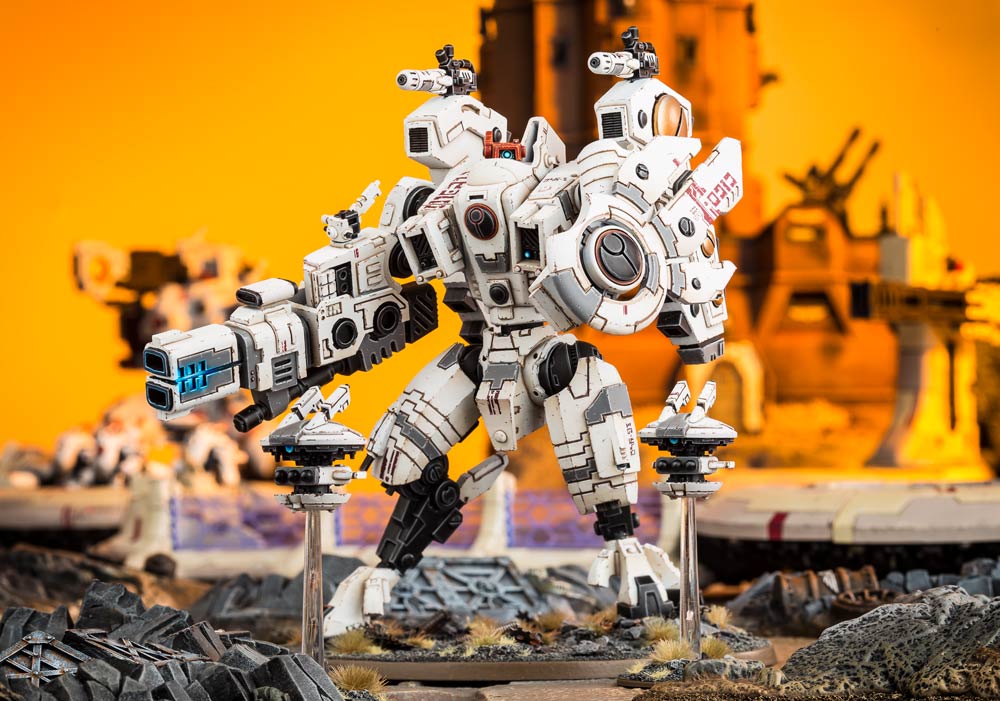 For many, the Riptide Battlesuit is the iconic T’au Empire unit, and with the new codex, you can expect to see a LOT more of them on a tabletop near you thanks to a suite of rules improvements. Firstly, the armaments of the Riptide have been tweaked in power to hit harder and have more shots, allowing you to deal more damage with this deadly war machine:

With the Riptide’s Nova Reactor, you’ll be able to make these weapons even deadlier, notably bringing the heavy burst cannon up to 18 – yes, 18! – shots: 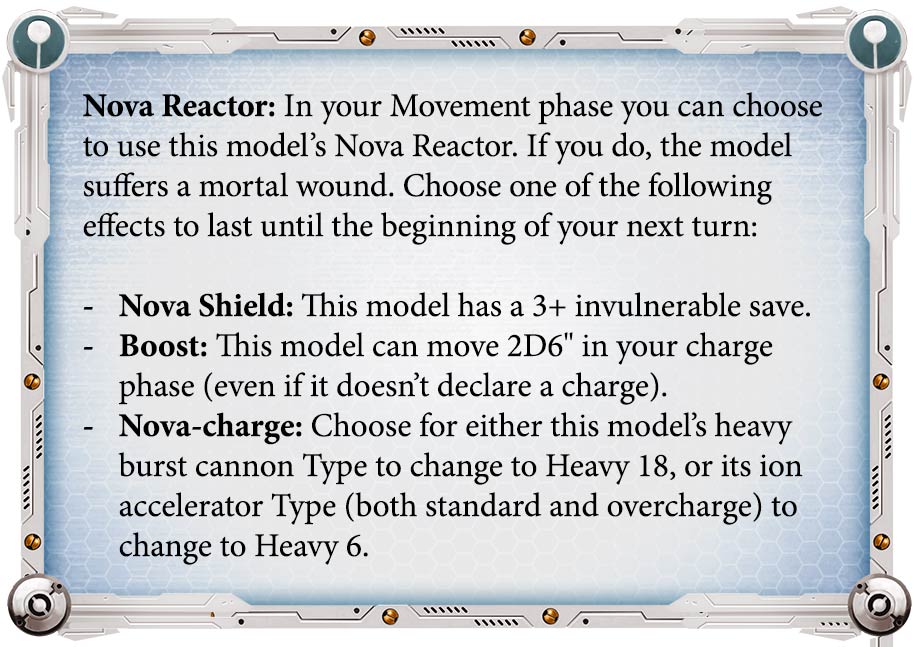 That’s not all! As well as benefiting from a range of battlesuit-specific Stratagems (we’ll be diving into these later in the week) the Riptide even has one of its own:

With the Bork’an Sept Tenets and these enhancements, you’ll be able to turn your Riptide Battlesuits into deadly mobile firebases, constantly maintaining a safe distance from the foe, dealing considerable damage with its Drones and an invulnerable save to soak up punishment at the same time. 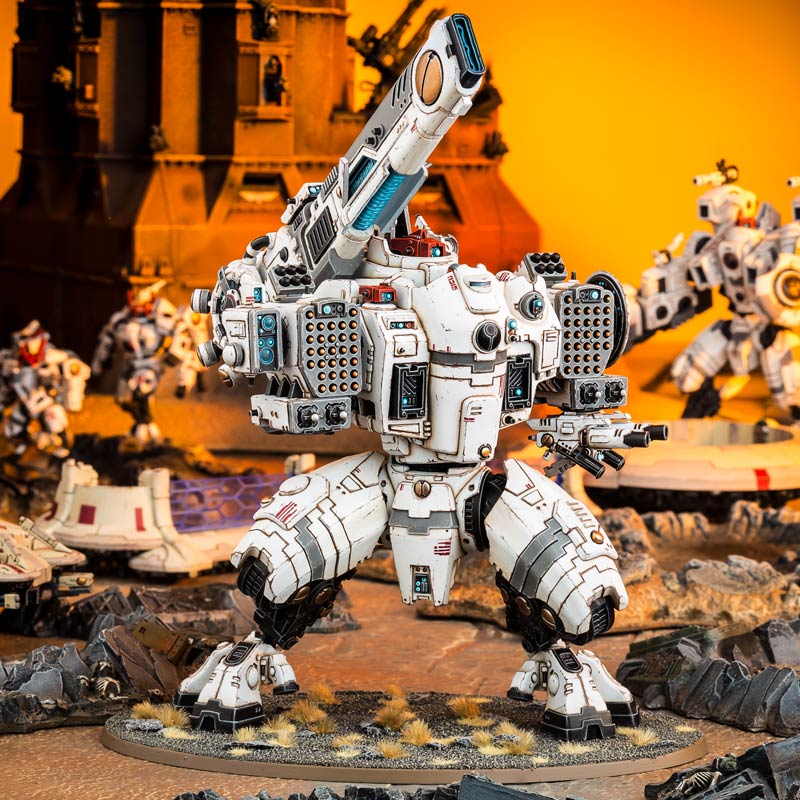 Already capable of engaging the enemy at terrific range, the KV128 Stormsurges of Bork’an find the extra 6″ range particularly useful when picking which profile to use for the pulse blastcannon, allowing you to utilise the armour-piercing short-range firing mode at a safer distance. If you really want to keep your distance, the pulse driver cannon is also super in a Bork’an army – and not just because it has an effective range of 78”. With the Experimental Weaponry Stratagem, you’ll be able to re-roll your random shots with the weapon, making it even more dangerous to your opponent: 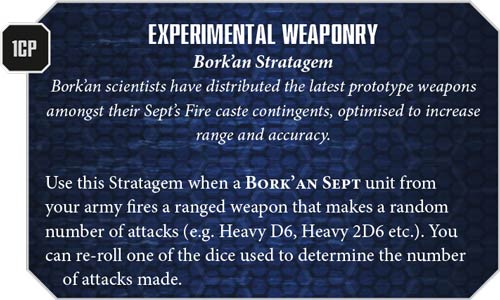 The Bork’an Sept is ideal for the defensive T’au Empire player – but if you’d rather play more aggressively, worry not – we’ll be checking out the close assault specialists of the rebellious Farsight Enclaves tomorrow. In the meantime, if you’re inspired to start your own Detachment of Bork’an battlesuits, pick up the KV128 Stormsurge here.