More Daughters of Khaine information. This time, talking about the existing models in the line.

This article was originally published on the Warhammer Community site.

A shadow is falling on the Mortal Realms – the Daughters of Khaine have come. Infused with sadistic cruelty and holy purpose, these brutal zealots will soon be yours to command, thanks to a new battletome, new units and of course, Morathi herself! In our latest preview, we’re looking at how several classic units have been revitalised in the new battletome.

The Daughters of Khaine live a dual existence, and few in the Free Cities know quite the extent of their power. Here, the Khainites operate in a legal twilight, their temples and lodges hidden away amid the maze-like streets and forlorn districts of these places of Order. Brave – and foolish – Aelves come to these places to watch the balletic death-rites as they dispatch foes in hidden arenas in praise to their bloody-handed god. 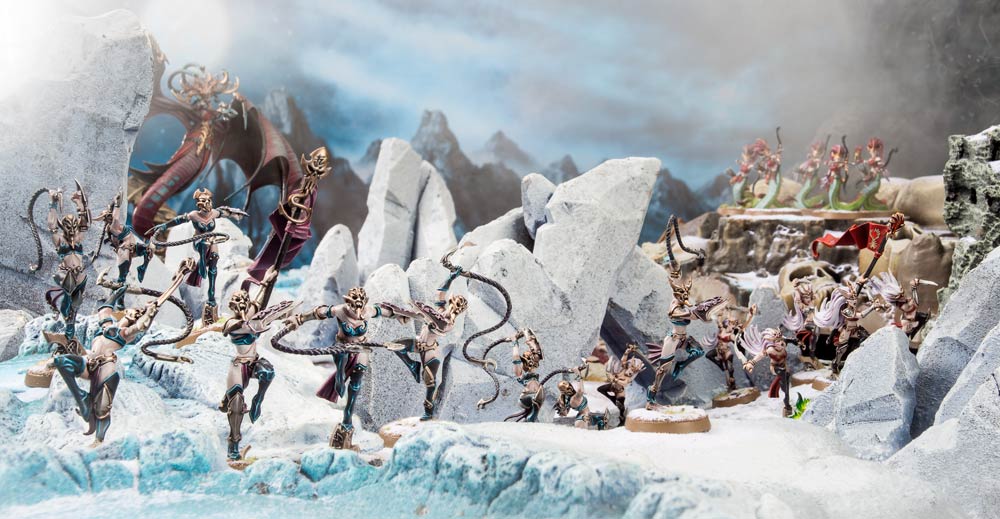 Previously, the Daughters of Khaine we’ve seen have represented these temples in armies, but the new battletome provides an opportunity to expand on how these armies fight and arm themselves. As such, you won’t just find new units in the battletome but a range of tweaks to existing ones, designed to open up more opportunities for your army building! 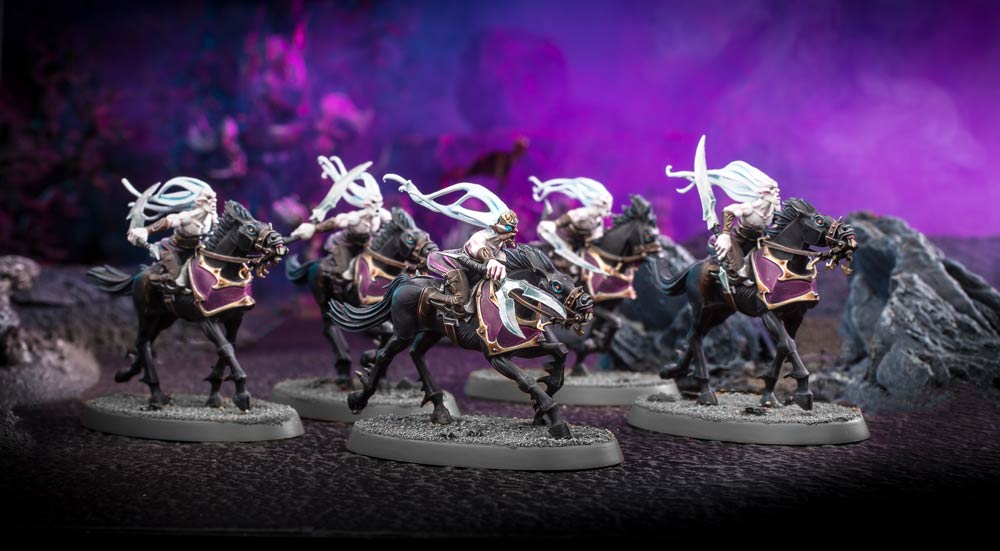 While most male Aelves in the Daughters of Khaine are wretched, servile things, twisted by Morathi’s own dark designs, some manage to survive and even thrive by drawing on the dark magics of Ulgu. These are the Doomfire Warlocks – part skirmishers, part deadly masters of sorcery.

Doomfire Warlocks act as light cavalry for your Daughters of Khaine army, and have been improved in several small ways. For one, they now wield Doomfire Crossbows, increasing their punch, while for another, they’re fully able to take advantage of the new Lore of Shadows. 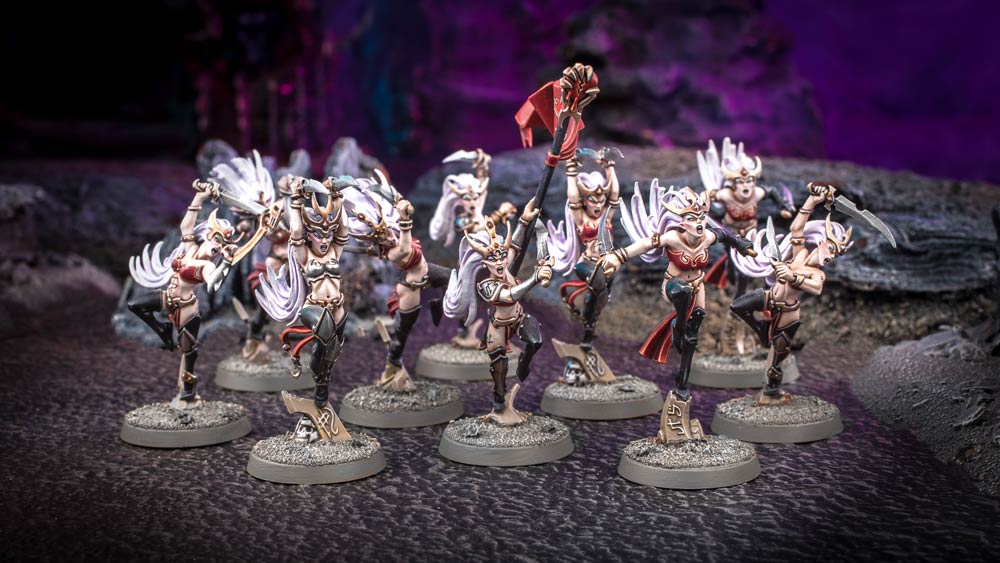 The Witch Aelves are the core of the Daughters of Khaine forces, alongside their more elite kin, the Sisters of Slaughter. Each is a highly trained zealot, honed by constant ritual combat and battle drills, and fuelled by unbreakable fervour. Every Daughters of Khaine army will want at least a couple of units of these warriors – they’re fast, they’re deadly and they’ve been adjusted to be even more useful on the tabletop.

For one, you can now arm your Witch Aelves with Bladed Bucklers in order to increase their durability and deliver mortal wounds to those who’d dare attack you. If you’re more offensively minded, you can arm your Sisters of Slaughter with offhand daggers to further increase their damage output. Both units can now run and charge – combined with their solid natural movement and Blood Rites’ ability, to let them re-roll 1s when they run, you’ll be able to close in on the foe rapidly and start the bloodletting. 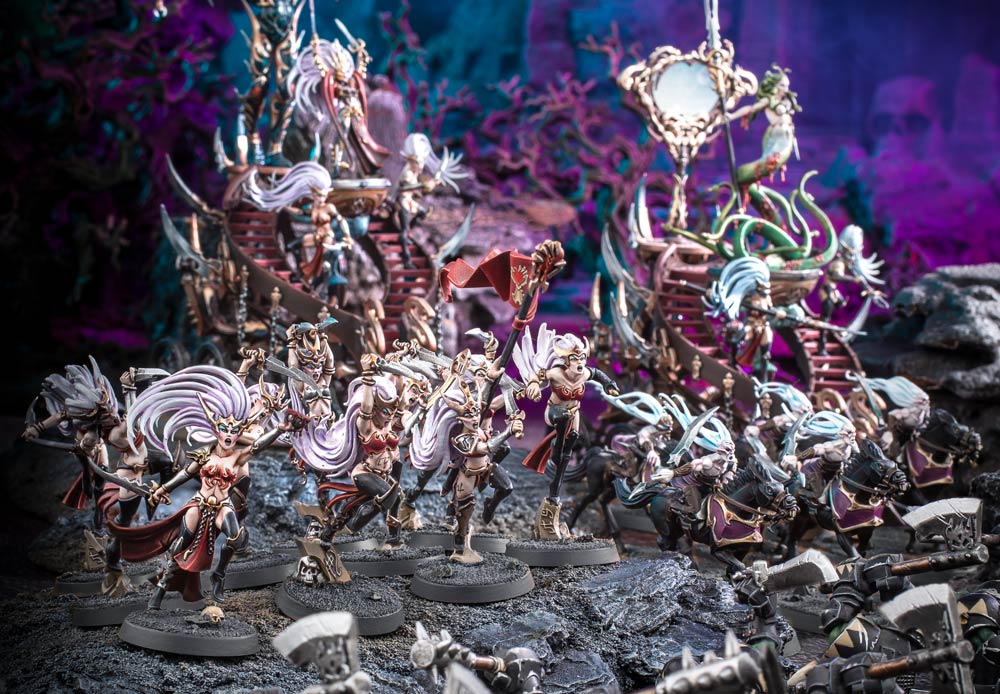 The cults of the Daughters of Khaine are relentlessly hierarchical, with various figures vying for power and influence in the eyes of Morathi at any one time. To help you represent this on the tabletop – and to provide even more options when filling out your Heroes slot – the Death Hag has been split into two unit entries: the Slaughter Queen and the Hag Queen. The former represents a more elite unit of the covens armed with a Deathsword and able to unbind spells with the Pact of Blood ability, while the latter is an invaluable lieutenant who can enhance nearby units with a draught of Witchbrew.

Both these characters can be mounted on a colossal Cauldron of Blood, and indeed, if you pick up this kit, you’ll be able to build no fewer than 6 different unit entries out of it: the Hag Queen, Slaughter Queen, either of them mounted on the Cauldron of Blood, the Bloodwrack Medusa and…well, we wouldn’t want to spoil all the surprises…

With these new and improved warscrolls, you’ll have all sorts of options when building your Daughters of Khaine army – all you need to do now is order your Battletome! Find it here.