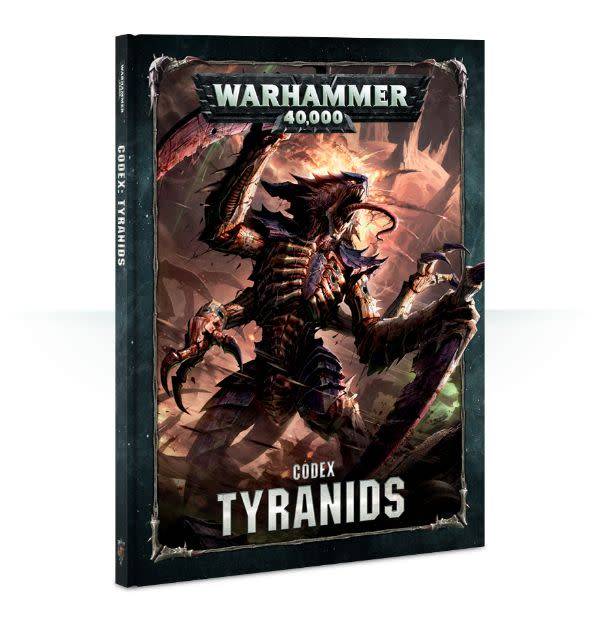 The Great Devourer is upon us, and in part 5 of this review we dive into the Tyranid Fast Attack units to explore what they have to offer! Be sure to check out Part 1, Part 2, Part 3 and Part 4 of this review if you missed it.

The Fast Attack slot has seen some shrinking for Nids as the Hive Crone and Harpy have become Flyers (which in all honesty, they always should have been). However, you have some fun and effective options here. 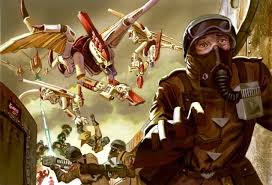 I have always been a fan of Gargoyles and have used them for years. In the index they were fairly lackluster as they simply didn’t present enough of a benefit to be taken over Termagants or Hormagaunts, however now that they have the ability to deep-strike they gain an entirely new utility. For 6pts per model that is an amazing benefit. As stated on this blog time after time, any unit that can deliver itself into battle via deep-strike or outflanking is solid gold. Not only for defense against the alpha strike but to respond to changing battlefield conditions and apply pressure where you have an advantage or to shore up your own lines where you are faltering. Gargoyles now give you this on a unit that has quite a bit of utility in addition to deep-strike. While their basic stats are nothing to jump up and down about at toughness 3, with a 6+ save and WS, BS 4+, they have the same weapon and rules as the Termagant in regards to re-rolling wound rolls of 1, and of course they can also use the Scroch Bugs stratagem in the same way Termagants can, and are a great candidate for the Caustic Blood stratagem to deal Mortal Wounds to your opponent as they kill the Gargoyles in melee. And in melee they have the cool Blinding Venom attack which if you deal even one unsaved wound to a unit they have a -1 to hit for the rest of that turn. Obviously, having them swing before the unit they are attacking can be very beneficial, especially when used in conjunction with a unit like Deathleaper who already has a -2 to be hit. I have had best results with Gargoyles by using them in conjunction with a winged Hive Tyrant as stated in Part 2 of this article series. To recap: I drop them in with a Flyrant and the Gargoyles surround him to protect him from smites and assaults. The pair then attack, typically digging in to my opponent’s backfield and grabbing objectives from them. Gargoyles are also excellent at taking up space as they have a huge footprint for such a cheap model, and can be used for excellent board control. They benefit most from aggressive Hive Fleets such as Hydra, Behemoth, and Kraken (who allows them to leave combat and still shoot and charge as they Fly), etc.

Raveners are a fun unit with some cool tricks. First of all, they have Tyranid Warrior stats but with a 12″ move, 4 base attacks and a 5+ save. As with Gargoyles though, their most valuable ability is that they can deep-strike. At only 23pts per model for basic kit, that is awesome. As you can take them in units of 3-9, they can be a great choice for filling Fast Attack slots in a Birgade, too. Again, any unit that can deliver itself into battle where you want them is extremely valuable and this is their main benefit over Genestealers who perform a similar role. Now, they come standard with 2 pairs of Scything Talons which don’t have any AP, but they do give you re-rolls of 1 to hit and a bonus attack for the 2 pair. 5 attacks re-rolling 1’s to hit on a model that is WS 3+ is a solid melee unit to bring into your opponent’s backfield. I run double Chainsword Vanguard Vets in my Space Marines army who pack 4 strength 4 no AP attacks each and they do work! Raveners fight in a similar way and in my opinion, that is what they should focus on doing: killing lots of low save units. Genestealers can take on the heavier units, Raveners can pack in lots of re-roll attacks to clear out screen units such as Brimstones or Cultists. However, if you’d like to beef them up a bit at the expense of an attack and re-rolls of 1 to hit in melee, you can give them Rending Claws for 2pts per model. You can also give them some firepower with your choice of Spine Fists, Devourers or Deathspitters. At BS 4+ this is an investment that really depends on how you plan on using them, but for me, the Spine Fist is not a bad choice as it is only 1 pt, can be fired in combat and gives you 3 shots per model. They may be only strength 3, but as these gents want to be in melee, it’s not a bad investment. The only real drawback to these guys is the fact that they need synapse. You have to consider that when using them as otherwise they will suffer to Instinctive Behavior and morale. With that piece of the puzzle in place, a unit of 9 Raveners popping up on someone’s flank and making a first turn charge with 45 scything talon attacks, or 36 Rending Claw attacks is going to sting. This is doubly true if you pop the Adrenaline Surge stratagem to make them attack twice. A unit of Raveners in that instance would pack in 90 Scything Talon attacks! That should easily sweep aside your average screen unit to clear the way for the rest of your army. As for Hive Fleets, Behemoth is an obviously awesome choice for them, but Kraken is also very good. Gorgon and Leviathan benefit Raveners quite a bit but we have to mention Jormungandr as they allow the Raveners to bring other units onto the table with them using their unique stratagem. 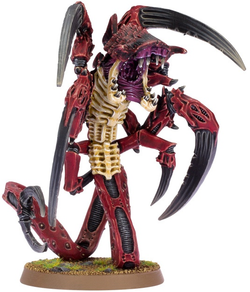 The Red Terror is a goofy looking dude, but he’s quite good. First, he’s actually an Elite choice but I wanted to cover him in this article as he interacts with Raveners. Secondly, he’s very affordable at only 75pts and he buffs Raverers (including himself) with a +1 to hit in melee, meaning they will all be hitting on 2’s. He’s got the same statline as a Ravener but with strength and toughness 5, and 6 wounds. His weapons are the same but he additionally has a Prehensile Pincer Tail which gives him a bonus attack in melee with it, which is strength 5, no AP, D3 damage. However, his really cool ability is Swallow Whole, which allows him to destroy an enemy model if he hits with 4+ of his Scything Talon attacks (and remember, he has 5, hitting on 2’s re-rolling 1’s to hit). Instead of dealing damage normally, he can opt to instead roll a D6 and if the number exceeds the highest wound characteristic in the unit, one model in it is slain. Gulp! If chosen as your Warlord, he comes with Heightened Senses, allowing him to ignore negative modifiers to hit which is cool when fighting things like Howling Banshees. If you plan on using Raveners as a part of your list strategy then it makes sense to take the Red Terror as his buff alone gives you a ton of utility. Plus, when you get lucky and gobble down someone’s key character in melee, that is a moment you will never forget, lol! 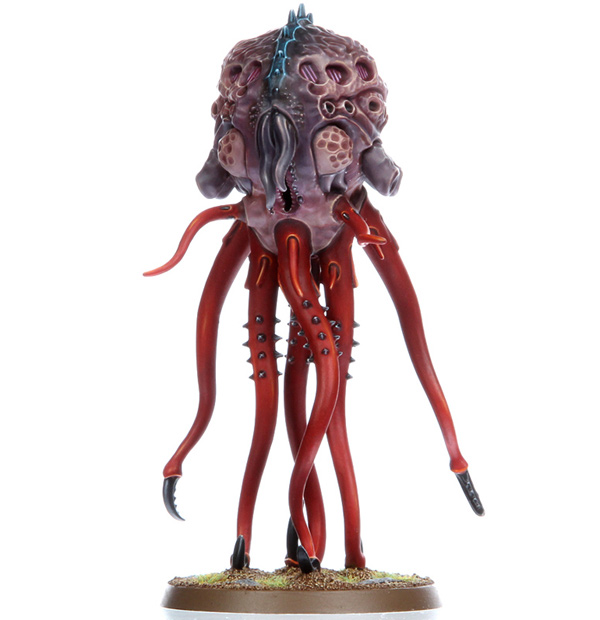 Mucolid Spores are mindless, living bombs. They’re cheap as chips at only 20 pts per model and come in units of 1-3 making them ideal for cheap Fast Attack slot filler. They also deep-strike which as we’ve mentioned previously, is great for on the table tactics. However, keep in mind they do have to land more than 12″ away from enemy units unlike the standard 9″ for most deep-strike capable units. The only weapons these little buggers have is themselves! If at the end of a Charge phase they are within 3″ of an enemy model they explode, dealing no damage on a 1, D3 Mortal Wounds on a 2-5, and D6 Mortal Wounds on a 6! Considering they have 3 wounds at toughness 3 with a 6+, they actually have good odds of surviving over-watch and man, they can pack a punch with that explosion. Lastly, they are created for free in matched play if another unit creates them, such as a Sporocyst. As they don’t count for any mission win conditions, the best bet is to either play them as backfield disruption units or on defense, dropping them down to block the route of enemy units coming at you. As they only move 3″, you need to put them where they need to be before they need to be there or the enemy can easily avoid them. 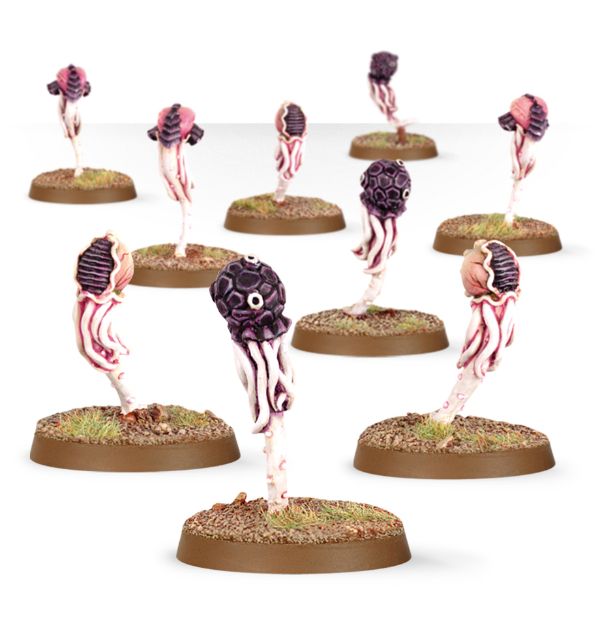 Spore Mines are incidental to Mucolid Spores in every way apart from the fact that they come in units of 3-9, cost 10pts per model, and are T1 with 1 wound and a 7+ save. They also do less damage when they explode, resulting in no damage on the roll of a 1, 1 Mortal Wound on a 2-5 and D3 on a 6. You play these exactly as you do Mucolid Spores.

Fast attack over and done, and on to Heavy Support, which you can read here.

← Signals from the Frontline #569: Tyranids Are Here!
Come By Frontline Gaming Today for Some Gaming and Deals! →

Leave a Reply to vybert