Josh here, General’s Handbook 2017 has been out for quite some time. There is a ton of new content and a boatload of changes to pre-existing content that change the game in a big way. In this article I’m going to discuss General’s Handbook 2017 and it’s impact on Blades of Khorne in matched play. For more tactics articles, check out the Tactics Corner!

I’m going try hard to stay away from reviewing GH 2017 as a whole. I really want to focus on how it’s impacted Khorne armies specifically.  I’ll review each change and expand on changes that I think will have a significant impact on list building for Khorne armies. 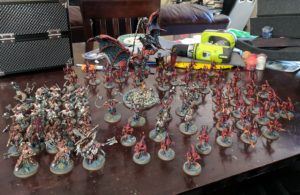 There are tons of unit changes that come along with GH 2017. These changes range anywhere from simple point adjustments to changes in wording. Here is a list of all the unit changes along with my thoughts on each change: 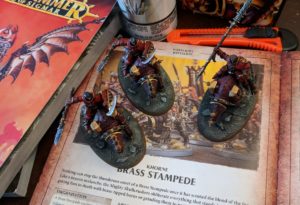 Battalions have increased by about a 100 points across the board. Do you take a cool ability that you can commit your list to? Do you take a balanced list that deploys more slowly than others? GH 2017 has a running theme of commitment. This is just one more example. Blades of Khorne takes this commitment theme a step further by providing a bonus ability if a player commits to a maxed out battalion. 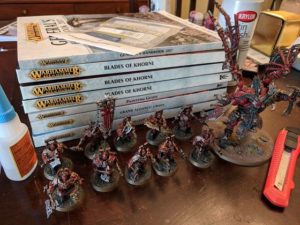 There are tons of new FAQ’s that GW has answered. Most of them have little to no impact, but a couple of them can have a pretty big impact on how we play the game. Here are the FAQ changes that I think are the most important:

GH2017 has introduced Allies. Effectively, you can still maintain your allegiance while running a few units outside your allegiance. The number of allied re-enforcements you can use depends on the size of the of the game. Just keep in mind, allies don’t gain any benefits from specific allegiance abilities. Fortunately for us this isn’t really a big deal. We benefit from anything that dies. Here is a list of the allies that can be used with Khorne along with some of the more notable units they contain:

Anyway, those are my thoughts on the Khorne related changes we’ve received since GH2017. I’m sure there are things that I haven’t noticed yet. If you can think of anything, please feel free to share in the comments section. I’m always looking for new and exciting ways to perfect my game. Thanks for reading.

Posted on November 6, 2017 by Josh Keal in Age of Sigmar, Tactics