Is the New Astra Militarum Codex, just too juicy for you to swallow? Welcome to my take on the most efficient units in the new Codex! Onwards for the Emperor! Check the Tactics Corner for more great articles!

Hey guys, BigVik here with my take on the most efficient units in the Astra Militarum Codex. First I’ll be looking at how I measure efficiency of firepower and toughness for speed bumps to keep those guns firing! 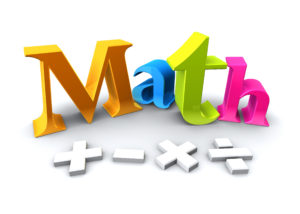 I measure my points per wound and total average wounds against 2 primary targets, MEQ (T4, 3+ save), and Knight Equivalent (T8, 3+/5++ save)

This gives anti-personnel weapons a good measure of points efficiency against MEQ, and knight defensive stats because there are a growing number of 8 vehicles, and thus I want to look at the “worst case” for how efficient the wounds will be.

A weakness I feel is inherent in the system is that it lowers the value of STR 8 weaponry, though I don’t have straight data on this. As a presenter of my research into this subject matter I want make sure that people are aware of this possible weakness in the ensuing data

Toughness against shooting (points per wound inflicted upon the unit):

I use an efficiency coefficient of a speed bump units using (points per wound inflicted)/ (points per wound in unit). I measure this against 3 weapons, a bolter from a tactical space marine, a devastator with a grav-cannon with grav amp, or a lascannon from a devastator marine. This is mostly because my Meta seems to mostly be space marine players.

So let’s get down to the numbers.

We’ll be looking at things on a per slot basis, and will be concentrating on codex entries as opposed to Forge World units as well, due to the much larger data set I would have otherwise needed to follow, of course I did the math on Earthshaker batteries, because yes. 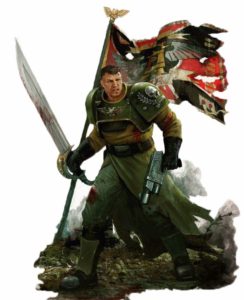 Straken is the odd duck, he’s a melee beater, who buffs the attacks characteristic of Catachans around him, if you want to have the scariest conscripts in the imperium, take this guy and a couple priests to put the fear of the Emperor into some lawnmower units.

Combined with the unique orders these guys can really ramp your damage output, and utility for your units, take a bunch

Lord Commissar/Yarrick/Commissar- Commissars make your conscript units not evaporate after that bad turn of taking wounds, and Yarrick is the hardest to kill single in faction character including his character protection, along with a very powerful re-roll all 1’s to hit while within 6’ of him, he’s great

Ministorum Priest- These guys give an additional attack within 6’, making them a great support choice for Bullgryns and Catachan Conscripts

Astropath- These guys cast the support powers for Astra Militarum like psychic barrier, or Nightshroud to increase your speedbumps’ ability to survive, or even the other powers which are all useful in certain circumstances. His only ‘weakness’ is that he casts smite on 1d6, meaning he truly is just used to be a tool box. Did I mention these guys are cheaper than Malefic Lords? Oh yea, they also remove cover from closer in enemy units. Eat your heart out Forge World!

Ratlings- these guys are the most points efficient sniper rifles in the game, why are they speed bumps? Because WE FREAKING NEED’EM. They create the first layer of the onion to chew through, across the board from your lines. Oh you went first accidentally? Cool they remove your opponents commissar quite will with around 15 of them shooting, that’s how many you took for a screen? What a coincidence!

Scout Sentinels- These guys are the second layer of “Don’t deep strike me, bro!” They have a scout move which will ensure just about the entire board is covered in bubbles of no deep strike for the first turn or two, and they can take heavy flamers, anti-flyer anyone?

Bullgryns- Now we get to the math, perhaps the toughest per point models to kill. These guys will be taking the Slab Shield to get +2 to their saves, an astropath will cast psychic barrier, and against shooting, if the weapons have AP, you will be using the stratagem to make them ‘Take Cover!’ for a grand total of a 0+/2++ save, keeping in mind that 0+ still fails on a 1. Where is the invul coming from? Why Celestine is in your list, isn’t she?

Points per wound in unit=14

The cheapest wounds in the codex, we’ll be assuming Celestine is in the army with +2 save from the psychic power and Take Cover!

Points per wound in unit= 3

Crusaders- These guys are the easiest to use, they have a free storm shield, at 15 points per model, they can have Nightshroud cast on them for -1 to hit, then Take Cover! Stratagem against shooting.

Points per wound in unit=15

Lascannon=3.6 marines per wound-> still don’t do it, man!

So for the purposes of soaking wounds, conscripts with Celestine and an astropath seems to be your best bet due to the nature of multi damage weapons in this edition, though keep in mind that conscripts do almost zero work, and will be mulched by berzerkers, while bullgryns can hold down just about anything for a turn or two, and have those SWEET maces that hit like a ton of bricks with good support. 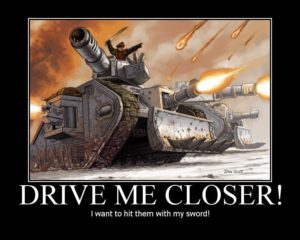 Tank Commander/Knight Commander Path- these guys are supped up leman Russes, and are straight more efficient than regular Leman Russes on a per wound basis, but will be using the same load outs. Something to keep in mind is that Tank Orders can really add to your survivability depending on what you need

Primaris Psyker- the next best thing to Malefic Lords, these guys can have an inventory of support powers, but will most likely largely be casting smite, due to the Astropath’s weakness for casting said spam power. I love these guys, because once your opponent closes to your lines, these guys can smack pretty hard for their points at 3 3+ to hit star 5 d3 damage hits! Oh you have a priest and Yarrick around? Sweet!

Militarum Tempestus Scions- these guys are not particularly math efficient, though they are a troops unit that can grave shoot in and claim objectives, they also can carry volley guns, sit in a ruin and throw pot shots out 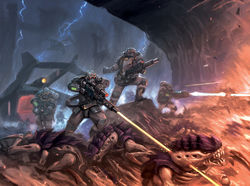 Master of Ordnance- Do you NEED that one vehicle to die? AM has got you! This guy calls in a onetime use mini earthshaker shot, with 4+ to hit outside of line of sight, this guy can have his uses!

Special Weapons Squad- these guys are a strange choice, they really just abuse the fact that flamers are 7 points and always hit, sounds good to me, put two squads in a Valkyrie and drop on objectives, or get those last couple wounds on something

Militarum Tempestus Command Squad- these guys have changed, since they now only have points efficiency when using volley guns, let’s see how well those work. 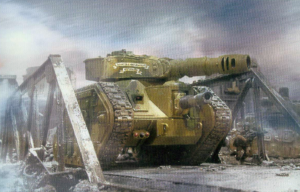 Leman Russ (Anti-tank build)- these guys will be going battle cannon (THEY WORK AGAIN!!), hull mounted lascannon, and 2 plasma cannons, and with the change to the plasma vents, OVER CHARGE EVERY TURN, BABY!

Leman Russ (Anti-personnel build) – These guys are not QUITE the most points efficient anti-personnel in the codex, but they’re tough, cheap, and have objective secured, so let’s look at this bad boy

Basilisk batteries- Are these guys the most points efficient anti-tank in the game right now? Let’s see…

This look scary? Look at the ShadowSword below! 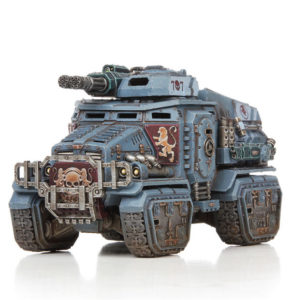 Taurox Prime- these guys… down in point… yea one point, the tank went up 5, and the 2 volley guns went down 3 each, oh and they have exploding 6’s to hit at half range now… yep, they’re still here, I still own 4… 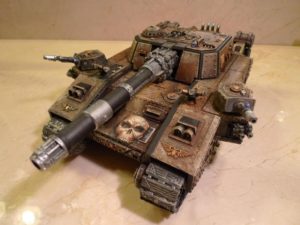 ShadowSword- The king is dead, all hail the king! This guy can ALMOST kill a knight a turn! Oh, they also went DOWN 40 points, and the main cannon became MORE reliable at the cost on average a shot a turn, I’ll take it every time!

Keep in mind the numbers against knights includes the +1 to hit against targets with the titanic keyword.

Well this is my take on the points efficiency for Guard, tune in next time for my first in a series of articles to show off builds that take advantage of each regimental trait to make interesting (read as broken) list combinations and how I think they’ll end up playing!