Hello fans of Frontline Gaming and TFGRadio, SaltyJohn  here to bring you a review of the new 8th edition Chaos Space Marines rules for the Exalted Champion! For more reviews, bat reps, tactics discussions, and analysis check out the Tactics Corner!

Warbands of Heretic Astartes cut swathes of destruction across the Imperium of Man in the name of the gods of Chaos. Led by might Lords of Chaos whose names are infamous legend in the Imperium these masses of Heretics, Adeptus Astartes, and Daemons sow death and destruction across the Galaxy but war on such a scale requires more than the leadership of individuals no matter how powerful. The Lords of Chaos have many servants at their disposal but perhaps their greatest assets are their Exalted Champions, those heretic Astartes who are blessed by Chaos and constantly vie for placement as next in line to be Lord of the Warband. Through battle with the mightiest of their foes the Exalted Champions inspire their fellow warriors, win their respect, and lead their masters minions into battle in the name of the gods of Chaos. The Exalted Champions of a warband are a glory to behold upon the battle fields of the 41st millennium as they cleave through their foes and inspire the soldiery of Chaos to do the same. 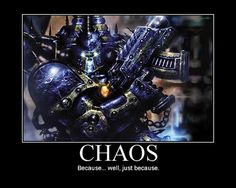 In 8th edition Warhammer 40k there is a dirth of ways to get massive re-rolls the way we once did in the dark days of 7th edition. While re-roll of 1s is fairly common the ability to re-roll the totality of missed rolls is more rare and it usually comes with a type of limitation. The Exalted Champion is one of two characters that when paired together gives units in Assault a huge boost to their damage output, the other is the Dark Apostle. The Exalted Champions of Chaos are the heirs apparent to the Lords of the Chaos Warbands, as such they have the ability to command and inspire those around them. The Exalted Champions play the way you’d expect the second in command of the Chaos Warband to play, this is a great trend in the 8th edition codices thus far. 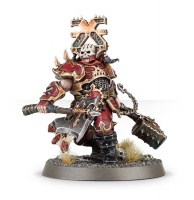 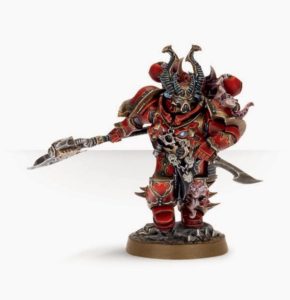 The Exalted Champion, like the Dark Apostle, is an excellent Character to run in a list that wants to utilize Assault as a lynch pin to it’s success on the battle fields of the 41st Millennium. The Exalted Champions excellent Melee stat line, couples with his ability to take items from the Melee Weapons list and his own special rules makes him a real beast in Close Combat for a unit that starts out at a mere 70 points.

Like the Dark Apostle the Exalted Champion will shine in a support role to army lists built for assault. However like the Dark Apostle they cannot take Wargear that allows them to Deep Strike onto the board from Reserves. So in an edition as lethal as 8th this leaves only a few options for getting these types of assault oriented units and lists into the enemy lines before they’re shredded. The first is Transports and the second is Advanced Deployment/Infiltration. 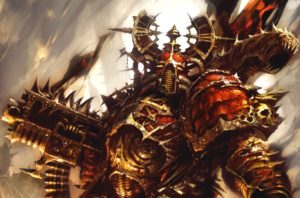 Like the Dark Apostle the Exalted Champion has two Legions it fits in quite naturally with, also usually it should be accompanied by a Dark Apostle, and those are World Eaters and Alpha Legion.

Alpha Legion provides the Exalted Champion with the chance to be deployed 9 inches from enemy models for 1 CP. Beyond that however it allows the Exalted Champion to be deployed within 6 inches of a Friendly Legion unit deployed just outside 9 inches from the enemy. The benefits to a strategy like this mean you can wrap the Exalted Champion, and Dark Apostle, in a unit or two that can assault the enemy turn 1, re-rolling to hits and to wound failures thanks to the two champions. If you design the list correctly you can even have a few second and third wave units ready to follow up if your first wave gets shredded. The best units to go along with this Strategy tend to be Cultists, as meat shields, Khorne Berzerkers because duh, and Possessed (if you can fit a Daemon detachment with the Changeling in there somehow). 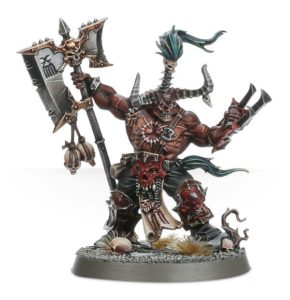 Another great way to run this, like I mentioned in the Dark Apostle article, is with World Eaters. You take units of Khorne Berzerkers in Rhinos, either screened or followed up by Khorne Cultitsts, in units of 8 so there’s room for a Dark Apostle and Exalted Champion. Drive towards the enemy fast, assault and follow up.

Don’t forget the Icon of Wrath on those units of Berzerkers either. Even though you deploy close in an Alpha Legion list, or get close in a mech World Eaters list fast, the re-roll of charge distance is not to be underestimated. A couple artifacts stand out as good additions to these lists as well. The first would be the Black Mace on the Dark Apostle. The Axe of Blind Fury on a Khornate Exalted Champion isn’t bad either but losing the re-roll to hit on rolls of a 1 does suck. The Murder Sword, while situational isn’t bad for an Exalted Champion, and the Talisman of Burning Blood can make sure you get the Exalted Champion into a combat that’s further away than normal. These are all situational however and likely you’ll want CPs for something else.

Like the Dark Apostle the Exalted Champion has a very specific style of list he is useful in. If you’re going to build that kind of list though he is practically an auto-include choice as for his points he buffs the units in that list better than anything else in the CSM codex.