Tournament Report: The Stormcasts go to a GT!

This past weekend there was a nice 2 day AoS GT not too far away, so I brought my Stormcast Eternals up to play a bit! 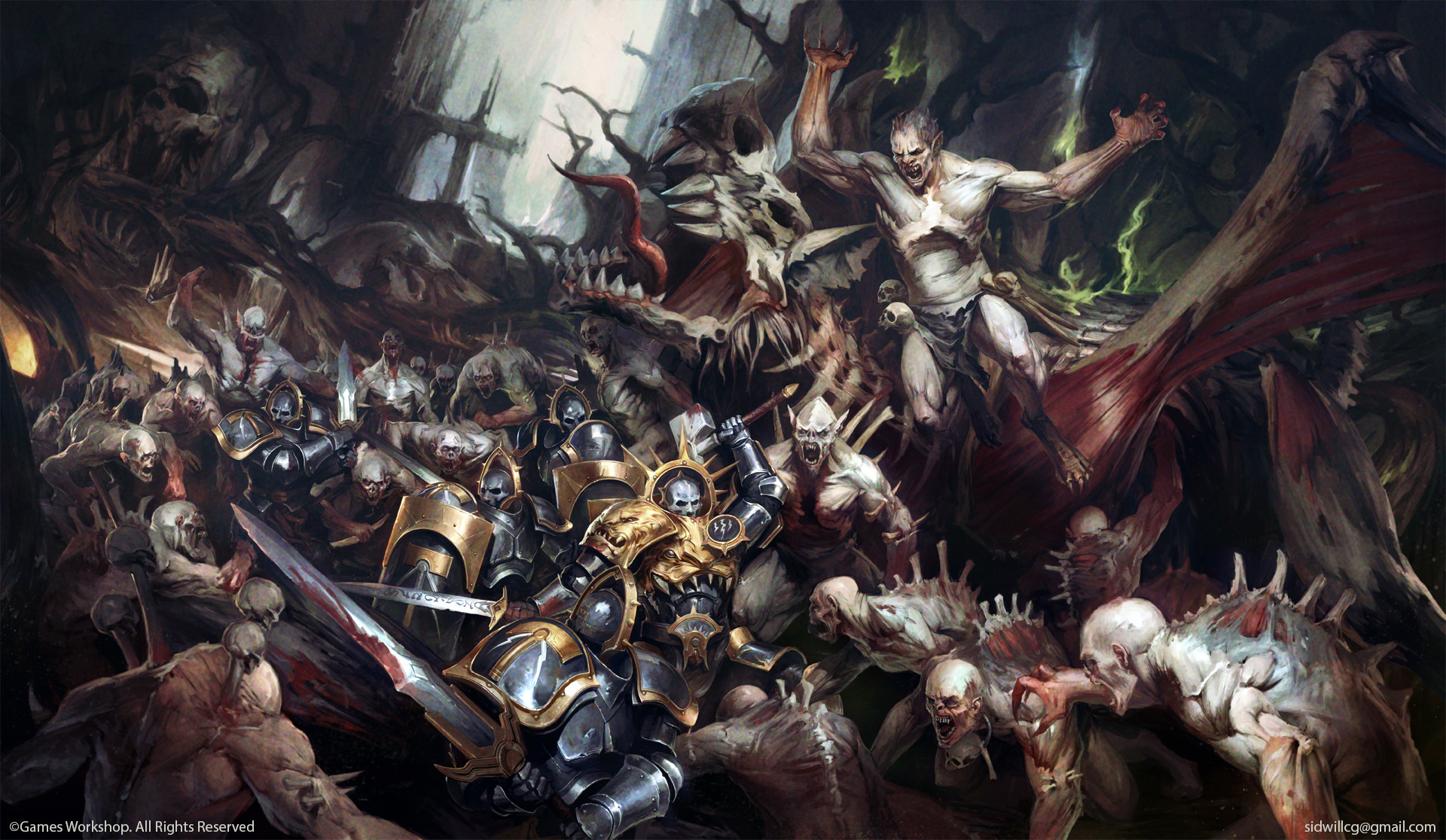 The Anvils of the Heldenhammer!

This is a list I’ve been playing for a while and I’m fairly comfortable with, so even though I didn’t get my new list painted in time I was happy to bring this! It plays super Alpha Strike heavy and tries hard for the double turn, while the shooting units support from a range and then try to keep backfield objectives.

For those of you who don’t know, the Skyborne Slayers battalion lets me set up all the highlighted units in the sky during deployment and then bring them crashing down, all in a single movement phase in a small bubble, 5″ from the enemy. It lets me get really close but hampers mobility by forcing them all to deploy within 12″ of one another. But being able to drop 6 Starsoul Maces right into enemy lines is super good! 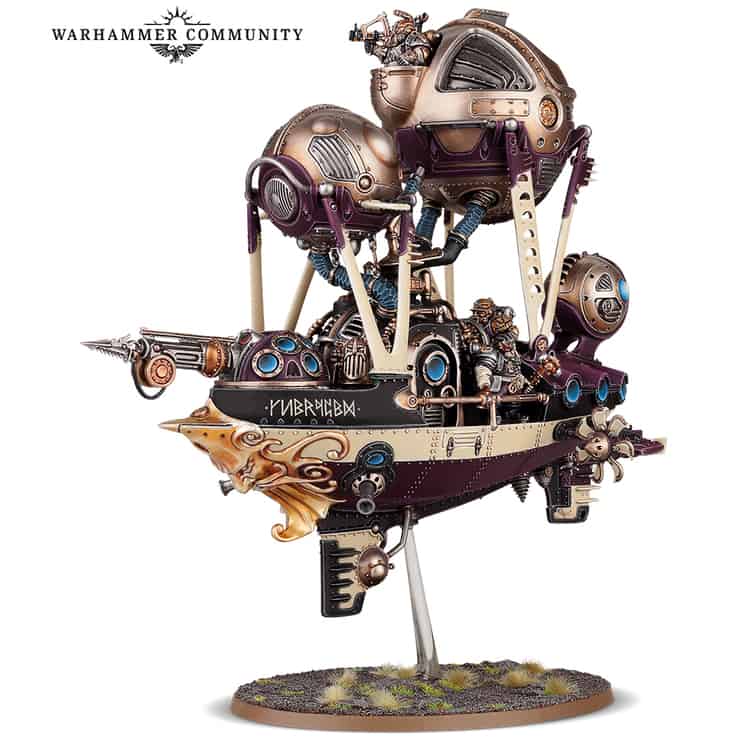 Game 1 against Kharadron Overlords in Battle for the Pass.

He put both heroes, a unit of Arkanauts, and the Endrinriggers in the boat, and I put everything in the Battalion off the table as normal. I give him first turn, and he tried to kill everything on the board with the two Endrinriggers who popped out of the ship and got buffed up T1. They didn’t do much, only killing the Aetherwings and 2 Longstrikes due to some bad dice rolls and good interference from my Aetherwings messing up his charge. I dropped in and over the course of the double turn, killed 16 Endrinriggers and the boat, while the Knight-Venator sniped his General. Ouch!

It was largely over at that point – the remaining Endrinriggers put up a valiant effort but couldn’t cut through me in time, while the Arkanauts did some good damage with the Skyhooks but got whittled down once the rest of my army got into them. It ended with my Lord-Celestant in an epic 1v1 with his last Aether-Khemist, which was his last model on the table!

Major Victory to the Stormcast!

Game 2 against Tzeentch on Duality of Death.

Extremely hard matchup + mission that favors him more, so I was sweating bullets. Even without Skyfires, his army is an absolute counter to mine with the amount of damage it can do and the Destiny Dice. I gave him first, as is normal, and he just castled up and didn’t move out other than summoning a Daemon Prince on one Objective. I shifted up with my Venator to try scoring some points while I could, and then dropped in on the other objective that the Prince was holding. I made some real mistakes – I charged my Protectors in such a way that I tied up his Enlightened and Prince, but the spread out made them way less effective over the turns, I placed my Lord-Celestant in range of one of the strongest damage dealing spells in the game, and I targeted weaker characters instead of trying to drop the Lord of Change as quickly as I could. I did some serious damage to his army – killed off a unit of Pinks, his Prince, the Gaunt Summoner (on a Balewind, no less), and the Blue Scribes, but failed to get the double and his Enlightened just tore through me while the Lord of Change pumped out an insane amount of MWs.

If I had positioned and target prioritized better (should have killed the LoC instead of the Scribes and focused less on the Enlightened), it may have been a game, but I got tabled by bottom of 4.

Major Loss for the Stormcast! Game 3 against Ironjawz on Starstrike.

First time against Ironjawz since the new GHB came out. It seemed like a scary list, but my opponent misplayed quite a bit. He won the first dice roll and therefore deployment, and gave me first turn. I didn’t move, other than to shift up a bit with the Prosecutors and back a bit with my Longstrikes. He then made a questionable decision by moving all of his units forward and leaving his Heroes in the backfield open. I then dropped in, instagibbed his Mawkrusha and a couple of the foot Heroes, leaving his Gore Gruntas stranded on one side of the board, the Brutes near by backline, and the Ardboyz on the far side. He did manage to get off a Foot of Gork that blasted off 3 or 4 Protectors, but by that point the Stars had fallen and I held them. I wiped the Gruntas and Heroes, left him with just foot dudes, and we called it when it was clear he couldn’t catch up to me in points. 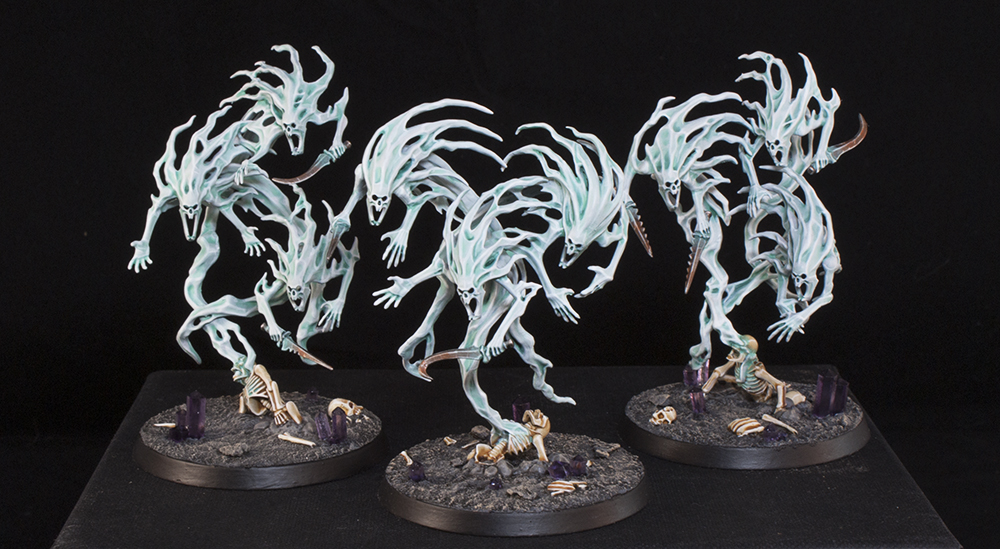 Game 4 against Nighthaunt on Knife to the Heart.

Always hard to get a Major here. He started both Mournguls, a Banshee, and the small Spirit Host unit off the table while surrounding his Objective with the rest of the stuff. He dropped in, failing one Mourngul (even with the reroll trait!) and bringing in the rest. His Spirit Hosts made it into combat with a unit of Judicators I started on the table (you can split the Battalion in deployment), and failed with the Mourngul. In my turn I dropped in to midfield and went for the glory play. The Knight-Venator and Longstrikes popped one of the Tomb Banshees, I charged my Decimators into one of the Wraiths, and then the Judicators and Lord-Celestant dropped the second Wraith, leaving only his Tomb Banshee General.

Then, I got the double! Finishing off the General meant that he no longer had Heroes, so couldn’t roll to bring in the second Mourngul, saving me 400 points of sheer terror. After that he knew it was pretty dire straits, so he circled around his objective super hard, pushing for a Minor Loss instead of a Major. The last couple turns were pretty grindy, neither of us killing much (the whole army ignoring Rend is so good), and ended up going to kill points, which I won handily since he only killed a couple units total.

Minor Victory to the Stormcast! 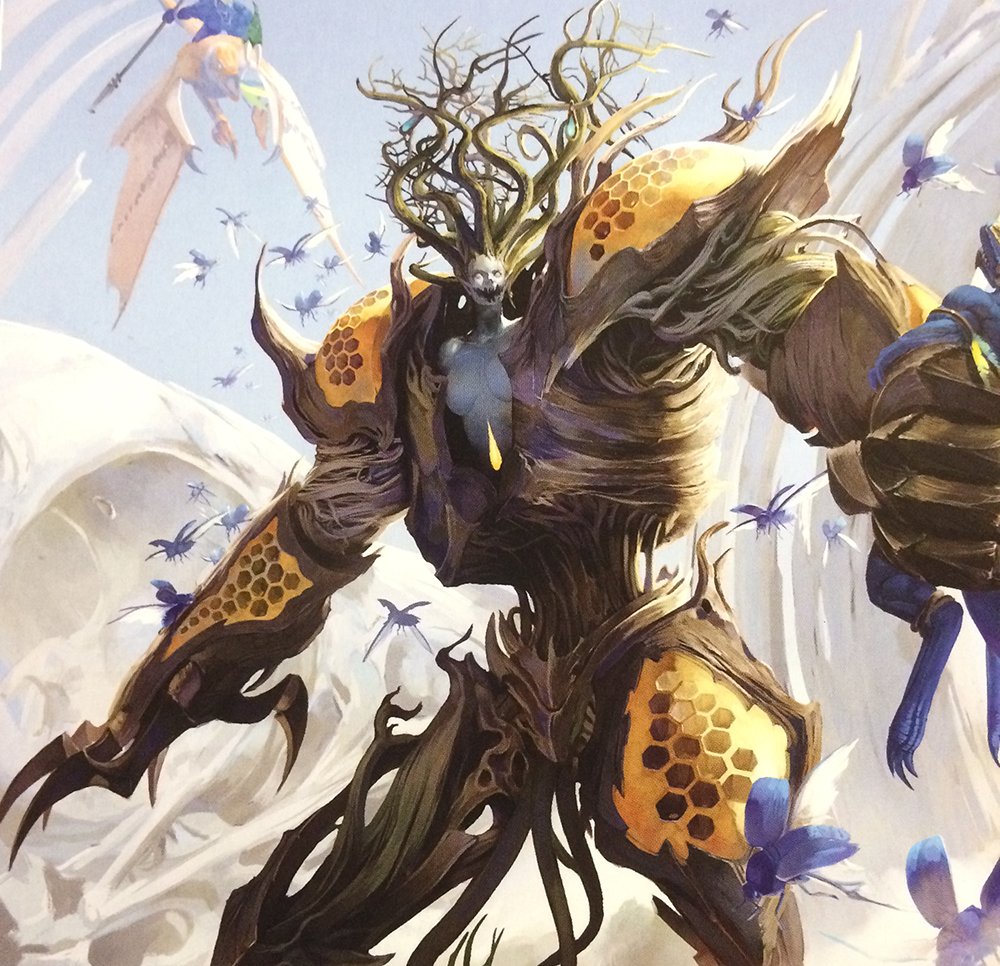 Game 5 against Sylvaneth on Scorched Earth.

Crazy game. Hard matchup for me I would say, since he has the advantage in mobility and multi-damage, but I have the Alpha Strike.

I gave him first, and he dropped a forest in the middle of the board, which let a unit of his Revenants teleport to one of my objectives and burn it! Luckily for me, though, he whiffed his shooting on my Longstrikes, only killing one and hurting another.

Then I brought down the hammer! I dropped on the flank far away from the melee Hunters (those things are terrifying) and did major damage. Killed the Branchwraith, all the Dryads, 2 Bow Hunters, and all but 1 Revenant in each unit. And then I got the double, letting me kill another 2 Bows, the Treelord Ancient, and the remaining Hunters before he got to use them!

While this seemed really one-sided from this point, he rolled much better on his objective burning than I did and we ended up tying in points, bringing it to Kill Points.

Minor Victory to the Stormcast! 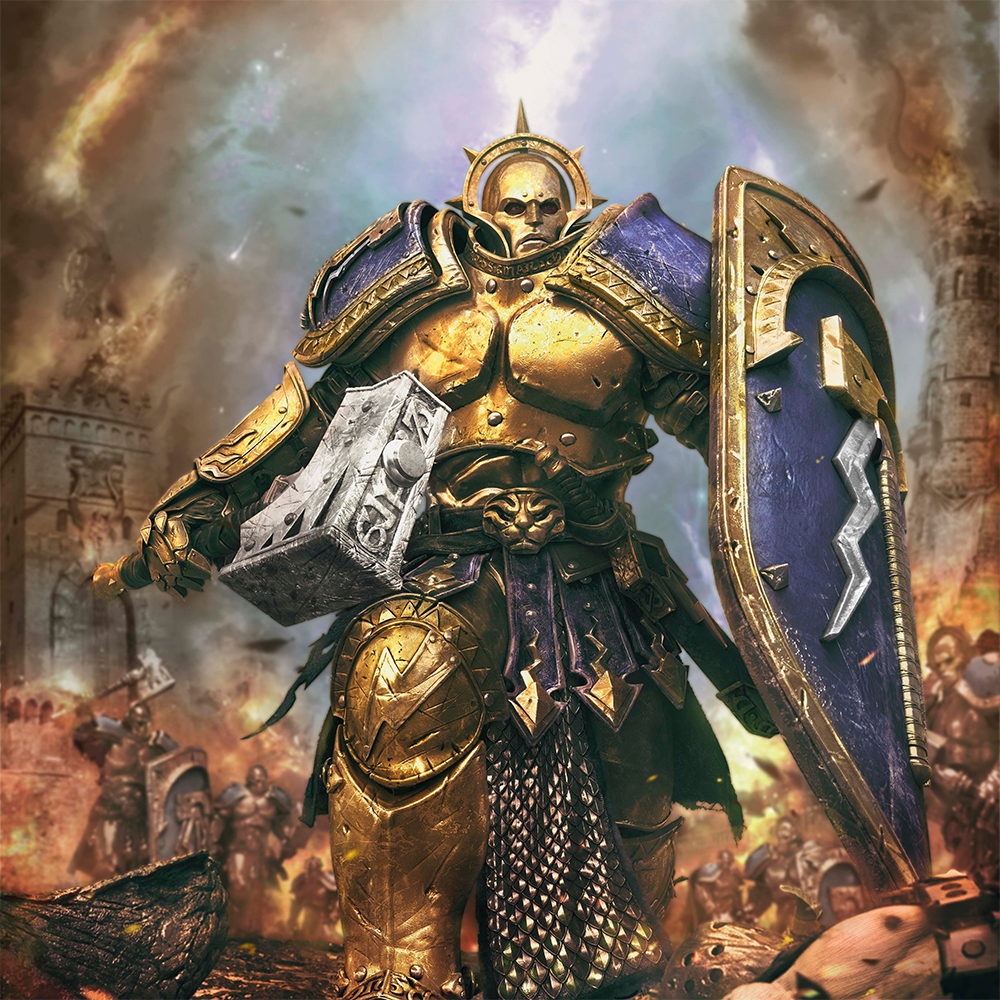 4-1 for the weekend isn’t bad at all! Missed out on Best Order because of the way painting was pointed, but I had a good time and learned a lot.

Skyborne Slayers (or Hammerstrike Force for that matter) is extremely strong even with the point changes due to just how powerful the Alpha Strike is, especially if you can get the double turn. A few of my games turned out to be non-games because of this, which feels a bit bad, but I think they could have been mitigated with more conservative play from my opponents.

All in all, I’m quite happy with the list. I think I might change some of the non-Battalion units around – Longstrikes are very powerful, but they’re also very swing-y since they’re only 1 shot each at the price point of 180 for 3. And since Stormcast don’t have a way to reroll that, it can lead to some disappointing rounds of shooting. It might be better to bump the unit of Decimators up to 10 to get more Starsoul Maces in the list, which are just super strong. I’m also hoping to try out a few new army types in the future, such as a more static shooting force and one with the Stardrake.

Hope you all enjoyed the quick writeup! I’m really having fun with Stormcast and AoS in general right now. If you’ve been thinking about trying the game, now is a great time to try it out! The new GHB is really great and the competitive scene is very exciting and growing.

Posted on October 12, 2017 by Requizen in Age of Sigmar, Battle Report, Tournament report

4 Responses to “Tournament Report: The Stormcasts go to a GT!”