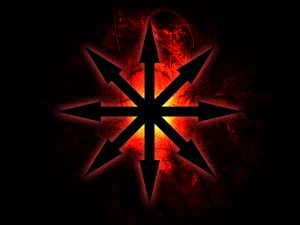 Hey, everyone. Chandler here with a review on everyone’s favorite troops choice you love to hate; Chaos Cultists.  For more reviews, tactics and strategy articles check out the Tactics Corner.

The Chaos Cultist has become a mainstay in Chaos Space Marines armies for a few years now and for good reason.  Traditionally they have been cheap objective campers that your opponent will tend to ignore to focus on more damaging threats.  And while that probably still holds to be mostly true, there are ways to get a lot of mileage out of those Cultists beyond simply sitting in a ruin on an objective (although that is certainly a decent way to use them.)  It all boils down to a few character buffs and some stratagems to take Chaos Cultists from being cowering objective huggers to capable threats on the table top.

Chaos Cultists occupy the Troops slot in a Chaos Space Marines army.  It’s worth noting that when taken in a Chaos Space Marines detachment, i.e. one in which all units share some <Legion> keyword in the detachment, Chaos Cultists gain the Despoilers of the Galaxy special rule.  This rule allows your Cultists to score an objective regardless of the number of models within 3″ that your opponent has, unless he too has a similar special rule.

Additionally they come with the <Legion> keyword allowing you to bring them in any of the Legions covered in the codex, as well as the <Mark of Chaos> keyword which allows you to dedicate them to one of the Chaos gods. Sadly, this unit’s morale is terrible though, coming in at Leadership 6 with their Champion. There are a few ways to mitigate that awful leadership, which I will touch upon later in the article. The unit can be taken in groups ranging from 10-40 models providing excellent screen potential as well.  They have a BS and WS of 4+ making them average shooters and assault units. 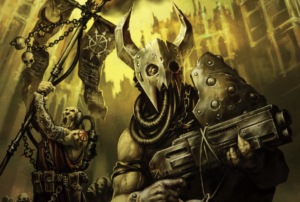 Chaos Cultists come armed with the standard autogun, which is a Rapid Fire 1 weapon with 24″ range, STR 3 AP 0 and 1 Damage.  Not exactly a weapon to strike fear in the heart of your opponent. That said, getting a blob of 30-40 of these guys within 12″ of your opponent, along with a re-roll aura can be pretty deadly.  Instead of going for the autogun you can give them an autopistol and a brutal assault weapon.  The brutal assault weapon, only user STR 3 AP 0 and 1 Damage isn’t that scary, but it’s abilities let you make 1 extra attack with it.  So suddenly Cultists get 2 attacks and 3 on the Champion. Combined with some Stratagems and Re-roll auras they can lay down some good damage for their points. Sadly their save is awful coming in at a 6+, which being only Toughness 3, makes them fairly easy to kill.

Chaos Cultists on their own are not that scary of a unit in truth. There are various ways to use them in 8th edition and get a lot out of them with some Legion Traits, character buffs and stratagems, however.  Let’s take the good old Black Legion for starters.  Just by being Black Legion, the Cultists get a nice +1 leadership bump which can come in handy on those morale tests.  With Abaddon nearby you are safe to bring massive  blobs of them as well, as they can auto pass morale tests within his aura which is huge! That makes this unit go from just meh to something your opponent now has to plan for.  A blob of 40 cultists with autoguns, who autopass morale, and can advance and shoot up to 40 shots is pretty impressive.  With Abaddon nearby the unit is hitting on 5s (or 4s if they didn’t advance) re-rolling 1-3s to hit.  You can also throw down the Veterans of the Long War stratagem to allow them to add 1 to their wound rolls in shooting or the fight phase.  Suddenly the unit is cranking out between 40-80 shots, re-rolling to hit and wounding most infantry units on 4+. 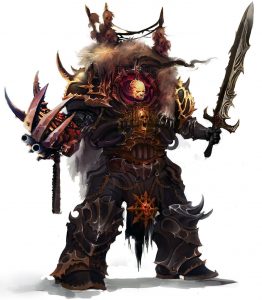 Another trick is to use Fabius Bile to enhance one of these units. You’re looking at giving the unit +1 STR or Toughness or Attack, all solid options for a giant Cultist blob. Start advancing this unit to put pressure on the opponent to deal with them. Once the unit is whittled down, after auto-passing your morale test, on your next turn throw out 2 Command Points for Tide of Traitors.  Pull the Cultists, now buffed by Bile’s rule for the entire game, return them back to starting unit strength, and come in off a battlefield edge in your opponent’s zone to threaten him. 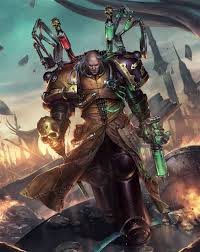 If you can get these guys engaged in combat at full strength they can potentially wipe many units out. 80 attacks, re-rolling with a buff character nearby of if you’re Black Legion using the Let the Galaxy Burn stratagem, throw on Veterans of the Long War, as mentioned above, and add 1 to the wound rolls. Suddenly things start to go down fast.  Having a deep striking Sorcerer come in to cast Prescience on them is another great tactic to buff them.  Even better if you are World Eaters with Mark of Khorne! Then you could potentially sling 120 attacks on the charge after using Tide of Traitors.

Aside from using these sorts of tactics, Cultists also make good screen units for things such as Smite spam or to deny deep strikers in your deployment zone.  Take a blob of 30-40 and line them around your deployment zone for area denial.  This is an even better tactic when you run Alpha Legion and use Forward Operatives, especially if your plan is to go second. Suddenly you can have a string of cultists for area denial all over the mid-field.  They can make an excellent speed bump unit to allow your heavy hitters like Demon Princes and Berzerkers to get a charge off.

Then again there is the tried and true method of letting Cultists cling onto backfield objectives. It has always been an effective strategy, but there is so much more you can do with them now.

While there are lots of great ways to use Chaos Cultists now, they do have some drawbacks. For starters, their leadership, as mentioned above, is terrible. That means without spending Command Points or Abaddon nearby, they can most assuredly be wiped out in one turn due to morale.  They also hit on a 4+ which, while not terrible of course, can really hurt if you’re facing an enemy with a -1 to hit buff on them.  They have the potential to do lots of damage if utilized properly,  but often that comes in the form of buffs and using lots of stratagems to support them. Stratagems you might find to be more useful on units such as Khorne Berzerkers, for example.  That said, Tide of Traitors is well worth holding off those extra command points to use, if for nothing more than late game objective grabbing.