Always a cool looking regiment, it is great to see the Valhallans getting some love. This regiment is known for being very dour and merciless in the face of their enemies. They rules that reflect that quite well I think 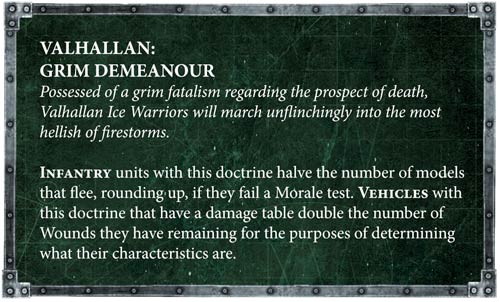 So this may not seem as flashy as some of the other doctrines like Catachan, for example, but it is really good in an army that builds to take advantage of it. Like the other regiments, part of it affects infantry, the other vehicles. The infantry part halves the number of models that run away from a failed morale check. This is awesome as Astra Militarum leadership tends to not be very good. It also means units of Conscripts suffer less casualties if the Commissar gets killed or you can run basic infantry squads around the table without worrying too much about morale support. The vehicle boost is awesome as it allows you to ignore your degrading profile until the vehicle is damn near dead. A Leman Russ, for example, would be at full efficacy until it had only 4 wounds remaining and would then not degrade again until it was down to a single wound!

Their unique order likewise, reflects that stern demeanor. It allows you to shoot at enemy units within 1″ of friendly units but on a roll of a 1 to hit, you hit a friendly model. Obviously you want to try and have a reroll 1 aura effecting this unit to offset that with a model like Commissar Yarrick. But, this is very powerful as it allows you to absorb a charge with a unit like Conscripts and then blast the enemy unit even if you are unable to withdraw from combat with the Conscripts such as if they get pinned in combat. 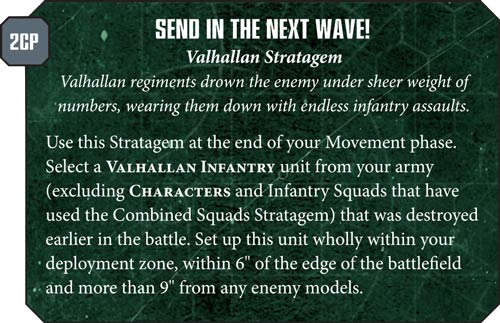 This unique Stratagem reflects that strategy quite well as if you do lose your Conscripts (or other infantry unit), you can bring them back for 2 CP. This can be an awesome and tricky tactic to use, playing a unit very aggressively and then when they die, recycle them on to a back objective.

What do you all think of the Valhallans? Cannot wait for this awesome new codex which will be available for pre-order this Saturday, September 30th!

← More Awesome Commissions from the FLG Paint Studio!
Last Chance to Save! →