A Beginner’s Guide to Minions: Gatormen

You are here: Home › Tactics › Warmachine › A Beginner’s Guide to Minions: Gatormen

In a World where Necromantic Anthropomorphic Alligators rule the swamps and the dark soggy suck holes in the wilderness, the search for prey commences in pursuit of Godhood for the leader of their Gestalt Cult. If this sounds cool, WELCOME TO MINIONS, COME ON IN! Check the Tactics Corner for more great articles!

Hey guys, BigVik here, and this time we’re talking about Minions, the faction of factions! We’ll be concentrating on Gators first and moving onto Pigs next time! 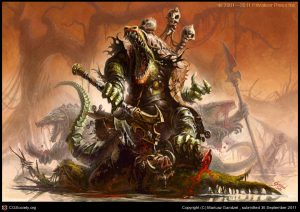 From Blindwater Lake, the Fenn Marsh, and the Marchfells come the gatormen and bog trogs. Gatormen are anthropomorphic alligators, taller than a man, and far more fierce. When these warriors are brought to bear they fight with a ferocity few can match within Western Immoren. Whereas the gatormen are large and fierce, bog trogs are small guileful fighters adept at ambush, and guerilla warfare. 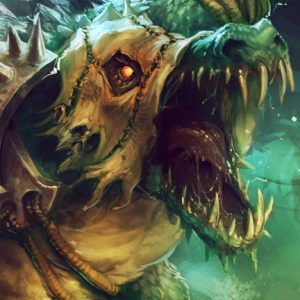 The Blindwater Congregation is a growing cult of gatormen and bog trogs. Led by Bloody Barnabas, this cult was created to deliver the tide of bloodshed their master needs to enable his ascension to godhood. Using the power of bokors bound to his cause, Barnabas has enslaved all the bog trogs of Blindwater Lake, the Fenn Marsh, and the Marchfells. 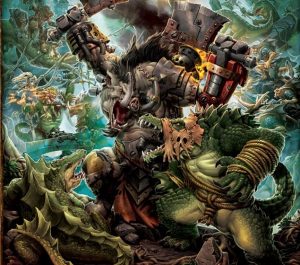 The Blindwater Congregation, is a great example of a simple, but brutal playstyle, able shove around 20 Gatormen Posse down your opponent’s throat and see if they choke. With a combination of access to the feralgeist, a cheap incorporeal scenario denial piece, and the aforementioned Posse unit Blindwater Congregation definitely has the ability to project a ton of threat on the table. In Theme, Gatormen Posse gets an extra 3 boxes, snacking (keep in mind they have 2” reach and unyielding, making it hard to remove these guys), and a 12” unsupported threat range against living models, with an extra 2” of deployment to make sure that you can get up the table that much faster. This doesn’t even cover the Warlocks! 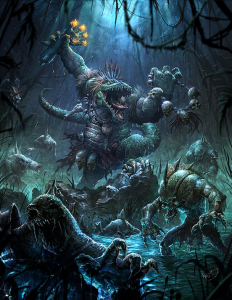 We’ll be concentrating our attention on two warlocks that show opposing aspects of the Blindwater Congregation. Jaga Jaga is a witch doctor who has some very cool control elements, while Rask is ranged game caster who shoves his army right down his opponent’s throat with minimal losses on deliver. 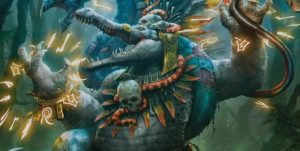 First ‘Lock up is Jaga Jaga, She has a giant serpent for a weapon, and gives death rage to her battle group, meaning when they get disabled they can make a 3” move, attack, then get removed from play. Her spell list includes Battle Host, Deadweight, Ghost Walk, Grave Wind, and Spell Piercer. Battle Host is an armor buff to Jaga when she’s close to one of her beasts, along with a movement boost to her battlegroup, Deadweight is a minor nuke where if it destroys an enemy living or undead model, an enemy model of your choice within 2” must forfeit either movement or combat action during its next activation, this is one of the better control spells in the entire game. Grave Wind gives a def buff and poltergeist to one model, making the model harder to hit, and if the model is missed, by an attack the attacker can be pushed d3” directly away from the model with poltergeist, this is another one of those control-ish kind of effects, which can really screw with your opponent’s plans. Spell Piercer is one of those spells that doesn’t do too much in every game, but every once in awhile it single handedly wins it for you, all friendly faction models in her control area gain magical and blessed on their guns, this means you ignore many “don’t shoot me” abilities, as well as all spell and animus based buffs to def and arm on your opponent’s models. Again, situationally brilliant.

Her feat is a bit of an essay, but if an enemy living or undead model is boxed, she takes control of it instead, gains dark shroud, and advances 3” ignoring free strikes. At the end of the round the feat expires. There are two ways to use this to my understanding, you can use models you kill to block charge lanes, and you can debuff enemy armor using your initial wave. The great thing about this is, you don’t have to choose, why not set up debuff bubbles that completely remove your opponent’s ability to properly respond to you moving in on them? I’ve seen it work, though it seems to take a lot of practice to perfect, definitely worth it in my opinion! 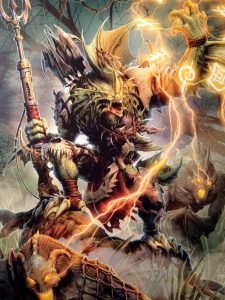 Next let’s look at Rask, he was and still is (in my opinion) still a powerhouse. His stat line isn’t particularly powerful with his very average defensive values. His primary weapon, a trident cannon, is a rat 7, range 10, pow 12 magical gun that has 3 shot types, arcane interference, energy siphon, and paralysis. Arcane interference removes upkeep, animi, focus points, and causes disruption to warjacks, Energy siphon take a focus or fury from the target and puts it on Rask, and Paralysis which debuffs movement and defense heavily.

His spell list is quite encompassing for a warlock, since they typically require the animi of warbeasts in their battlegroup to fill out their capabilities. He has admonition, boundless charge, fury, and veil of mists. Admonition makes it VERY difficult for your opponent to remove whatever it is you put admonition on, since they get to just walk away when you get to close. Boundless charge is a great threat extension, pathfinder handout, and fury management tool all in one. Fury heavily buffs melee damage for a debuff in def, and veil of mists creates a cloud that doesn’t block your models’ line of sight and does block LOS to your opponent.

His feat feat gives his army super stealth for a turn, where friendly faction models on his control range are untargetable by charges, slams, and ranged attacks for one round.

Now let’s put this all together. Rask has a threat extender for his beasts, which with proper support are delivering multiple pow 20+ hits to the face at 12” threat, along with his gator mob to back them up. If you out threat him, TOO BAD! He feats and makes you unable to charge his line, worst case scenario your opponent has to run in and jam, and Rask’s typical build is A-Okay with that. 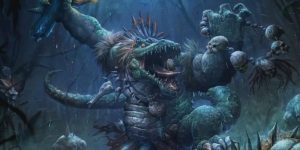 In sum, Gatormen are a great sub-faction which can definitely function on their own two feet. They have great threats that give your opponent pause, control elements to mess with your opponent’s game, and delivery mechanisms that most other factions would drool at the idea of getting. These guys are definitely more than a nice pair of boots!

Come back next time for the other half of Minions, Pigs!!

← Tactical Terrain: Ruins in Newhammer
Ninth Realm Ep.50 What do we want to see in the Generals Handbook 2017? →