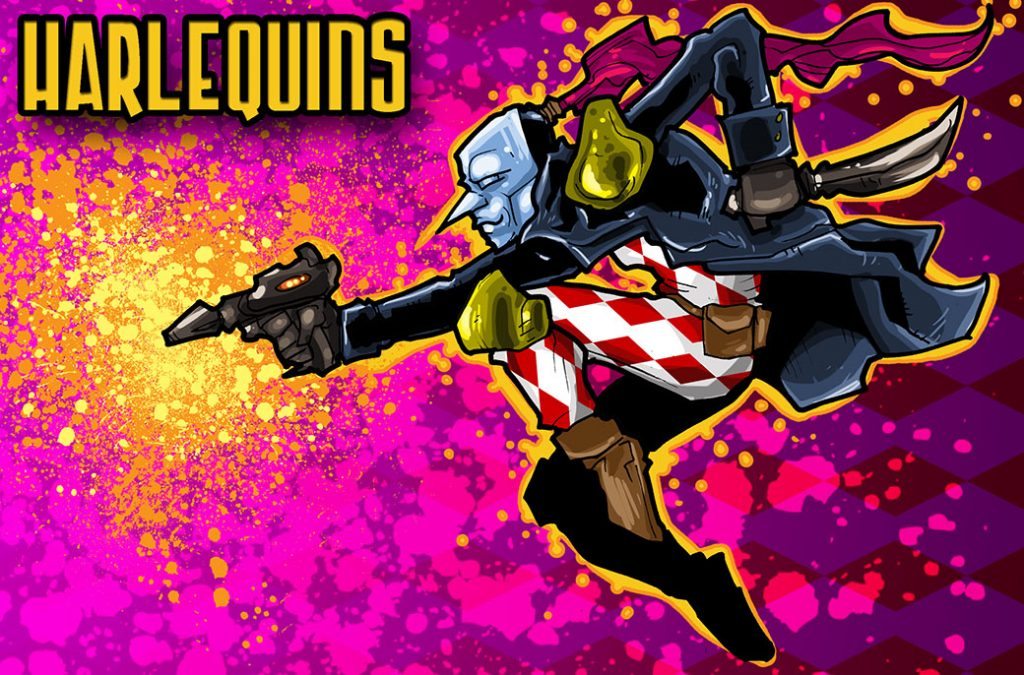 As the new 8th edition of Warhammer 40,000 was released, the Xenos race of the Eldar Craftworlds, Dark Eldar, and Harlequins were revamped with a new rule set. A wanna-be Harlequin player from my introduction to 40k, I finally set my scatter laser embezzled jet bikes in a box, and pulled out my Troupes. The Masque of the Winter Sun was finally here, and they were ready!

Word on the wind of a local two day tournament not long after the anticipated 8th edition release spread, and my Harlequins were determined to be part of the war and chaos.

The tournament was filled with races from every corner of the galaxy–Orks in pirate hats rode a huge Stompa, flooding gameboards with their green skin as their opponents’ models were wiped from the table. A community of Riptides rained Hailfire, and the whispers of a Tesseract Vault lingered in the corners of the room, next to an ominous shape in the far corner.

While Asuryani were surprisingly absent from the grand tournament, Drukhari and Ynarri were not. The siblings of my Harlequins fared well, and everyone heard of the horrific tales of the soul bursting Ynarri.

While the Ynarri and Drukhari had established themselves a fearsome reputation as games passed in a colorful blur, the Harlequins from the Masque of the Winter Sun were beginning to melt.

Starweavers exploded, the Mirage Launchers finally falling short. Tesla ripped through Players as they charged through the battlefield, the holo-suit failing to save. A Solitaire blitzed, only to come a few inches too short from charging their adversary.

Loss after loss came at a high price, and the Harlequins began to lose the shimmer of hope and anticipation their leader had cast upon them. But with loss, came lessons, and not every game was tossed.

The speed of the Harlequins were incredible–they danced across the battlefield epicly, leaving their opponents’ mouth ajar in surprise as they began a first turn charge. Their low toughness gave opponents many reason to scoff, until the Shadowseer used her Shield from Harm. The Troupe Master chuckled, as a Choreographer of War he made sure all Troupes within his aura had a second chance to wound.

The thespians played their Mirror of Minds, as a C’tan Shard of the Nightbringer fell from the battlefield. Shuriken fired from Starweavers and their occupants inside, ending the bloody reign of the Bloodthirster before the battle could begin. Starweavers charged with their occupants at their side, taking the pre-charge wounds. 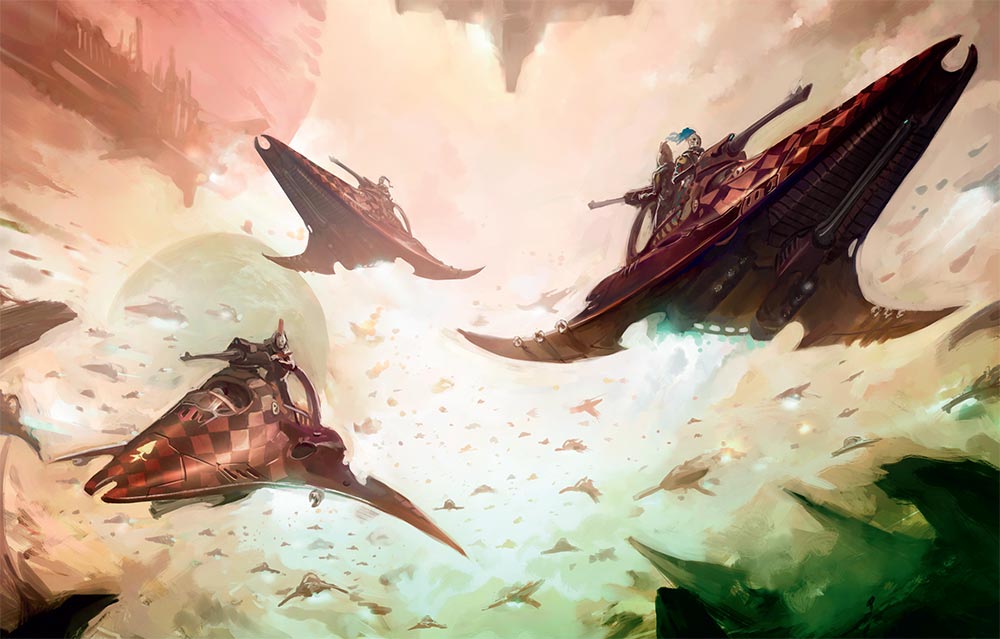 It was not always an easy battle, many a times the Harlequins were outnumbered on the battlefield. Neither were they always first to move, and sometimes damage was done before the battle had begun. However, Mirage Launchers saved many a blow, as did the holo-fields and suits worn by the Harlequins.

The most difficult battle of them all was that against the Tyranid. Huge, uncountable numbers of scaly, monstrous Genestealers deepstriked across the map, charging Starweavers before the occupants could disembark, ending their Xenos lives trapped inside a transport. The monsters were so huge in number, they seemed to flood the battlefield. Troupes stayed close together, quickly realizing they could not defeat the bugs alone. But the opponent was always able to change the tide of the assault, attacking after taking the blows from a single Troupe.

Conclusively, while the Masque of the Winter Sun had not been able to declare victory as many times as they had dreamed, they were more successful than they had been in previous editions. Gone were the standard move rates, instead Players race across the battlefield, running and charging. The Shadowseer still commands reign of her psychic powers, protecting nearby units or telepathically attacking those nearby. Troupe Masters buff nearby units, and the Solitaire can blitz without penalty. Starweavers and Voidweavers are hardy vehicles, filled with tricks to increase their survivability. However, after attempting to use Harlequins as the only Aeldari Xenos on the field, I would find it wise and easy to argue Harlequins still benefit from additional Aeldari units on the field. The wide variety of options available is part of the benefit to being an Aeldari player, and for an army as melee-centric as Harlequins, heavy shooting is a must. While the Battle Brothers Alliance table no longer exists, 8th edition has made allying in Aeldari units simple and beneficial. The updated Harlequin rules are more competitive, bringing them to the similar level of power as other races.

View all posts by Revan →

3 Responses to “8th Edition Tournament: The Resurgence of Aeldari Harlequins”