Yesterday, we looked at the biggest models in Warhammer 40,000, and how devastating they can be.

Today, we’re going to look at the little guys.

The new Warhammer 40,000 will give infantry a chance to shine. There is stuff you just can’t do very well with vehicles, bikes and walkers, like hold ruins, use cover effectively and swarm the battlefield in numbers to claim every objective. 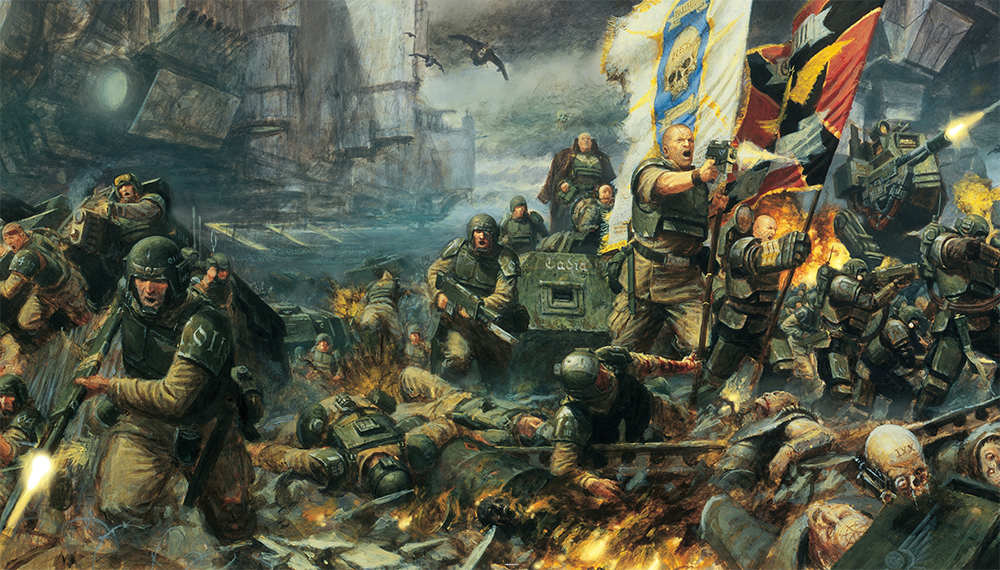 One thing that is certainly going to help infantry out is the fact that everything can harm everything in the game. We’ve heard already that characteristics don’t cap at 10 anymore, so the old 10×10 strength vs toughness table was in for an update. In the new edition, there’s a simple but elegant system to find out what you need to wound:

So, you can see that while even the humble lasgun has a chance to take down the biggest foe, you’ll need a lot of small-arms fire to really threaten the big stuff. We’ve already seen the profiles of a Space Marine, a bolter, a lascannon and a Gorkanaut, and now we know all the steps to work out just how such a Shooting phase might go. Some quick maths tells us that we’d need over 500 bolters firing at that Gorkanaut to bring it down, whereas you’d need just over a dozen lascannons. So, while you might occasionally chip the odd wound off with bolters, lasguns or shootas, you might find that your standard infantry guns are better used elsewhere.

Not a problem though, because in the new Warhammer 40,000, models in a squad can fire at different targets. So, this means your Tactical Squad can have your boys with bolters deal with that onrushing Hormagaunt horde, while the flamer bathes a nearby Lictor in prometheum fire, and the squad’s krak missile takes an opportunistic potshot at that onrushing Carnifex – just as you always imagined they should!

Infantry is going to have a lot to offer a cunning general in this edition.

Tomorrow, we’ll take a look at how characters work, join us then.

← Chaos in NewHammer from Frankie!
Signals from the Frontline #530: NewHammer 40k Infantry and Large Model Rules! →