Battle-forged armies will be familiar to Warhammer 40,000 players today – it basically means that all the models in your army are part of a Detachment or Formation.

That is still largely true in the new Warhammer 40,000, but with a few changes.

The biggest of which is… wait for it…<puff of smoke>

If your army is built using Formations right now, you’re going to be fine. In their place are a dozen new game-wide Detachments that are available to all factions. These are flexible enough that all of your current forces can be fit into them to form a Battle-forged army. The advantage of these is that all factions now have an even playing field of list building mechanics, rather than some having loads and some having to stick with the trusty Combined Arms option for every game.

These detachments are made up of a combination of 9 unit types, which will look very familiar to anyone who has played Warhammer 40,000 in the past two decades. Some you’ll recognise from Space Marines company markings and the classic Combined Arms detachment of today, plus Lords of War, Fortifications and the new one – Flyers, now with their own slot. 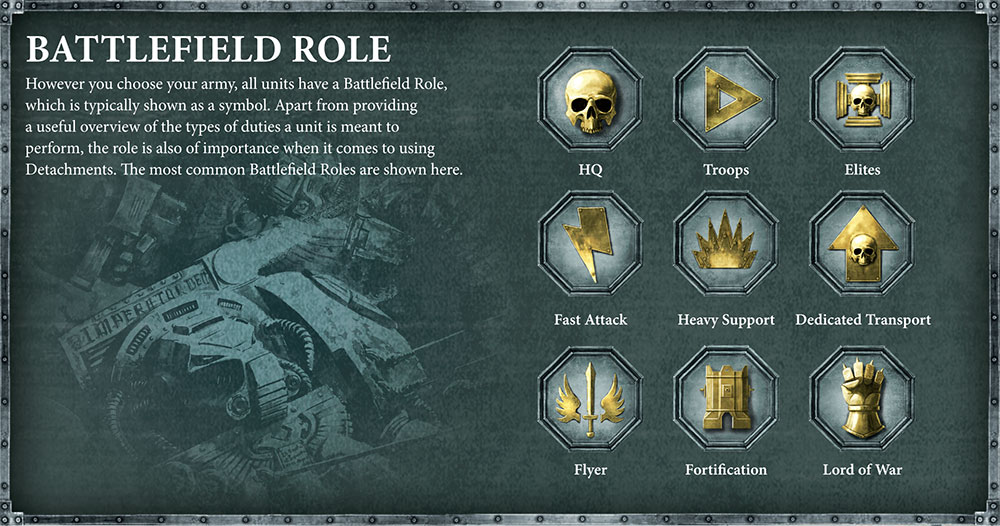 These Detachments come with a few benefits and restrictions. The most common restriction is that all units in a single Detachment must share a faction keyword (Tyranid, Blood Angels or Imperium for example). The most common bonus is that, depending on how optimised your army is for the logistics of war, you’ll get Command Points to spend. We’ll cover exactly what these can do for you soon, but trust us when we say they are incredibly useful if used wisely, and you generally get more of them if your army is a well rounded and balanced force.

Here are a few examples: 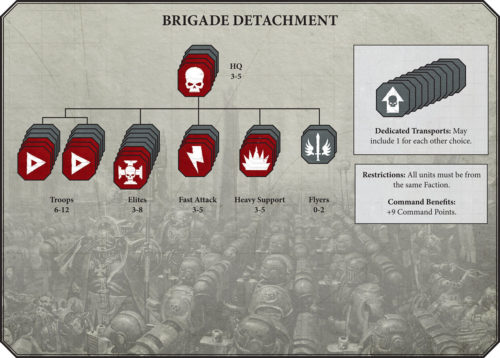 These are just a taste of the options available.

Battle-forged armies can be used with or without points, and we fully expect gamers playing matched or narrative play games to use these in most situations as they tend to create effective armies on the tabletop that also fit the background and lore of the setting. Matched play actually has a few extra rules too, designed for competitive events, which organisers can choose to use when setting the rules for Battle-forged armies – limits on the number of separate Detachments is one example.

We’ll be back again tomorrow with more news from the new Warhammer 40,000.

What do you all think about this bit of news?