It’s… it’s an airplane! One that definitely exists and has rules and isn’t quite as bad as some other units in the game! Huzzah for the Razorshark, a unit that some people remember exists! Click to read on, or check out the Tactics Corner for reviews and strategies for units that are probably quite a bit better. 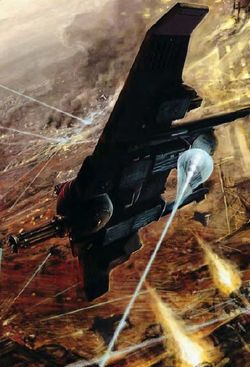 The Tau codex does not have a fighter airplane.

This isn’t a particularly unusual statement in and of itself; part of the awkwardness of the Death from the Skies supplement and its division of aircraft into various roles is that there are only one to three airframes in any given codex to start with, which leaves most of them woefully short in terms of covering their bases even in the theoretical sense. But it stands out as a particularly glaring flaw for the Tau, who it is explained in their very own codex espouse a doctrine of air superiority on the battlefield in order to allow uncontested projection of firepower from above. It is thus truly bizarre that the Tau not only lack a Fighter by the definition of the DftS book, but don’t even have an airplane that can even shoot down enemy flyers with any degree of proficiency. They don’t lack for AA of course, as the Velocity Tracker upgrade gives them abundant access to tools against flying targets, but the lack still seems very odd in context.

When it was first released the Razorshark was pushed as a nominal fighter aircraft- or more accurately a “strike fighter” capable of both interception and ground-attack duties, but the 7E version of the book retconned this into an exclusive ground-attack role. Since ground-attack and bombing are all but indistinguishable within the context of 40K this seems like a pretty silly choice, but we shrug our shoulders and move on. The Razorshark follows almost exactly in the footsteps of the AX39 Sun Shark Bomber- or, to be more accurate, the former follows the latter, as their designation numbers make obvious- “AX39” indicates that the Sun Shark is a variant of the AX3 chassis. However you look at it, the two airplanes have identical statlines- AV11/10/10 means that the Razorshark is surprisingly fragile, with even Boltguns being able to tick off damage from it now and again. 3HP does at least mean it has a reasonable lifespan in that respect, but considering how easy it is to damage you are going to have to spend a lot of your time Jinking. Unlike the Tau ground vehicles, the aircraft have only BS3- not a big issue for blast weapons, but it makes any solid-shot guns significantly less effective. At 145pts base, it’s definitely not particularly cheap compared to other flyers in its class like the Stormtalon or Dakkajet. 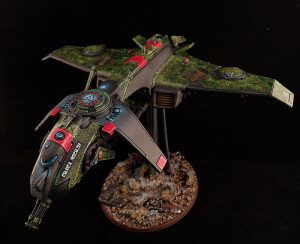 The Razorshark’s comes with a decent array of guns, though it often struggles to make use of them; a Burst Cannon in the chin is of rather questionable utility most of the time and should always be upgraded to the Missile Pod for 5pts. (Note that unlike the Sun Shark, this weapon is not twin-linked, which is problematic with BS3.) The two Seeker Missiles on the wings are a nice touch, but since they will often be a mismatch for your target profile I haven’t found them to be particularly clutch in most situations- they’re reasonable if you’re going to be shooting at vehicles or MCs, however.

The main armament of the vehicle is the Quad Ion turret mounted to the rear of the vehicle; the unusual location and articulation mean that it will occasionally struggle to target units dead ahead of you, but does have the advantage of a full 360 arc when strafing ground targets (though the other weapons on the chassis won’t always be able to follow suit.) As virtually all Tau Ion weapons, the gun has two profiles: normal mode is four S7 AP4 shots, and overcharged mode is a S8 AP4 large blast with Gets Hot. That the Razorshark is more expensive than a Hammerhead but lacks the benefit of AP3 on its weapon is a significant strike against it; the gun feels a tad lackluster overall, though it can do a decent job when firing into clustered infantry.

The Razorshark is able to pick off the Vehicle Battle Systems list and probably should; the Decoy Launchers upgrade is practically a must-take at 3pts, as it gives you a 4++ save against any weapon with the Interceptor rule (even when not being fired on Intercept mode.) Since this covers virtually everything in the game with Skyfire and is extremely cheap, you should probably invest into it every time. Alternatively, the Disruption Pod is 15pts and adds a flat +1 to cover saves, which is extremely handy when you decide to Jink- however, it’s definitely not cheap and you’d really rather not be Jinking too often. The Automated Repair System is often a bit marginal at 5pts, but the chance to get back your main weapon after it’s destroyed is a pretty useful possibility, so it’s worth thinking about if you have a bit left at the end of a list. 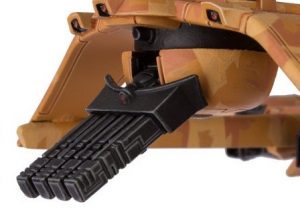 Well, honestly? Not a lot. Especially with the release of the Barracuda AX-5-2 variant there are simply better airplanes out there for the ground-attack role, and though the Razorshark is probably better off than its bomber cousin (since bombers are always awful), it’s just not very good at what it does. Tau have too many other good ways to do what it does- the Hammerhead is a cheaper blast template, the Riptide is mobile enough and much more survivable, Broadsides are better at putting weight of S7 shots onto targets, etc.

The Razorshark isn’t completely without advantages, of course; its immunity to assaults is a nice bonus for any Tau army and the ability to maneuver into enemy rear armor with a turret weapon makes it quite easy to put damage on vehicles. But with its lackluster accuracy the chances of destroying a vehicle in one go aren’t very high, even in this ideal case, and more often it will simply circle the battlefield throwing shots into the side armor of stuff and plinking away at infantry.  If you happen to be facing anything with 4+ or worse armor out in the open, this can do some non-trivial damage when your gun works right and doesn’t catch on fire and everything, but that is a fairly niche situation in the overall scheme of things.

A Razorshark will work best in situations where you can take decent advantage of both of its main features: being able to put out a good number of S7 shots and also have a pie plate available for later. Against a mechanized Ork army or the like it can do reasonably well, breaking open their light transports and then hammering the contents with FNP- and armor-denying blasts to follow. It can also do alright versus IG, Tau, and Eldar armies that don’t feature enough AA to punish it and have enough ground troops (that aren’t jetbikes/battlesuits) for it to hunt aggressively- but these are not armies you will often see a lot in casual play, much less at tournaments. 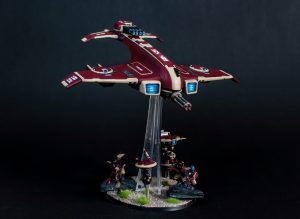 The Razorshark is available in a surprising number of formations, given how recent an introduction it is to the canon and how unpopular the unit is in general. It can be taken as part of a Hunter Contingent as a “Fast Attack” choice; the +1 Ballistic Skill bonus for Coordinated Firepower is quite useful here, solving many of the problems with the chassis even if it doesn’t make it an exceptional choice. It is also available as an auxiliary choice in the form of the Air Caste Support Cadre, which requires two Razorsharks and a Sun Shark. The formation allows them to ignore Stunned/Shaken and repair any HP taken on a 6+ each turn, but the high investment makes it not all that attractive overall.

The most useful of its options, however, is the Air Superiority Cadre, which is an auxiliary choice for the Dawn Blade Cadre. Requiring three Razorsharks, it gives all models +1BS when shooting at enemy flying targets (including skimmers and jetbikes), which is pretty handy. But it gets better- so long as you have one model from the formation present on the field, you can place d3 Markerlight counters on any enemy unit(s) at the start of your shooting phase. These automatic counters on any unit are insanely valuable; they can let the Razorsharks shoot down enemy aircraft, of course, but they can be used for any number of other things as well and there isn’t a Tau army in the world that doesn’t want some more Markerlights. Finally, the formation passes its reserve roll automatically if there are any of the aforementioned flying targets on the field, which can solve the common issue of everything simply sitting off-table the whole game.

We’re getting down into the dregs of the codex at this point, ladies and gentlemen- the AX3 can’t come even close to competing for worst unit in the game, but it’s certainly no prize and you won’t often see one on the battlefield. Not only is it a lackluster unit on the tabletop, it’s also cursed with a model that many players consider pretty uninspiring or even outright ugly, which doesn’t leave a lot of reasons to own one. With the various Forge World flyers being so blatantly superior in so many respects, the Razorshark is relegated to the backest of the back shelves in terms of usefulness and appeal in virtually every way.

Remember, you can order GW product for up to 25% off from the Frontline Store if you’re looking to expand an existing army or start a new one.