A Beginner’s Guide to Trollbloods

You are here: Home › Hordes › Tactics › A Beginner’s Guide to Trollbloods

Do you like WarmaHordes, but you feel its not full enough of drunken soccer hooligans? Me too! Welcome to Trollbloods! Check the Tactics Corner for more great articles!

Hey Guys, I’m back to the faction overviews, and this week we’re looking at Trollbloods. A faction full of tough as nails clans of trollkin, with armies full of troll Warbeasts capable of controlling the elements, to powerful shamans, to Kriel champions, and lethal bards called Fell Callers! 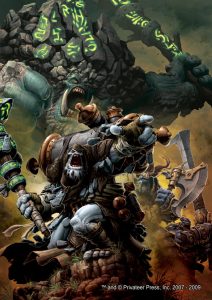 The trollkin in Hordes are a mix of Scottish and Native American themes. Historically the Trollblood clans, called Kriels by trollkin themselves, have not traditionally been unified. This has changed since Madrak Ironhide and Hoarluk Doomshaper have sought to unite these disparate Kriels against the larger nations of Immoren which had up until this point in their history been marginalized and generally abused by the ‘civilized’ people. Since then it has not exactly been smooth sailing, as during and after the events of Devastation, afterwhich Madrak decided that it would be best for the United Kriels to leave their ancestral homeland and make for a more isolated land to try to call their own.

The themes explored in Trollbloods can be very diverse. With each kriel comes a potentially completely different culture, and the trollkin bring all of them to the party! From grim Dhunian shamans who draw power from the god, Dhunia, manifesting as a mix of cold and protective themed powers, to other units which are essentially drunk Scottish soccer hooligans.

Trolls play what I like to call an “honest” game. In general they don’t take your toys away, but they take the best you’ve got right on the chin, and hit back even harder. Though they aren’t as tricky as some other factions, with exceptions of course, trollkin will generally present some kind of hard but to crack, and if the opponent fails to do so fast enough, they’ll be hurting in the morning.

Trollkin warlocks are generally either offensive or defensive. 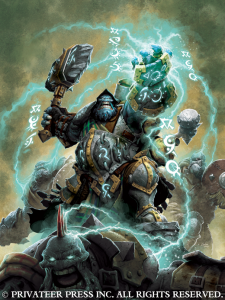 Now let’s start the break down, trollkin warlocks, as discussed above, are not as tricksy as other warlocks, and as of such many are proportionately harder to kill, or hit that much harder to ensure your opponent stays down. 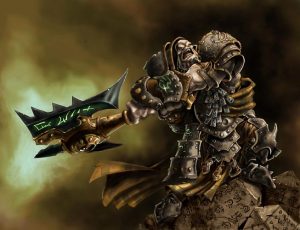 The first Warlock we’ll be looking at is none other than Madrak Ironhide, World Ender, or Madrak 2. He’s got good physical and defensive stats with a low Fury stat, and a high pow axe called, Rathrok, which he can throw if need be, and has Grievous Wounds which removes tough and disallows damage removal, very powerful in certain circumstances.He has Field Marshal Relentless Charge, which gives his battlegroup pathfinder when they charge. The Money maker on this guy’s card is Grim Salvation, if Madrak is hit by a basic attack by an enemy model (keep in mind this doesn’t stipulate non magical, or ranged) you choose a warrior model close to Madrak to be hit directly instead. No limit to number of times, and the target can be knocked down, stationary, or whatever. This ability alone makes Madrak one of the hardest Warlocks to kill in the game! His spell list is pretty short due to his low Fury stat, but his Feat is crazy! Its pretty simple, all friendly non-warlock Faction models in Madrak’s control range gain Berserk and Overtake. This is a really good feat, as it allows Warbeasts, and solos in Madrak’s army to ‘surf’ through your opponent’s army and really take down a large number of models in one turn.

Now, keep in mind this was nerfed in the January Errata, which took Madrak out of his own feat, due to his ability to kill his opponent’s army, gather Fury, and then ‘surf’ over to your opponent’s Warcaster and kill them without a sweat. Granted that can’t happen anymore, but now his armies will be structured to have several models use the feat, not just Madrak, so look out for that. 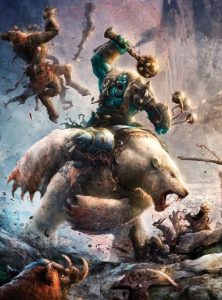 Next we look at Borka, Vengeance of the Rimeshaws. Just to get this out of the way first, he’s riding a friggin’ polar bear! He has high speed, good defensive stats, throws bombs and has a giant maul called Trauma. He give immunity cold to his battle group, and he has a spell that gives his battle group counter charge, more on that later, a cold spray that can crit stationary targets, and an upkeep to give concealment and immunity cold to a model/unit. Finally his feat gives all models in his control area stealth, and finally if an enemy model without immunity cold hits a friendly model with immunity cold while in Borka’s control area, the attacking model becomes stationary after the attack is resolved.

I love this guy, though he doesn’t support a large number of infantry, due to there not being many trollkin solos and units with baked in immunity cold, but he can hand it out to one unit, while he and his battlegroup has it. When you put this all together, you can stop your opponent from killing you with ranged on the turn they would otherwise alpha strike you, and if they try to tarpit you by charging you, your battlegroup can counter charge the models trying to do it and kill a bunch of them on their own turn, very cool! 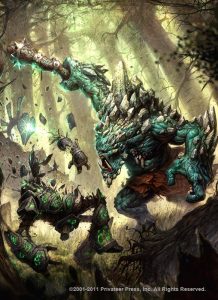 The Warbeasts in Trollbloods are very interesting. They have a variety of elemental trolls, like fire, lightning, earth, etc. Others like the troll axer sport a nice big axe with 2” reach and thresher, making it pretty good at clearing out infantry. The big guys are really cool, most notably Mulg, the Ancient, Doomshaper’s bonded beast, has a very cool animus called Arcane Suppression which increases the cost of spells cast within 10”, and double the cost of upkeeps, and more notably his giant Rune Club wht hits hard as a pile of bricks to the head. 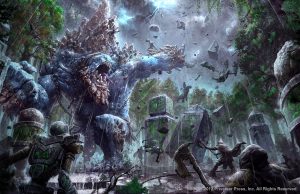 Finally, with regard to Warbeasts, PP has stated that Trollbloods will be the ‘Gargantuan Faction’ meaning that they are the first faction to have a third Gargantuan, and will be getting more in the future, which is very cool! 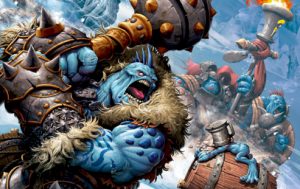 The warrior models in the Trollbloods are an eclectic bunch, made up of all kinds, from the Northkin Fire Eaters, who breathe fire, and get a bunch of bonuses from being on fire, including an armor buff, boosted to hit and damage, and no knockdown, which on a tough model is quite cool. Then there’s the Trollkin Sluggers, essentially a fire team of dudes walking around with maxim machine guns, these guys can pepper up to 15 mid power shots at a threat range of 15”, which can be very scary! Finally there’s the Trollkin Champions, with high mat and mid range pow, these guys are cool, as they’re weapon masters with 2 weapons, and defensive line, which gives a defense bonus against melee attacks, and immunity to knockdown, very good on models with 5 boxes.

The Trollbloods are a very cool faction, with a lots of very tough, very hard hitting models which when properly fielded can become a very hard nut to crack on the table. 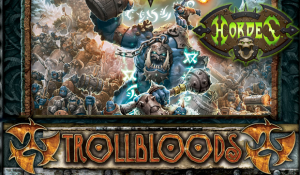 Well that’s it for this article, come back next time for Legion of Everblight, DRAGONS!!!!