Note: Barracuda is not intended to be an infringement upon existing copyrights, including the 1977 hit song by Heart or the oceanic game fish which share its name. Click to read on, or check out the Tactics Corner for more reviews and strategies. 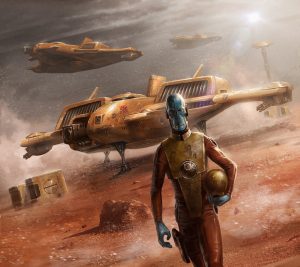 The Barracuda AX-5-2 is nominally a variant of the standard Barracuda air-superiority fighter. However, it actually shares very little in common with its brother- not only is it a different role and armament (which might be expected), it actually has a very different statline and abilities as well; the two are essentially completely different vehicles, with the exception of their actual model.

The AX-5-2’s numbers start off very good, considering how low-ranked most Tau aircraft are; it’s not only got AV11/11/10 but also the full complement of HP3, which is better than its basic version. BS4 is another nice perk for Tau, and Agility/Pursuit 4 are usually irrelevant (since very few tournaments use DftS) but nice when they come up. The Barracuda is a Strike-Fighter, one of the roles that FW made up for no obvious reason, so it essentially has no bonuses/penalties aside from being unable to use the bank turn rule.

Barracudas have the Deep Strike rule (if you want to make a bad choice), as well as Supersonic (for all those times you want to avoid shooting.) More usefully, it has Agile Flyer (giving it +1 to Jink saves) and Strafing Run (for +1 to BS against ground targets), which make it both reasonably survivable and quite fierce on offense combined with its extensive armament. The AX-5-2 is also equipped with a Dispersion Shield, which gives it a 5++ against glances and a 6++ against pens- not amazing, but a nice extra bonus.

At 175pts base, the Barracuda is not a cheap vehicle; however, with the improved statline and weaponry compared to most Tau flyers, it comes out of things looking fairly alright. The AX-5-2 is armed with a plethora of weapons, virtually all of which can be swapped out into other versions (though the usefulness of this varies a bit.) A twin-linked Missile Pod is the only part of the setup that can’t be changed; however, as it’s a good weapon that is at least marginally useful against all targets, there’s really nothing to complain about there.

Apart from that, you get a main gun and two “wing” guns; the main starts off as a Barracuda Heavy Burst Cannon (which should not be confused with the HBC mounted on the Riptide)- six shots at S6 AP4 isn’t tremendous, but it can lay down a pretty good carpet of fire when needed. You can swap it out for free to get a Barracuda Ion Cannon- which, again, is similar but distinct from the regular version. Three S7 AP3 shots (and no ability to overcharge) aren’t terribly exciting overall; it shores up your game against MEQs and AV12 a little bit and really isn’t too different from the Burst overall, so it can be considered a usable option. The last option, the Swiftstrike Railgun, is a standard solid-shot railgun with cut-down range (24″ rather than 72″.) Since it mixes poorly with the type of targets the rest of your guns want to shoot at and you have to pay a 20pt premium to get it, I think the Swiftstrike is largely a trap option unless you are truly desperate for anti-tank.

The wing guns, nominally your secondary armament, end up being shockingly good; all versions of them have the Auto-Targeting rule, which doesn’t actually do much because of Forge World is bad at keeping up with the editions. It stops people from using their Jink save against you, which is decent against other flyers and Ravenwing but won’t typically be a big deal (especially as most of your weapons have weak AP values anyways.) The standard loadout gives you two Long-Barrel Burst Cannons, which are the standard S5 AP5 for the weapon but 36″ range and six shots apiece. This last part is the most impressive, and while you have the ability to swap them (by paying 5pts) into two Cyclic Ion Blasters (S7 AP4 3 shots) there once again little reason to do so unless you REALLY wanna pick on vehicles.

A Barracuda can take up to four Seeker Missiles at 8pts a pop, however these can be a bit tricky to use- it already has four guns as stock, which is the maximum a flyer can shoot at full BS, so you’ll need to be using Markerlights in order to launch them most turns. This isn’t an unreasonable proposition, but it does make taking them on the chassis a lot less attractive than it might otherwise be with a BS4/5 unit, and all the more so since it’s so expensive even without adding them.

Finally, the AX-5-2 can take any of the vehicle battle systems from the standard list, though most of them aren’t all that enticing. The big one, as always, is the Decoy Launchers, which give you a 4++ against any weapon with the Interceptor rule- as this includes most of the actual Skyfire weapons out there (and just about anything on a Tau battlesuit) it’s quite nice to have for only 3pts. Disruption Pods (+1 cover) would normally be very useful on such an expensive vehicle, but they’re actually almost totally redundant on the AX-5-2; the Agile Flyer rule caps its bonus at 3+, so the Pod won’t add anything to a Jink and your natural 6++/5++ against other attacks means that it serves little function there, either. The Automated Repair System isn’t an awful choice if you have 5pts laying around, but it’s not a huge priority either- take if if you feel you can afford to. 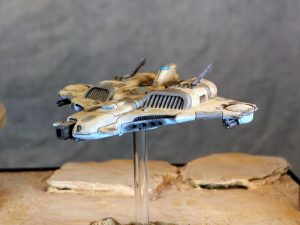 So what is the Barracuda good for? Well, that’s not too hard to puzzle out- in its standard configuration, it gets twenty S5+ shots with BS5 against ground targets. So you fly in, and you deliver the dakka to light and medium infantry units (or light vehicles.) Its status as an airplane makes it reasonably resilient to enemy firepower while its own guns let it simply torrent down most types of targets relatively easily, within the limitations of its firing/turning arcs of course.

With very little need for Markerlight support and the ability to give most enemy flyers/FMCs pause about whether they want to let it get a shooting phase off against them, the Barracuda can be a pretty excellent independent unit- it can fly around solving problems the rest of your army can’t hurt or can’t reach. Against anything short of 2+ saves (or T6+), a Barracuda AX-5-2 will quickly scour its targets from the table pretty easily- it will kill most of a combat squad in a turn and against anything with a 4+ or worse save its numbers ramp up quite quickly (killing, for example, nine 4+ models in one go.)

The biggest challenge for the Barracuda is actually the easiest one to miss: it’s only available as a Heavy Support unit, not in any formations. Although many Tau lists make good use of a Combined Arms (thanks to the Stormsurge, Tetras, etc) there are certainly many out there that don’t want to be investing into one, and in that respect its unavailability elsewhere can be a bit limiting. (It is worth remembering, however, that like all flyers it can potentially be taken in an Air Superiority detachment, at least outside of standard ITC.) Its presence in the HS slot also means that it competes with the Broadside, which is one of the best units in the Tau army and similarly-capable of throwing down large numbers of medium-to-high strength shots with excellent accuracy and decent survivability.

I don’t think the Barracuda is good enough to be a major tournament contender, but neither also is it bad enough that you couldn’t succeed while using one- it’s just not something that is gonna grab people’s attention in most cases. It suffers from the problems that most flyers do (difficulties with turning radius, doesn’t contribute anything turn 1) and has the additional problem of being unable to score objectives, as it lacks hover mode, which is particularly damning in a Tau army where the scoring presence is often very weak already. As it doesn’t bring anything truly unique to the table, either- mid-strength shooting in quantity being one of the most prolific upsides of almost every Tau list- I think you’re hard-pressed to justify its use on strictly competitive grounds, but if you decide to bring one it’s hardly going to be a non-performer. Just keep in mind what it can (and can’t) do when putting together the rest of your army and you won’t really have any huge problems. 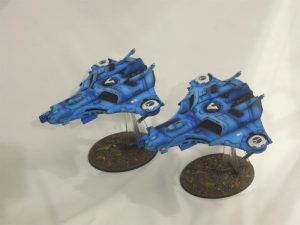 The Barracuda AX-5-2 fits the mold with a lot of Tau units, in many ways- it is a solid vehicle with decent guns and decent special rules but a few noticable weaknesses that can be exploited by the enemy. Its price tag is a touch on the high side overall, but it certainly comes with firepower to match as well as somewhat-situational survivability. It ranks as a solid upper-middle-tier unit, the sort of thing you’re likely to see around the 2-2 tables of many a tournament or in a casual list down at the game store. If more units in the game were on par with it, as opposed to the divide many books have between “total garbage no reason to use it” and “of course you maximize these they’re the only good thing you have” units, I think the game as a whole would be a lot healthier.

As always, remember you can order GW product at up to 25% off from Frontline Gaming if you’re looking to start a new army or fill out an existing one.