Hello everybody, Danny from TFG Radio here to bring you one of the most recognizable, most iconic bugs in the 40K universe and totally legally distinct from HR Gieger’s work, the Genestealer! As always, you should check out Frontline’s Tactic’s Corner and its ever growing collection of tips and tricks. 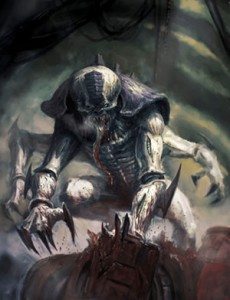 The Genestealer is the Hive Fleet Shocktrooper, a vanguard villain designed to get in, get close, and tear things up with nasty melee. Long ago, they were the most feared melee unit in the game, and they are still the Tyranid’s best melee troop choice, but we all can’t live in the apogee forever, and these bugs are starting to show their age.

Broodlord may take Biomorphs: Adrenal Glands, Toxin Sacs, Regeneration (4+ to regain a wound at the end your turn), Acid Blood (bonus attack when wounded in melee)

So, the mighty Genestealer has a fair bit of options here. You can add an extra CCW to give them 3 attacks base, and with Furious Charge, they are pumping out S5 rending, which on crazy dice, threatens just about any armor there is.  You can also add in a Broodlord who adds some additional combat punch with 4 attacks base at WS7 and S5. The Broodlord also comes with 3 Wounds, so you could shunt a few wounds to it to keep some Stealers alive. As detailed below, the Broodlord also brings some psychic shenanigans to the table.

In terms of upgrades, you are likely best going cheap. Scything Talons is likely the most bang for the buck as everything else starts to stack up too fast, and you really rely on Rending to get the job down here, so more attacks is better than higher quality attacks. This is sadly true for the Broodlord as well as he nearly doubles the cost of a minimum unit on its own, so unless you really want the extra Warp Charge, it is best to focus on just more Stealers. 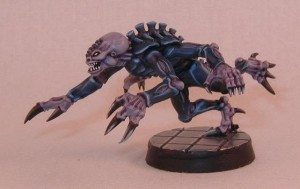 Move Through Cover: Roll 3d6 for moving through cover tests.

Bulky (Broodlord only): Counts as 2 models for transports.

Psyker (Mastery Level 1) (Broodlord only): basic psyker, but always has The Horror power.

So, the standard Genestealer, befitting its fluff as a vanguard unit, is solid at being able to deploy up the field or coming in from the sides. Fleet standard helps them make sure they can stick their charges, and as they are going to run more times than not the first turn of the game or from Outflank, being able to get just a bit more movement can be clutch. With the Broodlord, you get a tiny psyker that is forced to know one of the crappier Tyranid Powers, but he is a bit of a backdoor Synapse as thanks to the FAQ, it is clear that it gets the Primus power, so it can turn himself into a 6 inch Synapse bubble. A bonus you may notice is that Stealers do not have Instinctive Behavior, so they never have to worry about them not doing what you want. They do lack Fearless though, so they can be swept in combat if not within Synapse range. As a Troops choice, you also get Objective Secured easy enough, and Obsec Outflanking units can be game-winning.

So, how do we use what was once the premier melee unit in the game? Well, the first and most obvious choice is as a first wave melee threat. With rending base and 3 attacks on the charge at WS6 and I6, these bad bugs have the chance to kill just about anything they hit, and they will hit before just about any other unit save for Harlequins and a few characters. They can be taken in a unit of up to 20, so you can get a huge unit that infiltrates up the board and forces your opponent to start raining shots into them as otherwise, they are going to get charges off Turn 2 unless playing Hammer and Anvil. With the usual Tyranid buffs like a Venomthrope or even Catalyst for Feel No Pain, 20 Genestealers can require a great deal of fire power to neutralize, so while your opponent has to focus fire on the big unit of death coming at them, the rest of your army has a chance to start bridging forward. Against a lot of the crazy psychic Deathstars out there, most which lack a lot of shooting, a big unit of Genestealers isn’t a terrible tarpit (assuming they are in Synapse) as they get to hit first and with rending, they have the chance to start wracking up wounds and damage before being killed. With WS6 native, they also hit most other things on 3+, getting you more chances for those 6s to wound. You could also Outflank a big unit too, forcing your opponent to deal with 20 Obsec, mean, melee bugs in their backfield. You can also use the Broodlord’s Hunting Pack formation to get Preferred Enemy against a unit as well as better infiltrate within buildings and ruins, but this does get pricey, and if you bring a large squad, it can be hard to get them all inside of a single Ruin terrain. They also lose Obsec this way.

You can also take a bunch of minimum squads and use them as Outflanking Obsec. With fleet, you get a better chance of not rolling a 1 or 2 on the Run, so they can shimmy up from the side of the board about 9 inches consistently, and in melee, they can threaten quite a few units. At T4, they are just about as tough as Tyranid troop choices get, and they can Go to Ground if need be to really hunker down on an objective. You can also go with the Manufactorum Genestealers Formation for better infiltrate when in ruins or a building, but you only get minimum squad size and they lack Obsec.

With Tyrannocytes, you can load up and drop a big squad of 20 (or 18 with a Broodlord) right into the heart of the enemy, and again, killing 20 models is not always easy, depending on the army build and where the Tyrannocyte falls. They still have to wait to assault, but if you are going to spend the points on a Tyrannocyte, you might as well invest in the Genestealers to drop and at least scare your opponent.

So why has the shine dimmed for these bad bugs? Well, there are some of the usual Tyranid problems. First, they are a melee unit that relies on high initiative to hit first and thus not take as much damage, but they have no assault grenades, so many times, they go last. That’s bad. With only a 5+ save, they are going to die when wounded, and while T4 is good in the Tyranid world for infantry, it is just not enough. A good drop of Bolters will really hurt this unit, let alone any Tau guns with Markerlight support.

They are also expensive as with an extra attack and Furious Charge, you are spending about 20 points per model, and that is just too much for a unit that has to walk up the board. Really, if you want to use them, you have to use them as cheaply as possible as Furious Charge is nice, but you are relying on the Rend, and 4 attacks on the charge is nice, but that’s probably the limit of upgrades. Going for Poison or Furious Charge really just makes them far too expensive for what they do. The Broodlord is not worth his points as while he does bring 3 wounds as well as S5/T5, he just doesn’t hit anywhere near hard enough. Back in the day, he used to ignore armor like a Monstrous Creature, but now, he just relies on rending, and with 2 attacks more than a Genestealer for 4 times the points, you can just buy 4 more Genestealers and get 4 more attacks for the points. If you are trying to spam Warp Charges, there are much cheaper and efficient ways to do such in Tyranids than a Broodlord.

Let’s also talk about the xenos in the room, the Purestrain Genestealers from Genestealer Cults. There is honestly not a lot of good arguments for taking Tyranid Codex Stealers anymore as GSC Stealers (all for the same points mind you) come with Stealth, a 5++ invulnerable save, and the Cult Ambush/Return to the Shadows special rules. Again, for the exact same points, you just get so much more survivability and deployment tricks. If you really want Genestealers in your army, especially as a distinct melee threat, try the First Curse formation from GSC. The only advantage that Tyranid Stealers have is that they are Objective Secured, so if you really want to stay pure Hive Fleet, you need to think of them as small Objective campers and outflanking units, not as a major melee threat. Hopefully, Tyranids will get an update and we’ll get Stealers with even just the Stealth and invul save. That alone would make them a great addition to an army as a Troops choice.

So yes, are Genestealers competitive? Likely not, at least not Hive Fleet Genestealers. You could find some success with them as small, Obsec, Outflanking units as this can give a Flyrant list a bit more ground-game. Still, they are as iconic as iconic can be, and in friendly games, they can set up some memorable moments.

Well, that wraps up these bugs, and tune back in as I keep moving through the Troops section, and of course, check out TFG Radio.  Be sure to say hi to us if you happen to be at LVO.