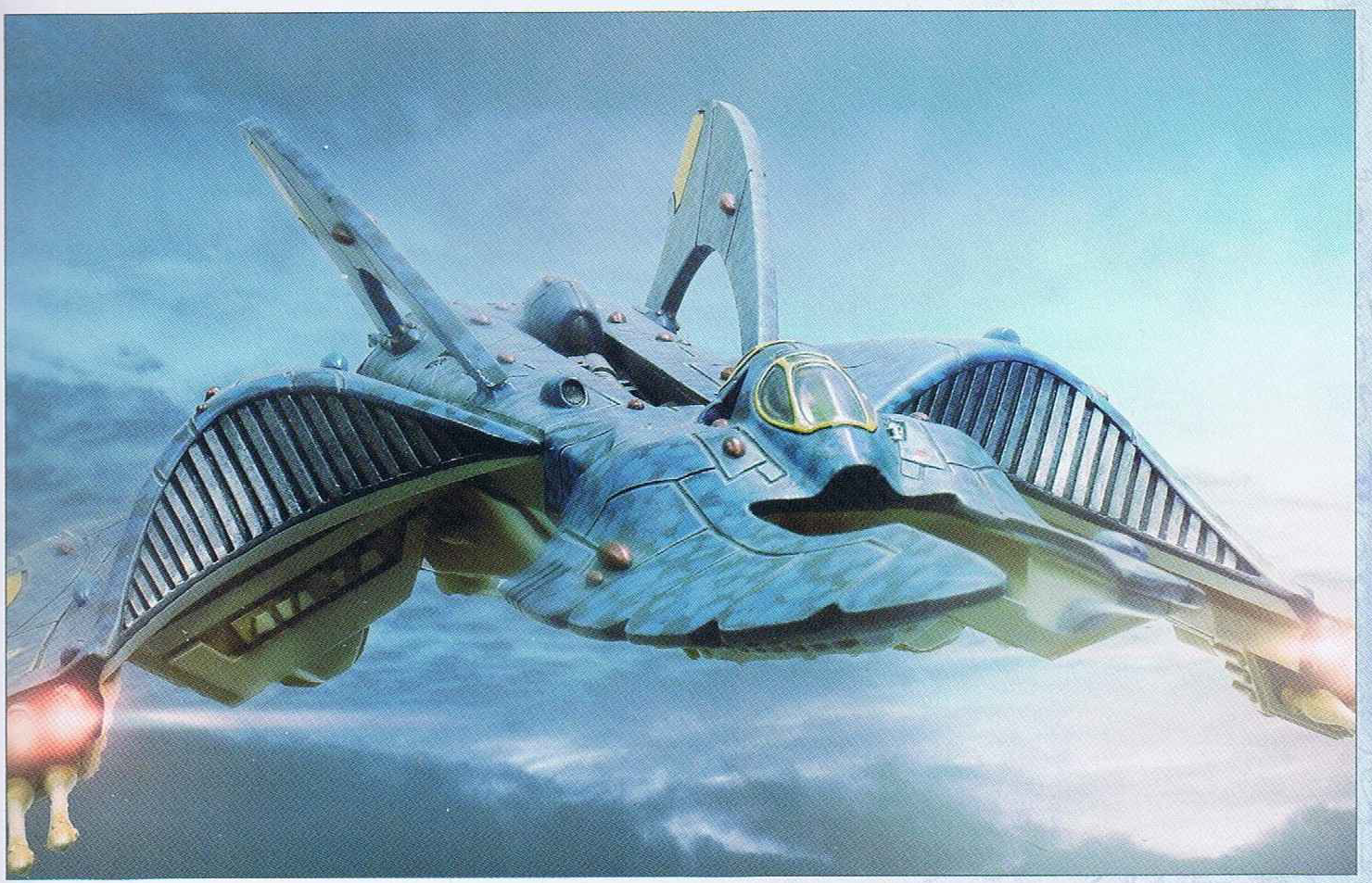 Greetings fellow gamers, Ibushi here reporting on the Lord of War choice for the pointy-eared space pirates – and one of their more unusual units – the Corsair Vampire Raider. This thing is alternately a beast and a question mark, read on to find out what it can do on the tabletop! And be sure to check out the Tactics Corner for the rest of the Corsairs series and many more great articles.

The Vampire Raider is a special bird, not only because it is the only Superheavy Flyer Lord of War choice out there, but also because it is an awesome model that weighs more than your firstborn child. The kit is solid resin and takes up most of your deployment zone, making for an amazing centerpiece model to a collection, army, diorama, or even just your living room if your loved ones can be easily manipulated (in my case that would be a no, making this the first Corsairs article where I haven’t actually played the models on the tabletop yet – sadface). Now that we’ve established how awesome the Vampire Raider is, let’s look at how it is yet another enormous missed opportunity from Forge World in the rules department: 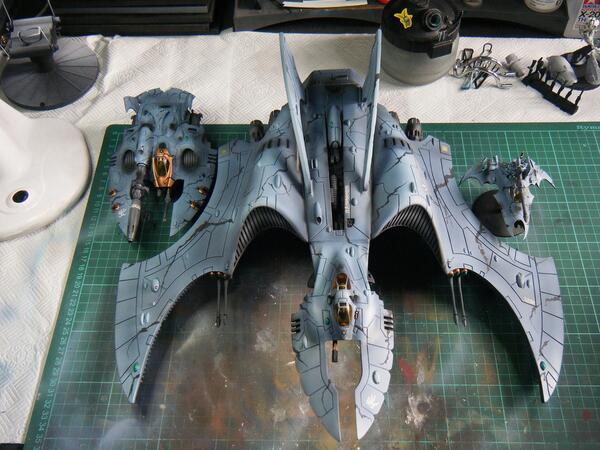 The Vampire Raider is a Superheavy Flyer with Hover mode, coming at BS4 AV 11/11/10 and with a whopping 12 Hull Points. Unlike the Phoenix Bomber is does not get Stealth which is unfortunate, and unlike regular skimmers or Flyers it is unable to Jink either, due to being a Superheavy, but that does seem quite fair when you see the model. It does come with Strafing Run which is a nice bonus, as well as Supersonic and Deep Strike, which are a bit meh when you consider how enormous the thing is, making it very hard to place on the table in a lot of games.

In the weapons department the Vampire Raider is less than amazing, rocking two twin-linked pulse lasers and a scatter laser. The pulse lasers can be upgraded to a twin-linked Pulsar, which is much more appealing, putting out 2x S: Destroyer ordnance large blasts, or twin-linked Phoenix missile launchers, which is a typo and a joke – it should be 2x twin-linked Phoenix missile launchers, but even then 6x s5 ap3 shots is not that great. That’s it for weapons, but the Vampire does also come with Corsair Kinetic Shrouds (or Holo-Fields for the Eldar version), and a 30-model transport capacity, which is bumped down to 20 if the weapons are upgraded.

As a Superheavy Flyer, the Vampire cannot jink, but it can at least carry multiple embarked units, and the unit entry specifies that up to 3 units may disembark in a single turn. You are still limited to a single unit embarking per turn, but that’s not such a big issue.

Now for the kicker – the Vampire Raider for whatever reason costs 730pts. 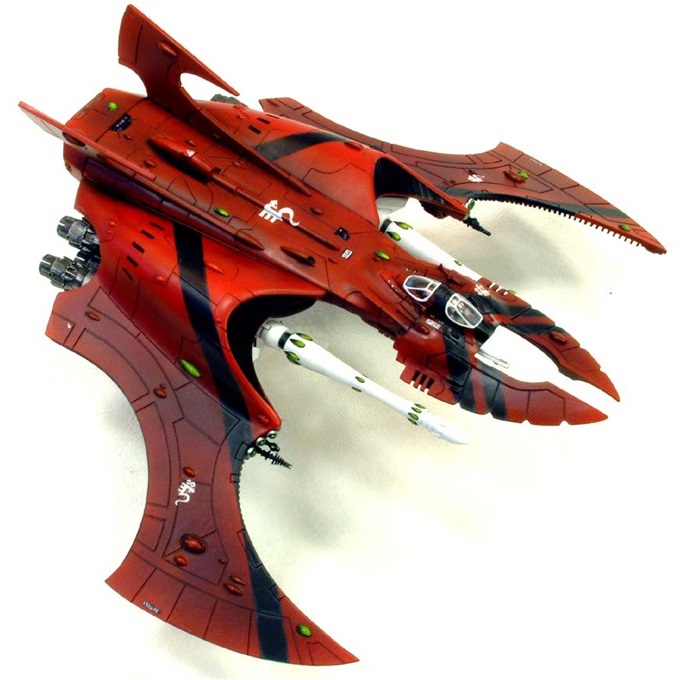 What to do with this big mama? First off, you have to take the Pulsar, the pulse lasers or phoenix missile launchers are just a joke for the 730pts. At least with 2x large blasts hitting at full Strength D there is something to offer, and with the 60” range and the height and size of the Vampire you can essentially shoot anything on the board with this option. That leaves a 20-model transport capacity, which thanks to the GW FAQ has to be a Corsair unit – probably a great place for two squads of fusion Reavers with jetpacks, ready to pop out the back and wreck face, then fade into opposite board corners with Reckless Abandon.

The big question is how to ensure this whopping investment doesn’t spend until turn 4 off the board doing air doughnuts, and how to ensure that your AV11 Vampire doesn’t just get punked out by scatbikes in turn 2? Also bear in mind that the Sky Burners coterie does not come with the Lord of War choice, only the Command section is allowed to take a Vampire, representing the fact that these are highly prized personal war machines of the Prince himself. Unfortunately this doesn’t do the Vampire any favours, by denying any bonuses to Reserve rolls and the lovely 1d6” scatter ability. Oh well, we will have to make do. In answer of both of these questions, the smart strategy seems to be to forget the Corsair Fleet Raiding Company detachment, and instead take a Corsairs CAD with a Fortification slot – pick up a Skyshield Landing Pad (it can even be an Imperial One – the Corsairs are fine with using the enemy’s infrastructure against them!), and put your Vampire on that. This is the same logic as the classic Lynx on a pad from a season or two ago, where the 4++ helps keep the D-slinger alive, while for the Vampire it also makes sure you start on the table. Then depending on deployment and the opponent’s army, the Vampire can take off and start flying around to make it harder to shoot, just be aware of positioning as from a logistical standpoint it can be difficult to place this model without getting too close to enemy models. This does bode well for a decent amount of damage output, and should keep the Vampire performing all or most of the game. Turn 2 or 3 the fusion Reavers can drop out and start blowing things up, or maybe start with Balestrikes in there and just drop them out on the pad.

Basically the Vampire can function as a giant Corsair bunker turn 1, protecting some dudes and putting out some shooty, but with AV11 there are some risks involved. This does seem like the only solid option to play it though, as keeping it off the board is just too much investment except in huge point games, and deep striking it is very, very tricky due to the sheer size of the model. 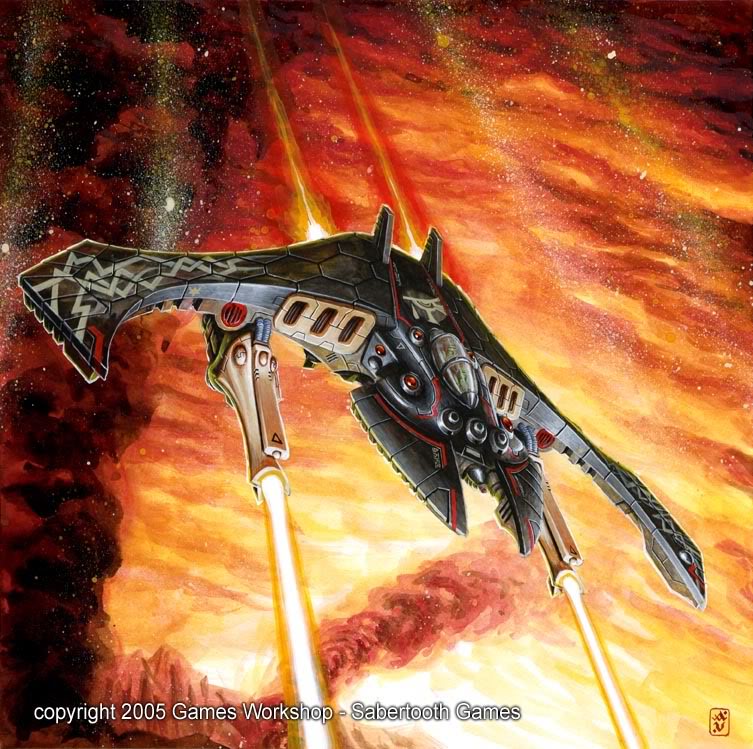 Now if there were just a couple of things we could do to the Vampire Raider, I think we could really make it hum, and make it a fascinating unit on the tabletop as well as on the shelf. First off, think about making it an Assault Vehicle, or at least come in a formation with 1-2 Nightwings that allows it to be an Assault Vehicle. Given that only Corsairs can mount up in it, nothing too crazy will happen, but it does make the thing much more useful as a transport. Secondly, split up the twin-linked Pulsar into just two straight Pulsars, with added solid shot options like the Lynx and add in the two twin-linked Phoenix missile launchers as well. Right now the Vampire is caught in this weird situation where it doesn’t have quite enough shooting to justify the points or clearly dictate how it is played, but upgrading it to a Vampire Hunter with more Destroyer, now it becomes a force. The other issue it currently faces is that despite being a Flyer, it is not able to threaten other flying units — add in a salvo option on the Pulsar like for the Lynx, and bam this guy becomes an aerial presence too, especially against the likes of Magnus or flying Daemon Princes. If it is not supposed to really be a shooting unit, which is “supposed” to be the Vampire Hunter not Raider, then the transport capabilities need to deliver something slightly more special. Thirdly, just bring down the points, big time. If the current version was 500pts that would go a long way, but 730 just seems completely outlandish.

The Vampire Raider should be on a much lower end of the spectrum, let’s say 500 for argument’s sake, packing a scatter laser, 2x phoenix missile launchers, 2x twin-linked pulse lasers, and an option for a Pulsar at +50pts which would be keel-mounted and reduces the transport by half, but does not have a Salvo firing mode. Three units can hop in or out per turn, or one unit can disembark and assault, but not after Deep Striking. For +200pts the Raider could become a Vampire Hunter where the pulse lasers become 2x Pulsars and come with salvo modes as well as saturation firing, but the transport capacity is eliminated? Could be some fun options there. 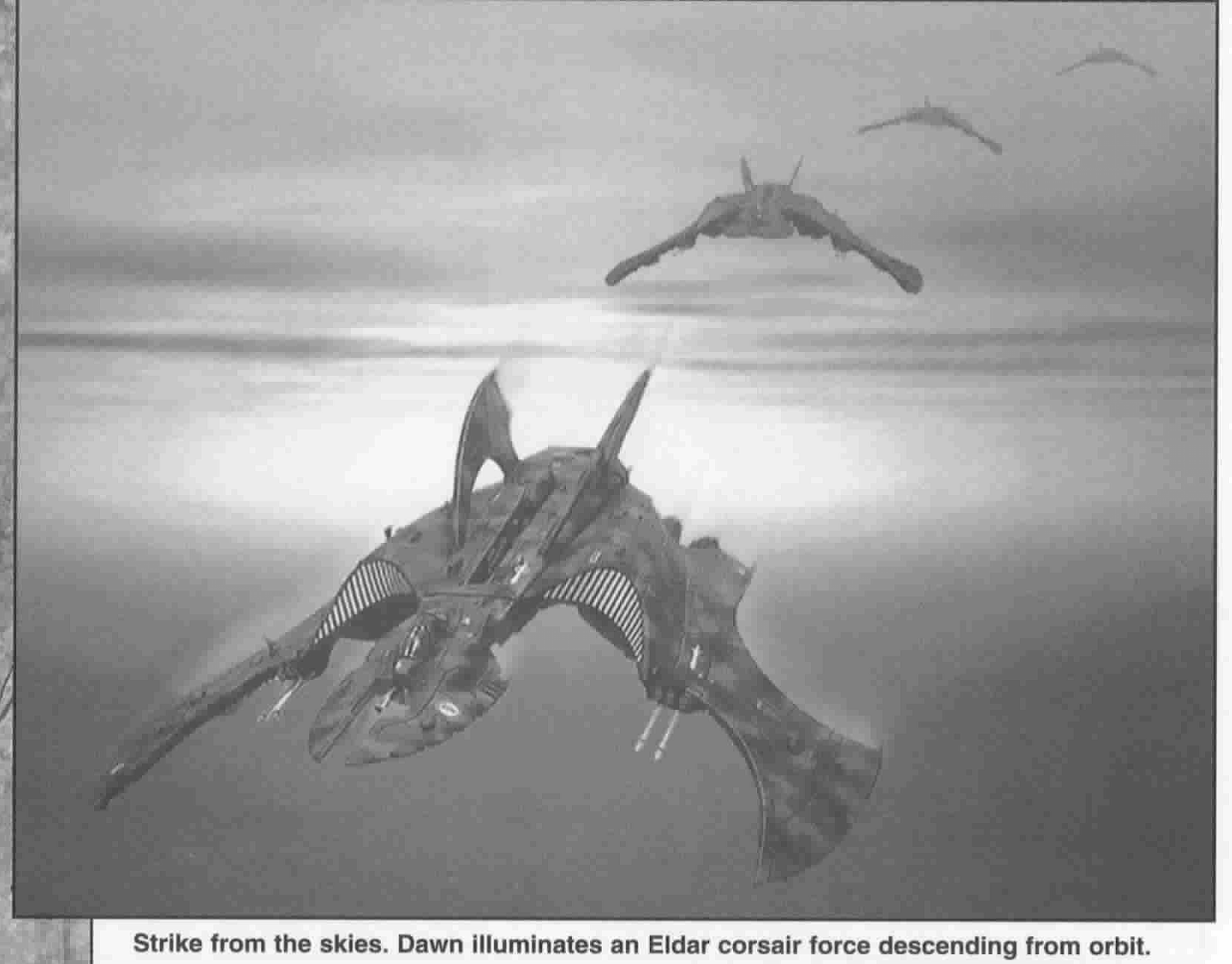 At the end of the day, the Vampire Raider is a freaky creation that would be super fun to play in an Apocalypse game as part of a highly themed Corsair raiding force working with some Craftworld or True Kin allies, but at the 1850-2000pt level, especially in a competitive setting, the unit just does not live up to the price tag. Even so, the Vampire Raider is an iconic Forge World model, it is a super cool centerpiece, and really deserves some love.