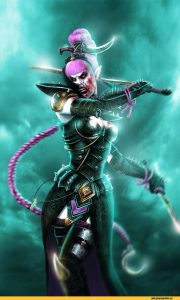 Zyekian here once again taking a look at the ins and outs of Codex:Dark Eldar, panning for gems in the proverbial rock pile.  This codex is actually stocked with a number of odd and very cool units, many of which are virtually unseen on today’s tables even in casual matches.  Like Beastmasters the reason for this probably has to do with expensive finecast than the rules themselves. As we’re about to see the Court of the Archon can be a useful tool in a Dark Eldar list.  And as always check out Frontline Gaming’s Tactics Corner for more reviews and tactics on your favorite 40K units!

Dark Eldar Archons surround themselves with bodyguards and pets of other races when they don’t trust the ambitious Dracons of their Kabal.  The company they keep works as a menagerie of up to four model types similar to Dark Eldar Beastmasters.  The unit actually functions as a stand-alone HQ, however if an Archon is present in the detachment the Court does not take up a slot.  This ends up being a minor feature but it’s there for anyone looking to squeeze in another Venom.

The Fracture of Biel-Tan release has included the Court of the Archon as take-able Ynnari units at the expense of losing Power from Pain.  Only the Lhamea even has that power to lose so we’re seeing the Court become more dynamic.  The overall power increase of this unit is on-par with similar units in the codex though with perhaps Medusae gaining significantly.  Clever players will also use an open HQ slot to grab a cheap suicide Court unit as a Soul Burst trigger. 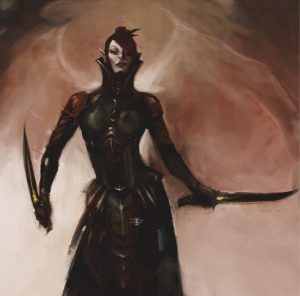 The warrior-courtesans of the mysterious Sisterhood of Lhilitu are an Archon’s most desired companions.  The sisterhood worships the Dark Muse Lhilitu, a demigod of seduction associated with Shaimesh, Lord of Poisons.  Drawing from both demigods’ teachings, these assassins can fell any opponent with a dagger or even barbed hair pin.

Lhameans have a Kabalite stat line with a bump in leadership.

Lhamaens are actually a real value at ten points.  Against T4 enemies they’ve got nearly double the melee killing power as a Wych for the same points, nearly as much punch as a stock Harlequin.   Their poison (2+) will reliably push wounds onto high-toughness characters and monstrous creatures, often forcing instant-death saves they don’t want to have to make.  Lack of combat grenades and overall frailty is a large enough issue to keep them from being special but there’s real potential here.  Hiding one or more Lhamaean behind a shadowfield Archon, Corsair Prince, or Sslyths will give certain armies pause.

What we see most often though is a single Lhamaen run as the Warlord of a Dark Eldar army either rocking her own Venom or hidden in reserve.  Low-balling the cost of a Dark Eldar HQ gives the army even more MSU potential with little loss since the HQs aren’t very good to begin with.  The drawback is giving up an easy Warlord point for the opponent so care must be taken to keep her safe. 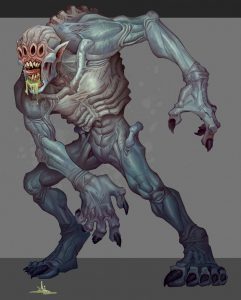 As far as anyone knows no Ur-Ghul models have ever been seen on a table.  Being an expensive piece of finecast in a lesser-played army with little in the way of rules to make them useful, Ur-Ghuls may be the rarest model in all of 40k.  Are they worth taking?  No not really.

These guys are a T3 model with no save and FnP that will often be ignored.  For 15 points that’s a serious problem.  Yeah they can churn out S5 punches but with no staying power, no gun, no grenades, and no enhanced cover save, they’re useless.  For ten more points you can get a Sslyth.  Let’s leave it at that. 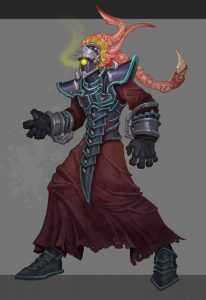 Medusae aren’t Dark Eldar but alien creatures that cast opponents into a coma, wiping out their entire mind with a single glance.  Their Archons then pluck little “brain fruits” out of their Medusa’s grey matter for a snack, savoring the sensations their victims had over a lifetime.  Delicious!

For 25 points Medusae pack the same profile as a Lhamaean and even retain Power From Pain I guess because they’re so good at feeling bad.  Medusae have an exceptional weapon called Eyeburst that will give folks pause before assaulting their Venom.

Twenty-five points is a lot though for such a fragile unit so it needs help, either run behind a shadowfield Archon or mixed into a unit of Sslyths to get majority toughness five.  Wise opponents are going to either target the Medusa’s transport or keep their distance so consider deep striking them in a venom and hoping for a friendly scatter.  Chances are fairly good that they’ll need to disembark to get into proper template position though, leaving them exposed.

In the ITC with templates now hitting all levels of ruins Medusae now pick up a bit more potential.  They’re still going to end up something of a 40k honeybee, stinging once and then probably dying.  The sting may be worth it depending on the opponent though, and the Dark Eldar codex isn’t exactly stocked with templates or other shooting to ignore cover.  Taken in a Ynnari list, Soul Bursting Medusae can get significance more work done and can will be potent in a deep-striking Venom.  Expect to see a bullseye on their back when run this way. 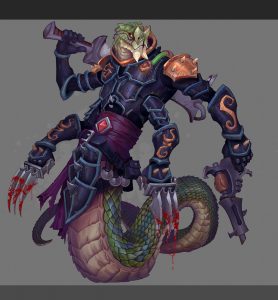 Snakes with arms…  lots of arms.  The whole point of snakes is to not have arms but it turns out snakes have been doing it wrong for millions of years.  Let’s take a look:

Sslyths are versatile, underrated, and overall terrific fellows, feeling more like Haemonculis Coven units than typical Dark Eldar.  Like Wracks without all that unwanted Wrackiness.  Like poor-man’s Grotesques.  Five S5 attacks on the charge each with fleet gives them some real potential to crack open a Rhino or force a stack of power armor saves.  If you want to fill a cheap HQ slot unit Sslyths are arguably even better than Lhamaens.

That leadership value of three creates problems if you take more than one however.  Sslyths will slither away if you let them so just run one or pack an HQ into the unit.  Dark Eldar HQs solve this problem by embedding with Sslyths the same way they work in units of low-leadership Grotesques – and without the Bulky rule limiting transport options.  And of course you can always drop a cheap Lhamean into the unit to keep them in line and mix in their nice point-effective killyness.  There’s a recipe here for a solid unit that nobody is playing. 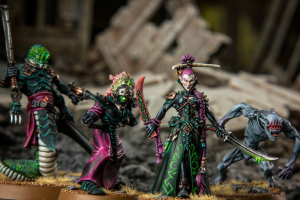 What are your thoughts on the Court of the Archon?  Are they unseen for a reason or is there real potential here in today’s meta?  Comment down below!  And remember, Frontline Gaming sells Games Workshop product at up to 25% off, every day and will buy your used models for cash or store credit!