A Beginner’s Guide to Circle Orboros

You are here: Home › Hordes › Tactics › A Beginner’s Guide to Circle Orboros

Do you look at Warmachine and scream “Where are the cannibal barbarians, and giant murder satyrs!?” Then welcome to the big wide world of Circle Orboros, my friend.Check the Tactics Corner for more great articles!

Hey guys, BigVik here with another installment in my series of articles overviewing the factions of WarmaHordes. This week we look at the mysterious Circle Orboros.

The Circle Orboros is the oldest continuous human civilization. Highly reclusive and secretive, these shamans and druids are seen by locals as priests of their god, the Devourer Wurm. These druids are known by outsiders as black clads, for the long dark cloaks they wear into battle. These black clads both draw power from, and deeply fear the Devourer Wurm, for they believe that if it were to center its sights on the world of Caen, that the Wurm could cause the land itself erupt and end life as we know it. As of such the black clads maintain

The playstyle of circle is very tricksy. They use a combination of high threat range, and yo-yo like reposition shenanigans to avoid reprisal after they alpha strike to create a very guerilla warfare kind of feel to the faction. A large proportion of the faction has pathfinder, magical abilities, and the ability to adapt to a wide variety of situations, and not just with toolbox warlocks either!

The warlocks in Circle Orboros follow a menagerie of themes, from stern uncompromising black clads, to blood thirsty barbarian warlords, to a tree that eats souls. And the scariest one… is the tree! 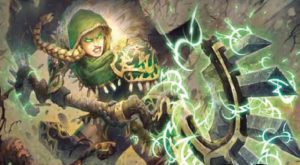 For our first ‘Lock we’ll be looking at is Tanith the Feralsong. Anyone who’s played against her in a battlebox game knows my pain. She has very average stats up to her staff’s ranged attack, with a pretty long range, on a direct hit she centers an aoe on the hit model. Enemy models under the aoe are affected by Shadow Bind, which is a shakable defence debuff which disallows movement other than to change facing, it’s painful.

For spells, she’s got admonition, affliction, bleed, rift, and scything touch. Admonition allows the model targeted to move away after an opponent’s model ends movement near it, affliction is a defence debuff, that causes damage if further attacks fail to inflict damage themselves, bleed is a cheap crappy nuke that heals tanith when the spell damages, rift is  another nuke that drops a rough terrain aoe, and scything touch is an upkeep that gives a model/unit dark shroud, enemy models within melee range get an armor debuff. Her feat is pretty killy, she can channel through her beasts, and spells cost 1 fury less to cast.

Tanith is a very good tool box, she’s got both defense and armor debuffs, and she has a pretty strong spell assassination, especially with specialized support. I think she is a great start for any starting Circle player, especially as she epitomizes many of the themes in the faction. 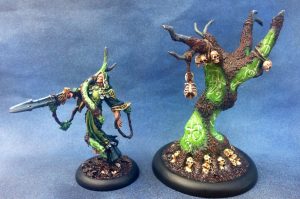 Wurmwood… ah wurmwood. This is a very unique caster, effectively a tree with an attached super solo. Wurmwood has got some weaknesses, he is in fact a tree, but he has prowl, high armor, the ability to buff his own armor with souls, and the fury mechanic, though this makes him near invulnerable from range he is super killable in melee. 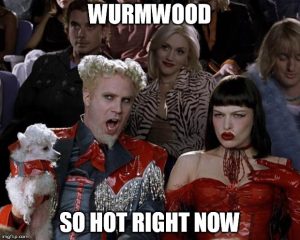 Now that his long list of weaknesses are handled, let’s look at what this guy is packing. High armor low defence, soul shield, highish fury stat, eyeless sight, advanced deployment, and a few abilities that sum up to he effectively doesn’t have a back arc and can cast spells out of his back arc. 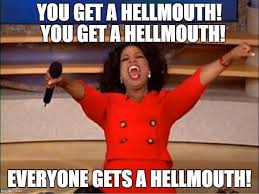 Wurmwood further has curse of shadows, dark path, hellmouth, rapid growth, and stranglehold. Curse of shadows is an offensive armor debuff that stops free strikes, dark path allows wurmwood to teleport to cassius or vica versa, hellmouth is pushes models toward the hit target, then centers an aoe on them for some nice dude killing, rapid growth creates forrest templates, and stranglehold makes the target forfeit movement or action if damaged. His feat is pretty simple, Wurmwood’s command range becomes a forest and enemy models knocked down in the forest suffer 1 damage point. 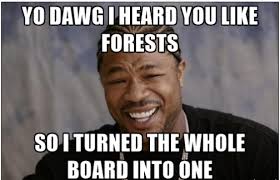 This doesn’t sound particularly game breaking when you look at the pieces, but consider that wurmwood has a way to move enemy models around, and can force forfeiture of action or movement. Coupled with his ability to apply armor debuffs, and has the ability to make the vast majority of his force unseeable for a turn, means he generally plays the game he wants, and is thus an exceptional control caster. 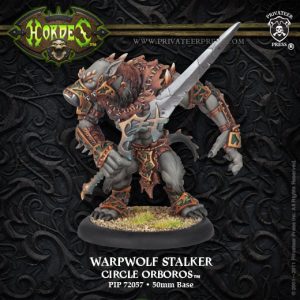 Circle Orboros has some very cool themes expressed in their beasts, from  warp wolves, a mix between chaos spawn and werewolves. They’re fast, they hit hard, and they can have some pretty unique defensive buffs built in. 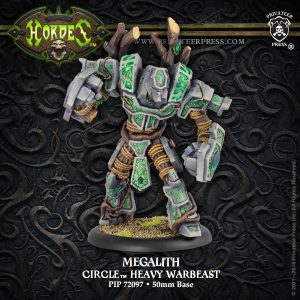 Wolds are magical constructions similar to warjacks but constructed from stone and vines, infused with magic to give them a connection to the magical ley lines through the land as a source of power. 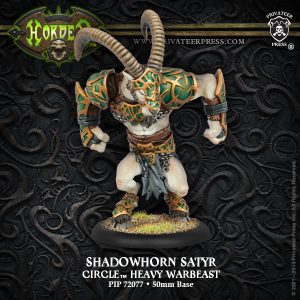 The satyrs are a combination of themes that involve beating back and slamming your opponent’s models around. The odds and ends are the griffons, exactly what they sound like, the argus, two headed ranging hounds, and Gorax Rager, which looks to me like if a Hulked out farm animal.

The infantry in Circle Orboros come from varied themes. Black Clads are the most obvious theme, they are the druids and shaman which have the magical ability and wisdom to do all kinds of nifty tricks, from hunter’s mark, a combination of fury management and threat extender, to repairing wold constructs, these guys have a myriad of abilities. 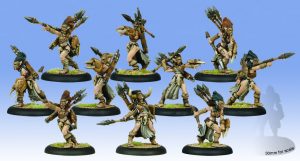 Tharn are the barely controlled cannibalistic barbarian hordes which fill much of the numbers within the Circle. They draw power from blood magic, and ritual sacrifice, in order to do things like heal, cut a swath through foes, and even make opponents’ models explode. 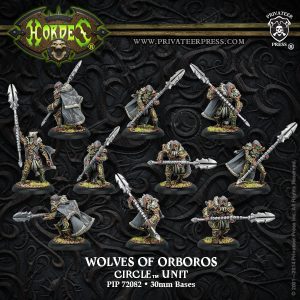 Wolf Sworn are the somewhat more civilized counterpart to the Tharn, excluding the Death Wolves but that’s for another time. They form the closest thing to the rank and file of the circle forces, they supply basic spearmen, and Reeves which carry double crossbows. 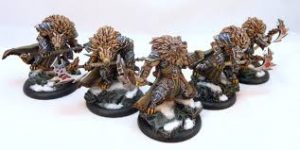 Finally we have the Warpborn, they are effectively werewolf infantry, and they are a combination tarpit/ murder mayhem against light infantry. They are some of the last multi-box infantry in the game to retain 8 boxes, and they have unyielding to make them pretty hard to displace with their hyper regeneration ability.

All in all Circle is in an interesting place competitively. They have Wurmwood, Una 2, Tanith, Baldur 2, and Kaya 3. Tanith is a tool box, meaning she likes a large number of utility solos, Baldur and Kaya are beast ’Locks making them compete for a slot in a pairing, and the consensus seems to be that Kaya wins most times. 2una is the queen of griffon spam, not like she used to be before that hit from the nerf bat, but trust me, she’s still good! The real boogeyman here is Wurmwood, against a list that doesn’t have an active answer for him, Wurmwood just wins the game before it even starts.

In spite of the Boogeyman, I like Circle as a faction, the wild hearted murderous tree huggers make for a very interesting faction, and its always a good game when they are well piloted.

That’s it for this week, tune in next time for my coverage of trolls… I’d better grab some ale, cause writing that article sobar would just be in poor taste!

← Signals from the Frontline #513: Gathering Storm 3 is Heating up!
Updates to the ITC FAQ and 2017 Season Missions Are Live! →