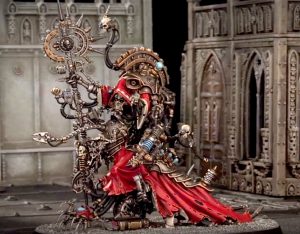 Hi everyone, Michael here with a review of the second of the triumvirate of the Imperium, Archmagos Dominus Belisarius Cawl. For more reviews, analyses and battle reports, check out the Tactics Corner. 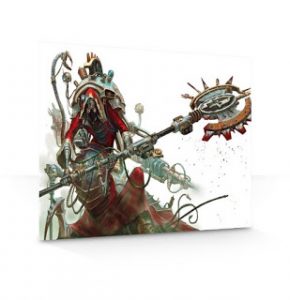 Obviously, Belisarius Cawl has a lot going for him on the tabletop. Let’s break it down and take a look at the different sections and benefits.

First up, durability. Cawl has T6, 5 wounds, Feel No Pain, a 2+ armour save and 5+ invulnerable save. On its own, that is pretty impressive. T6 is pretty good, though not impossible to get around in the current meta. It does mean that most basic infantry are wounding him on a 6 from shooting or close combat. Similarly, a 2+ armour save is pretty effective in combat and against a lot of shooting attacks. The 5+ invulnerable is a bit low, but with his high toughness and high number of wounds, it should help keep him alive for longer against AP2 attacks. Once you add in his special rules, his durability increases greatly. If Cawl is your Warlord, he gets to re-roll failed Feel No Pain rolls, giving him just over a 50% chance of blocking the wound. In addition, he re-gains D3 wounds at the start of each of your turns. This gives him a pretty high level of durability and will require a high volume of high strength attacks to take him out, or a very high volume of lower strength attacks. Now, a lot of armies can put out a high volume of S6 attacks in the shooting phase, but not every army is going to be able to do this. 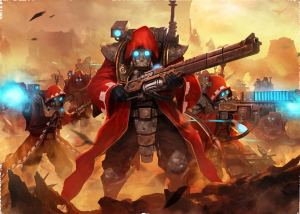 Where Cawl’s durability is going to let him down is the lack of Eternal Warrior. Though he cannot be instantly killed by doubling out his toughness, he is still susceptible to other forms of Instant Death such as Force Weapons, D Weapons or weapons that simply remove the model from play. You will need to be careful when going up against a large number of these types of weapons, but otherwise, you won’t be giving up Slay the Warlord all that often when your warlord is Belisarius Cawl.

Cawl also has a nice weapon to use in the shooting phase. A S10 Meltagun is a nice gun to have. Gaining D3 Master-crafted shots is also great. At BS5, you will generally be guaranteed at least one hit with it each shooting phase. Plus, at S10 in Melta range, there are very few vehicles in the game that you will not reliably penetrate when shooting at them. The only downside is its short range and the fact that Cawl will generally be walking to the target. If your opponent sets up a gunline and doesn’t come for you, it is going to take several turns to get into range of make use of it. In addition, as his gun is S10, it can potentially instant kill anything that is T5 or below. Rampaging Bikers and Thunderwolf Cavalry will have something to fear if he can get past their Invulnerable Saves.

Cawl is not slouch in combat either. He is not going to be able to go toe to toe with the elite of the enemy army, but should be able to hold his own against a number of enemy units. Cawl gets to make 2D6 S4 attacks at the initiative 10 step. At WS5, he will generally be hitting most infantry on 3’s, giving you a possible counter to any weakly armoured horde units that assault him. Even tougher armoured foes might have something to fear if you can roll enough hits and wounds on them, as they are bound to fail some saves eventually. Against tougher armoured foes, Cawl wields a Master-crafted Power Axe. With 3 attacks base, he is not going to chew through a unit of Terminators on his own, but should be able to cause a fair few casualties. 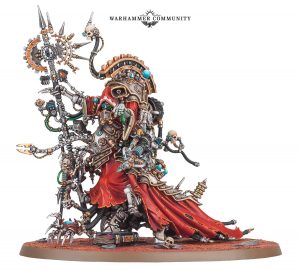 Perhaps fittingly, Cawl should not have a problem taking on enemy vehicles. His Arc Scourge gives him three Master-crafted Haywire attacks, that get to re-roll the Haywire results. Against non-walker vehicles, that should provide him with at least two glancing hits, maybe even a couple of penetrating hits. In addition, the Mechadendrite Hive gives him an additional Haywire attack in combat. Any enemy vehicles that somehow survive the Solar Atomiser could find themselves finished off in combat against Cawl. Against Walkers, he may struggle a little. At initiative 3, he will be striking after any Imperial Knight, but as long as they are not able to D him out before he gets to strike, he should be able to cause a fair amount of damage against them if he gets lucky with the dice rolls. 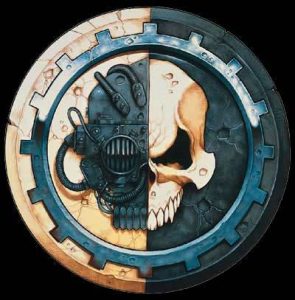 The War Hymnal of Fortitude adds even more durability to the Adeptus Mechanicus. Shroudpsalm is already a very popular Canticle for providing relatively easy access to an army wide 2+ cover save in the War Convocation (assuming your units are already in cover), so getting an additional turn of an army-wide 4+ invulnerable save will boost the durability of the army even further.

It Will Not Die will be useful for any vehicles or multi-wound models in the army, and having a large number of units with the Canticles rule will increase the odds of passing the roll, as you get to roll 2 or 3 dice for the test.

I can see Belisarius Cawl being a huge benefit to the War Convocation army list. Not only do you gain access to the awesome Arcana Mechanicum Relics, you also don’t have to pay for them. In addition, all models in the army gains the Canticles of the Omnissiah special rule, so gain the benefit of the Canticles of the Archmagos as well. As a nice little bonus, any Army of the Imperium vehicles within 12″ of Cawl also gain the benefit, allowing your allies to reap the benefits of the bonuses as well.

Overall, I think that Belisarius Cawl is a great addition to any army of the Imperium, particularly those of the Adeptus Mechanicus. He may not be as tough to shift as Saint Celestine, but he is pretty damn durable and a real threat to enemy vehicles.