Warzone: Slagelse GT Recap – Making the leap, and why it is worth it.

You are here: Home › 40K › Tournament report › Warzone: Slagelse GT Recap – Making the leap, and why it is worth it.

A guest report from the Warzone: Slagelse GT! 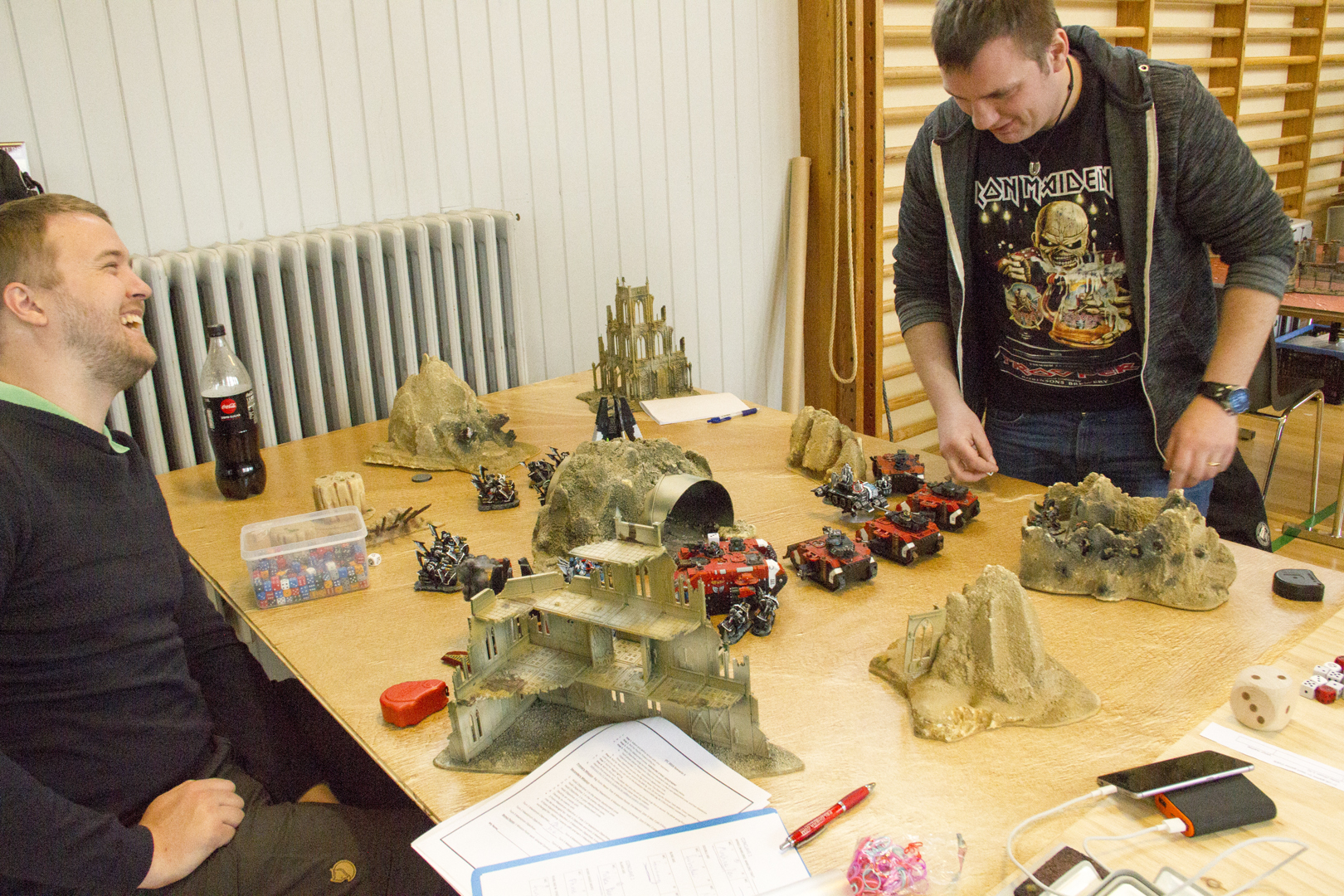 Hi everyone, Rasmus here from the Warzone: Slagelse GT located in Denmark. We recently finished the biggest Singles 40K tournament in Scandinavia, and I am here to tell you our story. Lets hit it off with a little description of our local club and community that made all of this possible. 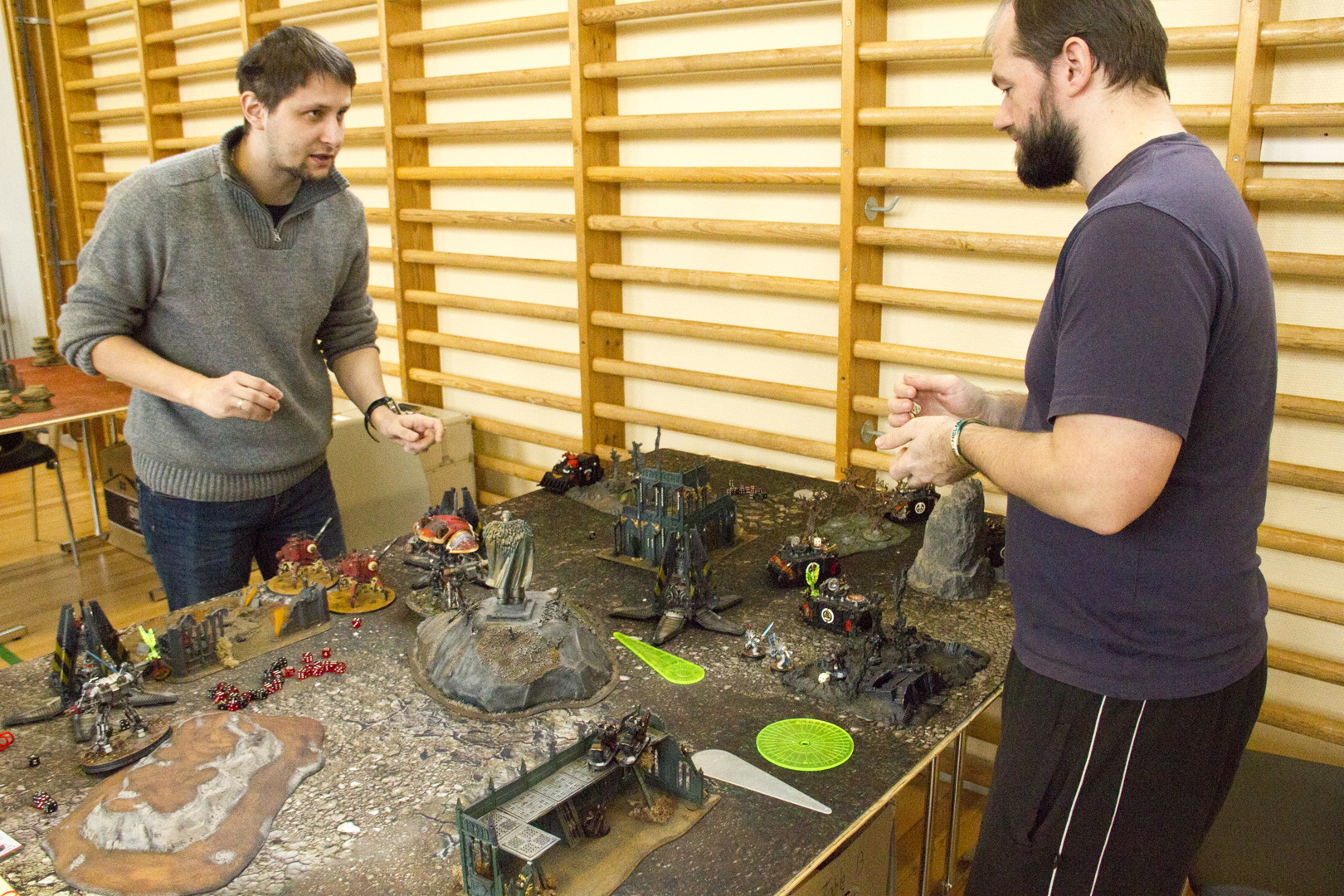 Some guys started off a gathering of old friends nearly 6 years ago, they felt like it was time to start up a club again, and that is how I got involved. It was full of veterans of the hobby, plus a couple of new people, like myself. Within 2 years we had found a perfect site for the future of our club. Now, this concept is probably unique to Denmark, or Scandinavia as a whole. There is a public program for supporting local clubs that open up their doors to the city’s youth and public in general, they provide rooms for us, free of charge, and in our case it means we are located at a small college, in the day hours the rooms are full of students more or less eager to learn. But every Wednesday and sometimes Saturday, there is tanks being driven around the tables and cards being shuffled, while X-Wing fighters dodge meteors. 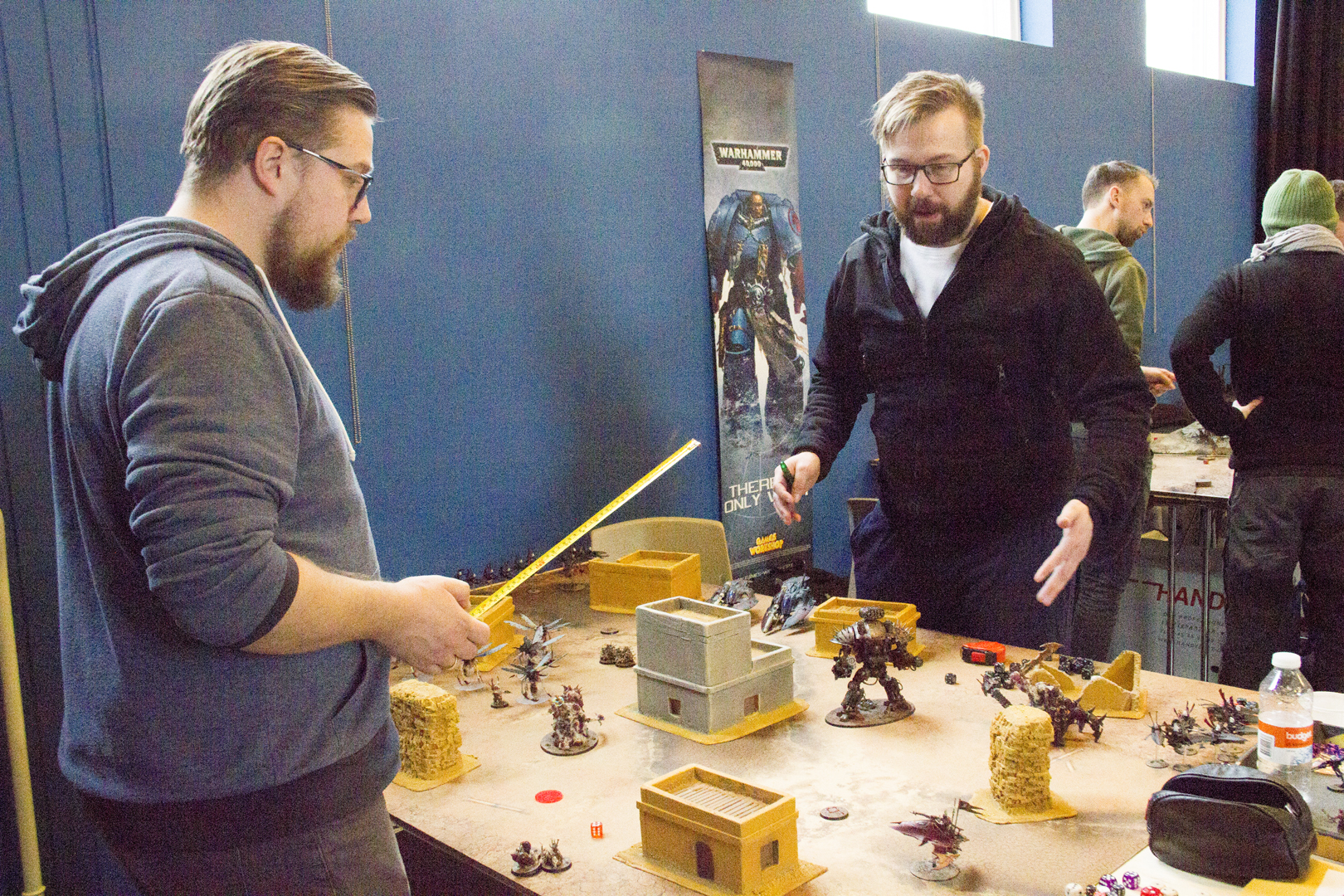 Now about a year ago me and my co-to Sander, thought that we could use the nearby old sports halls to play out a 2 day 40K GT, so we looked into it, and it turned out that the old sports halls were in the so called “pool” of rooms available to our club, also free of charge. With it came enough chairs and tables to host a 60 man event, this was very good! We did have to pay for using some of the class rooms for sleeping, but that was a minor expense. 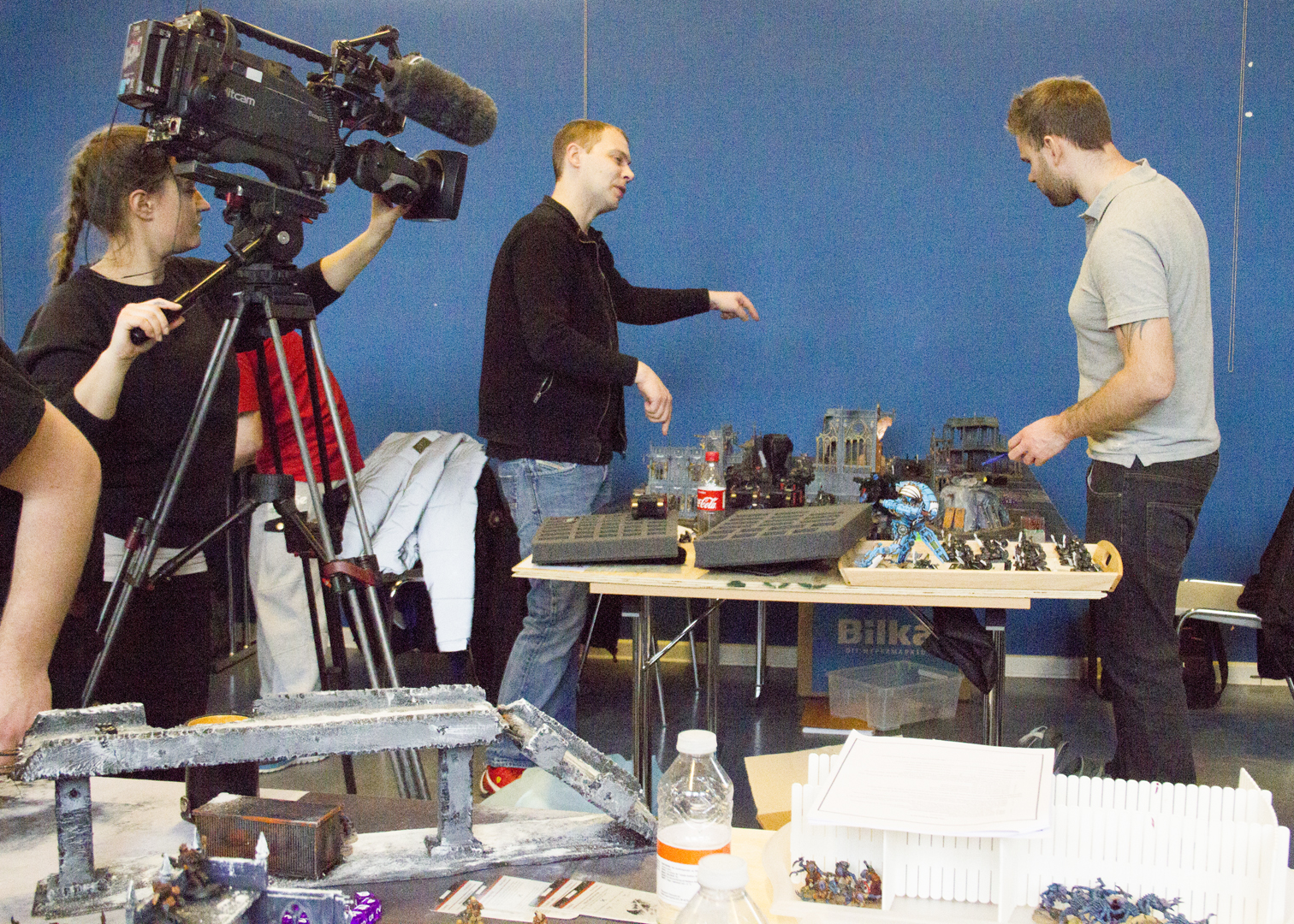 So we launched our website that is called www.warzoneslagelse.dk, and put up tickets for sale. Our price was around 45 dollars for 2 days of gaming with 2 sandwich meals, 1 hot meal and breakfast. On top of that there was loads of price support. Sander became a veritable beast, hunting down sponsors from a local catering company, to an airbrush shop north of the city. We had Kromlech come in, Powered Player, Feldherr and loads of companies. You can find all of them on our facebook page (https://www.facebook.com/warzoneslagelse/) and webpage. To say the least, we were excited, we ended up having a price pool of almost a 1000 dollars, this was big for a new GT that had only run RTT’s before. 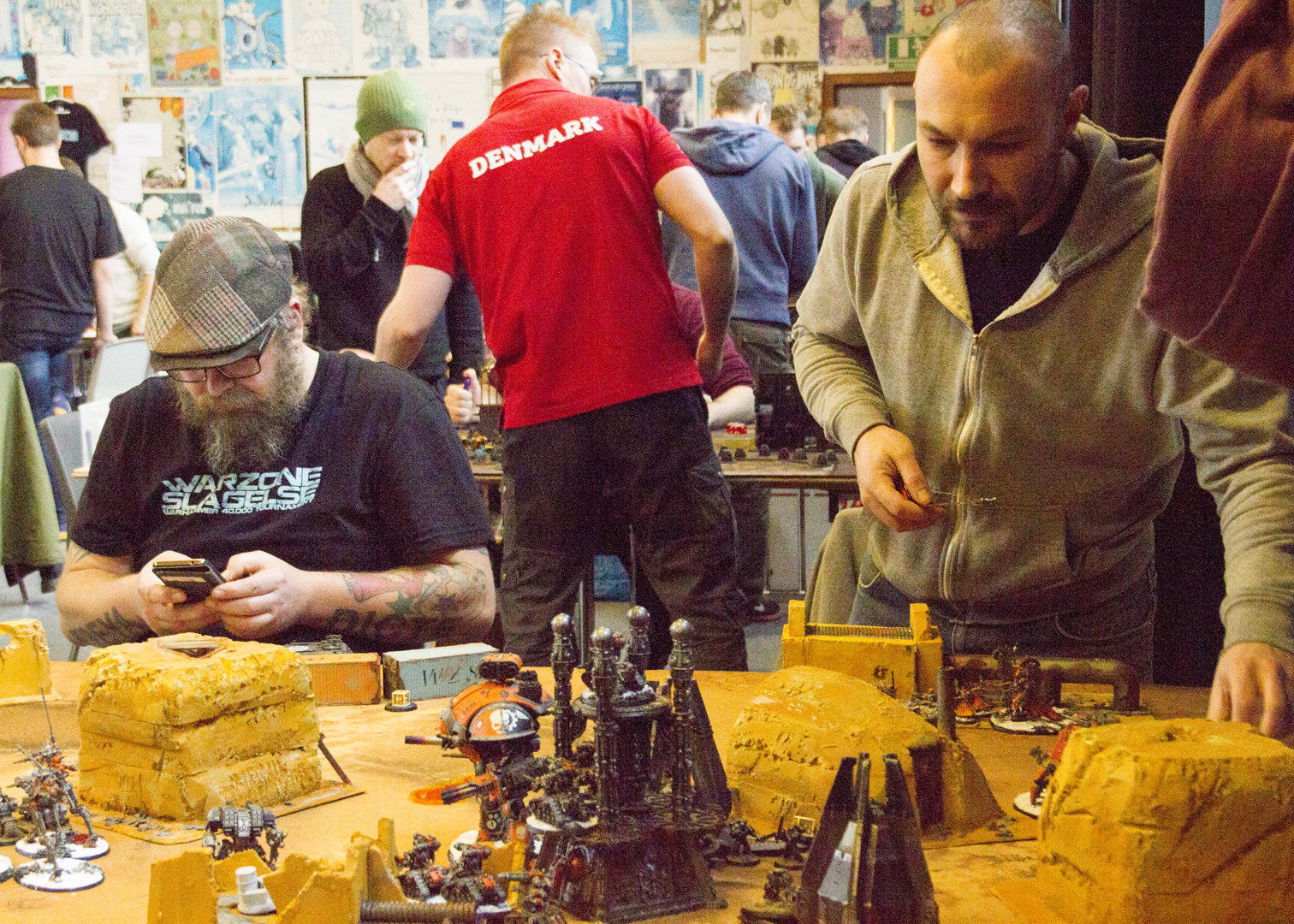 We chose ITC because we believe in the idea, and we feel like it appeals to a broader audience than for example, ETC format. ETC is very popular in Denmark as the competitive scene is very small and traditionally centered around the ETC team. The change of format, however did not stop the ETC players from attending as they deep down have a love of competitive 40k gaming and social aspects like drinking “Arne”. 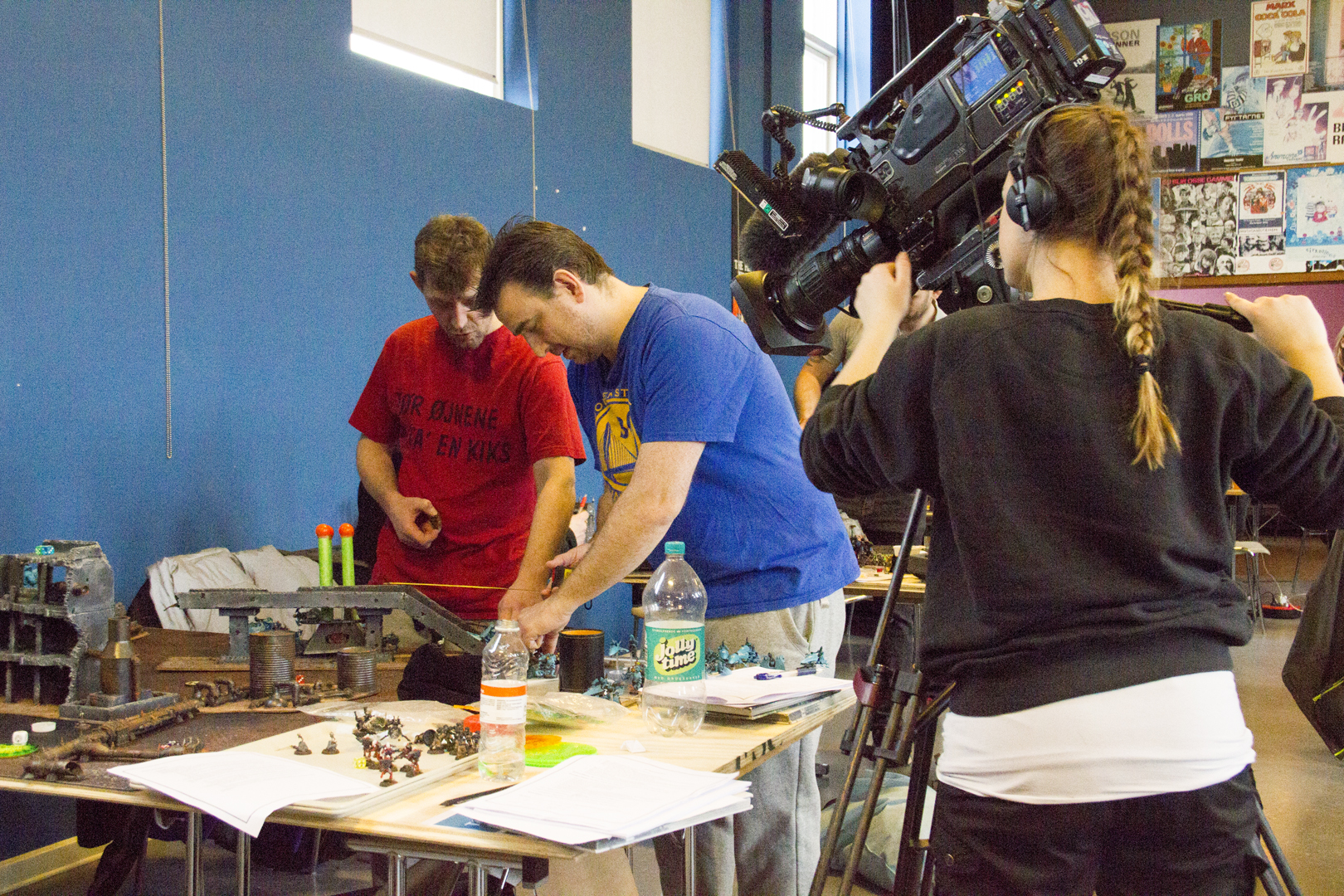 Within a few short months we had sold our initial 50 spots out, and opened up for 10 more, taking us to 60, we almost had those sold out too, but there was some cancellations due to people wanting to go to Las Vegas the weekend before our event, for some reason.’ 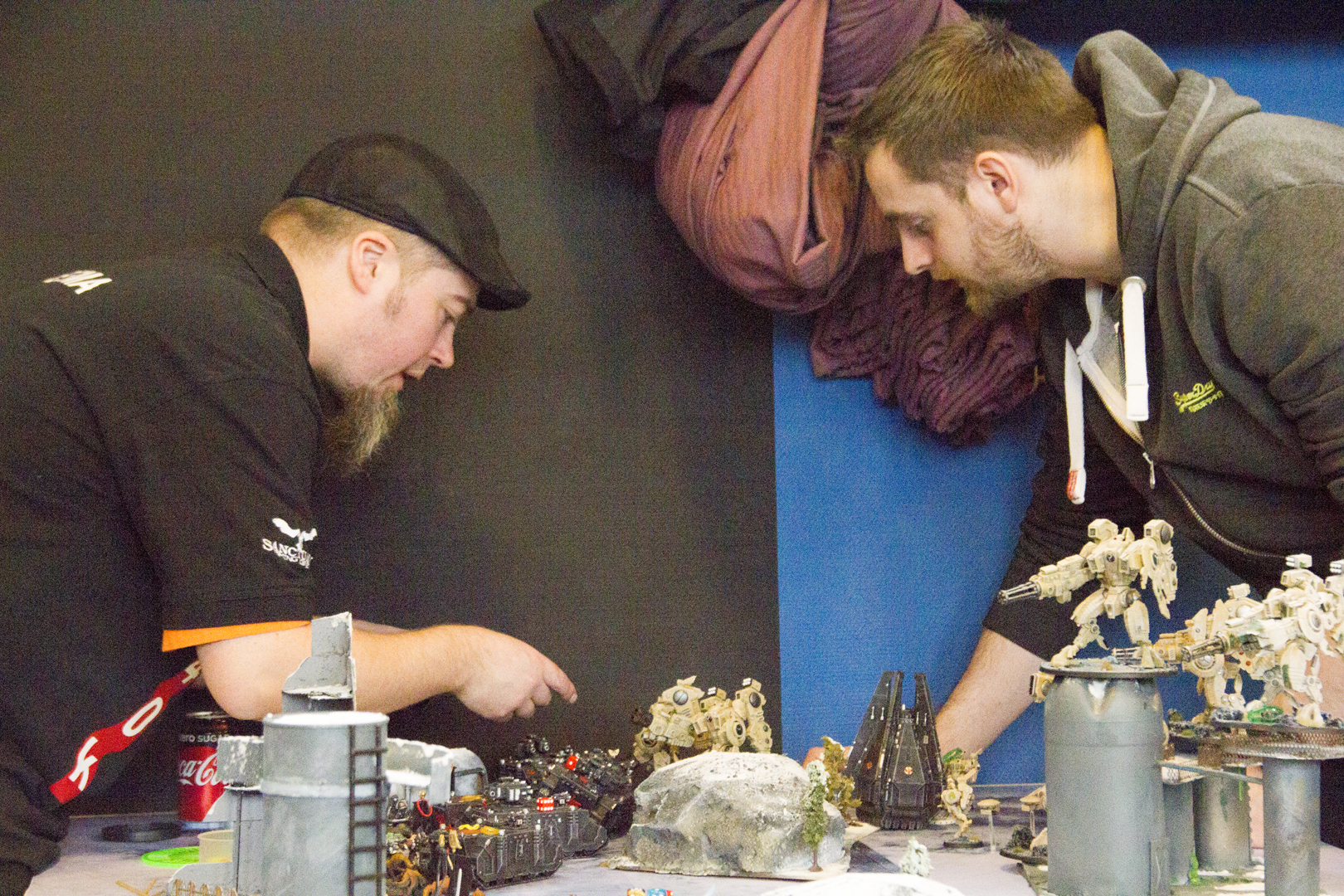 With all of that came the terrain building, the nemesis of every TO. Right from the start we agreed that we wanted distinct themed tables, and we wanted lots of terrain, that looked good, but was functional in the modern 40k game. We were inspired by the No Retreat tournament in Gibraltar, they always had fantastic terrain on every table, and we felt like it added a lot to the game. 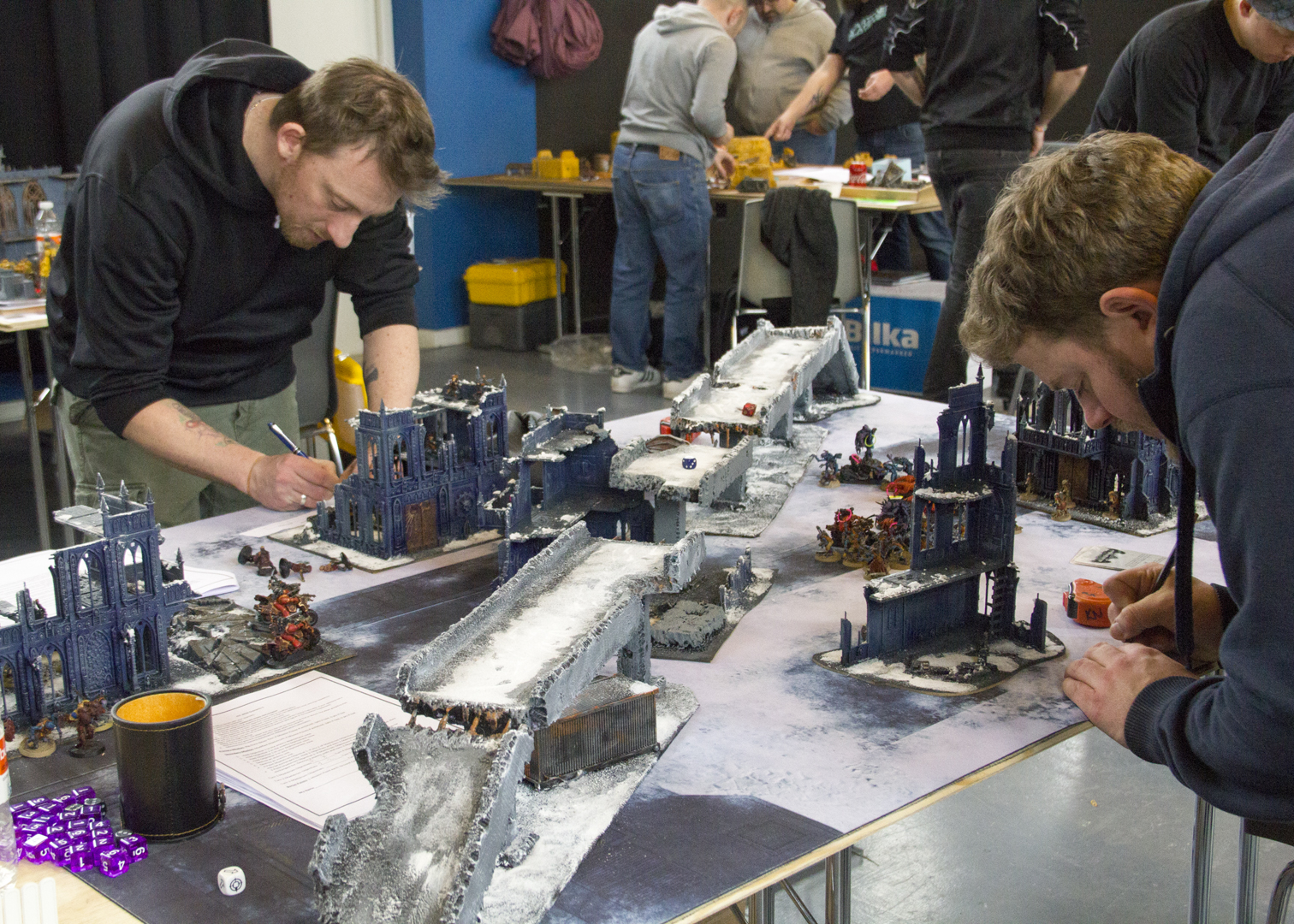 We overcame the terrain building by organizing all of the terrain into each table, we picked up what we had, repurposed what needed it, and allocated every piece of terrain to a certain table number, along with a playing mat. When the terrain was all finished and ready to go, we packed it into a cardboard moving box, wrote the table number on it, and on the sticker for the mat. And then it was moved away, to be opened again the day before the tournament. All of this information was stored on a google sheet, that each of the guys working on the terrain had access to. This enabled us to coordinate our efforts, and by February 1st, all of our tables was in the green. It also helped us not getting too stressed about it, and the organization was at the same time groundwork for next year. In total, we ended up making 20 tables worth of themed terrain. I can recommend our method to anyone wanting to take their RTT to the next level. 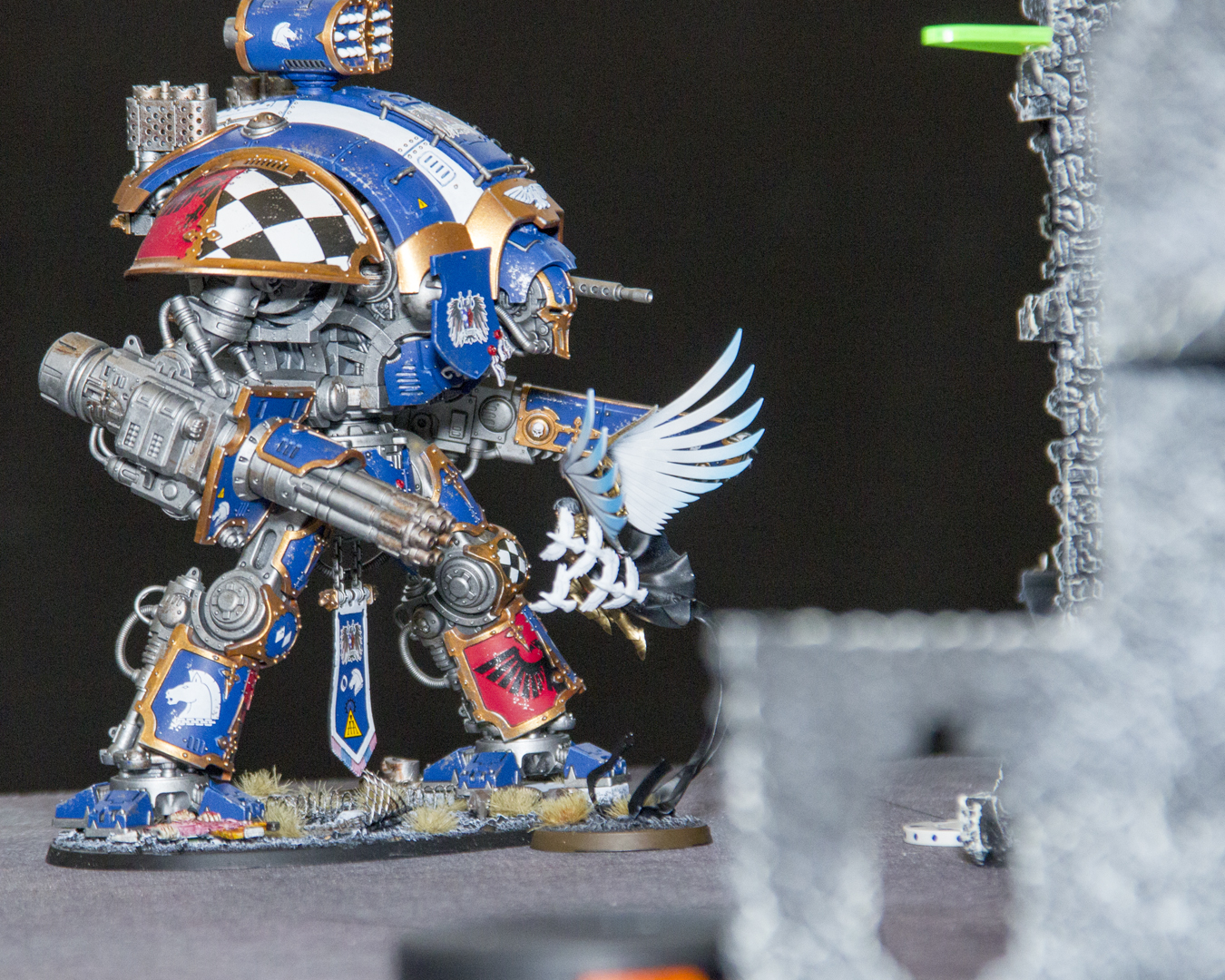 As we came to the day of the event, 48 people showed up, ready to play, almost all of the armies were fully painted, even though we didn’t have a requirement for it. People in Denmark are apparently die hard hobbyists as well as competitive gamers. We ran with the program called tourneykeeper, that was created by fellow Dane Michael Bræmer, one of the regular ETC players, we knew the program to be stable, and we had support on site, as we offered up a free ticket for him in recognition for his work. 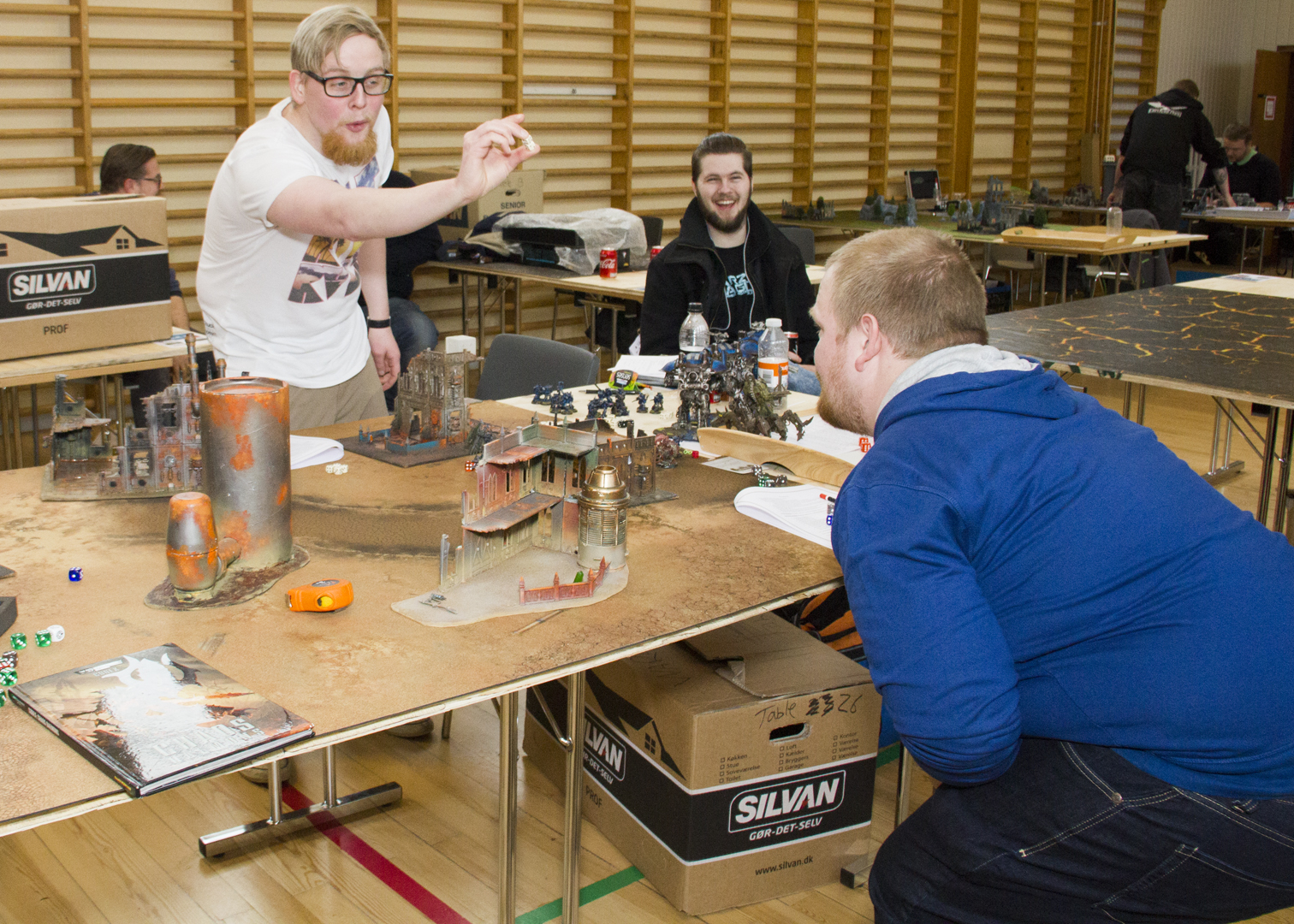 The event ran smooth, me and Sander were playing in the event as well, and I was a playing head judge. I can only think of one really serious rule call I had to make, and the rest were mainly concerning terrain. Me and Sander felt we had enough time to bounce away from games and go handle stuff, from making sure food was delivered, and greeting the local news team that came by and filmed a segment that got aired on Sunday. That was very cool! 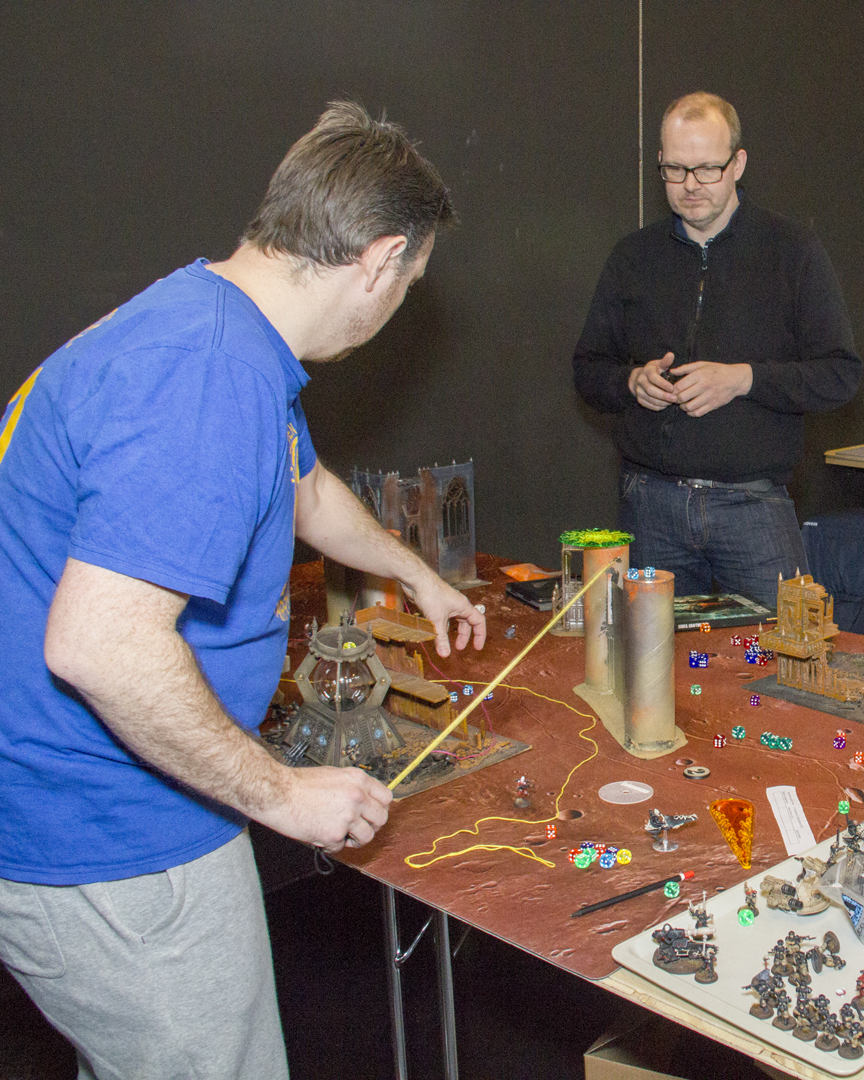 We had the general feel that everyone was enjoying themselves and having great games, and speaking of games not finishing on time. We had a couple of games we let run into the food breaks, what I did was go up to the tables and tell the players, ok guys you can go a half hour into the 1 hour food break, if both of you want to. This worked just fine, with 3 hour rounds on the clock, almost every game finished on time. 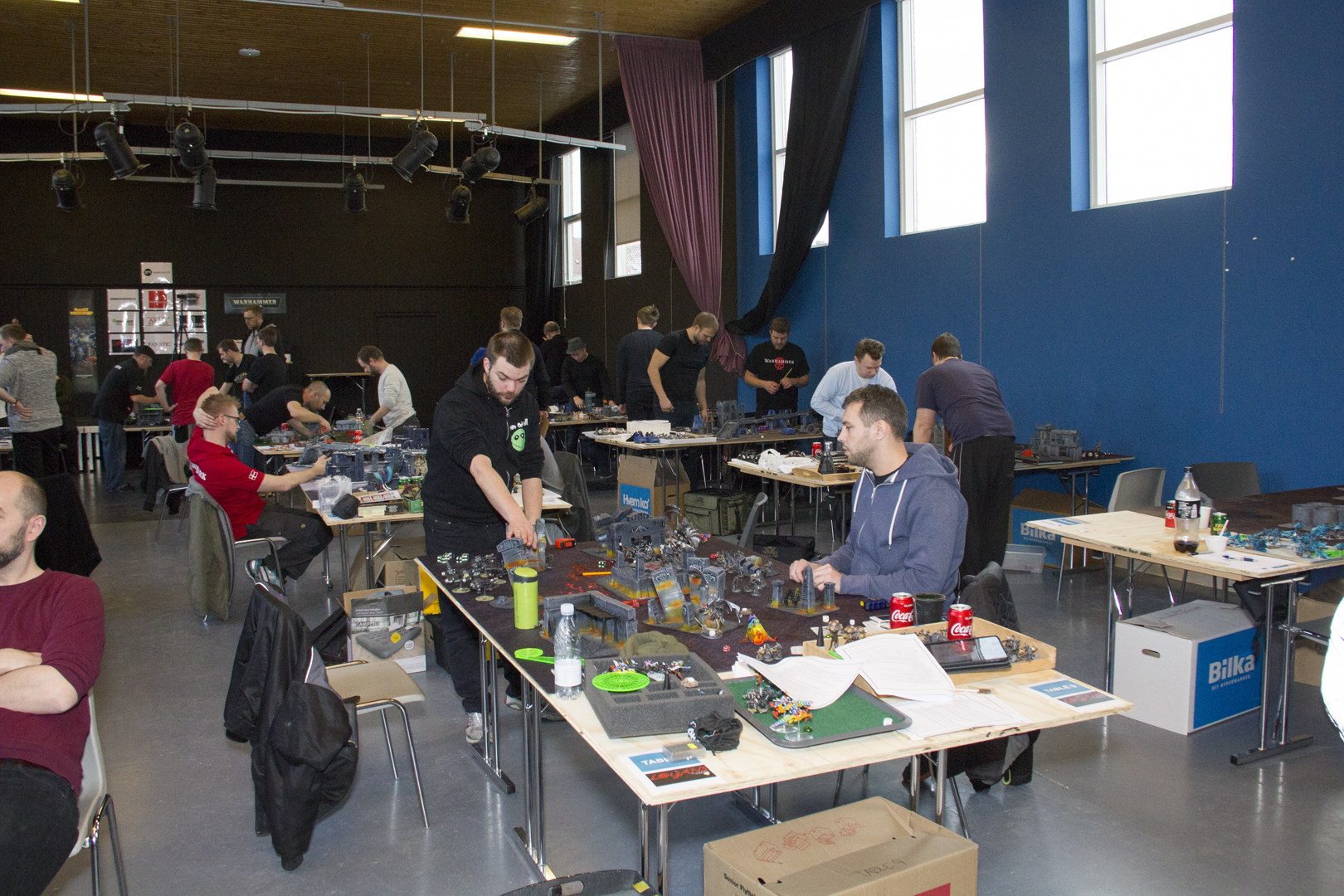 At the end of round 4 there were only 2 players left with 4 wins, one was Alexander Dzougov and Thomas, both of them highly skilled players. Alexander was on the ETC team a couple of years back, and Thomas is a well known competitive player, coming in as best overall at nova open a couple of years back. He is also considered the anchor of the Danish ETC team that has done very well over the years. Both of them were playing Eldar, and the game was by their account incredibly close. The win came to Alexander who with a mixture of luck and skill pulled the victory out. He ended up winning an airbrush starter kit, that he probably don’t need cause he is also a skilled painter. Thomas repeated his Nova open win, by getting best overall. 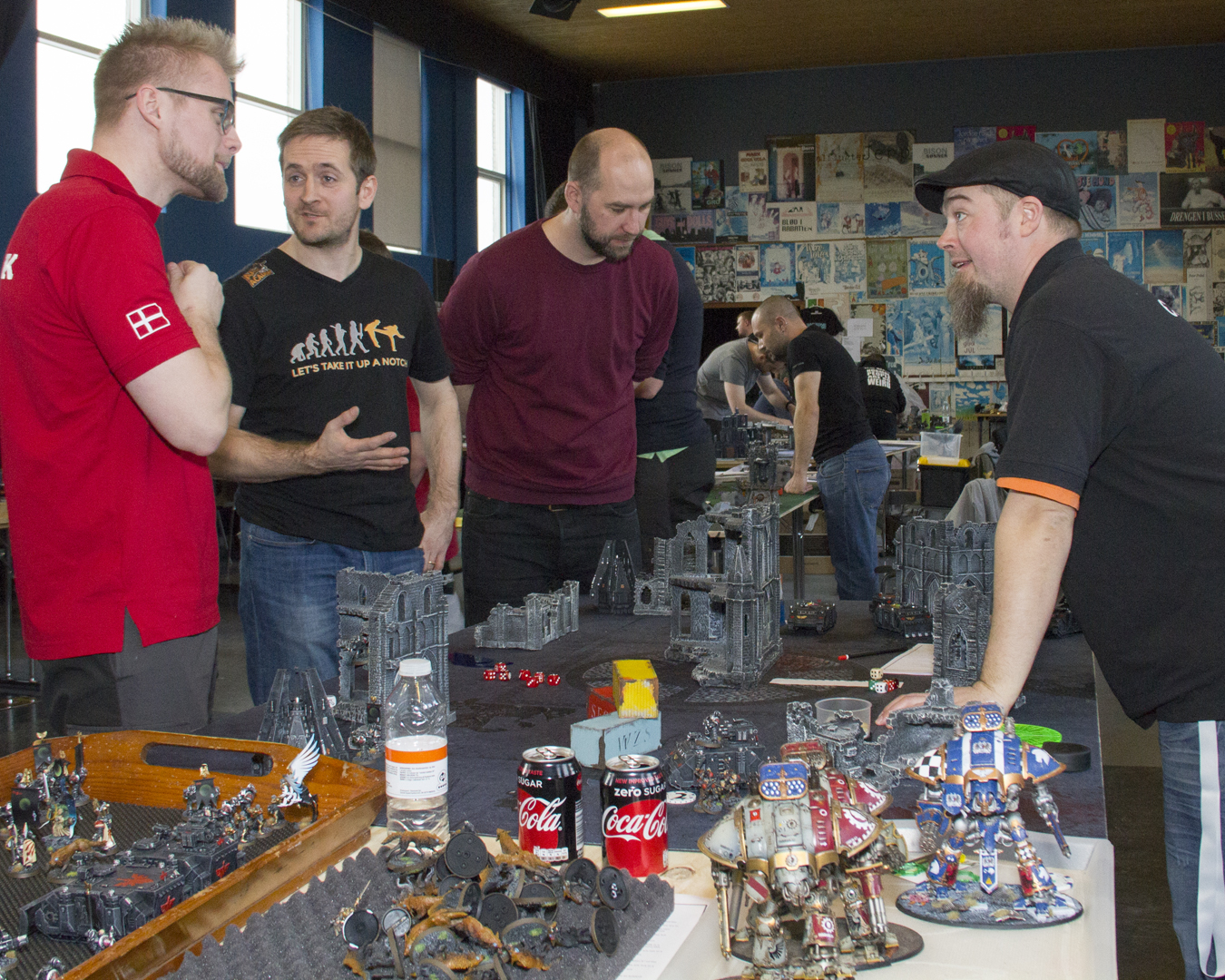 We had prices for best sportsmanship, best newcomer, last place and best painted and Kromlechs peoples choice. Best painted and Peoples choice went to an ork player that had the largest ork army that was all converted and custom built. It makes us wonder if Kromlech decided to support us because Uffe (the ork player) came to the event, as he must surely account for 50% of their revenue. Last place was a brand new copy of The Gathering Storm – Fracture of Biel Tan, signed by all of the players plus a pot of quick shade. 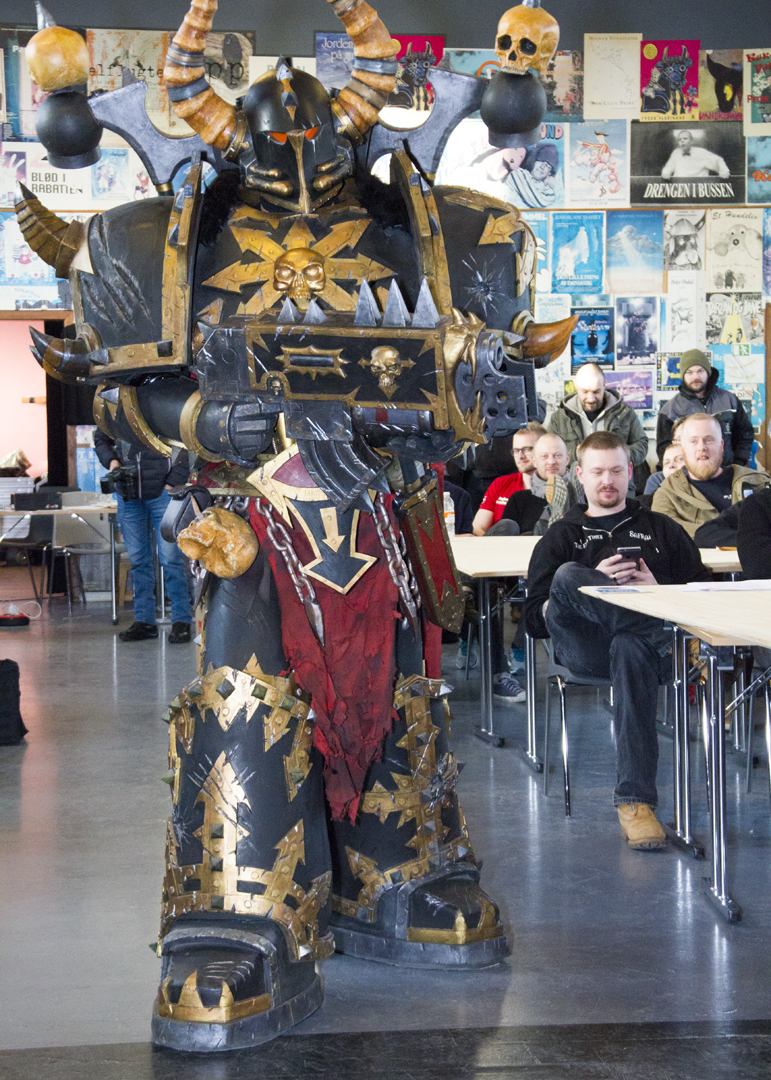 Now, exhausted after a great event, we are already looking forward to next year. We really want to grow the event, and bring in international players. We have a feeling that the new regional ITC rankings will help us do just that. And we look forward to 2018. Right now we are looking at venues for 80 players. 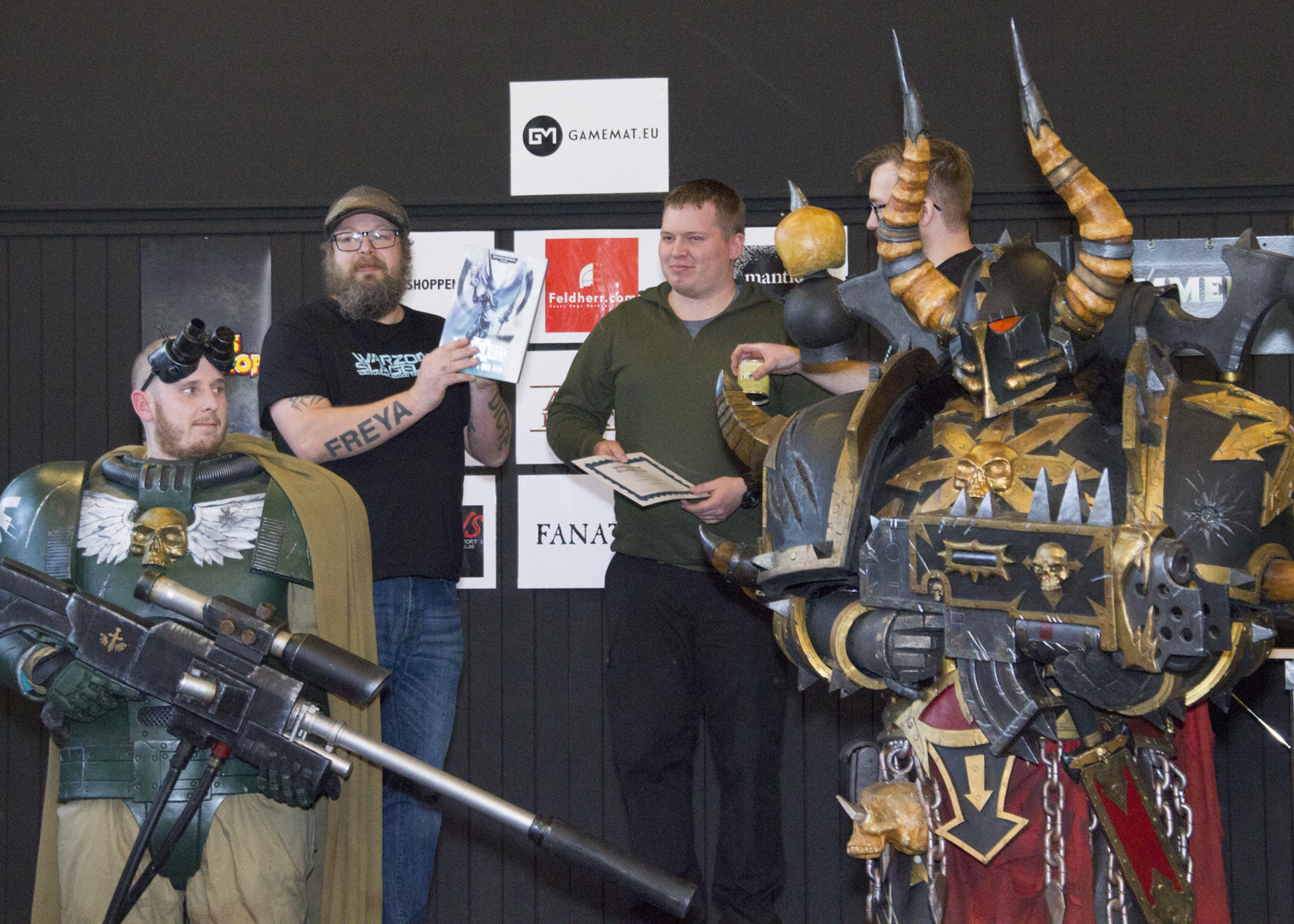 Now, the logistics for running a GT instead of a 1 day RTT, is certainly more advanced. But at the same time, if you do your prep properly, the actual work on the day of the event, is more or less the same. You just push out the tear down time, to the next day. Add in some food, or don’t, and there you go. We did end up having time to set up Livestream, getting a photographer, getting some very very tall dudes to come to the awards ceremony and loads of other stuff. Needless to say this would never have been possible without the support and help of our club. The volunteers were the lynchpin of the event. A little advice to a future TO reading this. Take care of your community, and they will take care of you. Running a 40K GT is a team effort, very much like most things in life. 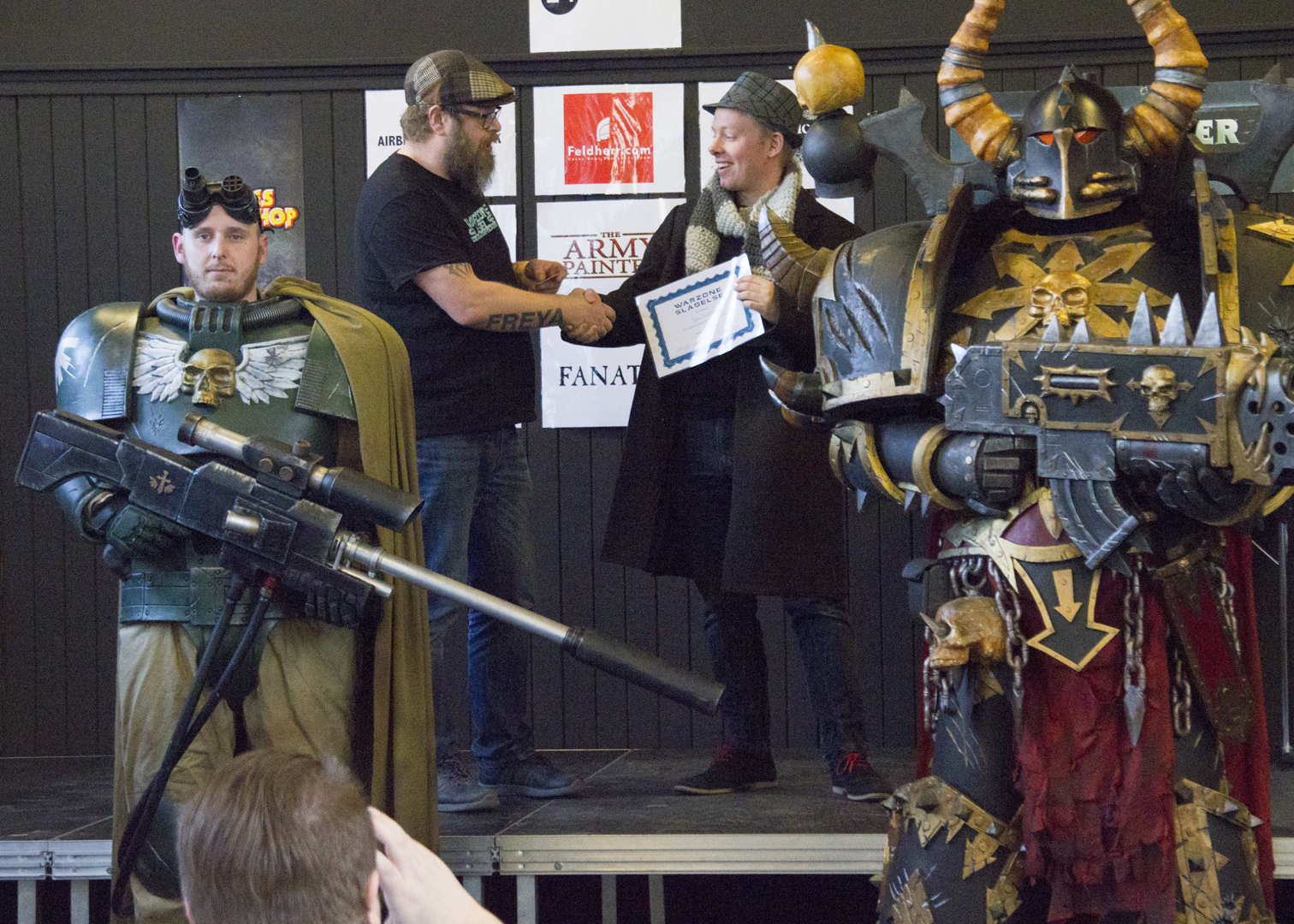 But making the leap from RTT to GT is very much worth it, just the look on the players as they leave the event is more than enough.

The team here at Warzone: Slagelse is looking forward to 2018, and possibly joint ventures in Season 2017, we hope someday that we can come to LVO, it has inspired us to grow our event, and the entire competitive 40k scene. Thank you for reading and enjoy the photos below.

TO of Warzone: Slagelse GT 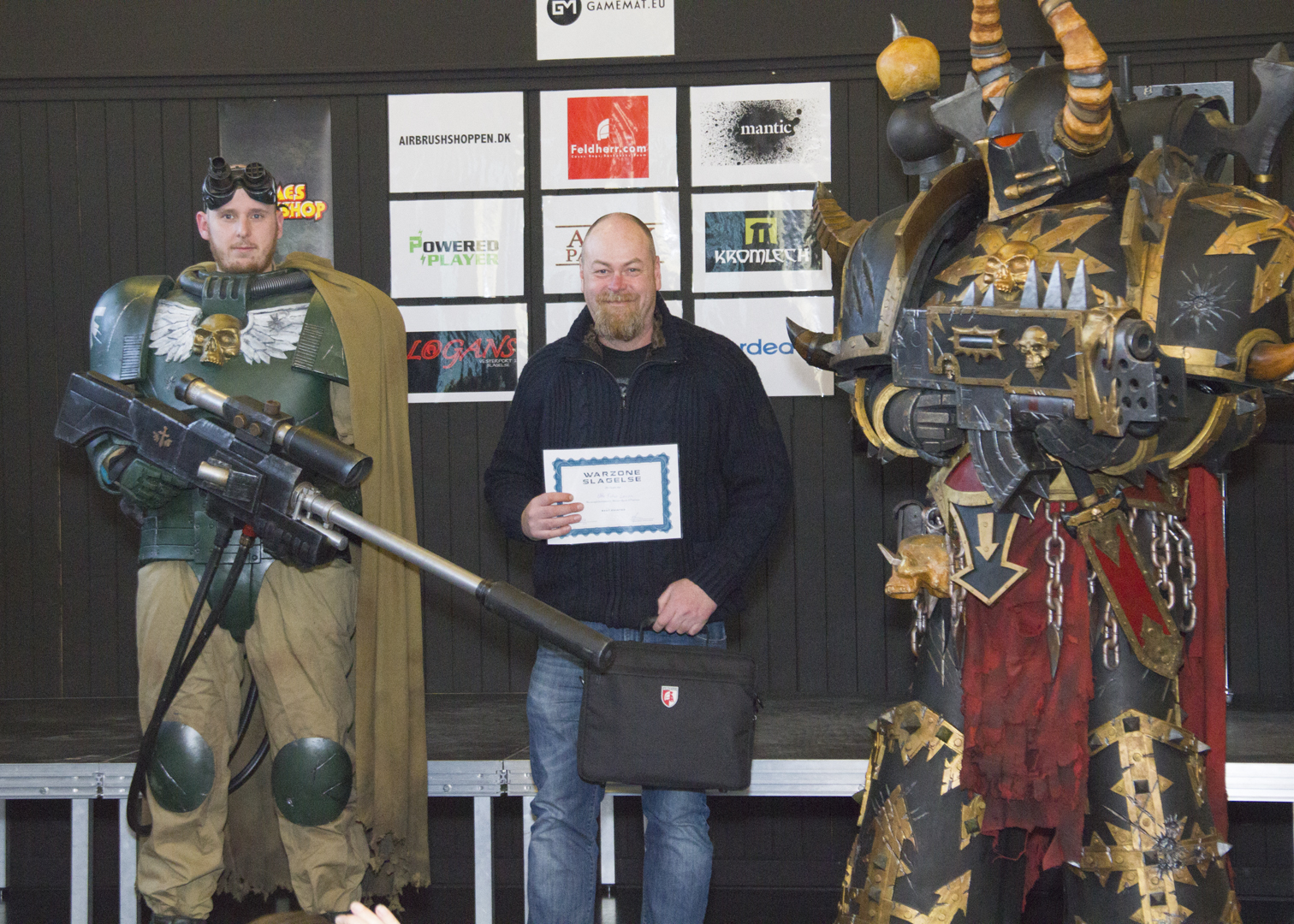 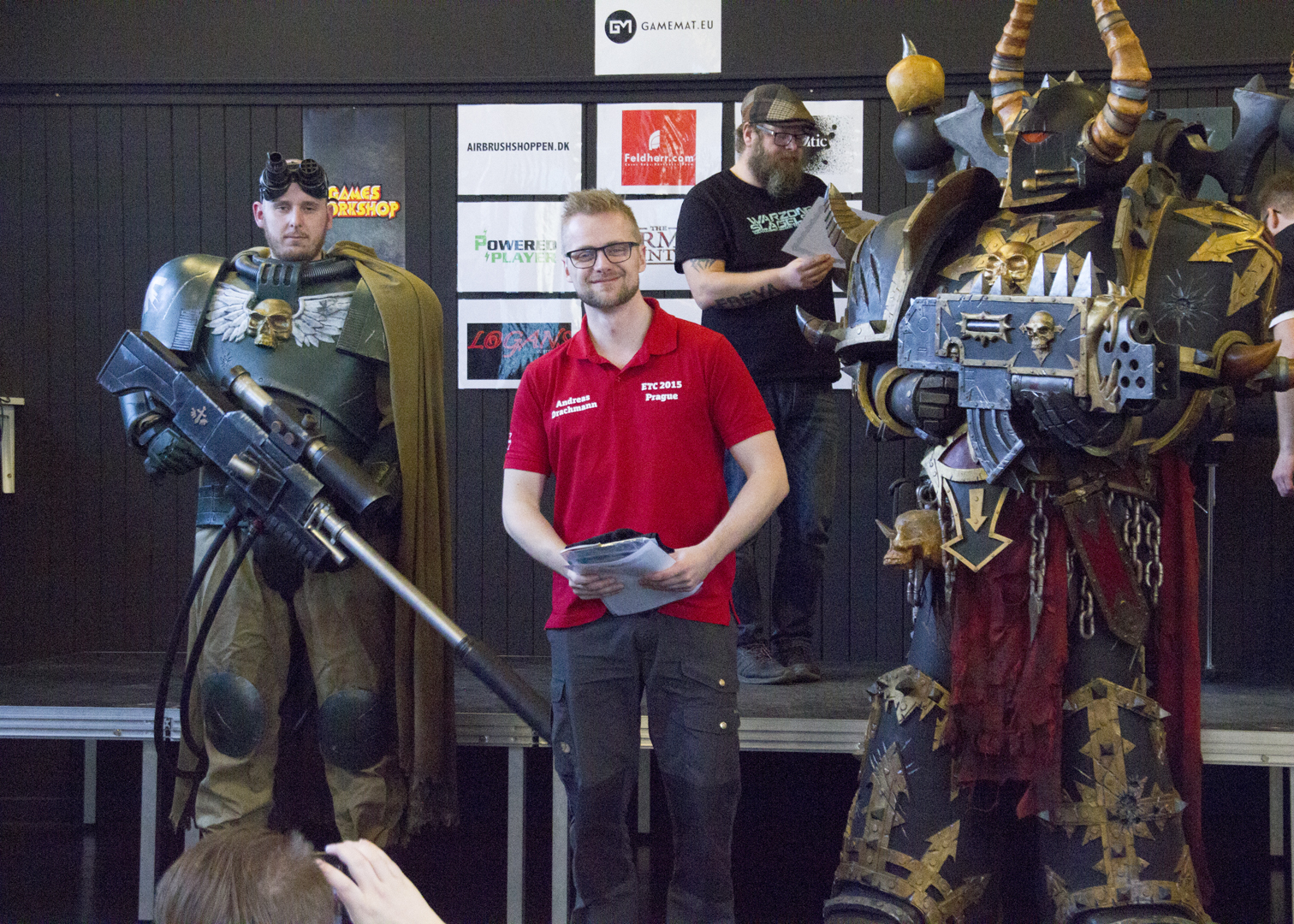 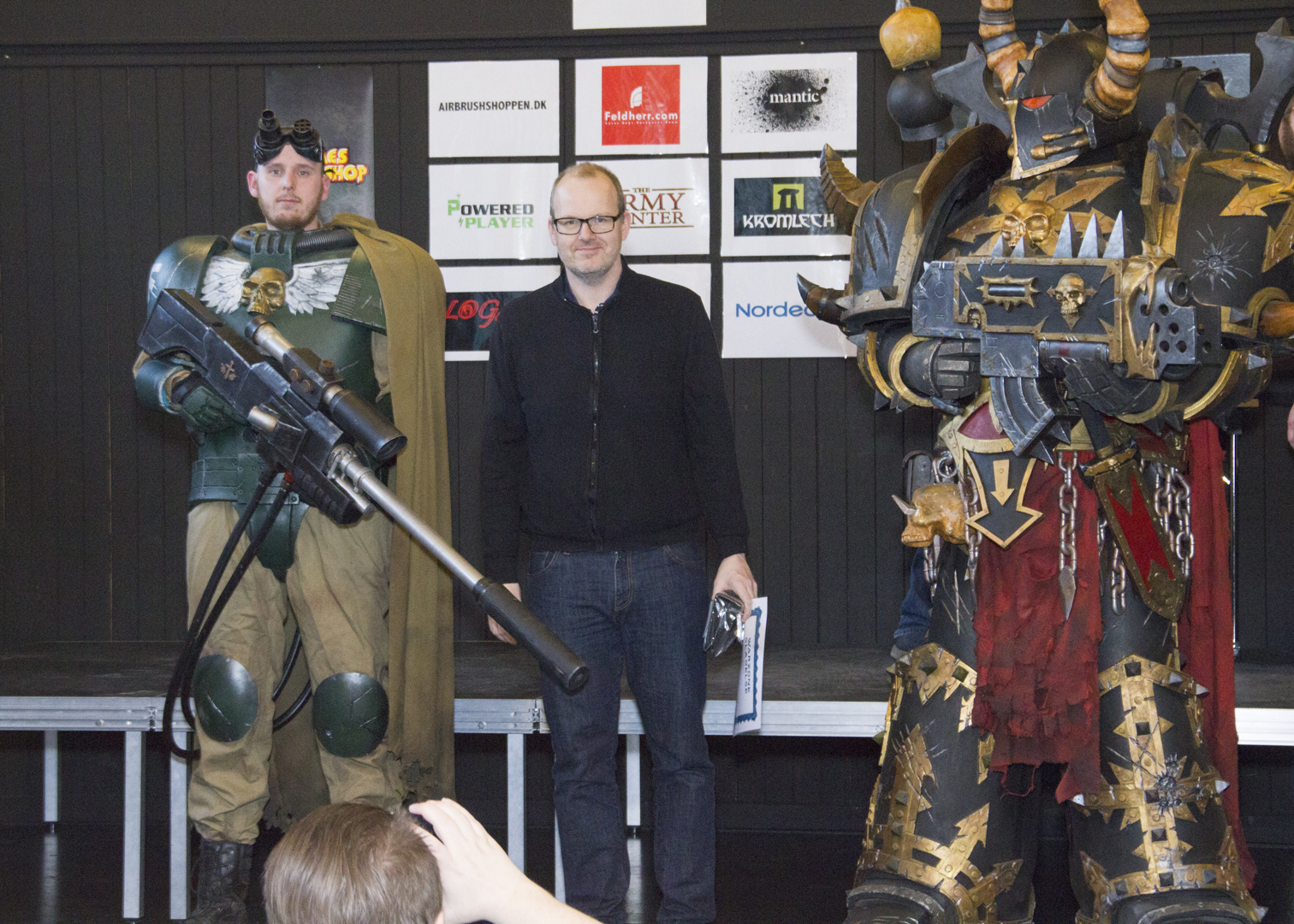 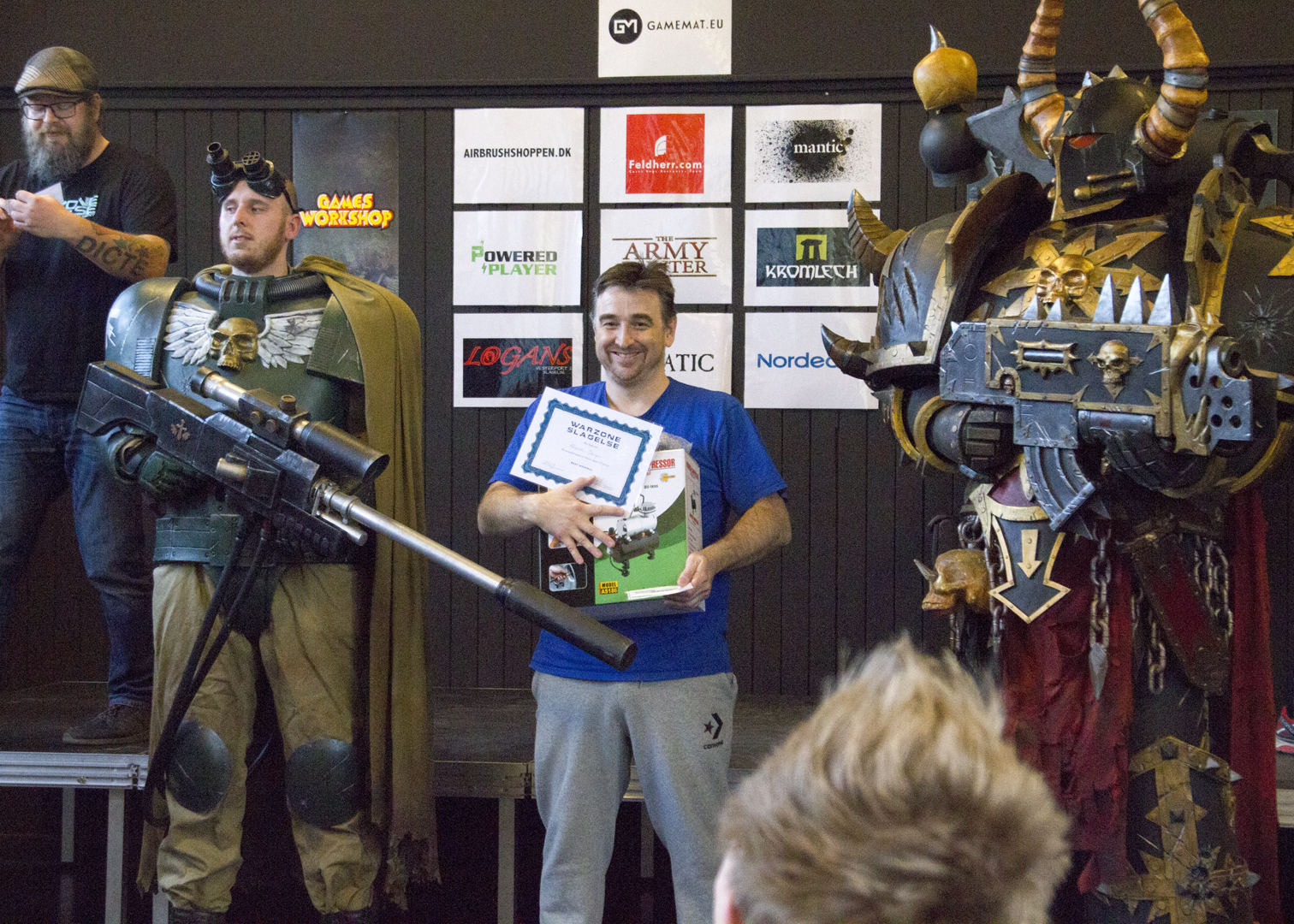 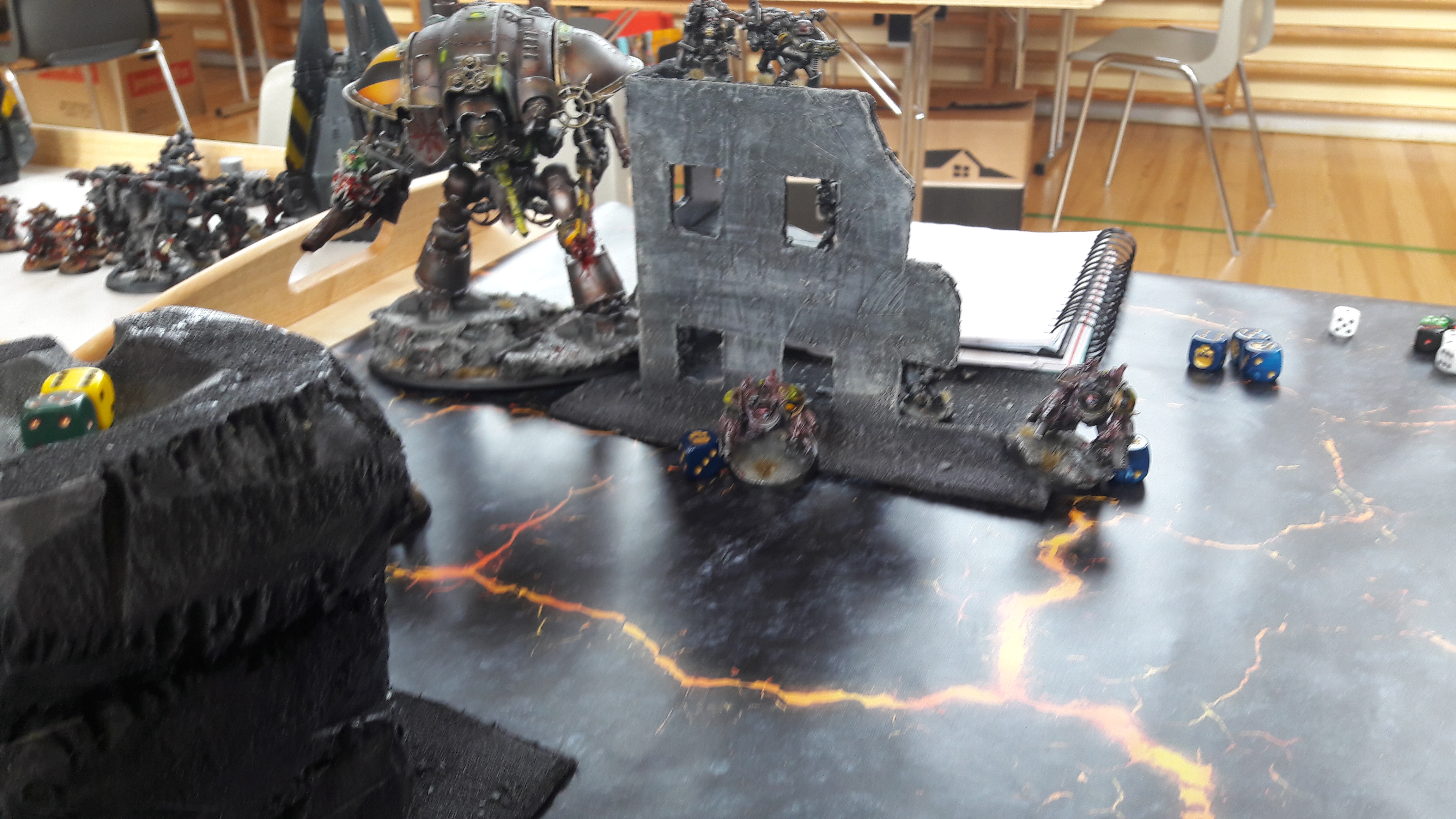 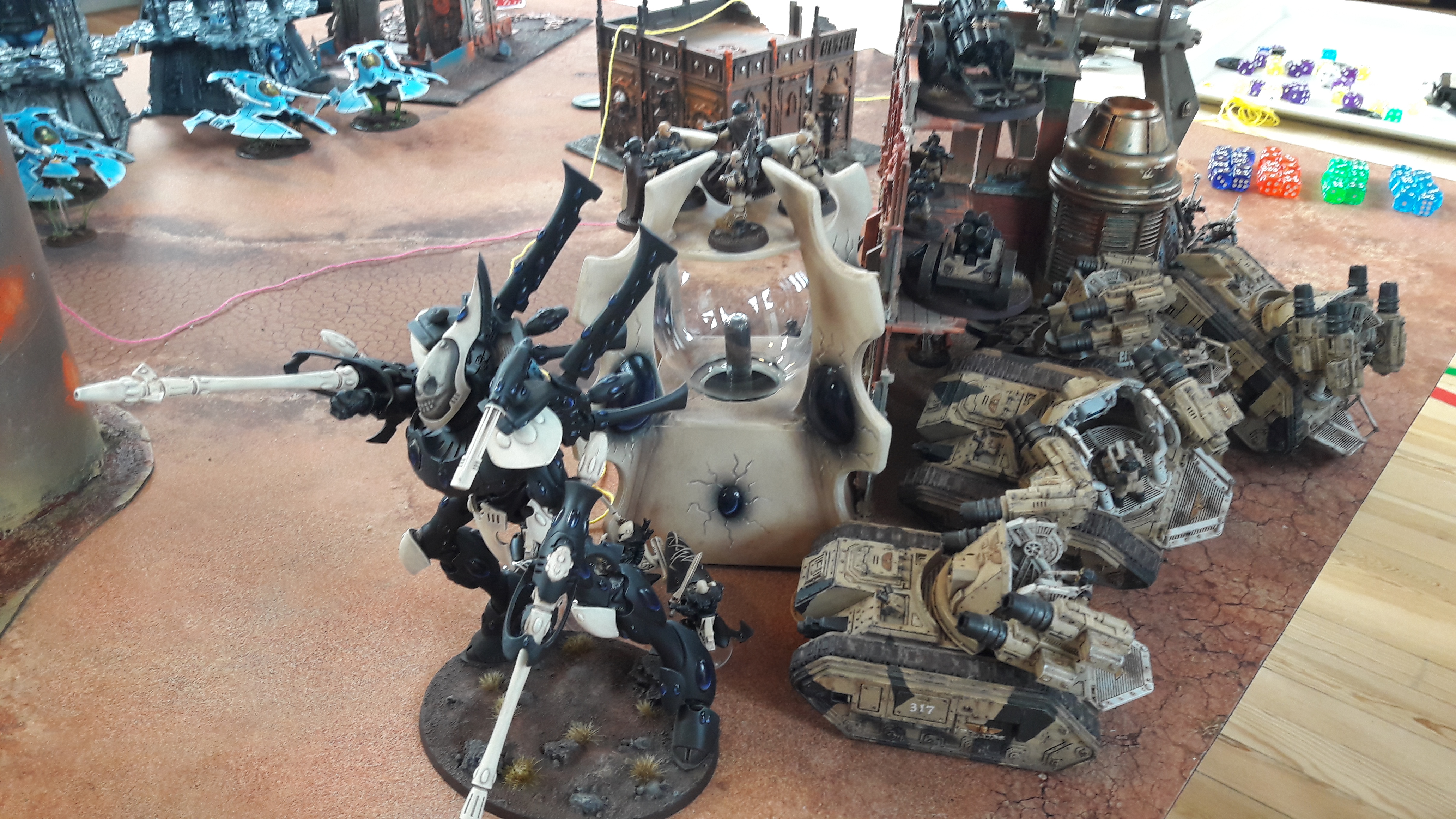 5 Responses to “Warzone: Slagelse GT Recap – Making the leap, and why it is worth it.”