Hello everyone, Danny here from TFG Radio to go over the last in the Tyranid Codex troops section, the littlest of the little, the tiny, the mighty, the Ripper Swarm! As you probably already know, you should check out Frontline’s Tactics Corner for all your tactical needs.

The Ripper Swarm is the ideal objective camper with a small footprint, decent amount of wounds per point, and the ability to show up anywhere. Like all little bugs, they can also be upgraded to bring a bit more heat. 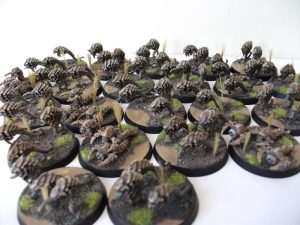 The unit may also purchase The Deep Strike special rule.

So Ripper Swarms don’t come with any equipment or biomorphs, so they are as naked as can be. This makes sense as they are meant to be just a wave of small, worm-like creatures designed to eat every piece of biomass possible. You can actually give them a gun, and they are one of the few Tyranid creatures that make decent use of Spinefists as their base 4 attacks gives the gun Assault 4, and the twin-linked means that their BS2 is not as much of an issue, giving them a slightly better chance to hit than BS3. With Toxin Sacs, their S3 isn’t a big deal, and 4 attacks (5 on the charge) gives them some decent hitting power. Adrenal Glands speeds them up and maybe gives them S4, so you could have a decently scary unit, but then these upgrades do not come cheap at all.

The real secret sauce is Deep Strike as Nurglings will tell you how awesome Deepstriking, Obsec swarms can be. Being able to land three bases onto an objective in the late game or in a far-flung corner of the table is key to winning many a mission, and Rippers can do it well. If you really want to give them some shooting, Spinefists aren’t terrible, but even 12 S3 twin-linked shots isn’t all that damaging.

If you are trying to use Ripper Swarms as a tarpit, cheaper is better, so most of these options can be ignored. Deep Strike should always be considered though. 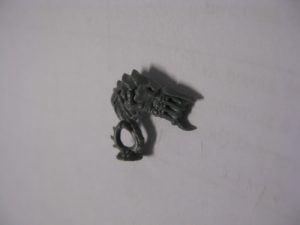 Yes, that is a Ripper with a Spinefist.

So our little bugs have the unfortunate problem with being saddled with the worst IB, but with often only 3 models in a unit but 3 wounds each, they won’t damage themselves as much as Hormagaunts can. Swarms means that these little guys are super vulnerable to artillery spam or even a standard flamer, but at least they are Fearless, so you can use them as a tarpit without having to worry about Synapse nor will they ever fall back and stop counting as scoring.

Yes, there isn’t a huge amount to say here, but it is important to see that Rippers have two rules working against them, so always keep this in mind.

So, what do with these little ones?

The most common and effective choice is to use them as minimum troops in a Flyrant list instead of Mucolids. While this is more expensive and you get less wiggle-room in the Flyrant build, you can also get 2 to 6 Obsec, deepstriking objective stealers. For 5 points more than a naked Termagant squad, you get 3 Ripper bases with Deepstrike that can pop in, claim a maelstrom, and then hopefully hide out of LoS, which is far easier to do with 3 bases of not very tall models than 10 bases. A minimum squad of 3 pumps out 12 attacks base, and while only at WS2, S3, and I2, this is still enough attacks to bring spikes that could potentially tie or even win a combat against other small, objective campers. As they are innately Fearless, you don’t need to worry about Synapse as much, especially if they are in a slow melee derp-fest. Especially since the standard competitive Tyranid list lacks a lot of ground control, these little bugs can be game winners.

Of course, if you have a ton of these little guys and don’t just want them to be used as objective campers, can you make them work in larger swarms? You can take up to 9 in a unit, which is 27 wounds and 27 attacks base. That’s not entirely bad, especially with the option for Poison. For the same cost as an Exocrine, more or less, you can have 9 Ripper Swarms with Poison that Deepstrike. That is suddenly a lot of wounds (with a much smaller footprint than Gants) hanging in your opponent’s backfield, and 27 (or 36) attacks that wound on a flat 4+ can catch people off guard. Again, keep in mind that they are Obsec as well. This is the cheapest way for a Tyranid to guarantee backfield disruption with near to 30 wounds in the unit to do it.

So why aren’t these little ones far more common? Well, Scatbikes exist. Actually, a lot of things exist that just make Rippers sad little teeth-worms. As they are only T3, any S6 wound is going to pick up a base at a time, and as they are swarms, blasts and templates have a field day. Renegade Artillery spam, regular old AM artillery spam, even a thrown Krak Grenade can do some serious harm to the unit, and Rippers really can’t hang with all of the high strength weapons out in the world, not to mention the many blasts and templates that a lot armies cart around. They are certainly capable of absorbing some small arms fire or some middling close-combat wounds, but there is too much heat in the world today for these little guys to be out and about.

In close-combat they are safer, but S8 is not at all uncommon in melee and neither is S6, so these little bugs are still very squishy. While they can ignore grav, there is too much standard shooting and melee that really threatens them, and so they are not at all survivable enough to be taken in any real concentration. They are also slow as after they Deepstrike, they are just wiggling their way to through the battlefield, and that’s just not fast enough to have them matter. As a general tarpit at the center of your army, they are too slow to really get a good position to screen effectively as you advance. For this, they aren’t really well-suited to the tarpit role as they could be, so you are often better off with Termagants or Hormagaunts.

They have a bit of missed synergy with Lictors as one would think Lictors would be great for guiding the little worms to their location, but as the effect is only within 6, and the Ripper Swarms want to land on objectives, why do you need the Rippers there if a Lictor is close enough to go take the objective? I suppose if you really need the Obsec, sure, but for the most part, Lictors want to be guiding in distinct threats, not backfield campers.

Do these little swarms have a place in a competitive list? Absolutely as they provide a viable alternative to the typical Mucolid in most competitive lists, but they do mean less points for some of the other trimmings. Running Flyrants plus Rippers is essentially the entire army itself, but Rippers do add something that the Flyrant build sorely needs.

So that’s it for Troops everyone, and brace yourself as I’ll start my way into the coveted Elite sections of the Tyranids codex to look at some of the winners and losers of the faction. As always, check out TFG Radio.

← New Faction for Hordes: the Grymkin
The Ninth Realm Episode #32 →

Leave a Reply to Hiveminded