A review of the XV8 Crsis Bodyguards for Tau. 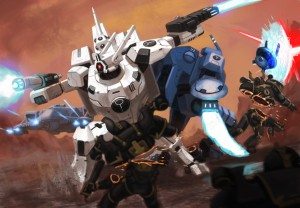 Crisis Bodyguards are all but identical to their standard XV8 Crisis friends- they have the same statline and options in almost all cases, with the caveat that all members of a Bodyguard team get the 10pt upgrade to become a Shas’ui and thus have an extra pip of Leadership and Attacks in the bargain. (They are not, however, all characters.) As they occupy the same slot as standard Crisis do, this makes them a bit of an odd choice since they don’t have many unique options to draw the eye and are significantly more expensive than their brethren. Still, there are some possibilities in there, even if they aren’t always the most exciting. 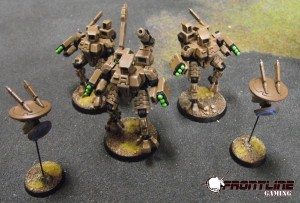 As already mentioned, Crisis Bodyguards have all of the same options as Crisis suits do- as such, I won’t be talking about those here, since they’ve already been covered in depth in the review linked above. Feel free to browse that article if you’re looking to outfit a Bodyguard team, with the caveats listed below kept in mind as well.

Bodyguard units benefit from all of the rules normal Crisis do, but have one special rule of their own- Sworn Protector. Independent Characters in a Bodyguard unit will pass Look Out Sir! rolls automatically so long as at least one Bodyguard is alive, and unlike many units with similar rules they resultant wound will be reallocated just as normal- so keep some Drones nearby to soak up the wounds from your Commander or Ethereal if you’re gonna join them to the squad.

Crisis Bodyguards also pay an extra tax on Bonding Knives, getting charged 2pts/model for them rather than the 1pt that every other unit (even MCs!) in the Tau codex pays. I’m not really sure why this is the case, since they don’t have any obvious advantages of being Bonded compared to other units, but such is the scattershot nature of much of GW’s design.

However, far and away the most useful and important feature of the unit is that every member of the squad is able to access Signature Systems (i.e. relics) and unlike the squad leader of a Crisis unit these items do not occupy the battlesuit’s weapon/support system slots. This means that Bodyguards have access to a wide array of upgrades, potentially from both the Tau and Farsight codices simultaneously, and can add them to their normal selection of gear for a truly staggering panorama of possibilities. 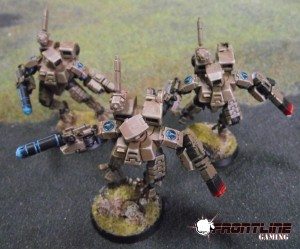 So what good are Crisis Bodyguards, anyways? Well, for anyone keeping up with the tournament scene the answer of “not a lot” probably won’t surprise you- that 10pt tax you pay above the normal cost of a Crisis (themselves not particularly cheap) for very little benefit means that almost no one will bother taking a unit of Bodyguards, especially not as regular suits can so easily be accessed as Troops in order to alleviate any possibility of crowding slots. Add in the fact that Bodyguards aren’t a mandatory inclusion in almost any of the Tau detachments and you have a recipe for obscurity.

Let’s be clear here, though- Bodyguards aren’t actually awful, they just have very little reason to exist. If Crisis vanished from the codex tomorrow then you would occasionally see people use Bodyguards in their place, albeit slightly less often because of the higher price tag involved. But if you feel the need to field them for fluff reasons then you aren’t going to be excessively punishing yourself.

But maybe you’re looking for uses outside of that- maybe you want an actual reason to use the unit. Well, that’s not completely impossible; as already mentioned, Bodyguards have the advantage of being able to take as many Signature Systems as they please, and many of the Signature Systems are both relatively cheap and fairly useful (or even excellent), so you can get some mileage out of them. The most obvious choice here is the Puretide Engram Neurochip, which can give you any of several special rules for a very low price. Bolt one onto a Bodyguard team member and suddenly you’ve got a unit that is great against tanks or MCs- while normally the upgrade would be the provenance of a Commander, for Tau lists that aren’t fielding one a Bodyguard team can be a usable way to sneak one into the army anyways. Similarly, the Neuroweb Disruptor can make life difficult for enemies that get close to you (such as by DSing) and the Onager Gauntlet lets you make a surprisingly dangerous melee attack.

The fact that the Signature Systems don’t take slots on the unit also means you can take the usual “support leader” (Multispectrum Sensor, Puretide Chip, Command Node) and give them several of the buffing-oriented Support Systems as well, such as the Drone Controller and Vectored Retrothrusters. As these systems would normally need to take space on one of your other suits (thus denying them either one of their two guns or the option to take a Support System of their own, like the ubiquitous Target Lock) it can up the functional firepower and utility of the unit by a significant amount. 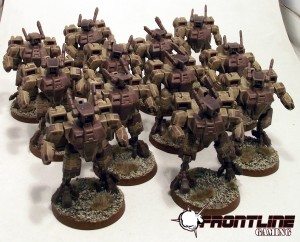 You aren’t likely to start seeing Crisis Bodyguards in your local tournament scene anytime soon; the 30-90pt tax on the unit is a significant hurdle to overcome and the benefits of not failing that one-in-six LOS roll or getting to slide in an extra relic or two in certain circumstances are simply too niche to really attract a lot of attention. But for all that the unit isn’t awful- for all the quirks and oddities of the Tau codex, that much can at least be said about almost all of its units.
And as always, Frontline Gaming sells Games Workshop product at up to 25% off of retail, every day!