Ibushi back from the webway, today we’re looking at another space pirate unit – the Corsair Balestrike Band. These boys are where FW lets you keep using those awesome Corsair heavy weapons troopers that are no longer valid as troops choices. Read on to find out what these pirates can do, and be sure to check out the Tactics Corner for more great articles.

Apparently the cousins and in-laws of wealthy Corsair Princes and Barons (so that they don’t turn their guns against the leader’s back), Balestrike Bands are the devastators of the Corsair army, providing covering fire for pirate raiders and taking out key targets at range.

Balestrikes have the same points and stats as Corsair Reavers (which are Guardians with blind grenades), rocking the standard WS/BS 4, Strength and Toughness 3, Initiative 5, Leadership 8/5 (Dancing on the Blade’s Edge), and then 5+ armour for 10pts/model. Of course they can also take Corsair jetpacks for 5pts/model to get that sweet combination of 4+ armour, Relentless, huge Reckless Abandon moves, assault thrust moves, and Deep Strike. Deal! In fact this is probably the best deal for any Corsairs unit, thanks to Relentless. Alternatively they can take Heavy Mesh Armour for just 4+ armour for +5pts/model, which you might do if they are in a Venom or are deploying via webway portal.

One unit of Balestrikes starts at 5 models for 50pts and can go up to 10, but usually you’re paying at least +5pts on top of that per model for jetpacks, making it the 75-150pt range. Not bad, but not super cheap either.

In terms of weaponry, the Balestrikes come with lasblasters, plasma & shadowwave grenades (which they cannot swap for brace of pistols or splinter rifles), and then ANY model in the unit may take a heavy weapon at the points listed: 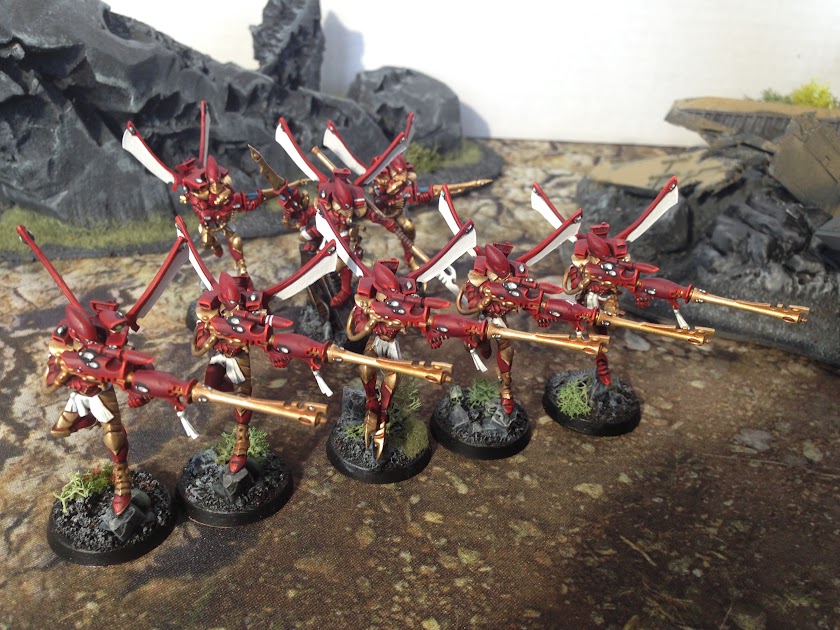 The classic and fluffy way to run Balestrikes is in a unit of 5 with jetpacks and Dark Lances, taking advantage of Relentless and jump-shoot-jump to add some decent backfield anti-tank shooting. If you don’t have first turn, they can easily Deep Strike in and play the same shenanigans, making them pretty reliable for 1-2 turns of shooting. You would never want to take Balestrikes over a Warp Hunter in your Sky Burners Coterie though, so most likely they will be rolling regular Reserves and scattering the full 2d6” – but for this unit’s purposes that should be fine. The biggest drawback of this strategy is the fact that they cost about 135-150pts for 5 models rocking t3 and 4+ armour, so even empty drop pods are a major threat to them. Playing on boards with enough LOS-blocking terrain they will do pretty well, but in my experience they pretty much never survive a game. The other drawback is that 4-5 s8 ap2 lance shots out to 36” with BS4 is just not as scary as it used to be – you may kill a Rhino, but not guaranteed, and 135pts is a hefty investment at that point. Scourges with haywire guns look more promising, especially rocking 12” jump moves. But yes, for the fluffy Corsair, these will do the trick and are a cool unit to play.

What really looks promising to me is the fact that these guys can take shuriken cannons for cheap, which are already assault weapons so you don’t even need Relentless. A unit of 5 Balestrikes with 5 shuriken cannons is 100pts, not the cheapest unit in the world (and will definitely die next turn), but what I would do is put them in a Venom with dual cannons as well, Scout, Outflank, or Deep Strike into position, then let rip with 24” bladestorm madness for a turn or two. Thanks to the GW FAQ, Venoms can still jink and let passengers shoot at full BS, so you can take Venom-spam to the next level with shuriken Balestrikes. 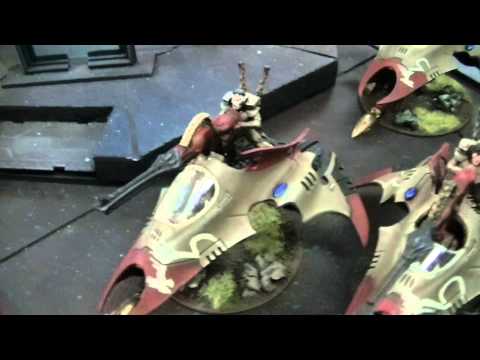 The other tactic with this loadout is to walk them on from Reserves via Multiphase Key Generator, which is a template deployed by a Corsair character wherever he or she is on the board. 5+ shuriken cannons walking on and shredding some unsuspecting peeps is never a bad thing, and you have the choice to walk on via your board edge or the portal which is solid. Then use those Reckless Abandon moves to get out of LOS or at least into cover, because your Balestrikes will be marked for death!

Like all Corsair units, Balestrikes can fall into the trap of becoming way too expensive for their usefulness versus their resilience, i.e. whatever you do they will die in a single turn of shooting. 4+ armour versus 5+ armour really doesn’t make a huge difference when the unit itself is only 5 models at t3, so the main thing is whether they are in range/LOS or not. Sadly the Balestrikes do not have sufficiently long-ranged weapons to play the range game very well (missile launchers have an extortionate price and are not very good, dark lances at 36” are just not quite long-ranged enough in my experience). Instead you have to hope for the perfect piece of LOS-blocking terrain in the middle of the board, or just accept that your Balestrikes are a suicide unit and keep them cheap. Shuriken cannons on foot-slogging troopers has been a pretty effective solution, and if you do want to invest a bit more then crank it up to 10 models for 200pts, add in a Baron with Shadowfield, maybe an allied Farseer for Shrouding or some other defensive powers, and have a real party with 30 shuriken cannon shots!

Corsairs are a finesse army and a lot of fun to play – Balestrikes embody this more than most, due to their bang and die nature, and given that they are not terribly cheap. For those with old Corsair heavy weapons models on the shelf, Balestrikes are a great way to get those cool figures on the table and provide some use – but for those thinking to buy the FW upgrade kits and make a unit of Balestrikes from scratch, you would probably do better investing in the Reaver kits paired with Cloud Dancers and Wasp Walkers for a blend of cheap drop-fusion AT firepower, and janky s6 shooting. Last but not least, given that Balestrikes compete for a Heavy Support slot with Warp Hunters makes them a very clear second place option – make sure to get a Warp Hunter first!